Where to Watch: 2019 CFL Broadcast Schedule 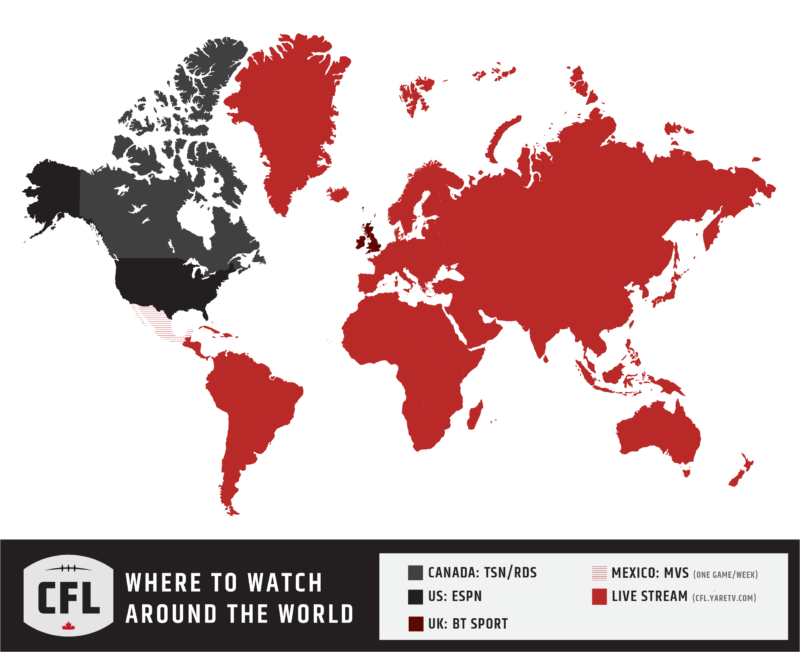 ESPN networks and ESPN+ will combine to present every CFL game live in 2019 as part of a new, multi-year, exclusive U.S. rights agreement.

| For ESPN and ESPN+ schedule click here  | How does ESPN+ work?

*Note: All games not listed below can be found on ESPN+

Viewers in the UK and Ireland will once again be able to follow the action on BT Sport.

| For a full listing of MVS’s Game of the Week and how to access in your region,  click here.

Every game, including the 107th Grey Cup presented by Shaw in Edmonton, and featuring the SiriusXM Kick-Off Show, will be available live to SiriusXM subscribers via satellite and streaming on Canada Talks (ch. 167). French language broadcasts of Montréal Alouette games can be heard on Influence Franco (ch. 174).

International viewers outside of TSN/RDS/ESPN/BT Sport territories can now stream CFL Game Pass and have access to all games this season. CFL Game Pass allows fans three different packages; a season pass for $79.99 USD which includes playoffs and Grey Cup, A team pass for $36.99 USD which allows you to watch your favourite teams games or a single game pass which allows you to watch a game for $2.99 USD. For CFL kickoff, all Week 1 games are free to watch by registering here.