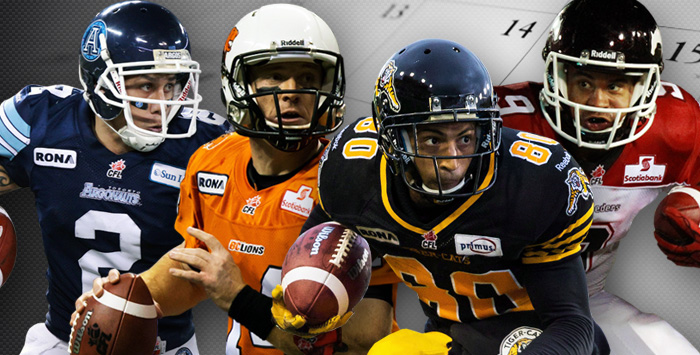 TORONTO – The next 100 years of great Canadian football kicks off Thursday, June 27th when the Winnipeg Blue Bombers unveil their beautiful new stadium at Investors Group Field by hosting the Montreal Alouettes.

“Our future starts here,” said Mark Cohon, Commissioner of the Canadian Football League as its 2013 schedule was released today.

“It features great young stars playing our exciting, wide open game in modern venues.  It offers a fan experience that is truly second to none. And it’s something that we are absolutely thrilled to get started.”

Highlights of the schedule include:

•  The 101st Grey Cup Championship is in Regina, Saskatchewan on Sunday, November 24.

•  The Toronto Argonauts launch their defence of their 100th Grey Cup championship at home against their archrivals, the Hamilton Tiger-Cats, on Friday, June 28, in a match-up of two of the league’s most exciting returners and receivers, Chad Owens and Chris Williams.

•  Later that same evening, two of the league’s top young quarterbacks match up when Drew Tate and the Calgary Stampeders open their season at home against Travis Lulay and the BC Lions, in a rematch of last year’s Western Final.

•  The CFL returns to Atlantic Canada on Saturday, September 21 for NAPA Touchdown Atlantic, featuring the Montreal Alouettes “hosted” by the Hamilton Tiger-Cats in Moncton, New Brunswick.

•  The Edmonton Eskimos, including their new quarterback Mike Reilly, host the Canadian Football Hall of Fame game on Saturday, October 5 when the Montreal Alouettes and legendary pivot Anthony Calvillo come to town.

•  Rivals collide when the Saskatchewan Roughriders host the Winnipeg Blue Bombers, and the Calgary Stampeders host the Edmonton Eskimos, on Labour Day Weekend.

•  The final four weeks of the regular season feature only divisional match-ups, making for an exciting run to the playoffs.

•  On Thursday, June 20, the Argos return to historic and hallowed ground when they host their preseason game with the Alouettes at Varsity Stadium at the University of Toronto.

•  Week 17 (October 18-20) and Week 18 (October 24-26) the CFL turns PINK once again, with all eight teams hosting special games as our teams and fans raise awareness of women’s cancers.

•  The Tiger-Cats welcome the Argos to their 2013 home field at the University of Guelph on Thanksgiving Monday, October 14.

The brand new stadium in Hamilton that the Tiger-Cats will call home starting in 2014 is currently under construction. In the meantime, the Tiger-Cats will play eight home games at the University of Guelph, all on weekends or holidays to accommodate fans travelling from Hamilton.

A revamped stadium is also under construction in Ottawa, as part of a redevelopment of Lansdowne Park. It is to be home to an expansion team in the nation’s capital starting in 2014. A new stadium in Regina, Saskatchewan is scheduled to open in 2017.

“This is going to be an incredibly exciting time for the CFL, as we build on the momentum of the celebration of the 100th Grey Cup in 2012, by launching the next 100 years of great Canadian football,” Cohon said.