Dunk: The rebuilding of a Grey Cup-winning defence 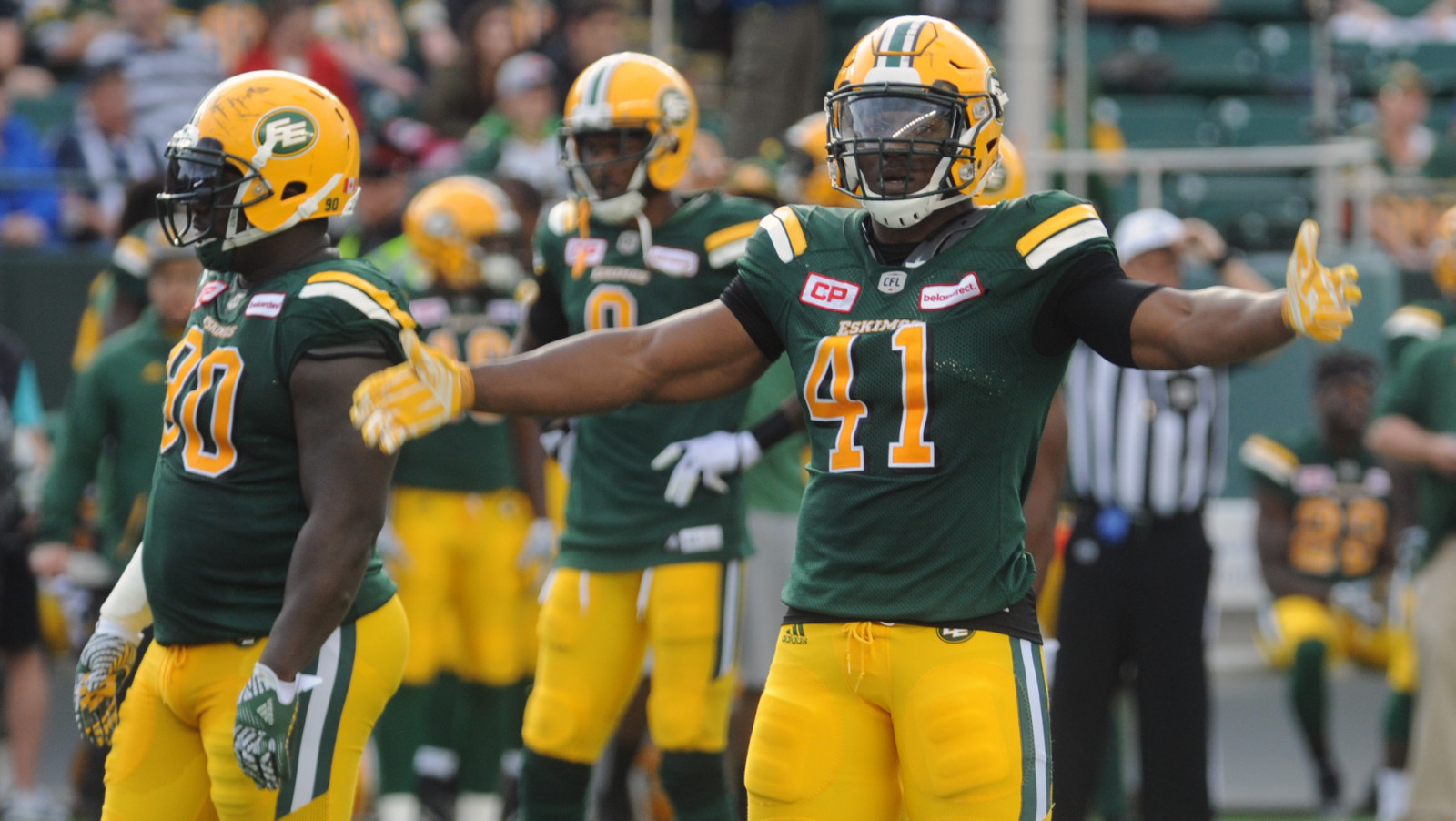 Dunk: The rebuilding of a Grey Cup-winning defence

The Eskimos unit that ranked No. 1 in many important defensive categories a year ago lost five starters by the time the defending Grey Cup Champs kicked off the 2016 season along with the man coaching that ‘D’ in Chris Jones.

One starter from each level of the unit earned NFL contracts – defensive lineman Willie Jefferson, linebacker Dexter McCoil and defensive back Aaron Grymes. Another, strong-side linebacker Otha Foster, followed Jones to Saskatchewan. And 2015 CFL All-Star cover man John Ojo went down with a season-ending Achilles injury in training camp. Those happenings left five large spots to fill on the field and one on the sidelines.

After taking a season off from coaching, Mike Benevides returned from a broadcaster role with TSN – he educated viewers every time you watched him – to coordinate Edmonton’s defence as part of Jason Maas’ new green and gold staff. The 48-year-old coach has been tasked with teaching his system to veterans and getting young CFLers ready to play quickly.

“You feel good about men that get other opportunities that go elsewhere either to help their families financially or chase their dreams,” Benevides says. “It’s about who is going to replace those guys.”

“I always look at that as a great opportunity to find out who the next stars are going to be. There are all these stars that have come through our league and nobody knew who they were at one time.”

Benevides deployed six different starters in Week 1 than what Edmonton lined up with last November in Winnipeg. Marcus Howard, who started 12 games last season and recorded six sacks, made the jump to full-time starter up front. Kenny Ladler earned the strong-side linebacker duties. Deon Lacey went from special teams demon and situational defensive player to playing every down at weak-side linebacker. Deion Belue slots in at strong-side halfback. Veteran Cord Parks was brought in to play field corner. And Neil King won the safety job with an impressive training camp.

“For me, coming in here and speaking to all the veterans, it was about finding ways to make them comfortable,” Benevides says. “There’s a lot of stuff they did before that we’ll do and some new stuff. It’s an amalgamation of conceptual thoughts because I believe in a lot of the things Chris [Jones] believes in.”

Benevides’ goal is to have a cohesive unit that communicates, runs fast to the football, plays with a relentless attitude and makes sure that they’re disrupting the quarterback in various ways, whether that’s done by blitzing or playing outstanding coverage that opposing pivots can’t deal with or comprehend.

“There are all these stars that have come through our league and nobody knew who they were at one time.”
Mike Benevides

And Edmonton’s defensive scheme likes to be multiple. That’s because it’s a small league where offences can get to know opposing defences quickly if you’re not changing it up. Looking back at stingy BC defences when Benevides was on the left coast, his groups were always mixing and matching. That said, Benevides’ background as a defensive coordinator – there’s a lot of different ways to go about it – focuses on generating a consistently strong rush from the front four.

“You’re a great defence when you can rush four and win games that way. I want to play to the strengths that they have here, and that is the front with Odell, Howard and Sewell,” Benevides says.

As Edmonton relies on the proven playmakers to carry the load there are high expectations for the green starters. Benevides knows he needs to teach, develop, grow and put the youngsters in positions to let their talent takeover.

“We’re going to have to grow up real fast,” the Eskimos defensive guru says.

A learning opportunity happened in Week 1 when a mistake was made in coverage and REDBLACKS receiver Chris Williams capitalized on the error with a 71-yard touchdown. That energized the Ottawa offence. 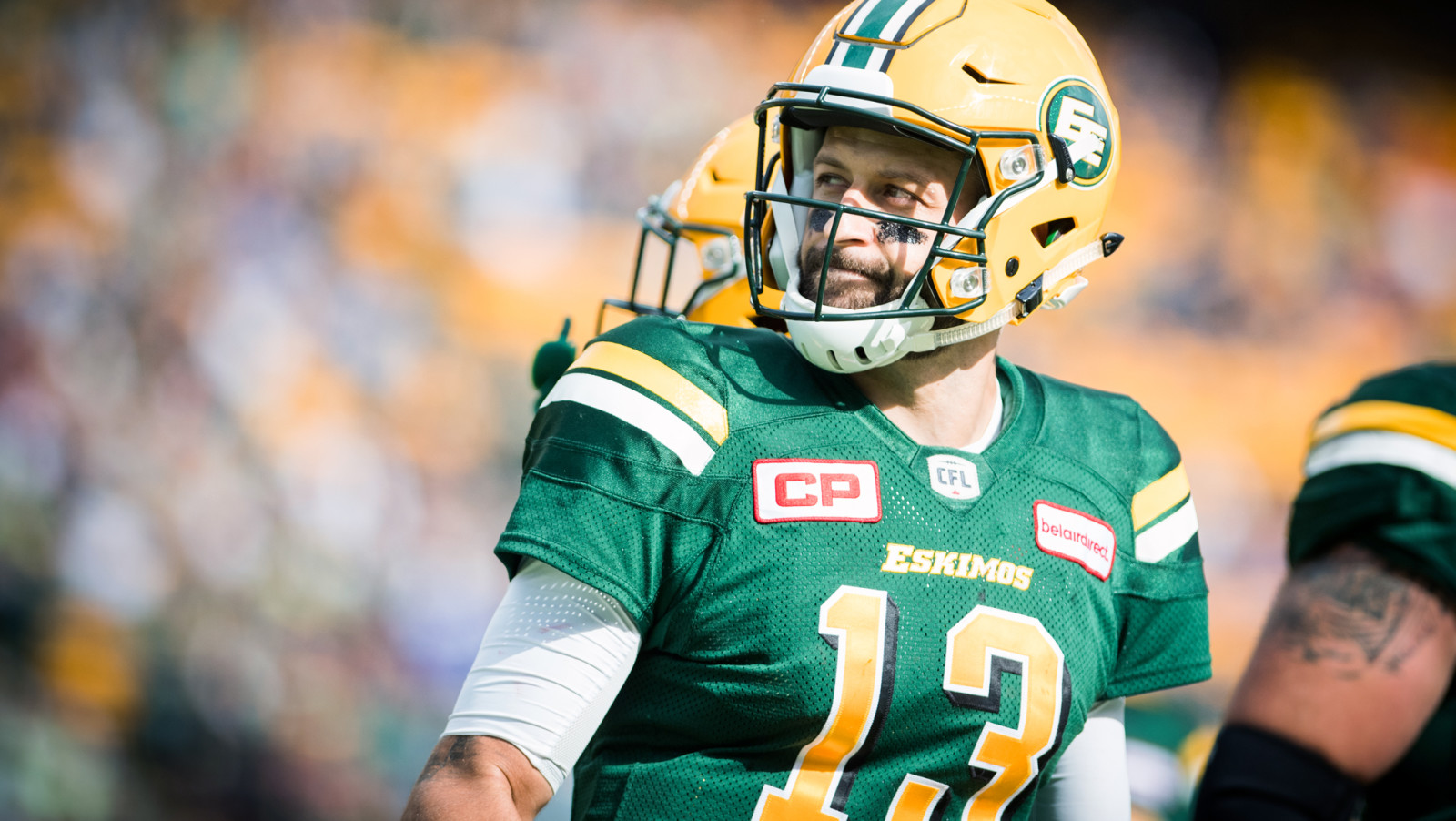 “That one was a young corner not playing the assignment. It’s correctable, fixable and we can’t let that happen again,” Benevides says. “For me it’s about not giving up explosive plays and now that it’s real some of these young guys have to step up and get it done.”

As Benevides molds fresh talent he’s staying patient because every current defensive stalwart in the league began as a wide-eyed rookie. Ladler and Lacey, who each made their first CFL starts on defence against Ottawa and were identified as outstanding athletes by the Eskimos defensive boss, were two men that made an impression. No. 40 led the Eskimos with nine tackles and No. 37 racked up seven stops, two more on special teams and recovered a fumble.

“All the guys across the league that are known names, they had to go through the learning curve too. Once they come out of that and they learn our game they really shine,” Benevides says.

“There are definitely some guys here that are talented that can be that next rookie that becomes an All-Star.”