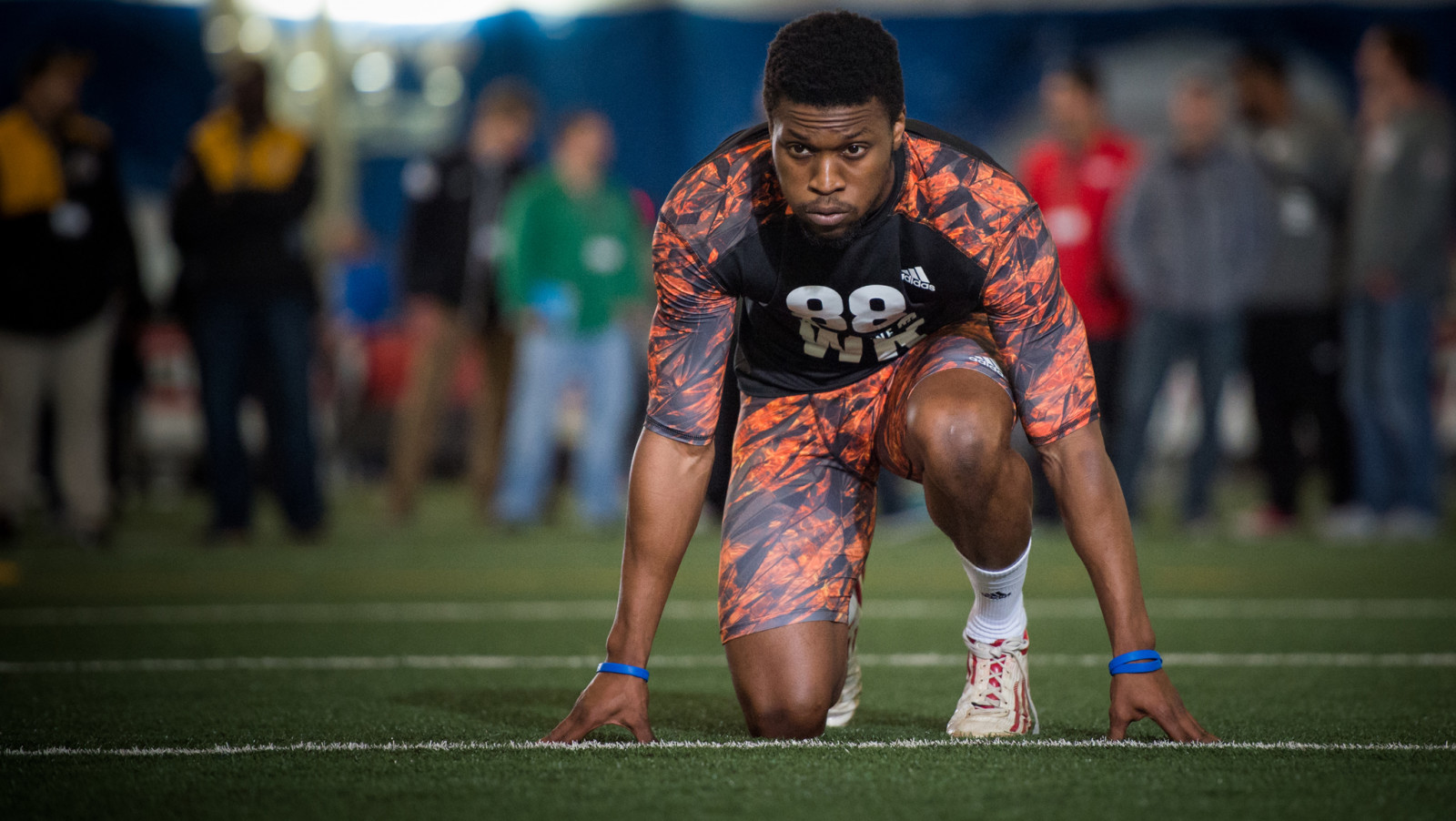 Sometimes all a football player needs is an opportunity.

One chance to prove their worth and to showcase their talents to demonstrate why they should be on scouts, coaches and general manager’s radars come draft time.

Regional combines give players just that – an opportunity.

The Canadian Football League has three regional combines taking place this year – the Eastern Regional, Ontario Regional and Western Regional – giving Canadian prospects a chance to show off ahead of the 2017 CFL Draft.

Do well at your regional combine and either get an invite to the national combine – this year’s CFL Combine presented by Adidas will take place during Mark’s CFL Week in Regina later this the month – or hope that someone took notice of your efforts.

“There were a few guys in my year I remember that were invited from the regional to the national and some that weren’t that did get drafted and went on to have very successful careers right now within football,” Ottawa REDBLACKS receiver Scott Macdonell, who wasn’t originally invited to the national combine in 2014, recalled. “I think it just comes down to exposure.” 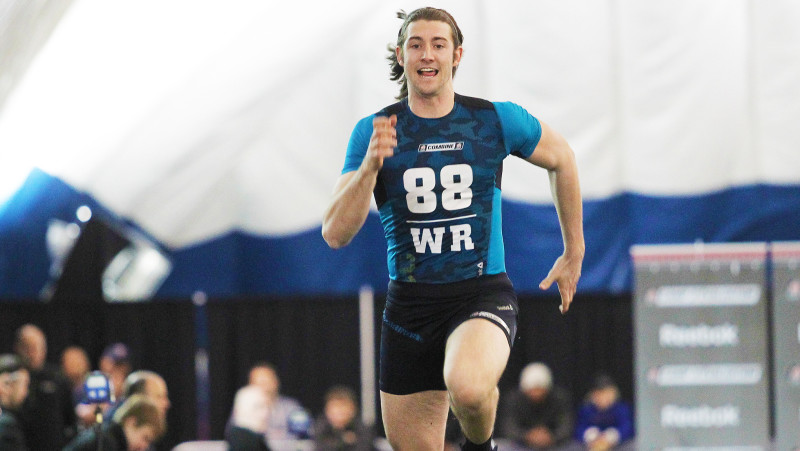 Scott Macdonell participates in the 40-yard dash in the 2014 CFL Combine (CFL.ca)

Macdonell participated in the 2014 Toronto Regional Combine and caught the eye of scouts, earning himself an invite to the national combine that year. He was drafted by the REDBLACKS in the second round, 13th overall and has since re-signed with the club through 2018.

“I think being a big body receiver, that obviously interests the coaches. I did pretty well on my 40 time so that obviously helped my stock,” Macdonell recalled of why he was one of the elite to move on from the Toronto Regional in 2014. “Showing that I’m pretty fast and that I can actually move well for a big guy (also helped).”

Getting an invite to the national combine can be anything but comforting – think of it like a job interview. Athlete’s resumes consist of stats and highlights from their college careers that gets looked at before the interview – the combine – where they participate in the 3-Cone Drill, 40-Yard Dash, Bench Press, Broad Jump, Short Shuttle and Vertical Jump. Just like interviewing for a job, they have to prove why they’re the right choice.

So when the 6-foot-5, 220-pound receiver had the chance to do the whole thing twice, he felt a sense of relief getting in a little extra practice.

“Any time you get to do a test twice you usually do better on the second time than the first time,” Macdonell admitted. “That definitely plays into it.”

Last year, 17 players from regional combines were invited to the CFL National Combine, including BC Lions receiver Shaquille Johnson, who first participated at the event in Toronto.

Johnson was the CIS rookie of the year in 2012 – breaking Andy Fantuz’s CIS rookie record of 57 receptions with 61 of his own that season – but after some personal issues, he fell off the radar and all the way down to the Canadian Junior Football League’s London Beefeaters. He was unranked on the CFL’s Scouting Bureau list and didn’t receive an invitation to the national combine.

So the Brampton, Ont. native made the most of his opportunity too, sprinting to a 4.39 40-yard dash time (the second-highest electronic time recorded at a CFL combine), and turned the heads of numerous CFL scouts.

The performance earned him a spot at the national combine and he was later drafted that May in the fourth round, 32nd overall by the Lions.

“The regional combines are crucial to guys I define as hidden gems,” CFL.ca’s Marshall Ferguson said of their importance. “Those who might not have the greatest on field production due to injuries or loaded depth charts but have the ability to play and need the chance to show scouts why they are worthy of an opportunity.” 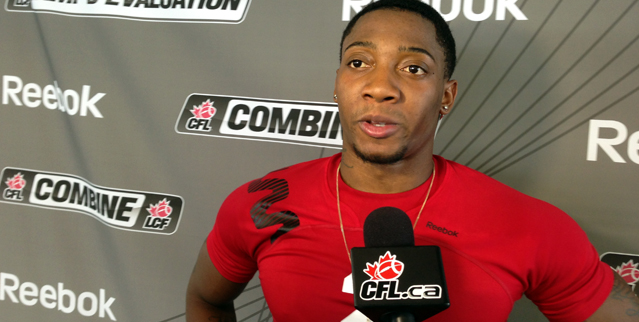 Jermaine Gabriel answers a question after a combine in 2013 (CFL.ca)

Someone else that needed the chance to prove they were worthy of an opportunity was Toronto Argonauts defensive back Jermaine Gabriel.

Gabriel made last-minute plans to attend a regional combine in Edmonton in 2013 – the first year that the CFL held regional combines. That year Gabriel was working as a construction worker and was a member of the CJFL’s Calgary Colts, waiting for one last chance to pursue professional football.

“All I knew was that something came up, something was going on and they were hard times,” recalled Gabriel in an interview with CFL.ca in 2016. “But at the same time I knew I needed to go to the combine to put myself back on the map.

“I knew that if that’s the road I wanted to take, I would have to show up at this combine no matter what.”

The 5-foot-10, 199-pound Scarborough, Ont. native did show up, and he did it in a big way. Gabriel impressed scouts so much that he earned an invite to the national combine and was drafted by the Argos that year in the second round, 17th overall.

This year, when the first of three regional combines gets started in Montreal on March 10th, there will be a new crop of hopefuls searching for their own opportunity to shine to make the jump to the CFL.

“Regional combines are just good for players and coaches and scouts and anybody in football,” said Macdonell. “The more players you have getting those opportunities, the stronger the league is going to become.”