Stamps, Flutie turn the clock back to 1992 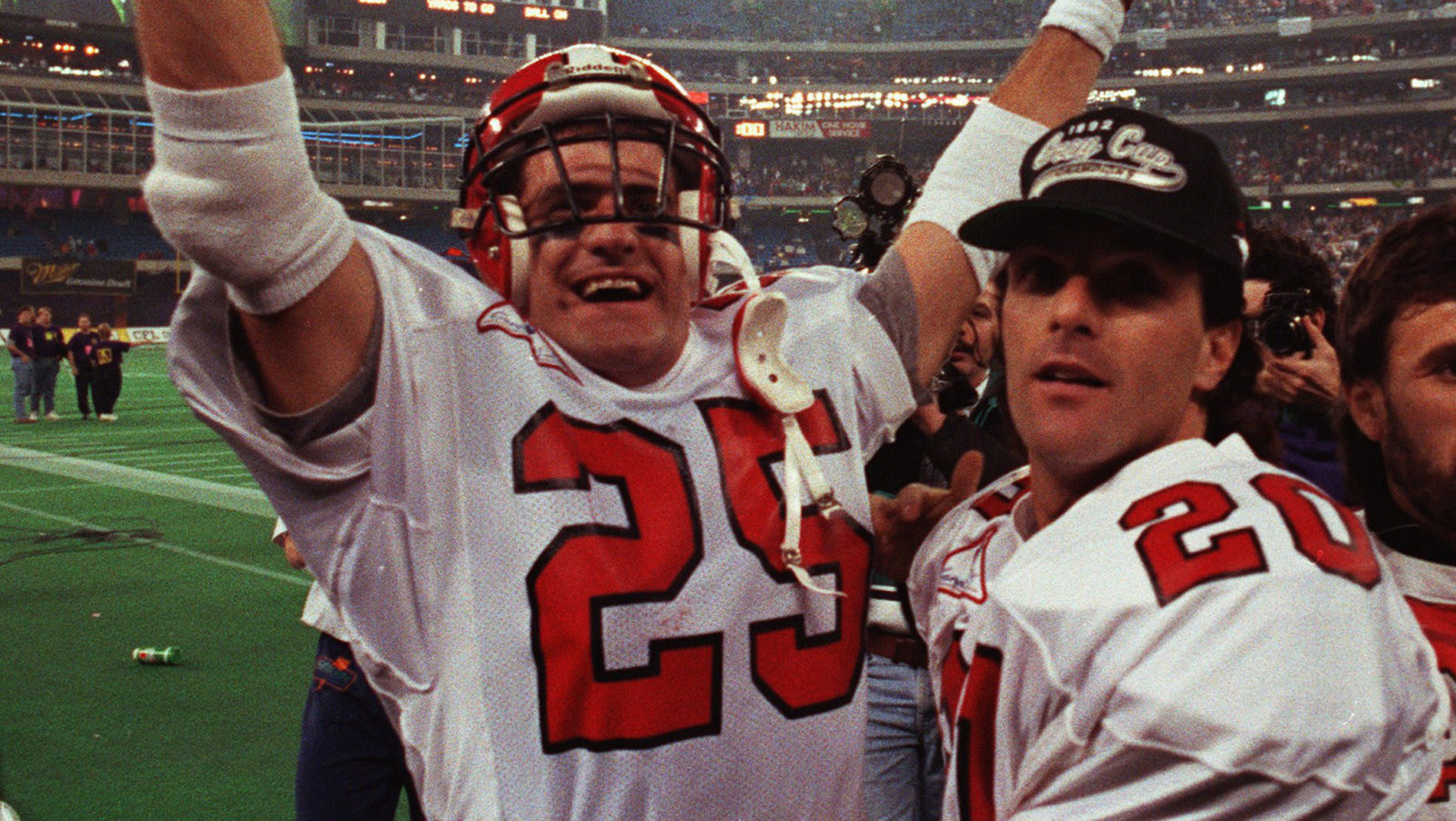 Stamps, Flutie turn the clock back to 1992

Twenty-five years drift away in the blink of an eye as Doug Flutie thinks back on Nov. 29, 1992.

“I’ve never been what you’d call great at celebrating, at enjoying the moment, you know?’’ the man selected by a TSN poll as the CFL’s greatest-ever player is saying, standing in the entryway Thursday to his old (if refurbished) dressing-room digs at McMahon Stadium.

“I’d come out of the game. We had it. There were a couple minutes left. I’m standing on the sideline with Sponge (Dave Sapunjis).

“We walked behind our bench, faced our crowd. Like: ‘Yeah!’

“I remember that moment as if it was yesterday. The two of us with our hands in the air.

“That’s when I got emotional. It had been a stressful year for me.

“Remember, the Calgary Stampeders had reached the Grey Cup the year before. I didn’t. And Danny Barrett was a darn good quarterback. Then I come here and suddenly there’s this expectation of winning it all.

“So there was pressure. I felt like we had to win. There was no other choice.

“Then to be there, in front of our fans, that way …

That moment at SkyDome, the 24-10 Grey Cup-clinching game against Winnipeg, scripted the perfect ending to a year that had started with Flutie signing here as a free agent out of BC.

“Coming to Calgary was, for me, a perfect storm,’’ says Flutie, now 54, looking tanned and fit and eager to enjoy his return to celebrate that Grey Cup victory. “You look at the explosive, big-play guys we had on offence. Allen (Pitts). Sapunjis. Carl Bland. Pee Wee Smith.

“And I was so lucky to have Huff as my offensive co-ordinator. In this league, at that time, there were coaches. And then there was Huff.

“Huff was a cut above.

“He’d been a great quarterback himself in the league. He elevated my game. The guys around me were talented. And we had a good defence.

“I couldn’t have asked for more.” 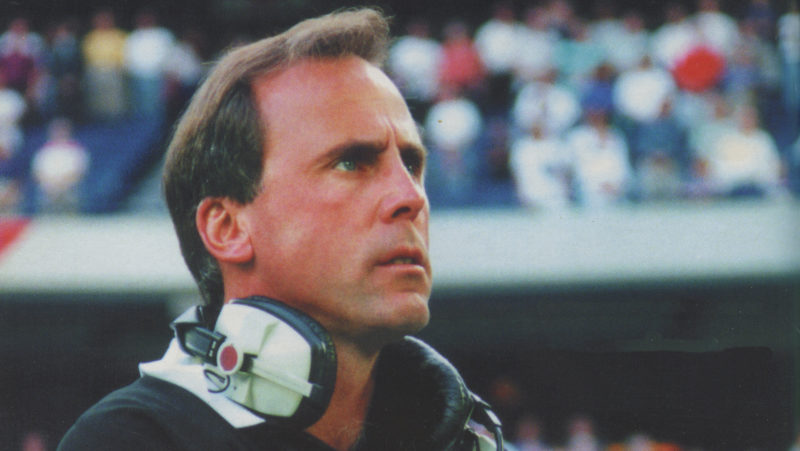 A man who’d go on to join him among the Stampeder quarterbacking greats, Dave Dickenson, remains an unabashed Flutie fan.

“I was actually supposed to be going to Toronto my first year up here and then Doug (went to Toronto),’’ the now Stampeders head coach confesses.

“Well, that changed things for me.

“So we wanted a trade to another team. And I actually got traded to Calgary, where they had another pretty good guy waiting in (Jeff) Garcia.

“I felt Doug was perfectly suited to the CFL. Very creative. A trendsetter. He didn’t go by the standard. He didn’t want to be put into a cookie-cutter. He wasn’t worried to make a mistake.

“He was a sandlot guy. Used to make stuff up.”

After being two ships passing in the night for Toronto, the two did eventually become teammates in the NFL, at San Diego in 2001.

“There, I got to know him a little better. He’s just a great guy. I think he’s the best-ever player in Canada, for sure. Loves to be around the guys. Loves sports in general.

“Loves music, too. I remember he used to have his drums going at training camp in San Diego.

“For me, it was just fun to be around him and learn from him.” 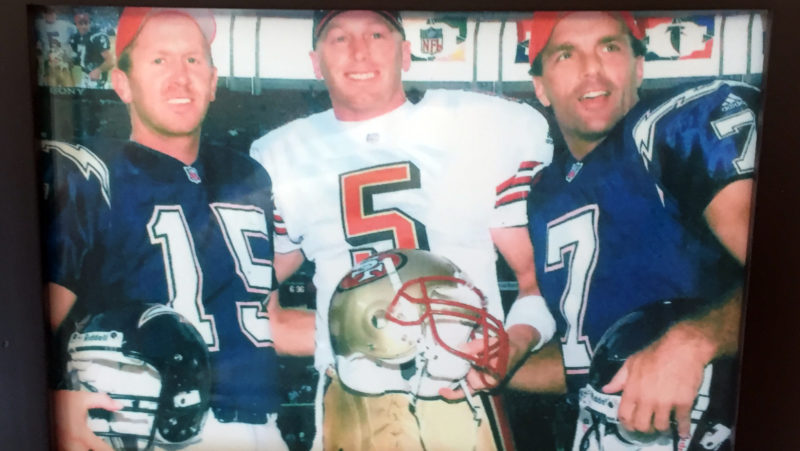 Everyone on both sides of the border, it seems, has a favourite Flutie moment.

That iconic Hail Mary for Boston College to slay Miami that launched the Magic Flutie into superstardom occurred six years before Bo Levi Mitchell was born in Katy, Tex., for instance, but that doesn’t mean it isn’t ingrained in his football-loving life.

“Oh, I’ve seen that play lots,’’ laughs Mitchell. “Lots. I mean, who hasn’t? You watch any all-time college highlight package and it’s there, right at the top of the list.

“Doug Flutie was one of those guys that created the roll-out on the Hail Mary, sat in the pocket, found a way to get out of it and then put the ball up for a receiver to go get.

“It’s just one of those iconic plays. And especially with him wearing No. 22. I mean, man, that is not a quarterback number, right? But he was always the best player on the field so who was gonna argue?

“I’ve studied a lot of film – and I’m not trying to hurt anybody’s feelings here – on the ‘old’ cats. The guys that shaped this game for us.

“Dave and Doug, they both played with so much passion. What I see in those two that’s very similar is how they hit every single play downhill. 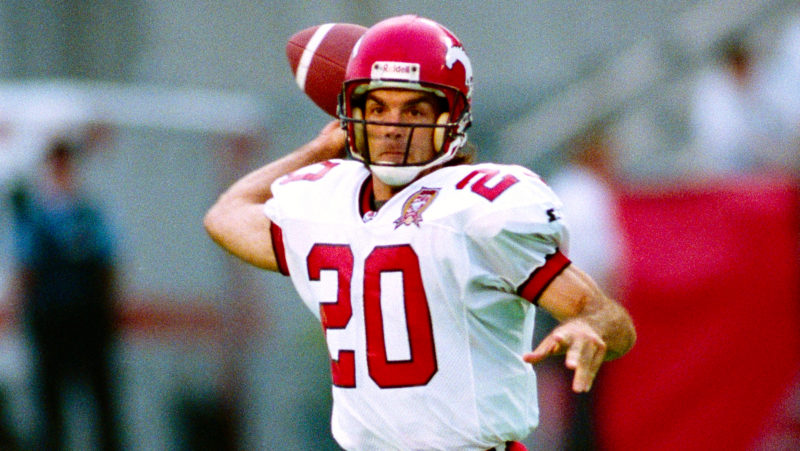 Hufnagel, the mentor, was in his third year as offensive co-ordinator during that touchstone ’92 season.

“Doug,’’ he says, “is ultra-competitive. He’ll do everything he can to beat you in a game of tiddlywinks.

“With that compete level, his unique ability, vision, elusiveness, he was what people now call ‘the package.’ ”

As the latest in a long, rich heritage of standout Stampeder QBs, Mitchell understands – embraces – the attendant excellences of the past.

“Absolutely. There’s a very high standard for quarterbacks here. That’s something that drives everybody who comes to Calgary and plays the position.

“We know we have to show up on game day, lead the team, be the face of the team but at the same time not be bigger than the team.

“None of those guys – Doug, Dave, Henry (Burris), Huff, Jeff, the rest – have ever thought they were bigger,” he said, his gazing takes in a panoramic view of an empty, quiet McMahon Stadium, “than this place.

“No one’s most important than The Horse.

“But having guys like Doug Flutie as models, as examples, I know that pushes me to take my game higher.” 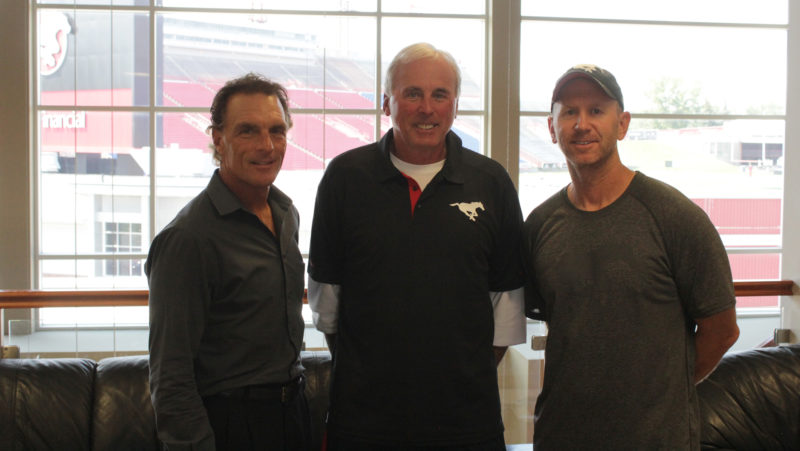 Twenty-five years later, that model, that example, returns to a familiar haunt to help celebrate an important moment for him, friends, a city and a franchise.

“Yeah, it’s got a little of that visiting-the-old-neighborhood feel,’’ admits Flutie, on the lookout for long-serving equipment manager George Hopkins.

“I dunno, maybe it’s just a football thing. But you rewind 25 years and the stories, everyone’s demeanours, their personalities … it’s all the same. It’s like travelling back in a time machine. It’s a fit.

“Such a cool thing.

“You can go 10 years, 15 years, without seeing each other, jump back in and not miss a beat.

“When you go through what it takes to win a championship – a lot of work, of sweat, of tears – that whole emotional process, that feeling, that kinship, lasts forever.