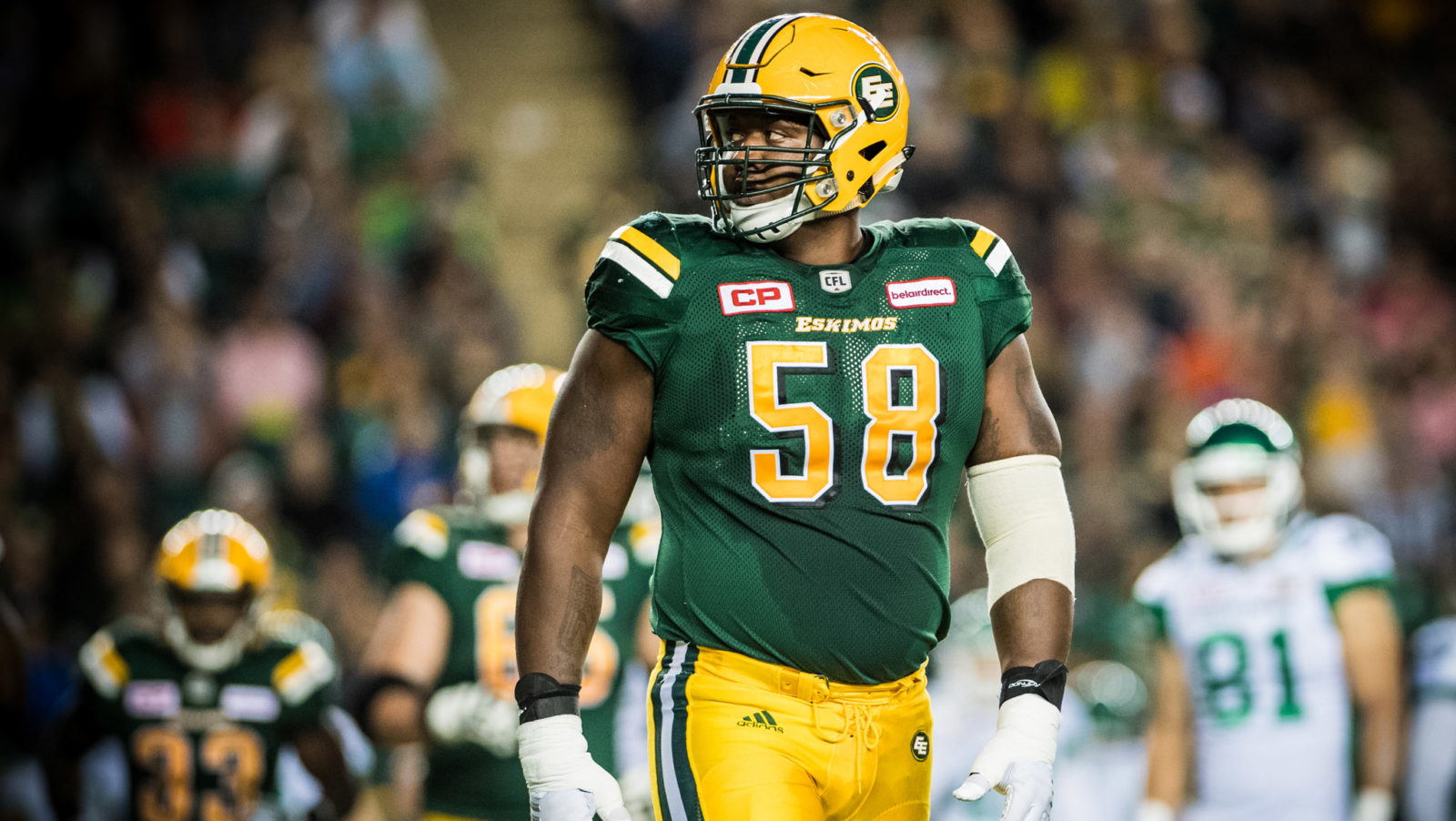 As Tony Washington approaches after an extra-long Wednesday practice with his new team, the beads of sweat across his forehead threaten to rain all the way down on you from their six-foot-seven perch.

A Hamilton Tiger-Cat for all of two days at this point, he’s getting a fast-forward crash course with his new team and it’s clear that everything feels new and kind of weird for him. The No. 58 that he wore in Edmonton the last three-plus seasons is now 66. On the field, his practice jersey was missing a nameplate across the back. When he talks about his new team, “we” or “us” doesn’t effortlessly flow out yet. That stuff will come, he knows that.

“Football-wise, it’s football. It’s not that hard at all,” he says.

It’s the rest of it that he knows will be tough.

RELATED:
» Buy Tickets: Winnipeg at Hamilton
» Lolley: ‘We’re going to be all right once we get going’
» Ferguson: The game within the game 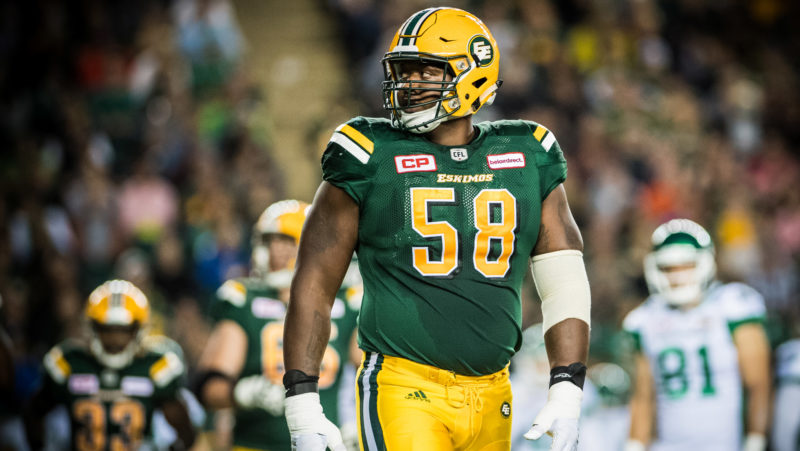 Tony Washington joins the Tiger-Cats after being released from the Esks just a few weeks ago (Johany Jutras/CFL.ca)

Last December, Washington signed a three-year extension with the Eskimos. On Sunday, after the Eskimos improved to 6-0 with a win over the Tiger-Cats, Esks’ GM Brock Sunderland released Washington. With the Ticats in need of some help on the offensive line — they’ve surrendered 15 QB sacks this year and have allowed a league-worst 57 pressures heading into Week 8 — they quickly snagged him.

Over the course of a day, Washington went from a 6-0 team to a 0-6 one. He threw some things together, left his home and wife, Kerri, in Edmonton and flew across the country. It’s not what he expected when he put his name to that contract almost eight months ago.

“It’s been crazy,” Washington says, laughing about the quick turnaround. “I know it’s a part of the business, but the older I get, I have my wife now. Moving around like this is not ideal. It’s been pretty nuts. Very unexpected.”

If he’s bitter about going from the top of the CFL standings to the bottom, Washington hides it well. He’s adjusting to his new surroundings and sees opportunity, despite Hamilton’s record and a tumultuous week that saw defensive coordinator Jeff Reinebold replaced by Phillip Lolley and June Jones brought in as a new assistant head coach.

“You know what, the sky’s the limit, still,” he says. “On one end, it is (going from) a 6-0 team to an 0-6 team, it’s kind of hard. But every time we played this team when I was in Edmonton, our coach stressed that we couldn’t sleep on these guys. They have a lot of talent and some really good players.

“My biggest thing coming here was they have a really great quarterback. This league is a quarterback-driven league and having that and me being able to add to the offensive line and helping those guys out…they’ve got some guys coming back on defence and I think they’re going to turn things around. And they’re (playing in the East Division). There’s so much upside. You can’t count us out yet.”

Washington will get a chance to make an impact right away. A starter in 74 of his 75 CFL games played, he says he was told he’ll get the start on Saturday when the 4-2 Winnipeg Blue Bombers come to Tim Horton’s Field. It’s another quick turnaround, but seven years, three Grey Cup rings and now four teams in, Washington says he can be ready.

“I’ve been in so many different offences that it’s similar to what I did in Toronto, to what I did with (offensive coordinator Steve) McAdoo (in Edmonton). The nuances are kind of similar,” he says. “I haven’t picked up everything yet. The terminology changes. You pick the terminology up, the scheme stays the same.”

“This league is a quarterback-driven league and having that and me being able to add to the offensive line and helping those guys out…they’ve got some guys coming back on defence and I think they’re going to turn things around.”

What will take time for him, he says, is the new address. Edmonton was the longest stay of his career and he’d made a big effort to become a part of the community there. Washington was always easy to spot in downtown Edmonton over the last few years, tall and barrel chested, always wearing a green Eskimos’ t-shirt.

“All the time. I was always out in the community with my Edmonton stuff on,” Washington says. “I was always in the community doing stuff, for sure. Getting the phone call to leave that place, I was settled in, I dug in. Now we’ve got to move all the way out here and not knowing the situation or how it’s going to pan out. It’s just another situation that’s just kind of … uncertain.”

The one constant through the bulk of his CFL career has been his wife, Kerri. They met when he played for the Argos in 2012 and were married in 2015. She’s followed him from Toronto to Edmonton and she’ll eventually join him Hamilton. Washington says he doesn’t want to keep her on the go anymore.

For now, Washington will focus on the field, on his new teammates and helping to turn things around in Hamilton. A win might be the first step in making him stop saying “they” and start saying “we.”