TORONTO — The Canadian Football League revealed its first edition of the Central Scouting today to which ranks the top-20 prospects eligible for the 2018 CFL Draft.

David Knevel, a Brantford, Ont. native, tops the September list. Knevel plays collegiately at Nebraska and is expected to start the season at right tackle for the Cornhuskers. Last season, the 6’9”, 315-pound tackle appeared in 10 games (started eight) and helped the Nebraska offensive line rank as the Big Ten’s best unit in protecting the passer. In his career, he has appeared in 23 games and was named an Academic All-Big Ten selection in 2016.

Connecticut Husky Trey Rutherford comes in ranked second on the list. The 6’5” 312-pound offensive lineman from Markham, Ont. played in all 12 games last season (starting seven) with the Huskies on an offensive line that helped the offence rush for 100+ yards six times and pass for 200 yards+ on seven occasions. Rutherford has appeared in 32 games and saw some time as a fullback during his sophomore season.

RELATED
> Analysis: Ferguson takes a deep dive on each player ranked in September’s CSB
> Watch: Who are the Top 5 prospects eligible for the Draft right now?

Ranked third is Bowling Green Falcons right tackle Ryan Hunter. Hunter, a native of North Bay, ON, appeared in and started all 12 games for the Falcons last season. He helped lead their running back to a 1,000-rushing yard season. Hunter has been named a Academic All-MAC player in each of his three seasons. For Bowling Green, Hunter has appeared in 40 games and started 26.

Laurier’s Godfrey Onyeka is the highest ranked U SPORTS player on the list. The defensive back from Brampton, ON was named a U SPORTS First Team All-Canadian in 2016 following a banner season where Onyeka recorded 40.5 tackles (35 solo, 11 assisted), four interceptions (one of which he returned for a touchdown), one forced fumble and one fumble recovery. He was also named a First Team All-Canadian in 2015 and an OUA All-Star Rookie in 2014.

Rounding out the top 5 is Calgary Dino offensive lineman Darius Ciraco. Ciraco, a 6’4”, 295 pound, Burlington, ON native, appeared in four games last season before missing time due to an injury. Ciraco also played in the 2017 U SPORTS East-West Bowl. 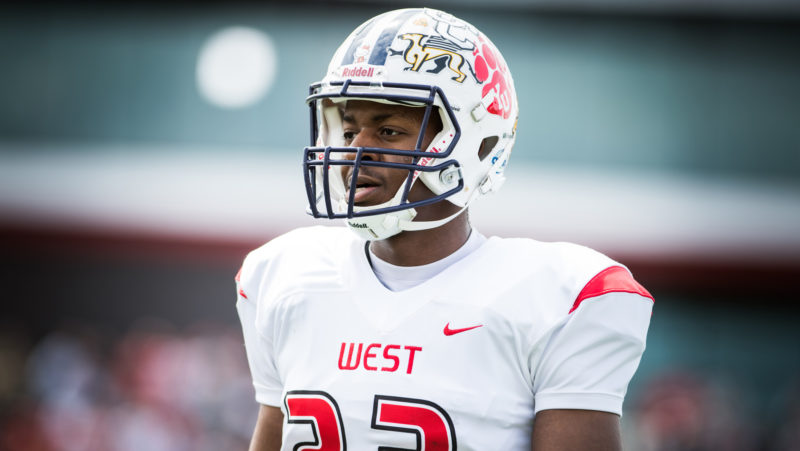 Godfrey Onyeka is the highest ranked U SPORTS player on the September rankings (Johany Jutras/CFL.ca)

A total of 16 schools are represented on the list, with Calgary, Laval and Montreal having multiple players on the list.