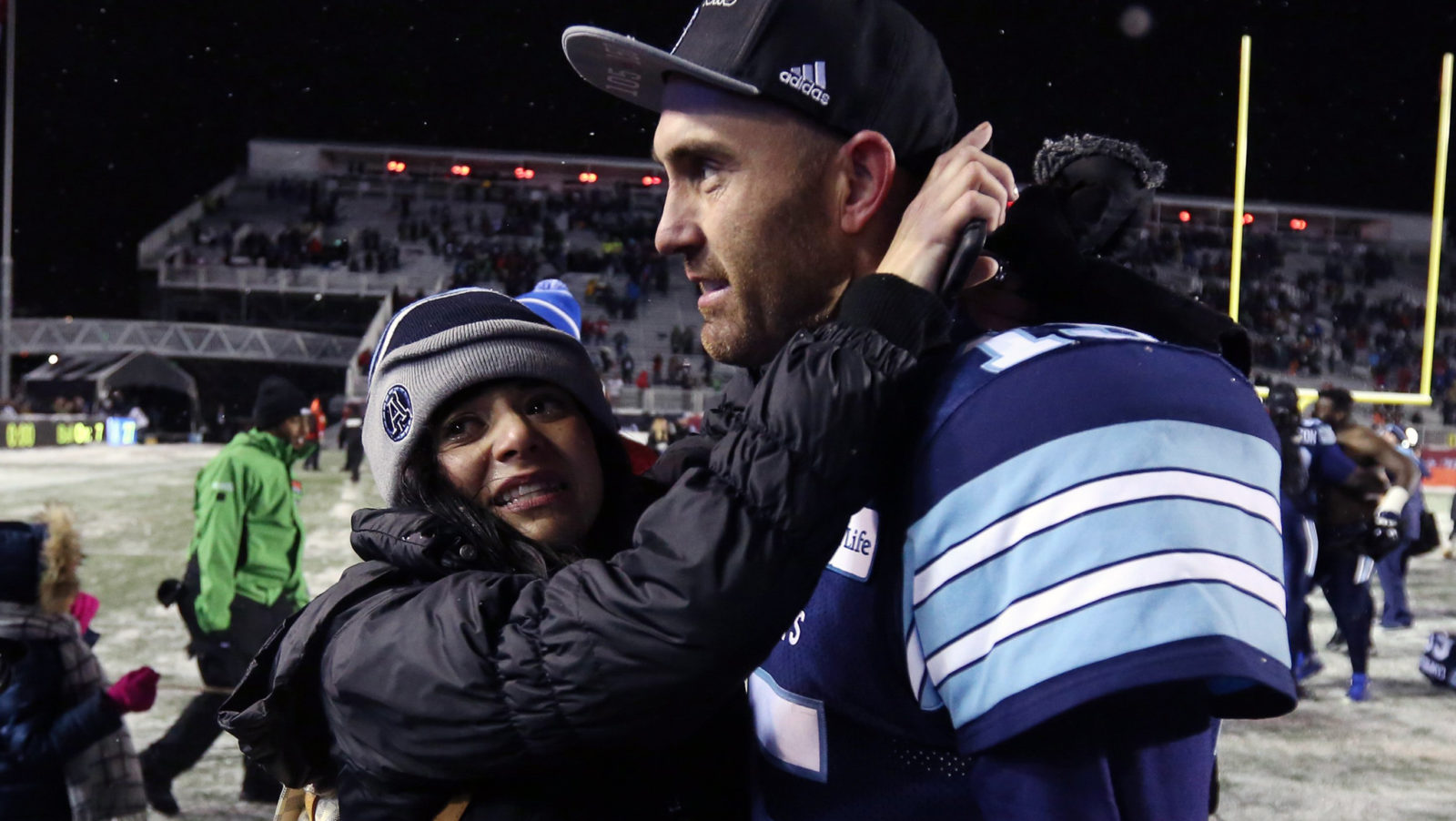 Toronto’s Ricky Ray sealed his legacy on Sunday and is now the most successful quarterback in Grey Cup history. Now, much like last year in very different circumstances, everyone is wondering what the future holds for Ray.

Will he do what so many athletes never get a chance to and go out on top? Or is there still some fire left in Ray for another CFL season?

It doesn’t happen very often, but this decision for Ray is one with no bad outcome. If he retires, then he joins guys like Henry Burris and Peyton Manning, who both called it a career after championship victories in very recent memory. If Ray isn’t ready for the next chapter, though, then that’s fine too, because that’s what’ll be best for him. The guy really can’t lose here.

More than anything else, Ray has emphatically earned the right to do whatever he pleases here. We’re talking about one of the most successful and prolific quarterbacks in CFL history. Ray has a record four Grey Cup rings with two different teams, numerous regular season marks, multiple all-star nods and a 2017 East Division MOP. If there’s one guy who doesn’t deserve even the slightest criticism, regardless of what he chooses, it’s Ray.

I’m a sucker for a feel good story, so seeing him go out on top would be pretty cool. Ray was already going to go down as one of the best quarterbacks of an era and, at least in my mind, of all time, too. But if you had some reservations on the latter, I’m not sure how you can anymore.

Ray has four Grey Cup rings! Other CFL greats like Doug Flutie, Jeff Garcia, Russ Jackson, Anthony Calvillo and Damon Allen can’t claim that. And Ray did it by engineering another game-winning drive after the Argos tied things up late in the fourth quarter. Sunday wasn’t his best game ever, but he made key plays when they mattered the most and walks away with the only thing that mattered: a win in the final game of the season.

It wouldn’t be such a massive shock if Ray decided to come back, though. Sometimes guys aren’t ready tor retire, regardless of whether there’s a storybook ending slapping them right in the face. Look at Calvillo, for instance, who had not one but two chances to go out on top. He didn’t though, and no one thinks any lesser of him as a result.

Remember, Calvillo and the Alouettes finally shook their ‘can’t win the big one’ reputation with Grey Cup wins in 2009 and 2010. Both times Calvillo was asked about his future, and both times he said he needed to think about it. He came back and played three more seasons and didn’t get to go out on top. Last I checked, we all still think of him as one of, if not the, best of all time.

Furthermore, there are a couple pretty good reasons for Ray to return from a football perspective, too. Most importantly, the guy can still ball. Ray is coming off an MOP quality season and was not just hanging on as a bit piece in 2017. He was Toronto’s most important player all year long and is showing no signs of slowing down. 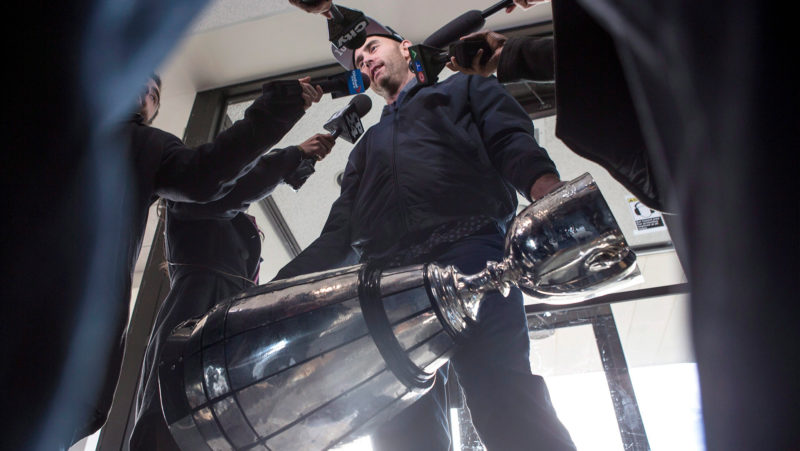 And then there’s the Marc Trestman factor. There’s no coincidence that Ray had a resurgent season in his first year with his new head coach. Trestman’s track record is impressive and representative: he’s an offensive mastermind who makes quarterbacks better. I don’t think Calvillo sticks around as long as he did under a different coach.

And let’s not forget 2018 won’t have the same difficult circumstances the Argos had to battle this year. Remember, Trestman didn’t get introduced until late February and there was a definite learning curve for everyone involved. Toronto has a chance to hit the ground running next year, and that might be more than enough to entice Ray back for another season.

Ray has nothing to prove to you or me at this point, because he’s done it all. He’s earned all the time in the world to deliberate on what he wants to do next. Once decided, we’ll all be waiting to either celebrate Ray’s banner career or welcome him back for a 16th CFL season.

Over the span of 60 minutes on Sunday, I thought the Calgary Stampeders played better football than the Argos did. They outgained them, made more stops, and generally executed better the majority of the night. But we love this sport because sometimes it comes down to a few plays that decide outcomes, even in championship games. There were three of them in the 105th Grey Cup.

It started with Ray’s picture perfect hookup with DeVier Posey in the first quarter. After falling down 6-0 on an impressive Stamps touchdown drive, Ray found the eventual Grey Cup MVP with a step on Calgary’s Tommie Campbell and completed a perfect pass right into the basket. It was a rare defensive mistake made by the Stampeders on Sunday and it led to the longest touchdown reception in Grey Cup history.

Next was Kamar Jorden’s fumble late in the fourth quarter. At the time, Calgary looked poised to open up a two-possession lead and instead saw themselves looking square in the face of a tie game. I know Jorden is getting torn apart in some circles, but I don’t fault him that much for fighting for more yards.

He wasn’t being “greedy” by any stretch; Jorden is wired to make plays and he was trying to do just that to seal a victory. Instead, the ball popped loose and Cassius Vaughn’s longest fumble return in Grey Cup history was completed just a few seconds later.

Finally, we have Bo Levi Mitchell’s ill-timed interception with 20 seconds remaining. I won’t lie; I was stunned while watching the sequence play out. I really don’t begrudge the Stamps taking a shot at the end zone in that situation. There was enough time left to try to win the game and still have Rene Paredes send the game to overtime.

I just couldn’t believe Mitchell would throw that ball at that time. A shot into double coverage with so little time left and no margin for error was the wrong decision. Sure, if it works out, it’s a gutsy play by a gunslinger, but it didn’t and I’m still pretty stunned with the game’s final play.

The worst part is Mitchell had played so well all night long. Playing through the shoulder injury that’s been ailing him all year long, Mitchell was accurate, dynamic, and explosive and gave Calgary every opportunity to win. It just so happens his one mistake all game came at the absolute worst possible time.

One is the loneliest number

No team has turned out elite quarterbacks like the Stampeders have over the last number of decades. That’s why it’s tough to comprehend how not one Calgary pivot has ever won multiple championships as a starter.

The aforementioned Mitchell is still stuck on his one Grey Cup win in 2014 and has come agonizingly close to a second the last two years. He’s not alone in the “just one” club, though, and has some pretty elite company.

Doug Flutie is a three-time Grey Cup champion, but his first triumph in 1992 was his only one in red and white. Jeff Garcia won just once, in 1998, before heading south to San Francisco. Henry Burris won three times, but 2008 was the only one as a starter with the Stamps. And Dave Dickenson was never able to lead the Stamps to a Grey Cup victory.

It really is tough to comprehend, the same way it’s tough to wrap your head around how Calgary has come away empty handed two straight seasons. On the bright side, I think we’ll see Mitchell back there again, because the Stamps will almost certainly remain a powerhouse the next few years.

The only thing that might disrupt that is NFL interest in Mitchell, which wouldn’t be overly shocking. If he does get another shot and wins, though, you can imagine how sweet that second Grey Cup win would feel after what has happened the last two years.