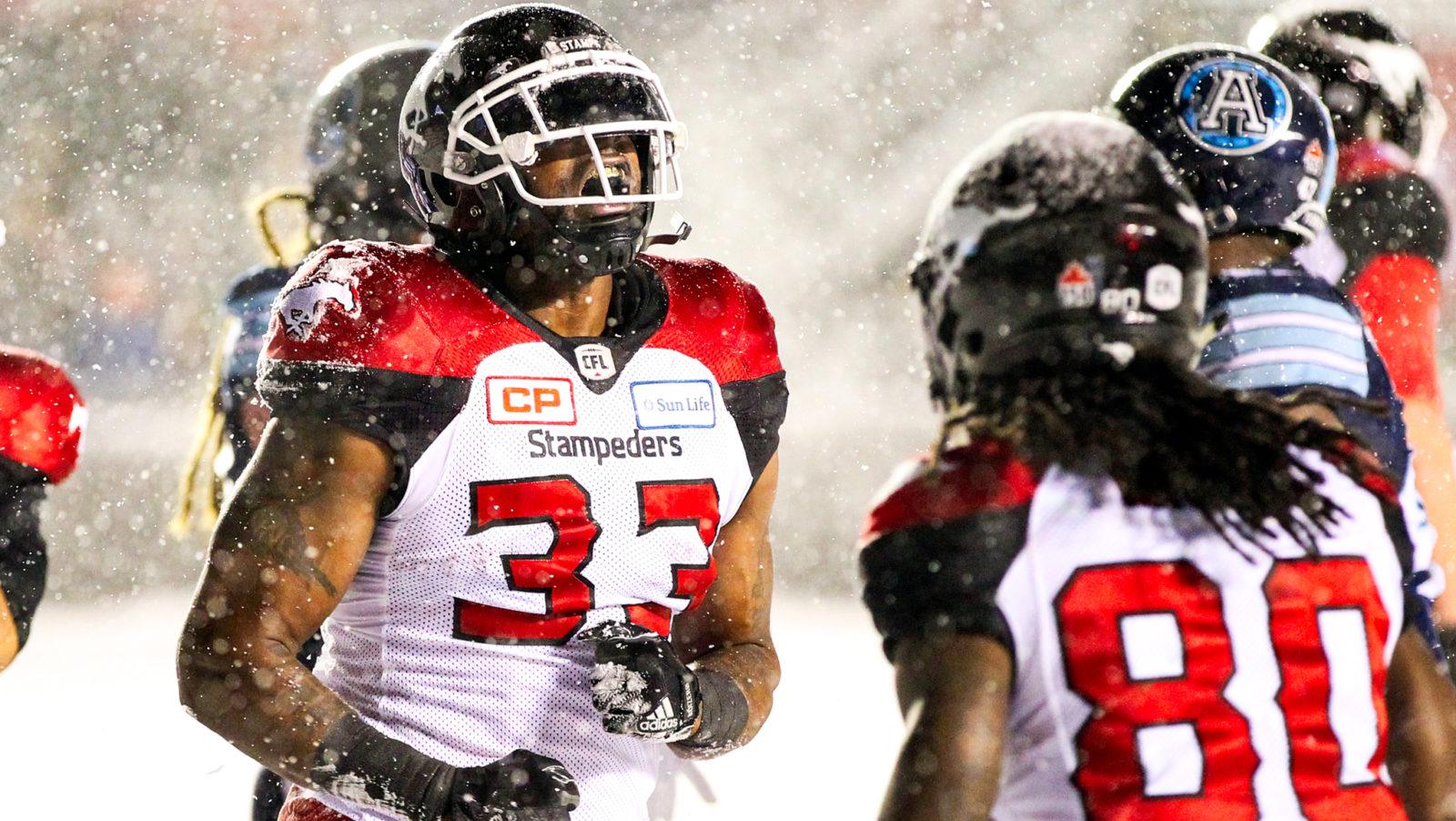 TORONTO — While the market quieted a little on Wednesday, the second day of CFL free agency didn’t come without a few marquee signings.

The Als added two more key pieces to their defence on a busy Wednesday, signing a ratio-breaker in Jamaal Westerman from the Bombers while adding one of the league’s top cover men in Mitchell White. They also brought back a potential starter at quarterback in Drew Willy.

In Saskatchewan, the Riders made arguably the biggest splash of the day by signing hulking running back Jerome Messam. They also inked Travis Bond, finding a potential replacement for the recently-released Derek Dennis.

While the Lions made a small addition to their offence in Canadian slotback Cory Watson, the REDBLACKS picked up a potential starter on defence in Rico Murray. Earlier in the day Ottawa added Julian Feoli-Gudino to its offensive arsenal, getting some depth at Canadian receiver.

Breaking his silence after a quiet first day was Jim Popp, whose Argos were reunited with T.J. Heath. Heath was considered the top halfback on the market, and he’s back in Toronto after being traded during the 2016 season. The Argos also added a kicker after losing Lirim Hajrullahu, signing Swayze Waters — another familiar face for the Double Blue.

Rounding out Wednesday’s moves were the Edmonton Eskimos, who brought back running back John White. The tough-luck running back, who’s dealt with two season-ending injuries in his CFL career, will complement C.J. Gable, who also signed an extension with the club earlier in the off-season.

Let’s break down the five highlights from the second day of free agency:

1. The Als get a ratio buster

The Montreal Alouettes have gotten a lot of help for their defence on the first two days of free agency, adding proven talent like Tommie Campbell, Mitchell White and Joe Burnett.

The biggest acquisition of all might be Jamaal Westerman, whose presence as one of the CFL’s top Canadian defensive ends could help the Alouettes on both sides of the football.

“The first thing it would do, I look at the lack of depth at Canadian wide receiver,” said CFL.ca’s Davis Sanchez. “Maybe that translates into allowing them to play some more imports on offence at wide receiver, a spot where there’s a shortage in Montreal. I expect them to address that with their first pick in the draft.”

The Als are hoping the influx of talent can make the Alouettes more competitive on the defensive side of things.

“That’s a team that needs a lot of help,” said Sanchez. “You’ve got to start somewhere and that’s more than a good start with three all-stars on defence and one of them a ratio-changer.”

2. Help in the field

While the Argos have lost two defensive backs from 2017 in Mitchell White and Rico Murray, they’ve upgraded at halfback, bringing in one of the top field halfbacks in the CFL.

T.J. Heath covers a lot of ground at field half, a position that can be difficult to fill. Meanwhile, his natural playmaking ability gives the Argo defence something it may have been missing last season.

“We all know the key to defence is turning the ball over, and T.J.’s a guy that has done that on a fairly consistent basis,” said Sanchez. “If you can add what T.J. averages, five, six turnovers a year into that lineup, that’s big.

“He’s a confident guy, too,” Sanchez added. “Any time you get a guy who’s got some juice to him – his confidence and his energy, you’ll feel that throughout the group.”

With most of their front seven already intact, the Argos have now laid the foundation on the defensive side of the ball for 2018.

One of the off-season’s biggest questions was answered on Wednesday, when the Riders signed power running back and national Jerome Messam.

The Riders’ running back situation is complicated — Cameron Marshall, Marcus Thigpen and Trent Richardson are also in the mix — but Messam’s strength and physical dominance brings something that few other running backs across the CFL can.

“The further into the game you get, the better Jerome Messam is,” said Sanchez. “Now you have Travis Bond in the mix and you have a big physical running back that can hopefully wear you down at the end of the game.”

“Messam brings flexibility,” said Sanchez. “On offence, when you look at that receiving corps, when you have the explosive playmakers on offence that the Riders have, you want to get as many of those guys on the field as you can.” 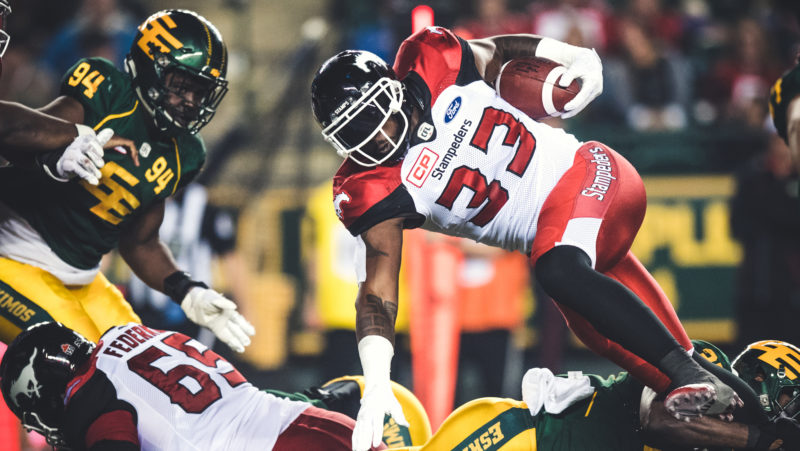 Jerome Messam gives his new team ratio flexibility and much more in the backfield (Johany Jutras/CFL.ca)

You can always bet on Chris Jones being busy in free agency, and the Riders’ head coach and general manager has not disappointed this week.

The Riders have released two key cogs in Derek Dennis and Henoc Muamba, potentially replacing them with Travis Bond and Sam Hurl. This is all in addition to signing Zack Evans at defensive tackle and Jerome Messam at running back.

For Sanchez, some of these moves are about cutting costs at positions where it’s efficient to do so.

“There are certain positions on your roster that teams will pay for because if you don’t have strong guys on the perimeter of your offence and your defence, teams can exploit that easily,” said Sanchez. “Inside guys like middle linebackers — it’s great to have a talent like Henoc Muamba, but it’s not crucial. You can hide a middle linebacker if he’s not strong. Other positions you can’t hide. I think that’s Chris Jones’ thought process.

“Henoc Muamba and Derek Dennis, two high-paid guys, both play on the inside. Derek Dennis used to be highly paid because he was on the exterior. Now as a guard he’s less crucial.”

5. The Lions get defensive help

Ed Hervey has focused his efforts on the trenches, signing big names on the offensive and defensive lines on the opening day of free agency.

On Wednesday, the focus turned to the defensive backfield, where the team had already lost Loucheiz Purifoy and Chandler Fenner to free agency with Ronnie Yell also poised to leave.

After some depth signings like A.J. Jefferson and Garry Peters, Hervey struck with the addition of SAM linebacker Otha Foster.

“Talented guy coming off an injury,” said Sanchez. “If he can fly around like he did before he went to the NFL, they got a hell of a player.”

Foster won a Grey Cup with Hervey and the Eskimos in 2015. In his career, he has 184 tackles, three interceptions, three forced fumbles and two touchdowns in 54 games.

While there’s still work to be done in that defensive backfield, getting Foster was a nice start for Hervey on the second day of free agency.