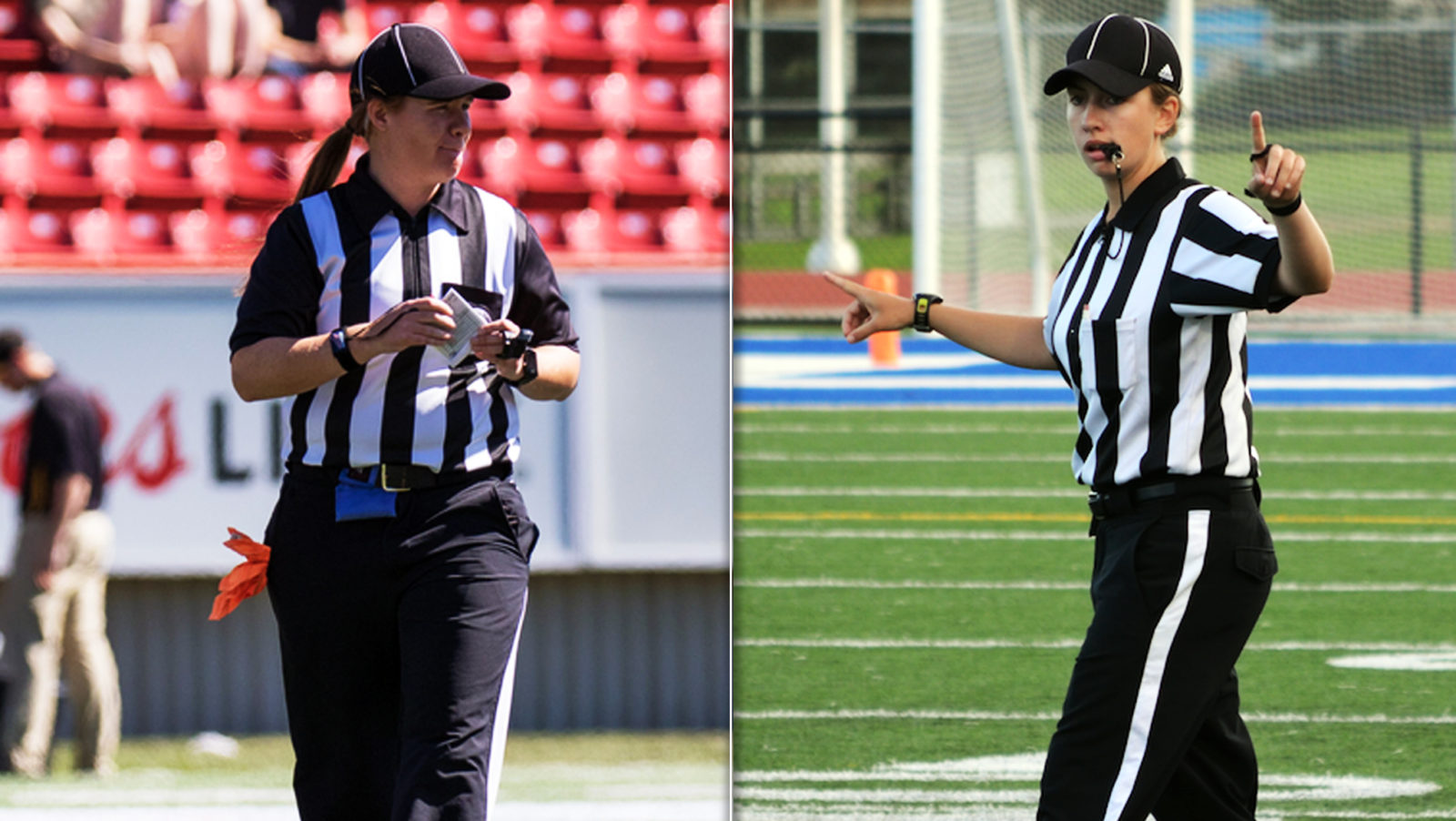 They have never met, reside in different parts of the country, but there is, at least, one thing linking Emily Clarke and Taylor Mickelboro – and that’s football.

Residents in Canadian Football League cities, Clarke in Calgary and Mickelboro in Hamilton, the two represent a growing interest in the number of women getting involved in various aspects of the gridiron game.

Times have changed, and it goes way beyond playing, or qualifying for team administrative duties. Primed and prepared for greatness, women are participating in football clinics, ranging from flag to touch to tackle and surging ahead in the world of officiating – from various levels of judging to referee to umpire.

Gone are the days when women were outsiders looking in. Now, curious and inspired, they wear the black and white officials sweaters as qualified capable rule enforcers.

Clarke and Mickelboro, who have never met, come from families where their fathers and male siblings have been officiating or coaching football. Having either tagged along at a younger age, or just fascinated with the game, now they’re getting entrenched as young leaders, influencing others and becoming role models.

Remarkably industrious and polite, both women are among a rising number of females officiating football – because of their unabashed love for the game.

“Officiating can be much like coaching – teaching players about the game and the rules. I do my job on the field, and when girls come by and ask me about what it’s like, I encourage them to try it.”

Before entering high school, Clarke, who grew up in Dundas, part of the Greater Hamilton Area, played, coached and officiated football games. She’s been wearing the official stripes for more than 10 years.

“I played football at age eight, and on boys teams, but it wasn’t until Grade 8 that I was invited to a clinic to learn about officiating, and I was the only female there,” recalled the 28-year old Clarke, now a Calgary school teacher, Athletic Director and coach.

“Officiating can be much like coaching – teaching players about the game and the rules. I do my job on the field, and when girls come by and ask me about what it’s like, I encourage them to try it.”

As for Mickleboro, also articulate, motivated and quite competent to officiate football games, she grew up with the game, tagging along with family members.

“I remember the days of being on stick assignments and I wasn’t really comfortable, so there was just one thing to do – work harder, get better and give myself more confidence,” said the 22-year old graduate of McMaster University who is now pursuing a career in law enforcement. “My goal is to go as far as I can in football officiating.”

Determined and persevering, Mickleboro was a member of the gold medal crew of officials for the 2017 International Federation of American Football (IAFA) championship held in Langley, B.C.

“I have responsibilities and sometimes, especially in front of team benches, I’m the easiest target because I am a girl and some people don’t take that seriously,” said a courageous and committed Mickleboro, who is capable of dealing with intimidation and threw out a coach last year. “You try to ignore the abuse, but some times, if it warrants action, it has to be done.”

While Clarke said one her biggest games occurred in 2017, when she officiated the Calgary Dinos and Manitoba Bisons university showdown at McMahon Stadium, the responsibility can also have its challenges.

“I’ve heard horror stories that officials have had to put up with, and I have had my share of dealing with abuse from spectators and coaches, but overall it’s something I enjoy doing,” said Clarke, a former recipient of the Roger Tierney Award for Leadership given out by the Calgary and Area Bantam Football Association. “Football players, of all ages, have been very respectful to me.”

Entering the world of officiating tends to be sensible and brave, beginning with the duties of a back, side, field or line judge, then progressing up the ranks and picking up the vibes to head linesman, umpire and the white hat of a referee.

For Clarke, now one of five female members of the Calgary Football Officials Association, she learned quickly. One of her biggest highlights occurred at age 14, when she said she was given the job of Referee for a minor football game in Rockton. These days, she is a Level Four official.

Peter Baxter, President of Ontario University Athletics (the largest university sports league in Canada), says women can achieve the highest level in sport officiating, and that football is no different.”

“The OUA has promoted pathways to officiating in all sports,” said Baxter, who is also Football Convener for the OUA and Athletic Director at Wilfrid Laurier University in Waterloo. “Universities, like Laurier, have partnered with football associations to house clinics and provide opportunities for growth in the game.”

Henry Chiu, President of the Canadian Football Officials Association, said his organization is actively involved in recruitment and training of women pursuing opportunities to officiate at all levels of the sport.

“Football is no longer a male-only sport,” said Chiu. “With recruitment and retention being our biggest challenge for the past decade, we now place greater emphasis in recruiting former athletes with certain qualities – commitment to excellence, ability to perform in stressful situation, a passion for fair competition – be it male or female.”

Allison Sandmeyer-Graves likes to see the spotlight on gender equity – including having women involved at every level of sport.

As Chief Executive Officer of the Canadian Association for the Advancement of Women in Sport and Physical Activity (CAAWS), Sandmeyer-Graves said a cultural shift is also important. It allows women to realize their full potential, in various forms of sports officiating.

“Sport has a massive input in our society,” said Sandmeyer-Graves. “Women are under-represented in the sport system and they can make a valuable contribution in all levels of sport. It’s wonderful to see them breaking ground in football officiating.”