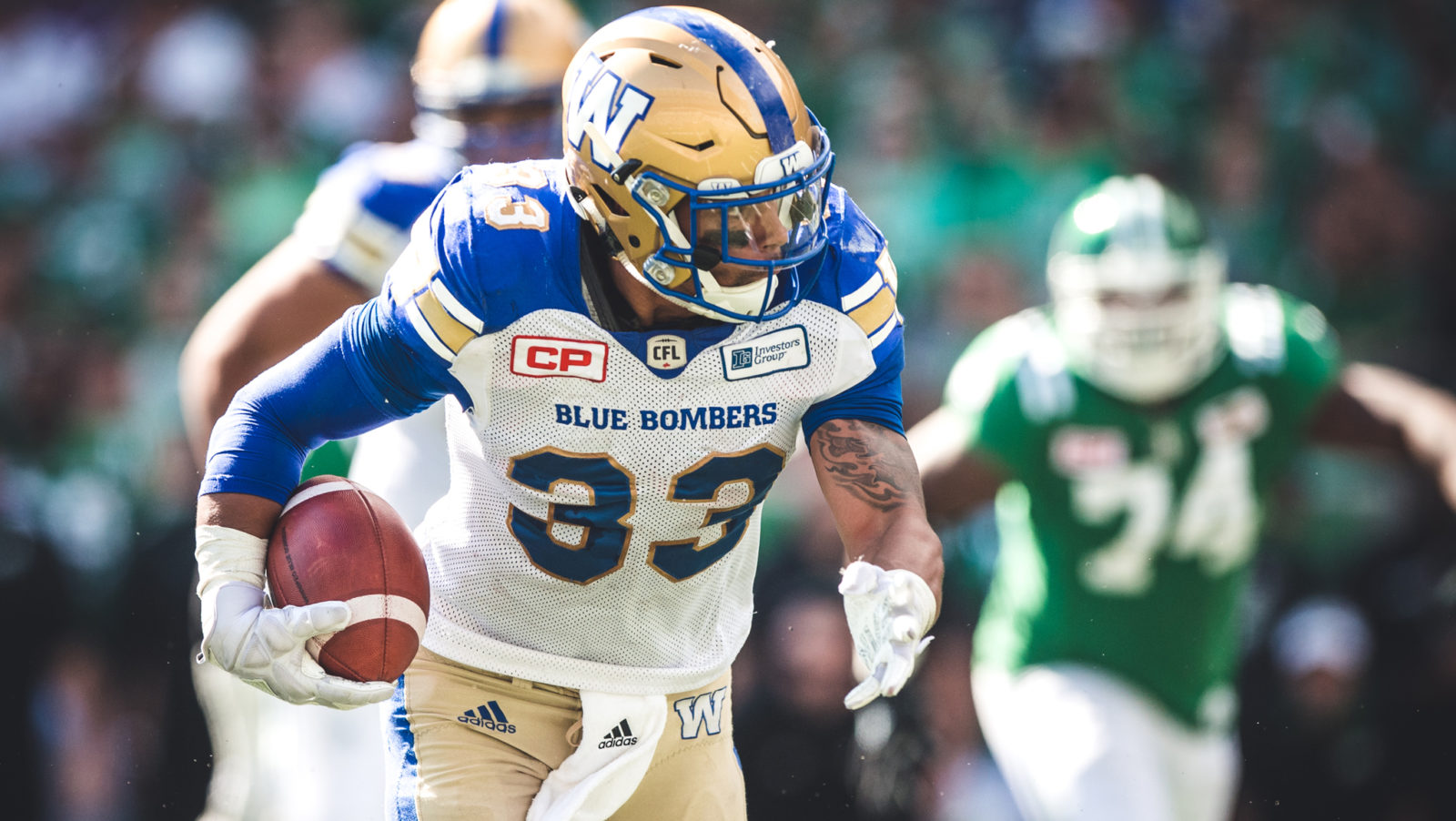 TSN CFL Fantasy is bringing something else into the mix to think about on a weekly basis this year, as they’ve added PPR to the scoring system.

If you’re a casual fantasy footballer, PPR is easy. Point Per Reception.

Previously it was all about yards and touchdowns for receivers and running backs for CFL Fantasy but now Andrew Harris’ 105 receptions are much more valuable as it would have added 105 points to his already fantastic fantasy season last year.

PPR is a necessity for some fantasy purists who will be happy to see the change.

CFL FANTASY: YOU BE THE GM
» Play TSN CFL Fantasy
» An early peek at the CFL Fantasy bargain bin 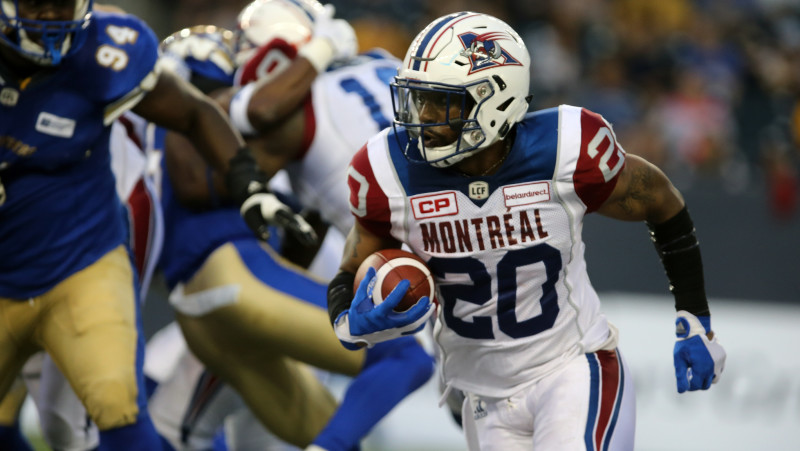 With the addition of PPR in TSN CFL Fantasy, players may want to consider using Tyrell Sutton (Jason Halstead/CFL.ca)

I’m just looking at yards and receptions to show why you need to pay attention a little closely to who is getting the quarterback’s attention, as touchdowns can be a little more random.

When PPR is added to the game, you see how running backs who are utilized in the passing game can increase in value considerably.

Andrew Harris last year had a total of 189 points based on his yardage, which was the most total yards among running backs. That was 50 points more than the next highest running back (Jeremiah Johnson).

Now add his 105 receptions to the mix and he’s at 294 points before touchdowns. Who was the closest?

It was Jeremiah Johnson, but now he’s 100 points behind Harris.

One player who would have been a little more valuable last year was Chris Rainey. Yes, he’s a special team player who can return the ball and maybe get you a touchdown, but Rainey added 51 receptions last year which tied for second among running backs with James Wilder Jr.

As far as running backs go, you’d think Jerome Messam’s 1,000 yard season would make him among the top running backs in Fantasy. Well, he’s more middle of the pack because he wasn’t as involved in the passing game as some of his peers. Messam was third in rushing last season, just 19 yards back of the lead. Add in receiving yards, and now points per reception, and Messam drops to sixth. And when there are only nine starting RBs, that’s lower middle of the pack rather than a must-play.

On the opposite end of that, Tyrell Sutton was sixth in rushing yards last year but his 44 receptions would have helped him become the fourth-highest scoring RB in terms of total yards plus receptions.

One player we didn’t see enough of but I’m intrigued to see in 2018 is if Cameron Marshall plays considerable snaps for the Roughriders this season like he did in the first half of last year. The Jerome Messam signing tempers enthusiasm but Marshall was almost on pace for a 60 reception season and if he becomes the ‘passing’ down back, could be a valuable asset with PPR this season.

Now, let’s discuss the receivers, where quantity is quality for PPR.

In years past you could find a receiver who has that big play potential who can bang off 70 yards on one play. But if that’s the only play he makes all game in PPR that’s an eight-point afternoon. A player with six catches for 70 yards is much more valuable.

The CFL keeps track of targets so pay attention to the league’s stat database on target rate for players. 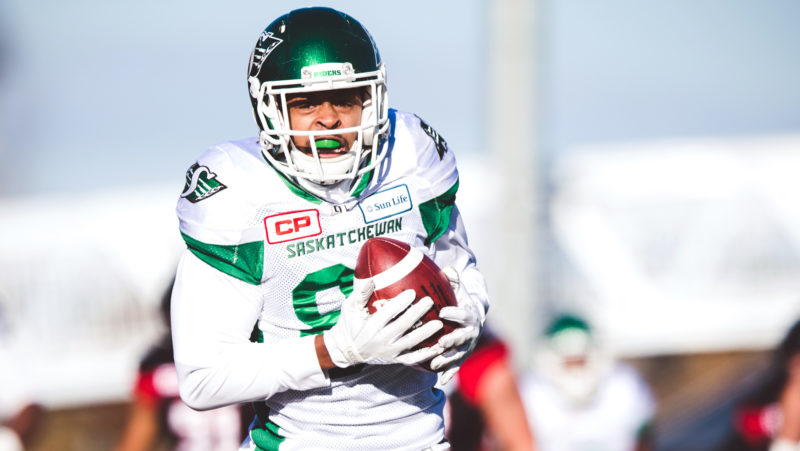 Bakari Grant would have had the most points on the Roughriders last season in yards + receptions (Johany Jutras/CFL.ca)

Jalen Saunders and Luke Tasker for the Hamilton Tiger-Cats are the best example for why PPR makes you think a little differently in setting up the roster.

Saunders was the big-play guy with 1,170 yards last season, while Tasker was the dependable possession receiver with 1,167 yards. That is 0.3 points difference.

Now with PPR, you see Tasker’s 104 receptions easily trump Saunders 76 receptions for a 27.7-point advantage over the year for Tasker. Because Tasker was targeted more it also led to more ‘red zone’ opportunities and four more touchdowns for the veteran Tiger-Cat.

Another team to think about was the Roughriders. If I asked you who had the most points in yards plus receptions, you’d likely think of Naaman Roosevelt or Duron Carter. Nope.

Bakari Grant was third in yards but first in receptions and first in combined points. The difference wasn’t huge but it shows.

One more example is Nik Lewis.

He was 27th in receiving yards in 2017. He was barely a factor to consider in fantasy football because he also wasn’t finding the end zone.

However, he was 14th in receptions. Combined yards and receptions, it would have put him 19th and just above teammate Ernest Jackson who had over 100 yards more than Lewis.

So when you’re putting together the roster for 2018 don’t just look at the yardage list, look a little deeper. Sometimes the QB’s favourite target isn’t necessarily the guy getting the most yards and a point here and there could make the difference on winning the week!