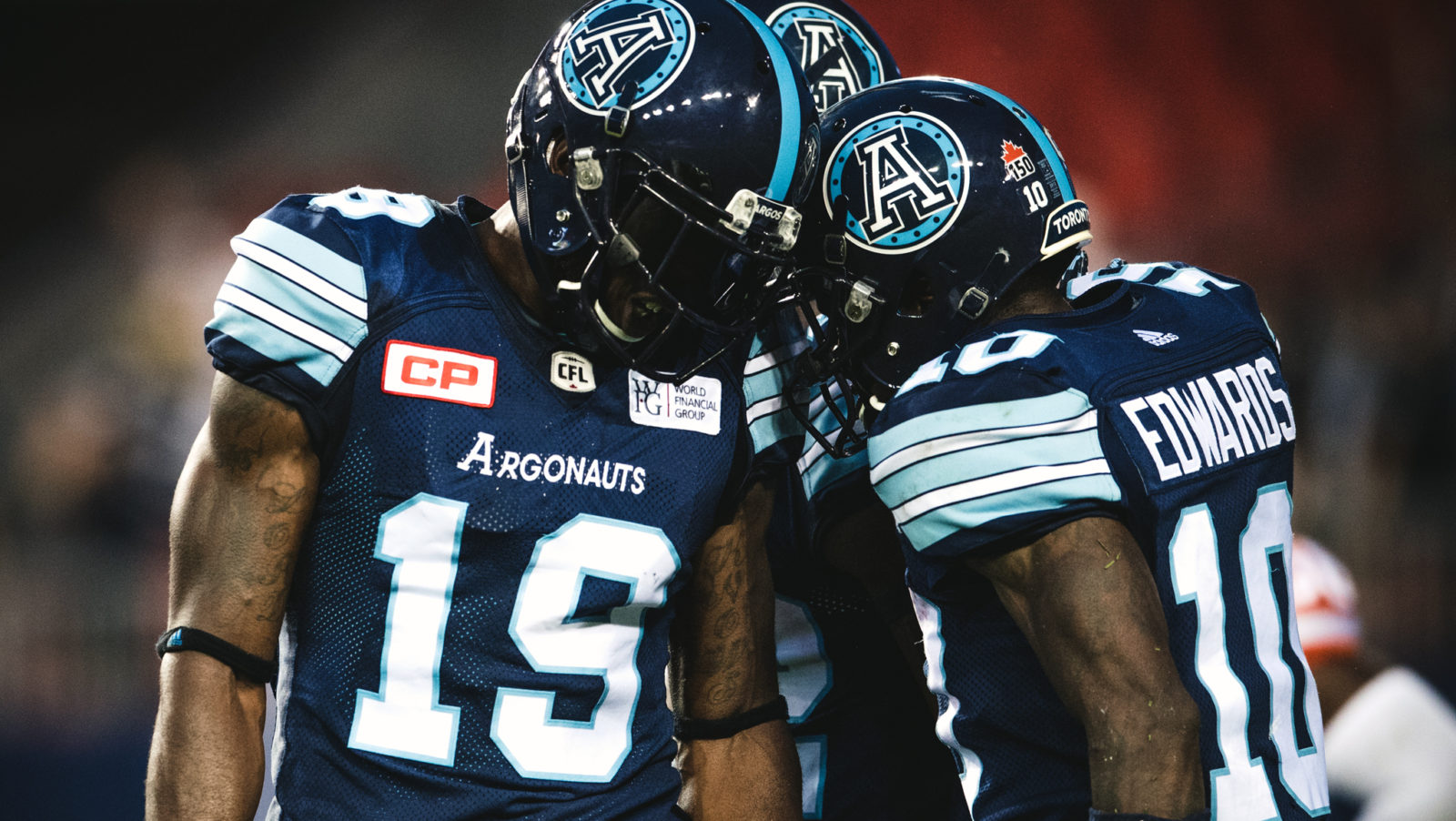 TORONTO — It’s not often the defending Grey Cup Champs don’t start on top of the power rankings. Then again, the Toronto Argonauts’ fairy tale finish was anything but expected.

On the legs of James Wilder Jr. and the throwing shoulder of Ricky Ray, the Argos emerged as a legitimate contender last year, winning seven of their last nine games including one of the most dramatic Grey Cups of all time.

But are they worthy of the title of Grey Cup favourite?

The time has arrived to once again rank the power in the Canadian Football League, as the Nissan Titan Power Rankings return.

With so much to dissect after such a busy off-season, CFL.ca ranks all nine clubs going into Week 1:

Despite getting younger, the Stamps will be no less hungry after experiencing the heartbreak of a lifetime in the 105th Grey Cup. The leadership has changed in Calgary, with Charleston Hughes, Jerome Messam, Josh Bell and Marquay McDaniel among off-season departures, but Bo Levi Mitchell is healthy and 20 pounds lighter and might have his most talented receiving corps yet. There’s a lot to like about the team that has won 13-plus games in each of the last five seasons.

Don’t let the standings fool you; the Argos played like a contender down the stretch last year, winning seven of their last nine games en route to a shocking Grey Cup Championship. From depth under centre to a superstar back, they have all of the ingredients to pick up exactly where they left off. Could the East Division have its first powerhouse since the Anthony Calvillo-led Alouettes? Marc Trestman’s resume, which includes three Grey Cup in six seasons, suggests it’s possible.

Maybe there’s an alternate universe where the Eskimos go for third down in the Western Final last year, win the game and then tackle the Argos in the Grey Cup. They weren’t that far off, and as Grey Cup hosts are sure to be in the running again this season. Brandon Zylstra and Adarius Bowman are out, but reigning MOP Mike Reilly still has plenty of options in the passing game and one of the CFL’s top running backs in C.J. Gable. If the O-line can hold together after the loss of Joel Figueroa, the sky is the limit in Edmonton.

It’s hard to take too much stock in pre-season, but concerns out of Regina are founded after the O-line couldn’t protect Zach Collaros in the final tune-up. Speaking of Collaros, the Riders’ new hope to become their franchise quarterback is no guarantee. The former Ticat has lost his last 12 starts and will need to be well-protected in order to gain confidence in his new offence. Still, there’s no better receiving duo than Naaman Roosevelt and Duron Carter, while defensive ends Charleston Hughes and Willie Jefferson is the stuff made of nightmares, making the Riders a threat to build on the strides taken in 2017.

The REDBLACKS should once again rank among the top two offences in the CFL. Diontae Spencer strikes fear in the eyes of opponents as an electrifying playmaker, while Brad Sinopoli and Greg Ellingson form an illustrious duo at receiver. Some believe Trevor Harris, if he can stay healthy, wins Most Outstanding Player at least once before his career is through. The question comes on the other side of the ball. The REDBLACKS will go as far as new defensive coordinator Noel Thorpe can take them.

The Ticats are a different team with June Jones coaching and Jeremiah Masoli playing quarterback. Now they’ll look to build on a 6-4 finish last year that’s got fans optimistic they can compete for a division title. Continuity plays into the Ticats’ favour, with most of their starting defence back along with an impressive cast of receivers. But another theme has emerged: will Johnny Manziel aid or disrupt the Ticats’ plans in 2018? Everyone’s watching to find out.

After a 12-win season that saw Winnipeg host its first playoff game since 2011, the Bombers did everything right this off-season, adding pieces like Chandler Fenner, Adarius Bowman and Nic Demski to try to put them over the top. What they didn’t account for was Darian Durant leaving right before camp and Matt Nichols suffering a knee injury shortly after. The month-or-so timeline on Nichols comes as a relief for Bombers fans, but that’s still enough time to struggle and, in the highly-competitive West, derail a season if things go poorly.

Though lost in the discussion of the wild, wild West, the BC Lions shouldn’t be taken lightly. Ed Hervey has turned over most of a roster that finished 7-11 last season, but he’s kept some of the CFL’s most dynamic playmakers and also ironed out a few of the team’s biggest issues. Joel Figueroa and Jovan Olafioye anchor a vastly-improved O-line, one that should help Jonathon Jennings look more like the young quarterback we saw in 2016 when he threw for 5,226 yards and 27 touchdowns on the way to the Western Final.

The pain of a three-win season lingers, but the Alouettes are a better team on paper after a busy off-season. Additions Jamaal Westerman and Henoc Muamba are two of the bigger ratio-breakers in the league, while Mitchell White and Tommie Campbell vastly improve a passing defence that caused a lot of issues for the Als last season. The elephant in the room is still the quarterback, but the Als have weapons at receiver and running back that will help. Former NFL coach Mike Sherman has his work cut out for him, but he’s got something to work with.