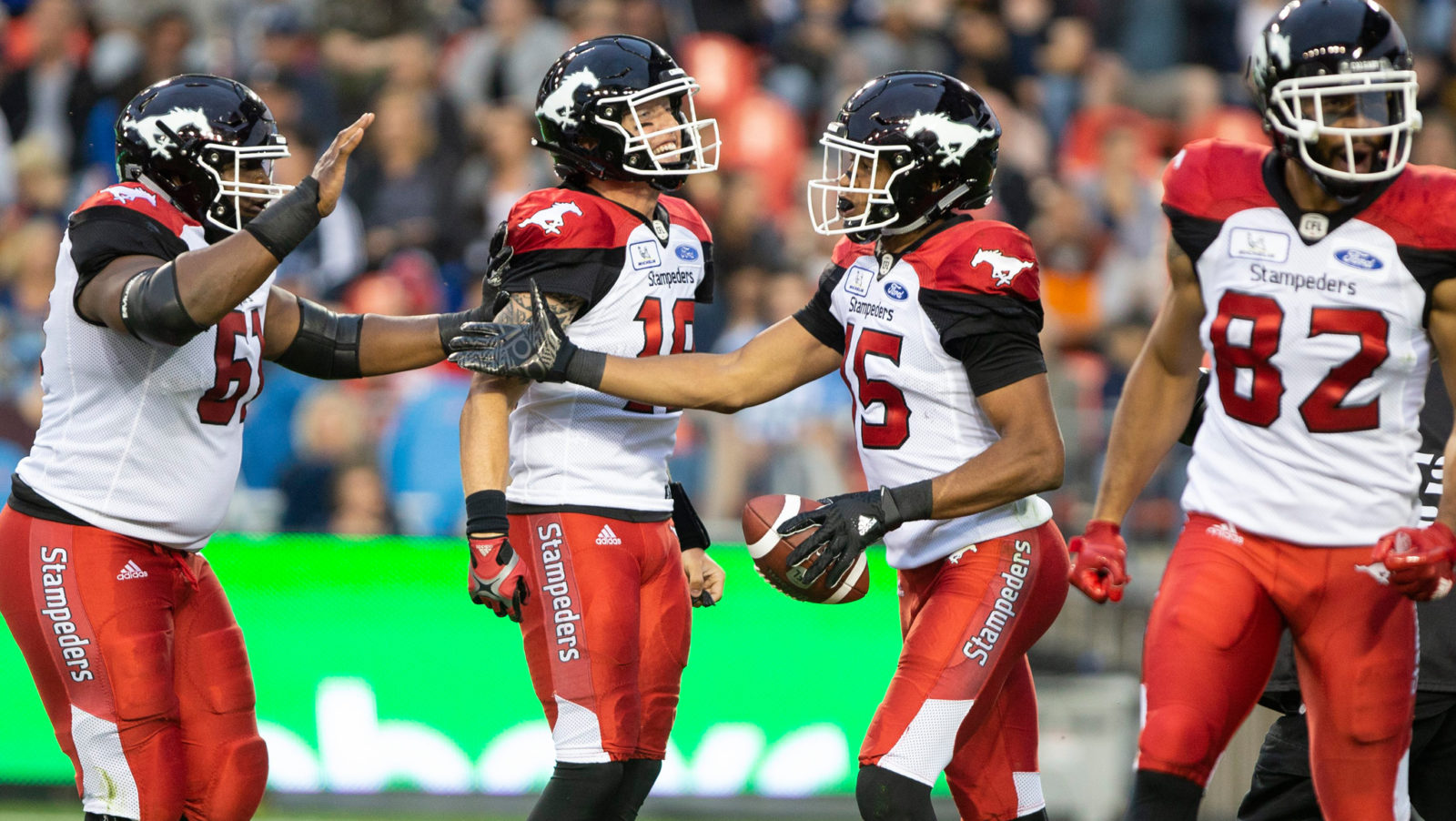 CALGARY — Throughout the off-season and early in 2018 I’ve told anyone who will listen that I believe the Calgary Stampeders are the best they’ve been since John Hufnagel’s arrival in 2008.

I say this with conviction, for a number of reasons, with hunger and relative youth being two major factors as well as coaching and organizational depth. I’m also in love with a super-athletic, explosive receiving corps that, after adding Eric Rogers on the eve of the season, hardly even seems fair to the rest of the CFL.

But there’s no bigger reason than Bo Levi Mitchell, who I believe was significantly affected by the shoulder injury he dealt with all throughout 2017. Mitchell and the Stamps were still very successful most of last year, but Calgary’s pivot lacked the same strong arm and vertical killer instinct that helped him win Most Outstanding Player the year before.

The throw that clinched the Argos an unlikely Grey Cup upset in November is the best and most obvious example I can think of. Many were critical of Mitchell’s decision on the play, but from my vantage point it was the throw that was off. The 2016 Mitchell throws a hard, well-placed ball and the Stamps are Grey Cup Champs.

Here’s the scary thing for the CFL’s other eight teams: Through the first couple of games in 2018, Bo Levi Mitchell looks a lot more like the version we saw on stage at the Shaw CFL Awards in Ottawa two Novembers ago collecting the league’s most prestigious hardware. In fact, he’s even added the threat to run, dropping 20 pounds and coming into the season in the best physical condition of his career.

Mitchell is in a position to attack defences vertically, more than we’ve ever seen throughout his prolific career.

Maybe there was some rust to shake off in Week 1, when Mitchell missed some big opportunities and completed less than half his passes in a win over the Hamilton Tiger-Cats. But even if the accuracy was a little off, the arm strength had returned, and in Week 2, a redemption game against the Toronto Argonauts, it was like the Katy, Texas native couldn’t miss.

Mitchell completed 20 of his 22 attempts, putting him in the record books for single-game completion percentage with a minimum of 20 passes. PWC’s Weekly Insights breaks down the historic outing below: 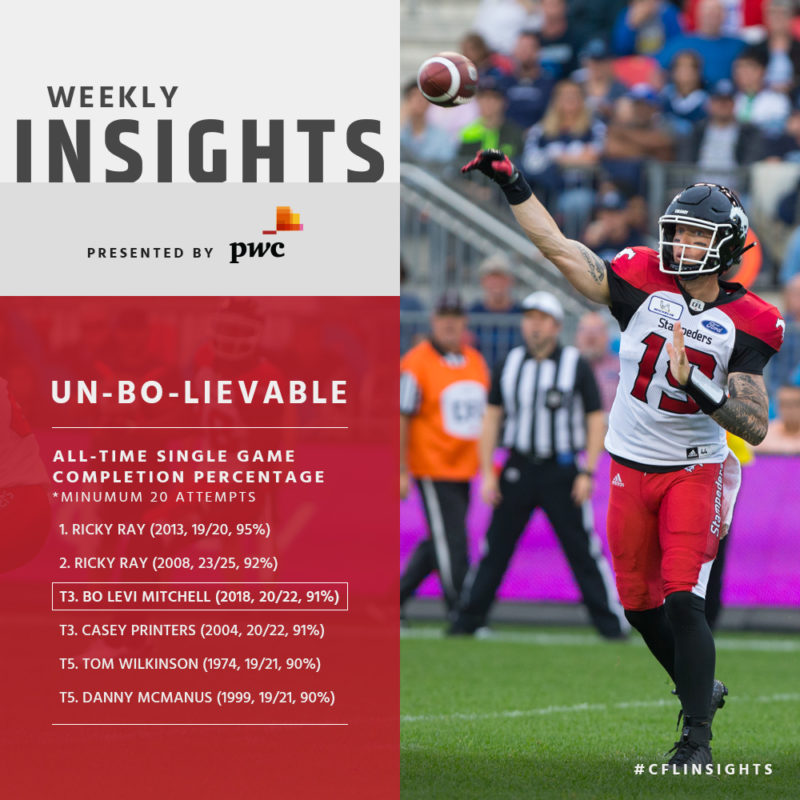 Most of those passes were not high-percentage plays or check downs, as evident in Mitchell’s staggering 14.7 yards per attempt, and an 11.5-yard mark on the season.

We’ve seen this kind of efficiency before from Mitchell. For a time, during the 102nd Grey Cup vs. the Ticats in BC, Mitchell flirted with the all-time single-game Grey Cup completion percentage, completing 22 of his first 25 passes (a remarkable 88% efficiency) on the way to winning Grey Cup MVP.

Suffice to say, there’s nothing wrong with Bo Levi Mitchell’s shoulder this year. And the Stamps’ quarterback, with vengeance in his eyes after hearing all off-season about how the Stamps continue to choke in the big game, has utilized three of his purely talented and explosive big-play receivers in Rogers, Kamar Jorden and DaVaris Daniels.

Those three pass-catchers, with Reggie Begelton also in the fold and the injured Marken Michel hoping to work his way back soon, make the Stampeders a matchup nightmare week in and week out. Even when Rogers commands double coverage it might not be enough to stop one of the CFL’s most dynamic receivers, while Jorden and Daniels can easily dominate if left unattended.

Meanwhile, Juwan Brescacin and Lemar Durant give the Stampeders Canadian options unlike any across the country. Players that made Anthony Parker expendable.

Just 30 yards shy of the 20K club, Mitchell should go toe to toe with Mike Reilly as the favourite to win Most Outstanding Player this year. With no disrespect to Trevor Harris and Jeremiah Masoli, who are emerging as elite quarterbacks right before our eyes and are legitimate candidates to win MOP, Mitchell and Reilly are in a league of their own at the moment.

Reilly’s 2017 MOP campaign, in which he threw for 5,830 yards and totaled 42 touchdowns through the air and on the ground, was one of the great all-time seasons for a quarterback. With the weapons and O-line, I could see Mitchell doing something similar this year, with a realistic chance to become just the fifth quarterback in history to eclipse 6,000 yards in a season (Flutie accomplished this twice while Kent Austin, Anthony Calvillo and David Archer also hit the 6K mark), and the first since 2004 when Calvillo accomplished the feat.

That, of course, isn’t taking into account any games Mitchell might miss late in the season if the Stamps have already wrapped up the West. Because in the early going, 2018 looks like it could finally be the year of the horse, specifically Bo Levi Mitchell.