John Bowman sat relaxed in a chair at the CFL head office on Wednesday afternoon. He was in Toronto for his team’s bye week, visiting a few friends, enjoying some food and the city itself.

The six-foot-three, 250-pound defensive end was spending the day on a mini-media tour, chatting with members of the CFL.ca team and other outlets in Toronto over the phone. He also joined Davis Sanchez and Brodie Lawson on CFL Game Time as a guest host.

From his days of playing offence – he suited up at tight end and receiver in his college days – to his diligent pre-game music routine to his twin brother, the 13-year CFL vet sat and shared all kinds of stories with me.

The 36-year-old is also really into fashion. He likes to go shopping, not only to buy new clothes, but to check out the new trends. He also didn’t touch a football until college. And when he retires (he told CFL.ca’s Chris O’Leary that his retirement is 98 per cent going to happen at the conclusion of this year) he doesn’t want to coach. Says he doesn’t have the patience for it and wants to focus on other things like marketing and advertising.

Get to know about all of this, and much more, in this edition of TMI! 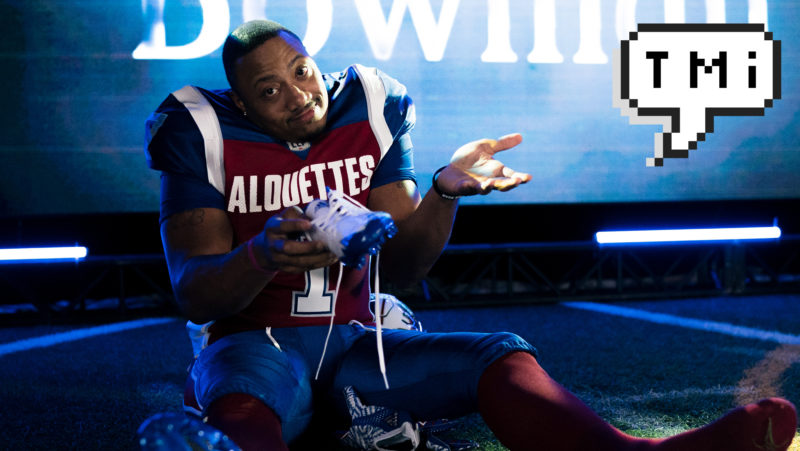 Kristina Costabile: Tell me something that fans might not know about you.

John Bowman: I didn’t play football growing up. I didn’t play football until I was in high school. I was in tenth grade. I played basketball and hand ball growing up in New York. Where I was from, in Brooklyn, high school or elementary football didn’t exist. If you played football in New York, you stayed in the country, you stayed in New York State. You didn’t stay in the city. When I left New York when I was 13 and moved to North Carolina, I was like, ‘oh, they play football in junior high school?’ I had no clue! I didn’t try out until my sophomore year in high school and then I got hit and I was like, ‘you know what? Football isn’t for me.’ (Laughs) And I wanted to quit but my aunt was like, ‘no, just stay on the team and tell the coach to not put you in.’ So I didn’t play anymore. I  didn’t play the next year, my 11th grade year. I went back out in my 12th year and I didn’t play defensive end, which I was upset about. I played tight end and wide receiver but I wanted to play defensive end. I told my coach I wanted to hit. Don’t let me get hit, let me hit people! And he was like, ‘no, we don’t have any one at this position (tight end).’ I was the last guy. My school was amazing at football, we were number two in country. We were number two in all of America in high school football. So he was like, ‘no, you go where we tell you to go.’ So I had to play there.

KC: When did you make the switch to defensive end?

JB: I was in college. It was weird because our offence (different). In high school, we were tight end and we played on the line of scrimmage, close to the body of the offensive linemen. In college, they played spread so I played tight end but I played like a receiver. It was like I was Bambi out there! I had no skills. Like I had never stood up before in my life! They were like, ‘you know what, let’s play Bowman at defensive end’ in my freshman year. I actually played both sides of the ball in my freshman year. For two or three games of the season I played tight end and defensive end. After they threw me a pass and I dropped it they were like, ‘let’s keep him at defensive end’ (laughs). By game four or five of my freshman year of college I never played offence again until I got to Canada. Once I got to Canada, I played offence a couple plays.

KC: When did you play offence here?

JB: While I was in Montreal. Don Matthews, I don’t know why but he hated Canadians (laughs). Excuse me, Canadian players. He used me or Anwar Stewart as the big personnel. It was like second and one, or third and inches, he would send me and Stew on. I probably played five or six offence plays a game. That was in 2006, 2007, 2008 and when (Marc) Trestman got there it was probably only like, two times.

KC: What do you like to do in your free time?

JB: In season, that doesn’t really exist. For me, I like to think I’m trendy or that I act like I can dress. I go shopping even if I don’t buy stuff, I go look around for inspiration. It’s just what gets me excited, to watch clothes and fashion and trends. And I also like to cook.

JB: I’m from the south so anything fried I’m good on. And I actually made a mean lasagna!

KC: What’s on your pre-game playlist?

KC: Do you get the aux cord or is it a headphones things?

JB: No, no, no, I keep my headphones in but I don’t need the aux because I’m singing! But by that time it’s just the defensive line and the offensive line in the locker room. The receivers, quarterbacks, they’re already out on the field so by that time, I’m the top of the pecking order! So they can’t tell me what I can do! (Laughs).

KC: Other than music, do you have any pre-game superstitions or routines you have to follow?

JB: For home games, I do. I get up 8 o’clock and I make breakfast. I always eat grits, which is a southern thing. Cheese grits, eggs and bacon and OJ for breakfast. Every home game. On the road, it’s hard to find grits so I’ll get an oatmeal or whatever. I eat, I’ll go get in the hot tub, come back in, stretch, go get lunch. I don’t eat lunch yet, I just go get it. This is usually around 11:30. Then I come back home, breath, shower, get the hot tub smell off me. Then I take a nap from, if we’re playing at 7 o’clock, I’m taking a nap from 12 until 2:45. And then I get up, get dressed, go to the stadium. Then I’ll eat my lunch then I start my routine.

KC: Is that a routine you’ve done your whole career?

KC: If you were stranded on a deserted island with any of your teammates, past or present, who would it be?

JB: Probably my boy Stew. Anwar Stuart. It’s weird because he was an All-Star defensive end, player of the year. When I first got to Montreal, he didn’t like me. Which is okay, because it’s like, ‘somebody is trying to take my job.’ But as the years went on, he realized there were two defensive ends on the field and that I was just here to play! We ended up building a great bond, he was nine, I was seven. He let me be the best man at his wedding. He’s actually a funny dude. He was one of the first funny football players I’ve met. Everyone thinks they’re hilarious but he’s a funny dude, a caring dude. I think of all the teammates I’ve ever had I could spend the most time with him without being annoyed!

KC: If you could have a dinner party with any five people, living or dead, who would it be?

JB: Oh! This is easy! Only three guys that I ever wanted to trade my life with, Hugh Henfer, Will Smith, Derek Jeter. So those three are there. Automatically, they get there before anyone else. Four is Beyonce because it’s Beyonce. Probably should have said her first (Editors note: GREAT choice, John). And then my aunt because my aunt passed away but she raised me and my twin brother. So she took us from New York City and brought us to North Carolina and without her I wouldn’t be here. She gave me a second chance at life.

KC: You have a twin?

JB: I have a twin. My twin is retired military and now he’s working at a hospital back in North Carolina.

KC: Are you guys identical or fraternal?

JB: Fraternal. I don’t think we look alike at all! I’m six-three, my brother is five-10. He has dreads, I’m bald headed now but I could never grow dreads. He’s darker than me. We look nothing alike.

KC: If you were not a football player, what would you be doing?

JB: This is tough because I often ask myself this. Growing up, I didn’t play football so it wasn’t entrenched in my mind like, ‘oh, I’m going to play in the NFL.’ For me, I just wanted to have a job and make some money (laughs). In college, they asked me the same question and I was like, ‘I want to get married, have kids and live the American dream.’ This was 2003, my senior year of college. I never wanted to play football. I got my degree in marketing because I always wanted to do commercials and sell things and stuff like that. I would probably be in advertising, doing something like that. That was the thing that I wanted to do because I could never envision myself in an office. I always wanted to be in business, on the road selling, trying to get people to buy this. That would probably be my thing.

KC: Do you think that’s something you’ll get into once you hang up your cleats?

JB: My favourite moment of all time was probably my first touchdown. I was in college, I was a junior, sophomore or something like that and it was a fumble and I picked it up and scored. I ran back like 60 something yards. Once I switched from offence to defence, I was like, ‘man! I’ll never score a touchdown now!’ And then when I got to college, three years in, it just happened. I’ve only had one other touchdown and that was here. It was against the BC Lions in the playoffs. It was an interception. A 45-yard interception against Casey Printers. He was in BC, went to the NFL, came back talking all kinds of garbage and I caught an interception and ran it back. We beat the bricks off of BC that year.

KC: What is one song that you’re embarrassed you know all of the words to?

JB: It was like Britney Spears, or Christina Aguilera, from like ’03, or ’04. It’s not a throw back but I don’t know the exact name of the song but when I hear it I’m like, ‘oh! I hate this song but I know it!’

KC: If you could have any superpower, what would it be and why?

KC: What are you binge watching right now?

KC: Do you watch a lot of hockey?

JB: I do. I’m more of a game-goer. I’ll go to the game before I watch it on TV. Unless it’s the Rangers, then I’ll watch the Rangers.