They are often tagged as “sleepers”.

For many young football players, coming up through the summer leagues and the high school game, they have been the no-name athletes trying to make the roster, pounded by the veterans and, in many cases, lose interest and fade off.

And then, there is a special group of individuals waiting for just the right opportunity to dominate and grab the spotlight.

One football player, not out for a stroll, is Tre Ford – the ace quarterback with the University of Waterloo Warriors.

In fact, he’s quite the opposite – and his level of intensity, game after game, along with his emergence as one of the top Canadian university football players has had people talking about success and ogling his performance on the gridiron. 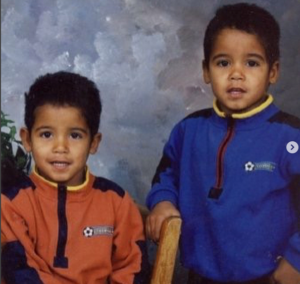 Tre (right) and his twin brother Tyrell at the age of three.

Ford is the youngest of twins (with Tyrell being six minutes older) and has put up some impressive numbers as Waterloo’s pivot. His brother, solid as a corner linebacker, is also on the team.  The two have helped the Warriors reach the Ontario University Athletics playoff this year for the first time since 2003, when both Fords were toddlers.

In 2018, despite what some people thought, Tre Ford proved them wrong by his unbelievable skills on the field.

He can pass – and does it well. He’s tricky with the football, elusive and when he has the chance to wheel out of the pocket, he can run, too. His numbers for the current season have been nothing short of eye-popping on a team that finished with a 4-4 record, but three of those losses were by a field goal or less. 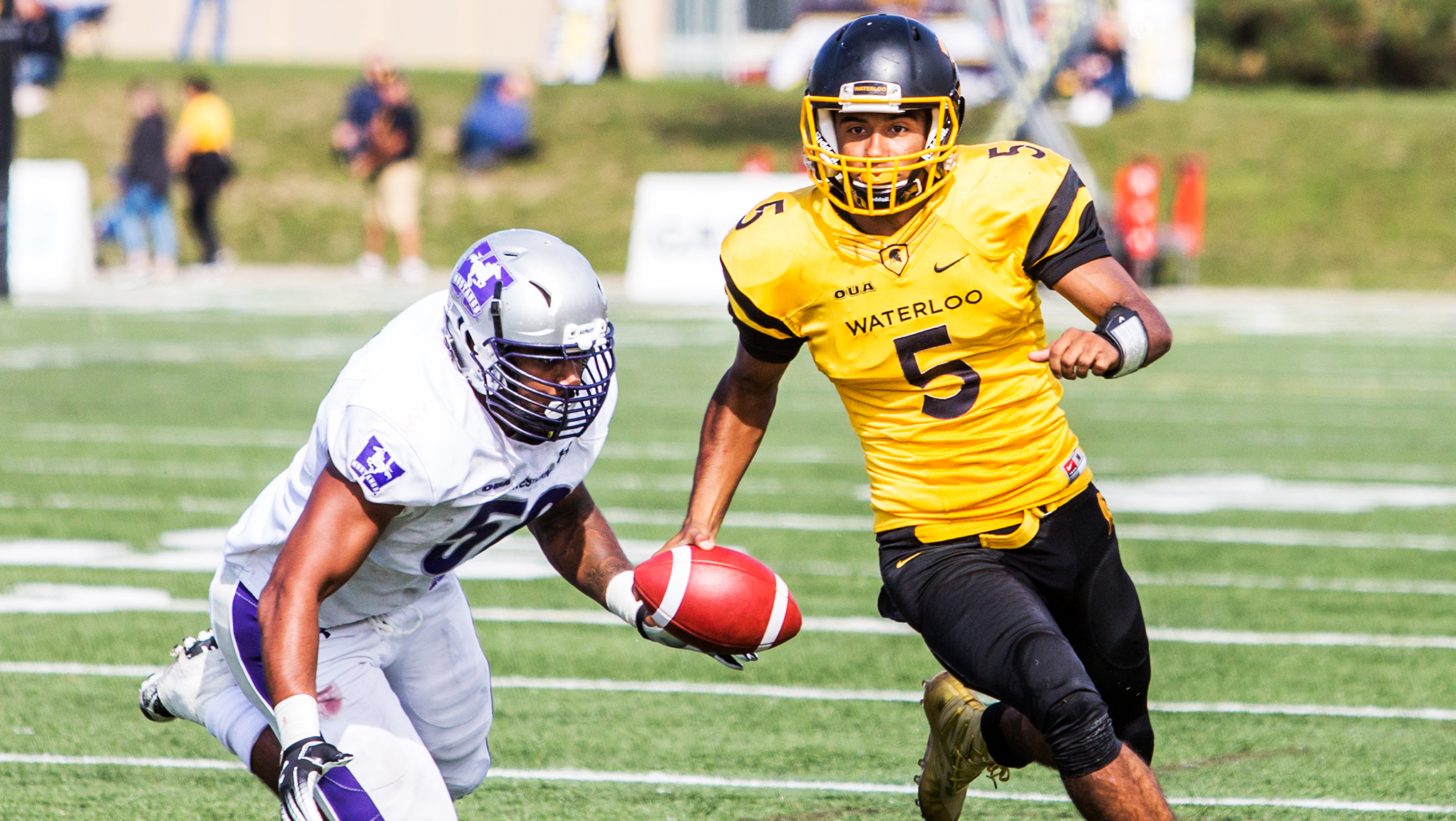 Tre Ford has taken the OUA by storm having a record-setting season at the helm of the Waterloo Warriors offence (USports).

This season, Ford has thrown for 27 touchdowns – tops in Canadian university football. He’s completed 201 of 270 passes for 2,896 yards in eight league games averaging 352.8 yards – the best in Ontario, and runner-up in the country. Only intercepted twice, he owns the all-time completion efficiency record of 74.1% in the OUA. Toss in rushing for 650 yards, among the top 10 in Canada.

“His confidence, his ability to make plays, the strong arm, entertaining to watch – he’s just a special person,” said Chris Bertoia, Waterloo’s head football coach, who first met the Ford brothers five years ago, when they were in Grade 10 in Niagara Falls, Ont.

“He knows the game, gives off this contagious positive energy, but he also is aware that he has room to improve that go along with expectations to take our program to the top. He’s one of the big reasons we have turned this program around.”

Sharing a residence, in Waterloo with his brother and others, Tre Ford is inspired by a poster that hangs on the wall with a message from the former South African political leader, peace activist, and philanthropist.

“My goal is to reach for the top, turn a dream into a reality, be the best that I can and one of the reasons I came to Waterloo was to be part of building a bandwagon rather than jump on one,” said the 20-year old, Tre Ford.

“I know that I have done well, and people are talking about awards but, for me, it’s all about teamwork and I still have room to develop into a better football player.”

Bertoia, who had known about the Ford brothers when he coached at Western, also knew the two weren’t going anywhere unless it was a package deal. One thing was also for certain, the relationship that had been developed over those recruiting years, would flourish when Bertoia told Tre Ford that he s the quarterback that would help rebuild the program.

“He’s a bright guy, loaded with energy, positive on and off the field and picks people up when they’re having a tough time,” said Bertoia. “He’s a leader and fits the character of what we want at Waterloo.”

Brimming with confidence, and a bit of cockiness, Ford has a chip on his shoulder. He’s heard people express doubts about him being a good university player by saying he’s too small and will struggle.

Only in his second year at Waterloo, after graduating from high school with academic honors, Ford was a part-time quarterback last year – and was still able to get the nod as the league’s Rookie of the Year in the Ontario University Athletics.

Topping the chart, or runner-up, in several statistical categories in Ontario and across the country, his performance puts him in the category of possible OUA Player of the Year as well as a candidate for the Hec Crighton award that goes to the top player in Canada.

Ford, in case you haven’t figured it out, still has three years of university eligibility and, with a university degree, wants to pursue teaching and coaching.

Dave Buchanan has coached some impressive student athletes, but says the Ford brothers are something really special. Tre Ford, he said, is in a special category. 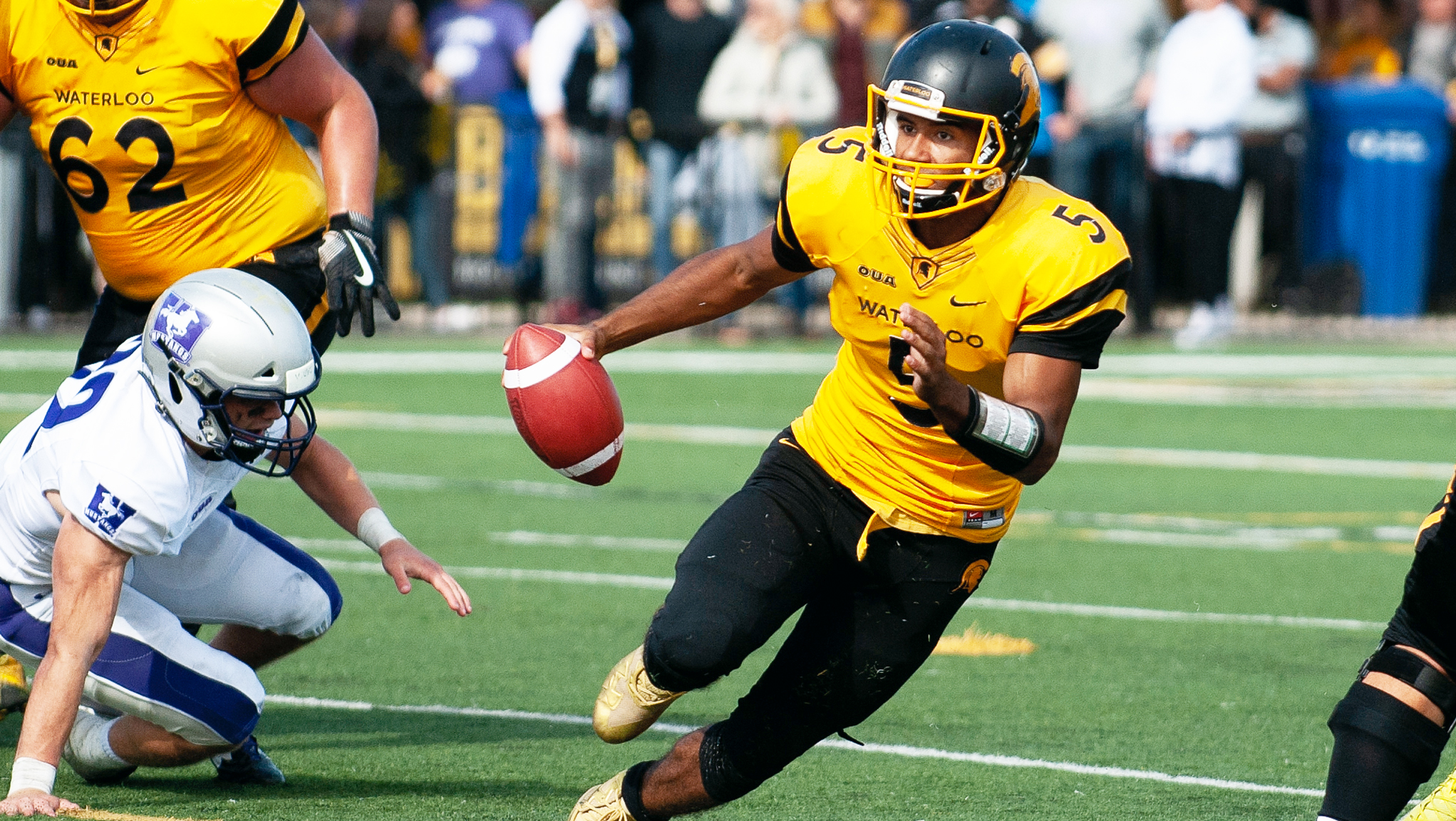 With Ford under centre, the Warriors have made the OUA playoffs this season for the first time since 2003 (USports).

“I saw him in the touch football leagues, back when he was six years old, I could tell there was something special about Tre,” said Buchanan, head football coach at A.N. Myer High School.

“He was the best athlete that I have coached in 12 years at the school. I saw him improve with each game. People said he was small, wouldn’t make Canadian university teams. I said he’d one day be a CFL quarterback.”

Before the Ford brothers entered Myer, the high school hadn’t won in some 64 previous football games. A year later, they were on a team that won a junior championship followed by three consecutive Niagara Region senior titles followed by Ontario bragging rights. In five years at Myer, the Fords only lost three games – and Tre was the dominant offensive player in the region.

Ford has already had a taste of the big league, catching the eye of scouts in Montreal. Last year, he gained valuable experience attending the Alouettes camp – at the unheard of age of 19 – as part of the CFL’s internship program.

“When they showed up and each put a helmet on, it was excitement at its best,” recalled Bertoia. “I knew the time had come to turn the program around – and we haven’t stopped.”