Cauz: Can the Lions’ coaches tackle the ‘Outrageous Burger’? 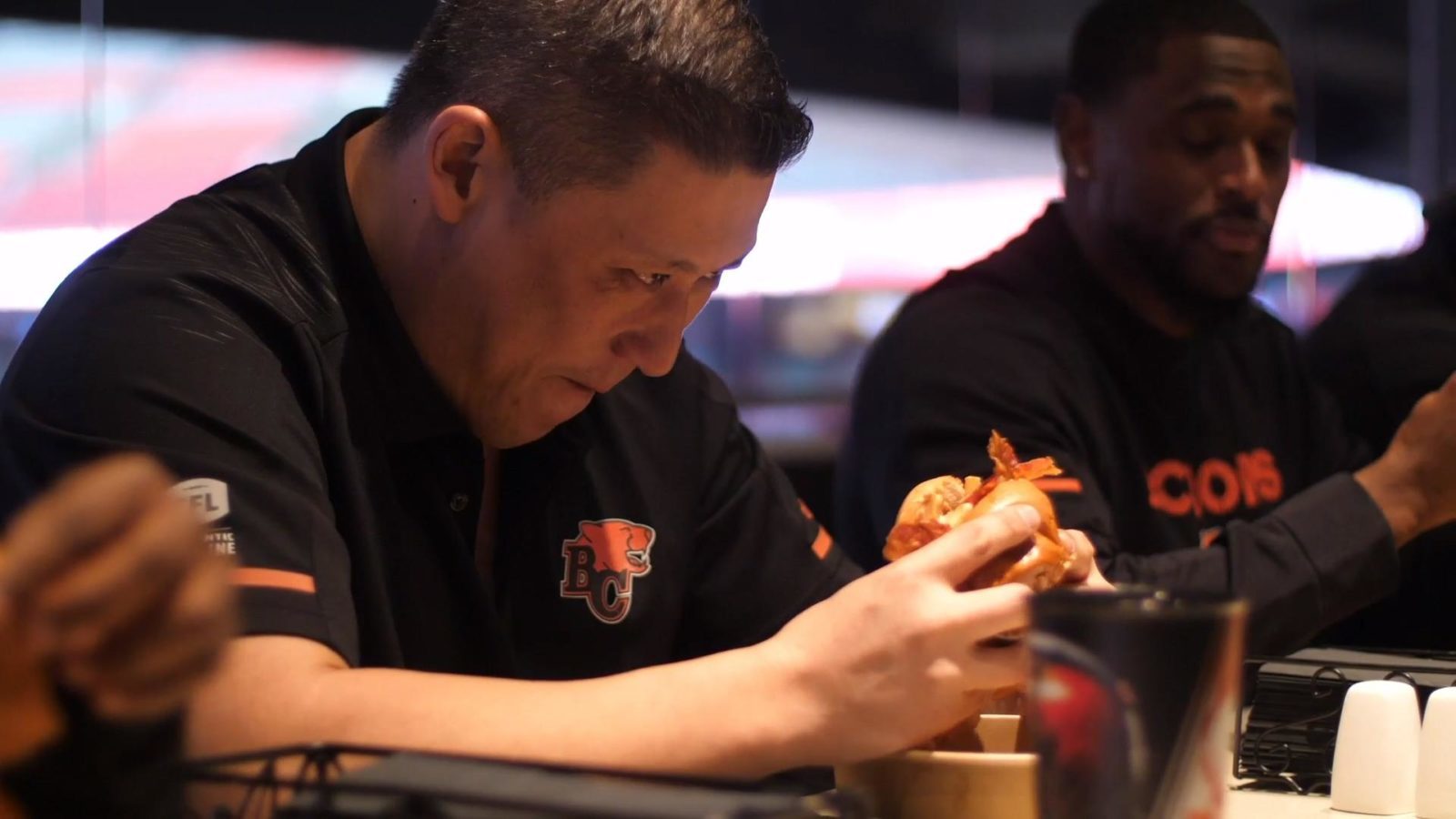 Cauz: Can the Lions’ coaches tackle the ‘Outrageous Burger’?

Head Coaches! They are the Debbie Downer of the professional sports world. They are control freaks who spend most press conferences either not answering your question, dodging your question, filling up air time with boring clichés and often just outright lying (sort of) to you.

I don’t begrudge them for this behaviour — they can’t help it, as the majority of coaches have been programmed from birth to avoid distractions like I steer clear of cooked vegetables. At best you will get a teaspoon of humour on the first day of training camp or if their team wins the Grey Cup.

Smart leagues and progressive teams will do their best to sell their players and the CFL is fantastic at it. From fun Twitter feuds to the high level of accessibility, fans of this league have so many opportunities to peak behind the curtain to what goes on beyond the football field. But what about the coaches? There is a Blockbuster Video amount of footage humanizing the players, but I can’t recall any involving coaching beyond long sweeping shots of them on sidelines or delivering inspirational locker-room speeches.

Well, that all changed for me a couple days back when I stumbled upon a BC Lions video involving a hamburger eating competition and four members of the Lions’ coaching staff in Keith Stokes (special teams and offensive assistant), Bryan Chiu (offensive line), Ryan Phillips (defensive backs) and Nik Lewis (running backs).

Before we get into this video, which involves a monstrosity of meat known as the “Outrageous Burger,” can we take a second to review the star power on the Lions staff!? By my count these four as players have won seven Grey Cups, 14 CFL All-Star selections, countless more Division All-Star accolades and about a Ka-Billion starts and individual team records. After scanning the other eight team websites I am convinced the Lions would destroy any other team’s coaching staff in an old-timers football game.

The video pits the four coaches at the team’s stadium, BC Place, and the challenge is who can eat the “Outrageous Burger” quickest. You can watch the entire video below, but here are the highlights:

:00 – Starts with a cold open of Lewis joking about using the bathroom, which immediately has Bryan Chiu simultaneously falling over and nearly spitting his food. Great start!

:07 – A long iso shot of the “Outrageous Burger.” Holy lord how big is that burger? If you’re putting down some cash I would not bet on Phillips or Stokes. This burger was not designed for the speedy defensive back or electric kick returner.

:12 – Phillips introduces the coach. I realize: Damn do I miss watching them on the field.

:26 – Phillips is still trying to figure out the best approach to eating the burger. I’m sure most of us have been there when you have no idea whether or not to just go for it and bite in the middle or attack from either the top or the bottom bun. You can also see at this moment that Lewis is not troubled at all about how to consume this caloric nightmare.

:32 – Chiu decides to remind everyone he has been on a diet for six months. Don’t worry Bryan, you look great. I am literally drinking a hot chocolate and debating eating some Christmas candies that are still around this house as I watch this video. I can only imagine how much weight Chiu has lost since his glory days of protecting Anthony Calvillo.

:40 – One of the funniest moments. Phillips is staring at Chiu in awe as Bryan is making quick work of his meal. Phillips is almost at a loss of words when he is commenting to Lewis that Bryan is adding to his burger. Phillips, and I imagine many viewers along with him, is in shock that Bryan is actually putting fries into this mountain of meat. To be fair, any eating contest between a DB and OL is just not a fair fight.

1:03 – In what has to be an upset, Lewis has that look on that many of us have late at a Grey Cup party when we’ve decided it would be a good idea for one more slice of pizza after we finish that second bowl of chili. Lewis is fading, the burger is winning.

1:15 – Bryan’s bowl is empty; Lewis is asleep while Stokes is watching Chiu’s domination, respecting the big man’s work. Phillips is in complete shock and almost a bit afraid that Bryan may soon eat him and everyone Phillips knows. It’s over as Bryan wins in a landslide at 11 minutes and 26 seconds.

1:24 – Ryan is sad. This four-time CFL All-Star has never looked so defeated.

1:26 – “What a burger” mumbles a near comatose Lewis who looks like he just went for thirds at Thanksgiving.

1:34 – Final word to Nik Lewis on the Outrageous Burger: “It makes those eyes close.”

It certainly does, but watching this video made my eyes open to the possibility of more moments like this where we get to see football coaches as humans having fun and not just as stoic teachers who can’t let loose unless Grey Cup confetti is falling down on them.