TORONTO — Shaw Communications Inc. and the Canadian Football League (CFL) announced that Shaw, in recognition of the exceptional performances by Mike Reilly, Jeremiah Masoli and Adam Bighill in the 2018 season, will donate a total of $50,000 to a children’s charity of their choice through the Shaw CFL Top Performers program.

“Across Canada, CFL players are stepping up as leaders in our communities and changing the lives of kids, youth and their families. Over the past three years, we have had the pleasure of celebrating the CFL’s best by donating to the charities and organizations that are most meaningful to them,” said Chethan Lakshman, Vice President, External Affairs, Shaw Communications. “Mike, Jeremiah, and Adam have each selected charities that are committed to improving the lives of kids and youth across the country, and we’re proud to support their efforts through the Shaw CFL Top Performers program.”

Reilly finished first in Shaw Top Performer points, with nods in Weeks 2, 7, 10, 13 and 18 as well as June and August. He led all quarterbacks in 2018 with 5,562 passing yards, and will direct his $25,000 donation to Foundry, which provides health and wellness resources, services and supports to young people across British Columbia. 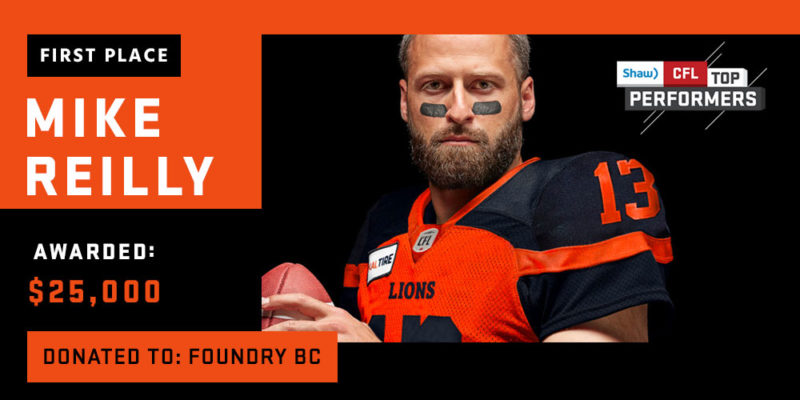 “Being involved in the local community, and helping with the very real issue of mental health are two things that I have become very passionate about. Foundry offers young people the help and support that they need through local centers across British Columbia as well as through online services. I am honored to be able to help them on their journey to serve the youth in our community and support their mental health needs. I would like to thank the CFL and Shaw for this awesome opportunity.”

Hamilton Tiger-Cats quarterback Jeremiah Masoli finished second among quarterbacks with 5,209 passing yards. Masoli will direct his $15,000 donation to the McMaster Youth Movement, which supports athletic development, active living, education and community initiatives for indigenous youth. He was a Performer of the Month for both June and September, and a Shaw CFL Top Performer in Weeks 2, 3 and 12. 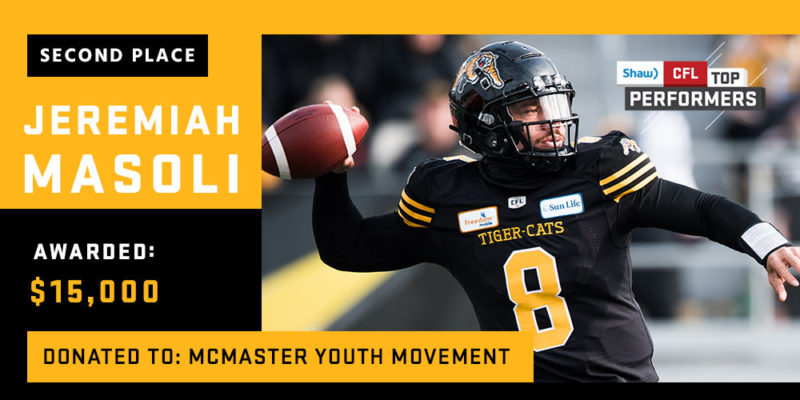 “The McMaster Youth Movement helps ensure long-term Aboriginal athlete development and growth on the school campus in Hamilton, and beyond,” said Masoli. “I’m extremely happy to help empower Indigenous students in their pursuit of excellence in sports and academics through this great cause, and excited to continue to be involved in this program moving forward.”

Adam Bighill will use his $10,000 donation to support Making Faces, a non-profit that helps children with facial differences and supports anti-bullying initiatives. Bighill registered his third season with 100+ tackles in 2018, and was named a Shaw CFL Top Performer in Weeks 4, 9 and 18 as well as a Player of the Month for October. 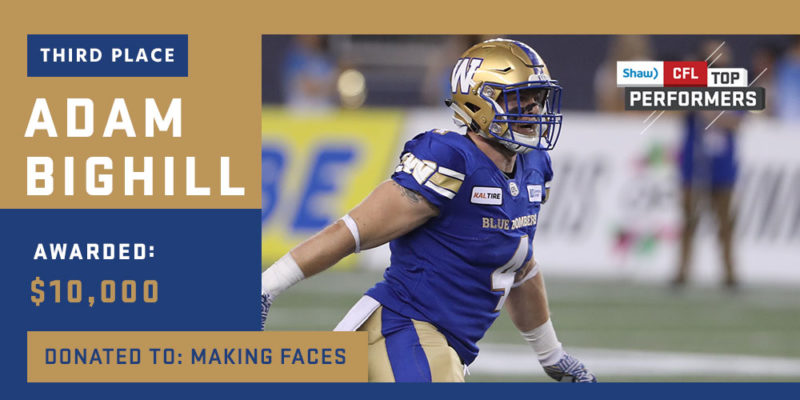 “As a board member for Making Faces, as well as someone who has grown up with a facial difference, I know first-hand how much we can positively benefit kids with facial differences,” said Adam Bighill. “The money we receive goes straight into running free workshops for youth across Canada and the United States.”

Shaw Communications has been a league partner since 2015 as the first and only presenting sponsor of the Grey Cup. At the end of each year, the top three Shaw CFL performers – as selected by an independent panel of judges and weekly point accumulation – are given the opportunity to choose a charity to receive a donation from Shaw. Over the past three seasons, Shaw has donated $150,000 to the players’ charities of choice and will continue the Top Performers donation program in the upcoming 2019 season.