Accuracy Grades: Who was on target in Week 5? 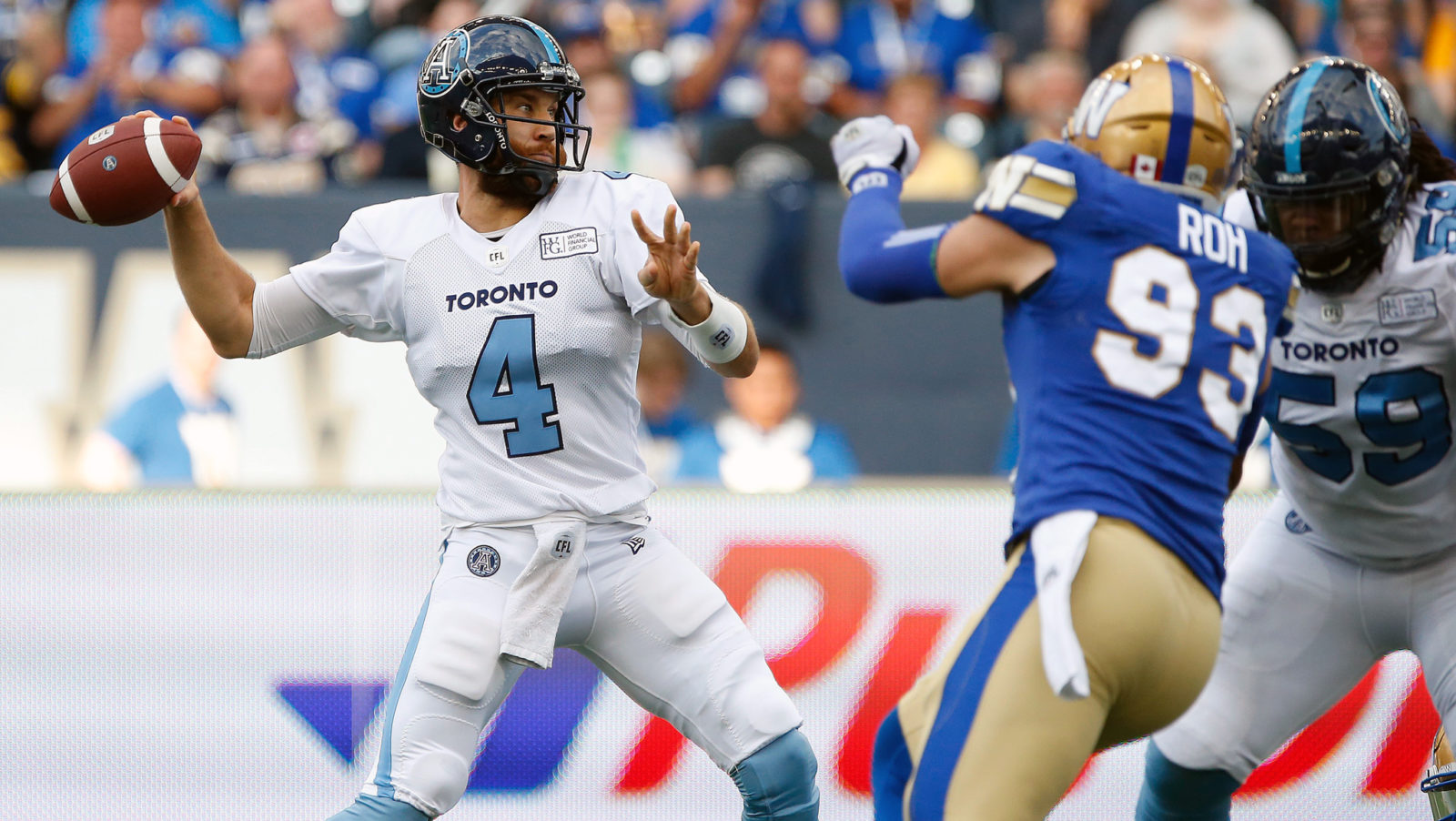 Accuracy Grades: Who was on target in Week 5?

Another week, another round of impressive performances by CFL quarterbacks as we continue on the 2019 journey towards awarding the CFL’s most accurate passer.

Let’s break down Week 5 in the CFL: 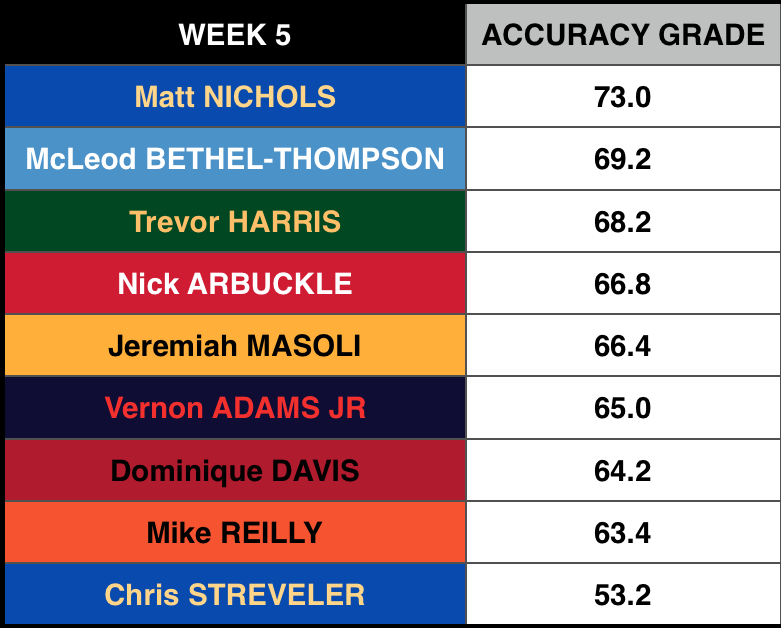 This week saw only Winnipeg employ more than one quarterback as starter Matt Nichols needed a moment in the blowout win over Toronto. Backup Chris Streveler came into the game and attempted only three passes with limited success while relying on his legs for the second week in a row in spot duty for the undefeated Bombers.

Unsurprisingly, considering the futile offensive output and consistent amount of pressure he faced last Thursday, Mike Reilly of the BC Lions posted a low accuracy grade in Week 5, his third lowest week grade of 2019 (behind Weeks 1 and 2) after posting two straight weeks of improvement in a pair of split decisions with Calgary and Toronto.

Dominique Davis battled injury and adversity at home while barely squeaking past Reilly’s mark, but he couldn’t reach his opponent Vernon Adams Jr. on Saturday. Montreal’s new lead man posted the lowest accuracy grade of any winning quarterback in Week 5 but nobody in Montreal cares as long as Vernon is finding a way to put points on the board with explosive plays in the air and with his legs as he proved capable of in Ottawa and against Hamilton in Week 4.

Rounding out the top five were two remarkably similar grades between Hamilton’s Jeremiah Masoli and Calgary’s Nick Arbuckle, with Masoli getting the decision late in a 30-23 victory but Arbuckle coming out on top in accuracy. 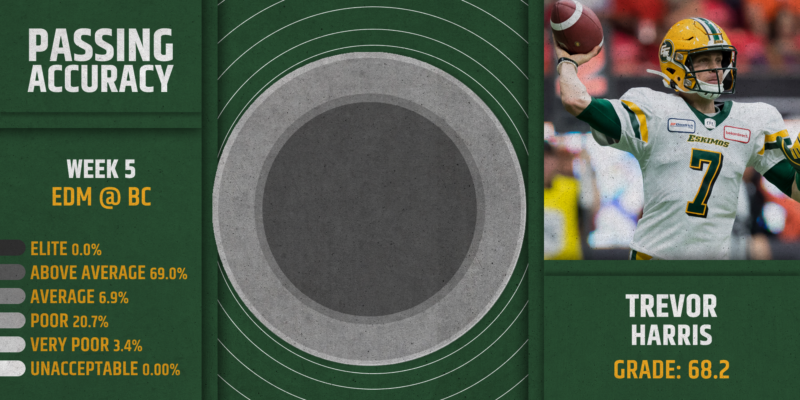 Harris had another Harris kind of week. No spectacular throws, but never a mistake. He only missed six throws total and none were of the disastrous interception type seen in other places around the league this week.

Trevor is smooth and steady and continues to appear more comfortable each week in green and gold, even when forced to wear double knee braces. 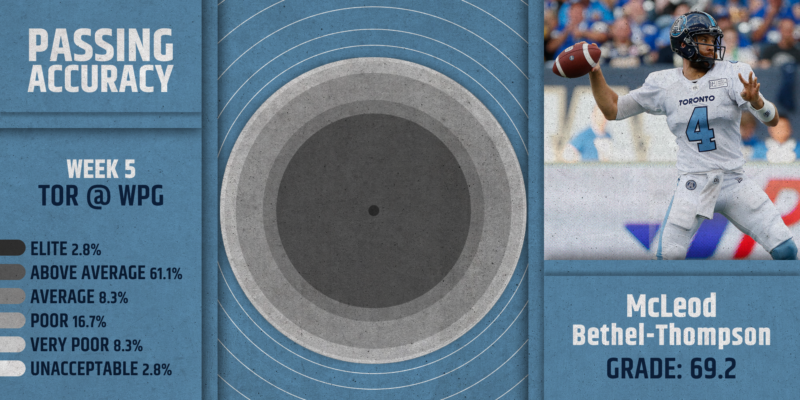 Despite the ridiculous start to Friday night’s foray in Winnipeg by the Argos, Bethel-Thompson showed maturity and leadership while standing in the pocket and attempting to make Toronto relevant as many turned off their TVs assuming the ball game was a done deal from the get go.

You have to respect Bethel-Thompson for that, especially at the beginning of a supremely difficult three-game Western swing. 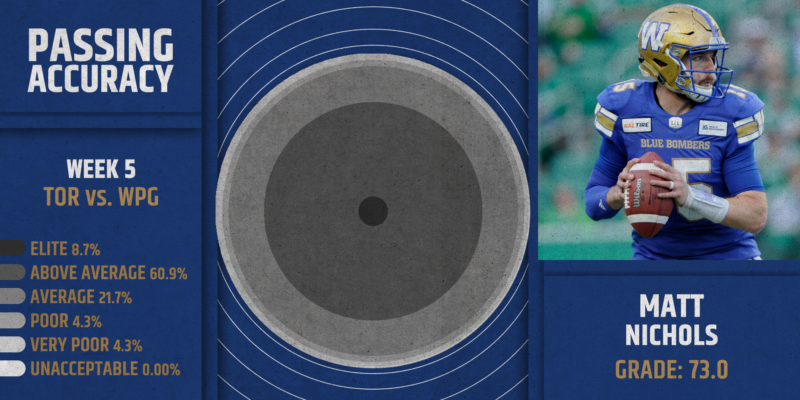 For Matt Nichols Friday night was simply easy money, but he didn’t rest with check downs and simple concepts — the Argos pushed and forced Nichols and offensive coordinator Paul LaPolice to open it up a bit which resulted in Nichols throwing a couple more money rail shots down the hashes to Darvin Adams and Nic Demski.

The Bombers look as balanced and dangerous as ever and if Nichols can keep putting touch on the ball like in Week 5, it will add yet another element to their Grey Cup hopes. 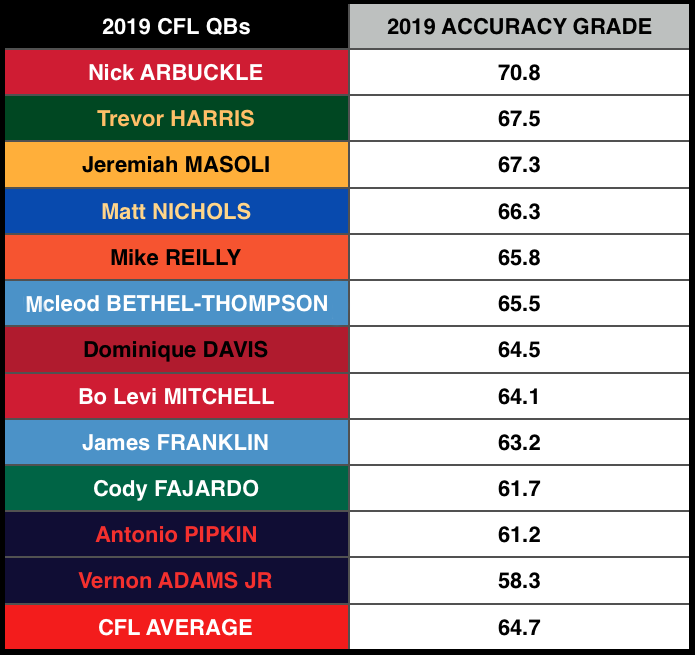 The biggest jump of the week was Nichols all the way from eighth to fourth in the overall standings, while Trevor Harris leap frogged Jeremiah Masoli and the CFL wide accuracy average jumped the most it has so far in 2019, perhaps signifying the passers we all love to watch are starting to get into a groove in the second month of the season.

Back next week with a breakdown of Week 6 that pits the surging Alouettes and Vernon Adams Jr. against Trevor Harris and the Eskimos.