Accuracy Grades: Who was on target in Week 8? 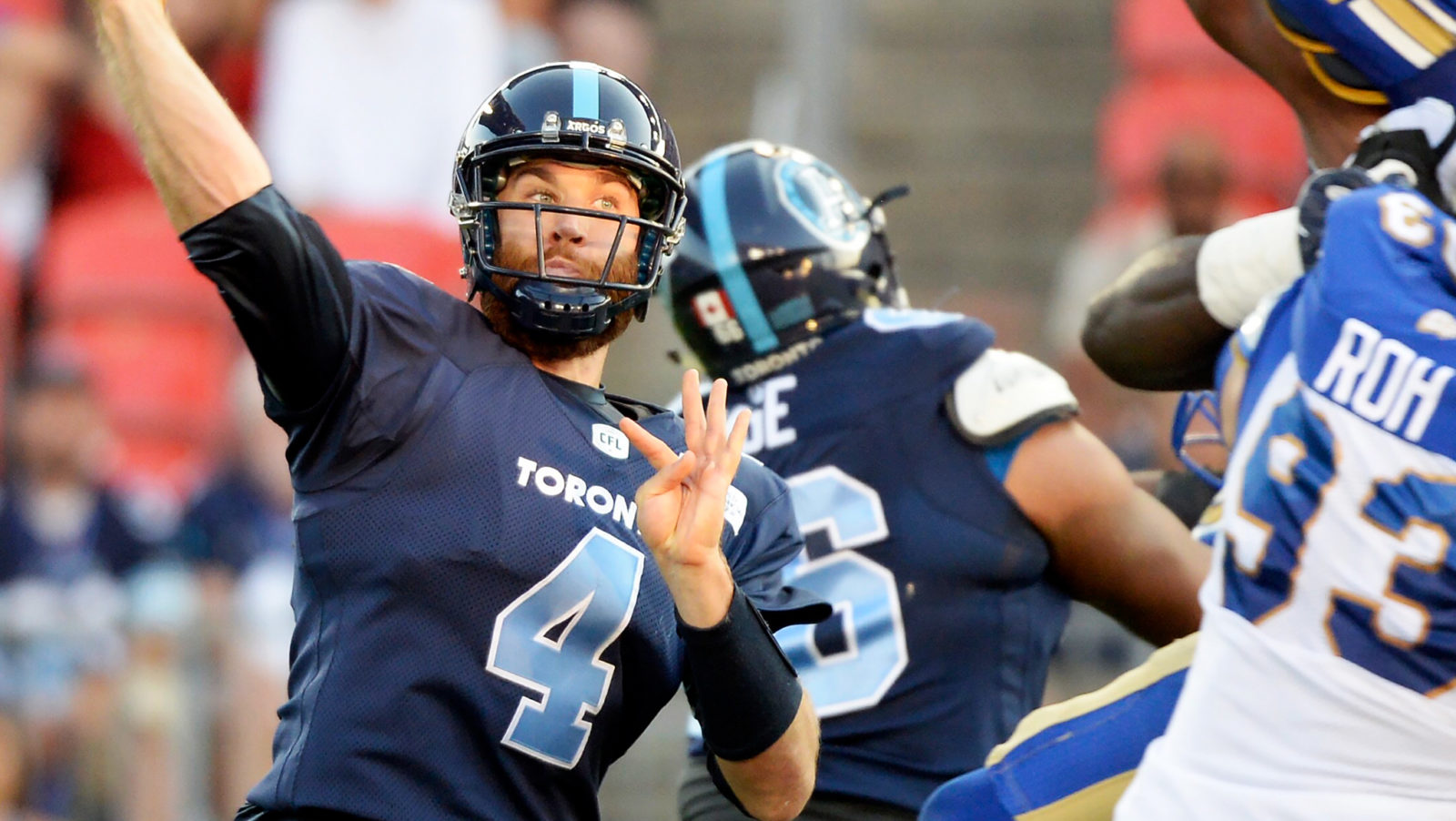 Accuracy Grades: Who was on target in Week 8?

Week 8 in the CFL saw a total of nine quarterbacks take meaningful snaps with Montreal the only one to feature more than one passer due to the injury of starter Vernon Adams Jr.

For the third-straight week, the CFL accuracy average rose to a new standard, this time from 65.0 to 65.2 thanks in large part to another outstanding performance by the Riders’ knight in shining green armour, Cody Fajardo. More on him in a second.

Let’s break down Week 8 in the CFL: 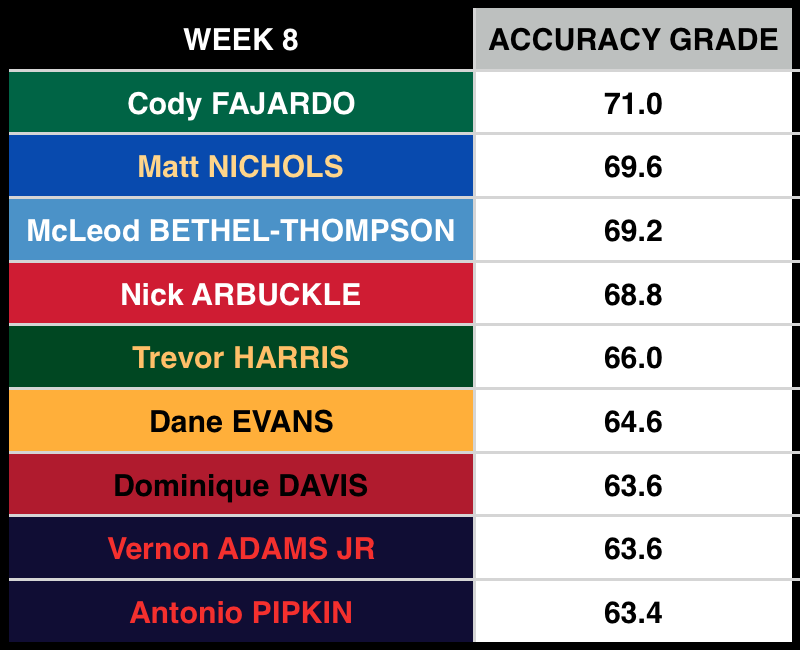 In Montreal, despite having both quarterbacks grade out shockingly close, the Alouettes had a chance in overtime to win once again against Ottawa in 2019. If Vernon Adams Jr. has to miss any significant time I’ll be tracking closely to see if original 2019 starter Antonio Pipkin can consistently surpass the season mark thus far of 59.9 set by Vernon Adams Jr. in the same offence.

Tied with Adams’ Week 8 performance was his opponent, Dominique Davis of the Ottawa REDBLACKS. For Davis, it was another up and down with the highest percentage of ‘unacceptable’ throws in the CFL but he did have some dimes as well. He and his team came out of Montreal with the all important road victory to split the season series in what has quickly become an awesome matchup in 2019 between these two natural geographical rivals.

Dane Evans struggled right out of the gate for Hamilton in Week 8 throwing an interception on his first attempt of the evening and couldn’t find the mark much of the night until a stretch of eleven-straight completions that saw Evans take control of the game while spreading the ball around to a multitude of receivers. With all that being said, he did come in the bottom half of Week 8 performances alongside fellow losing quarterback Trevor Harris.

For Calgary, Nick Arbuckle posted just his fourth lowest accuracy grade of the season which says a lot about what Bo Levi Mitchell’s replacement is being asked to do in Dave Dickenson’s offence. The mark of 68.8 this week was down from last week when Arbuckle reached a whopping 74.6 in a 17-16 road victory over Ottawa. 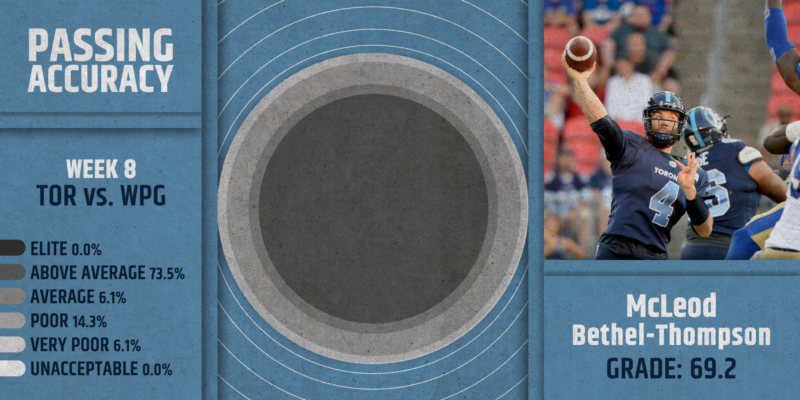 Team just traded for your replacement?

No worries. McLeod Bethel-Thompson got the job done for the Argos Thursday against the 5-1 Winnipeg Blue Bombers and in doing so earned his third podium finish of 2019. Perhaps more impressive than anything is Bethel-Thompson bouncing back from a CFL-low 48.4 accuracy grade in a Week 7 loss against the Edmonton Eskimos which made Toronto 0-6. 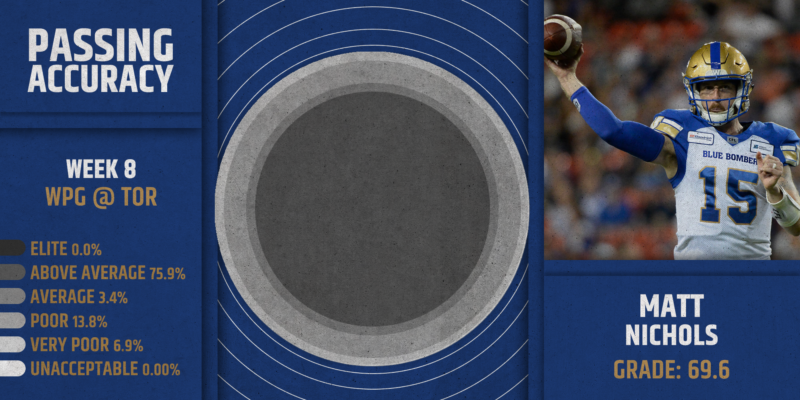 Despite getting the loss and having a terrifically slow second half, there is no denying Nichols had it going in the first half against Toronto and that effort is what helped him to the second-highest accuracy grade of Week 8. Only posting 29 attempts – to Bethel-Thompson’s 49 – and making few disastrous mistakes while continuing to play it safe and throw the ball away anytime he’s in trouble certainly didn’t hurt Nichols’ grade. 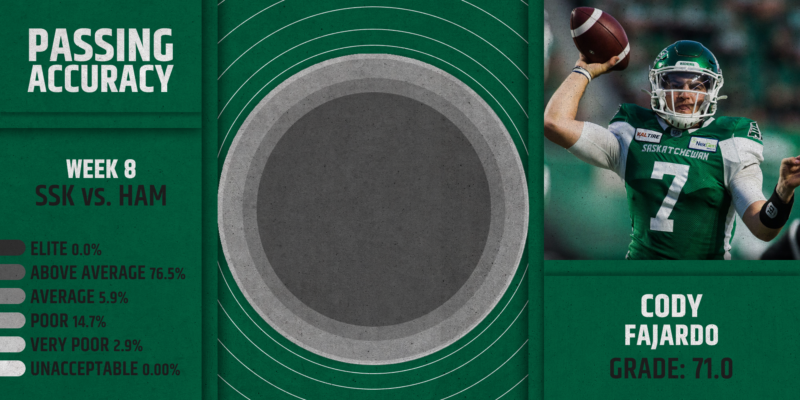 It was only fitting that in the week Saskatchewan said goodbye to Zach Collaros via trade to Toronto that Fajardo would not only re-affirm the organization’s confidence in him by scoring the game-winning touchdown diving for the front corner of the end zone on a banged up ankle, but also show off his arm by once again qualifying for the top three in weekly accuracy grades. This is the third-straight week Fajardo’s passing efforts put him in the weekly top three, the longest streak of any CFL quarterback in 2019.

Now a look at the updated season long standings. 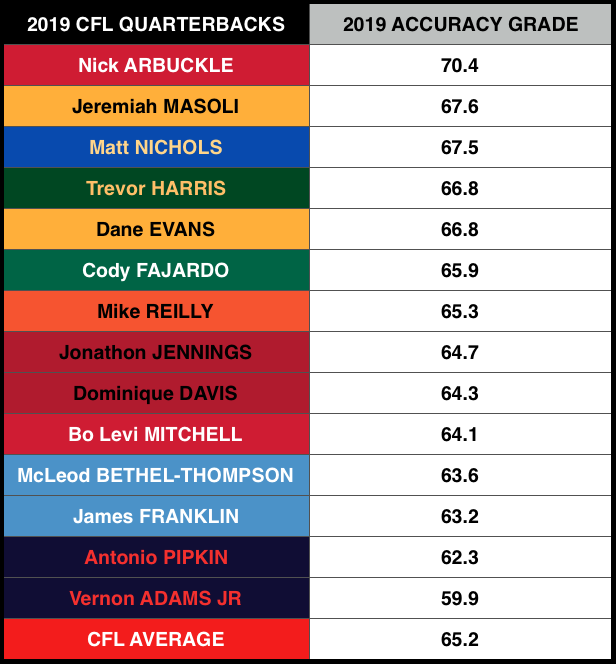 Calgary’s Nick Arbuckle continues to lead the pack but his margins have narrowed as his 2019 season grade moved from 70.7 to 70.4 in a win over Edmonton while Matt Nichols‘ losing effort in Toronto jumped his grade from 67.1 to 67.5.

The most dramatic fall of the week – thanks to the limited number of throws he previously had and three quarters of struggles – was Dane Evans (67.9 to 66.8) while Roughriders lead man Cody Fajardo’s steady ascend upwards continues with a bump from 65.1 to 65.9.

This week we get a chance to see what Trevor Harris can do against his old team, if Dane Evans can bounce back against Mike Reilly, who comes off a bye week, and if Fajardo can keep it rolling against Montreal.

Oh and there’s that little matchup of the CFL’s top two accuracy quarterbacks still active in 2019 that will decided who grabs top spot in the West standings as of Friday morning.

Back next week to break it all down!