All Michelle Hansen needed to make a positive change in her life was a little motivation.

It started for the die-hard Roughriders fan two years ago, when her sister pointed out the Grey Cup Fit Up to her on Twitter.

Her sister Alisa showed her how CFL.ca’s Brodie Lawson and Davis Sanchez were encouraging football fans to take part in the 100-day fitness challenge that led up to the biggest game day on the CFL’s calendar. The Fit Up only asked that its participants get active for 30 minutes a day and share their progress on social media. 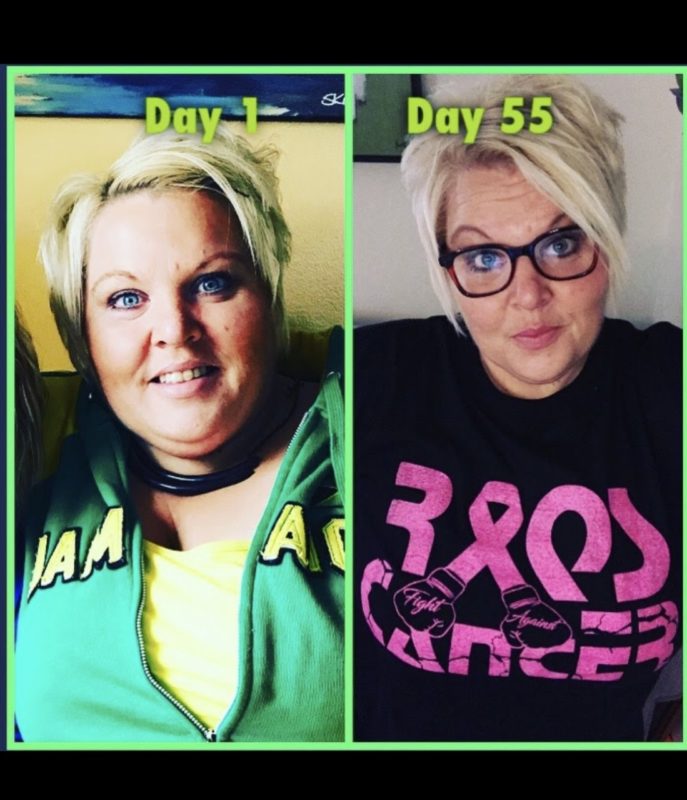 Hansen picture her progress through the first 55 days of Grey Cup Fit Up in 2019 (Photo: Michelle Hansen)

“I’m not someone who is (about) fitness. That’s not my deal, I just live my life,” Hansen, a healthcare aid from Sturgis, Saskatchewan said over the phone. “I was like, ‘OK, let’s do it.’”

Her and Alisa started with walking. First it was short treks, just two or three kilometres a day. She tweeted about her progress.

Along the way, Hansen got one extra bit of motivation.

“I think someone (on Twitter) said, ‘Oh yeah, there she goes again. Let’s see it. She’s said it with her mouth. Let’s see if she’ll actually do it,’” she remembered.

Hansen walked a stretch of highway by her central Saskatchewan home for 365 consecutive days. The walks grew in distance and eventually she was up to 14 and 15-kilometre hikes.

When the Grey Cup Fit Up rolled around last year, Hansen jumped into it again. She’s loved the community aspect of the challenge. Online, she points to a group of CFL fans from across the country that she’s bonded with. She said that in Sturgis, which has a population of about 600, everyone recognizes each other. Her long walks came to be serenaded with the friendly double-taps of horns from vehicles passing by.

She isn’t chasing a certain amount of pounds lost or sizes dropped (though she went down four sizes last year). Above everything else, the routine has changed her life and makes her feel better. That’s all she concerns herself with.

“There’s a handful of people from all over Canada that have followed me the last few years that I want to meet because of this,” she said.

“It’s people who have encouraged me and I also them. It’s unbelievable, the support, the positive feedback, the private messages I’d get. And in my own community…it became a small-town staple to see me on the highway every day.”

The weather took a dramatic swing from August to November, but Hansen wasn’t deterred. The only thing that scared her off of the road through the 100 days was a family of moose crossing in front of her. That and a few stormy days led her to riding an exercise bike or using an elliptical indoors, but she never missed a day. 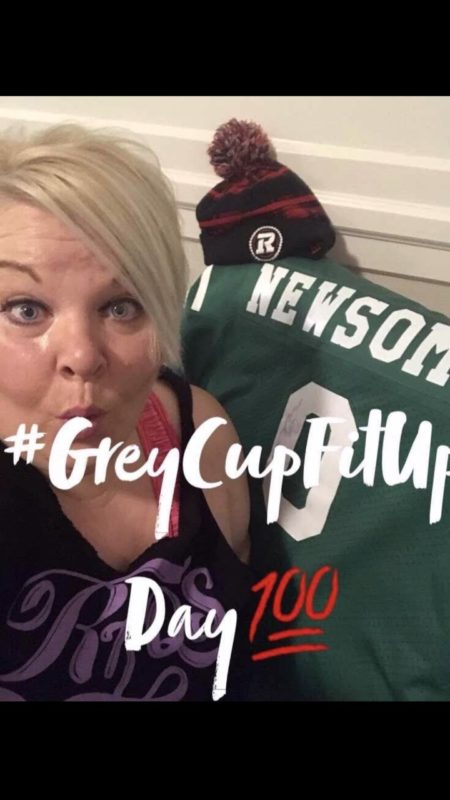 Hansen documented when she finished the 100 days on social media (Photo: Michelle Hansen)

As the 100-day challenge drew to its close last year, Hansen got some unexpected news. Lawson phoned her to let her know she’d been selected from all of the Fit Up participants to receive a three-day trip to Edmonton for the 106th Grey Cup presented by Shaw. Her airfare and hotel were taken care of and she received two tickets to the game. She’d been to the Grey Cup when the Riders hosted in 2013, but had never been to a CFL game outside of Saskatchewan before. She and her daughter Paige met fans and players from across the league and Hansen finally got to meet one of her favourite coaches ever, in the recently-retired Wally Buono.

Hansen will take part in her third Grey Cup Fit Up this year and is promising creative updates on Twitter to chart her progress to this year’s big game in Calgary. For those that may have attempted the challenge in the past, or who might have thought about it and didn’t join in, her message is a simple one.

“I’m proud of anyone that tries it for a day, for a week, for a month. I had a schoolteacher join me about six months into when I first started two years ago and today she looks amazing. I am proud of anyone who starts it for whatever reason they have.”

For the third straight season, Sunlife and the CFL is couting down the days to Grey Cup by encouraging fans to set health and wellness goals and document them along the way by using #GreyCupFitUp. Check out www.cfl.ca/sunlife and download the Grey Cup Fit Up Goal Checklist to assist with keeping track of your goals and also to enter to win a trip to the Grey Cup.