Accuracy Grades: Who was on target in Week 10? 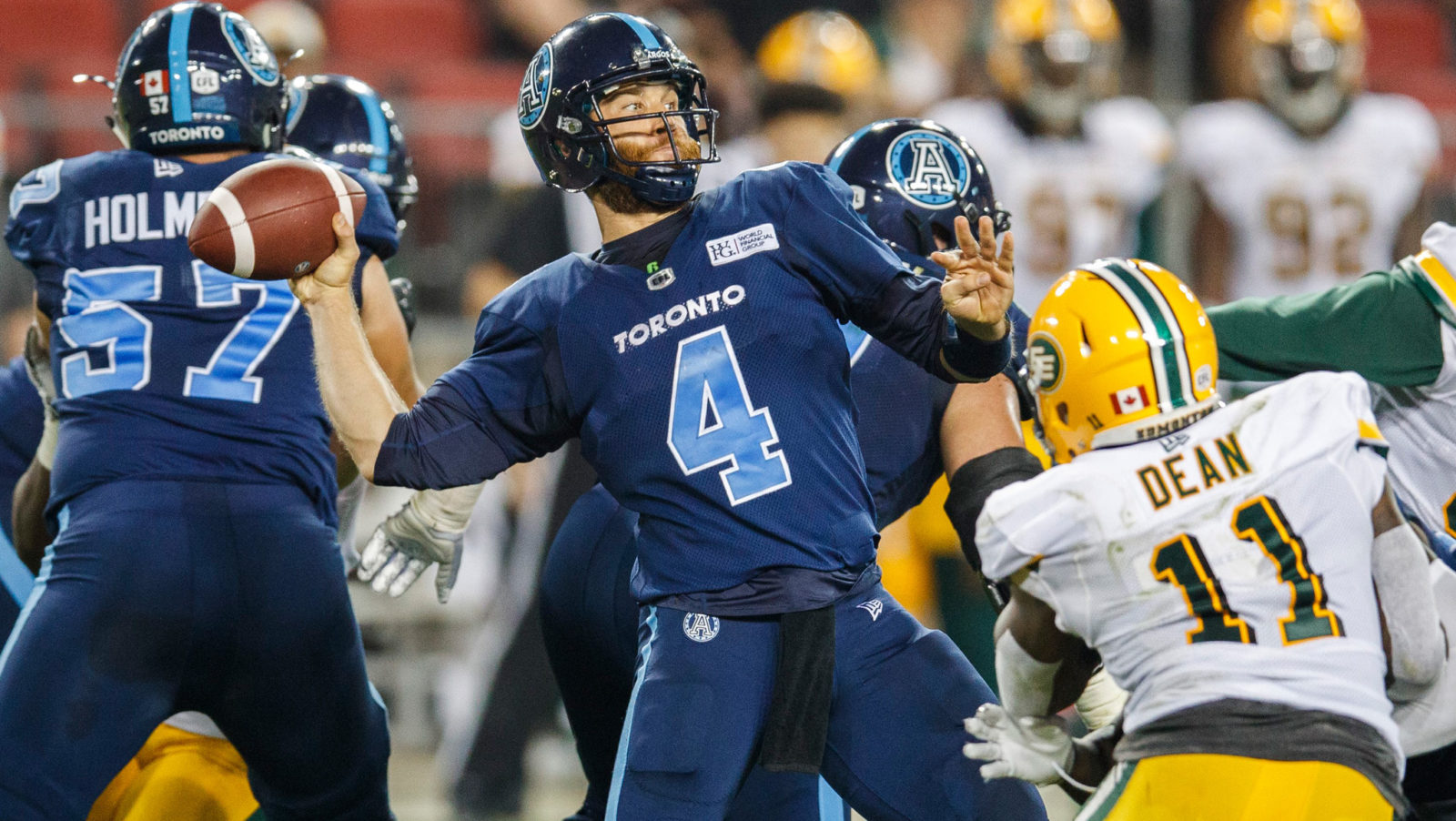 Accuracy Grades: Who was on target in Week 10?

We have almost reached the mid way point of the 2019 CFL regular season which gives all that much more meaning to the accuracy rankings.

They paint the picture of who has been on target and – theoretically – led their offence to success and production by making receivers lives easier and defenders evenings an exercise in patience and frustration management. 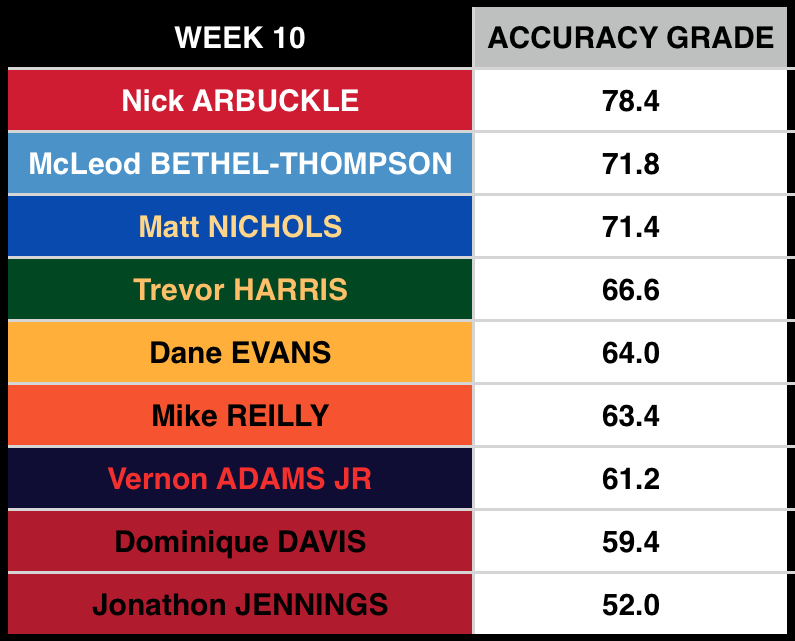 The REDBLACKS pivots brought up the back this week as the Ottawa offence has only created three touchdowns in their last 77 offensive possessions. A staggering number that no doubt helped Rick Campbell’s decision to shake up the offensive coaching staff this week with Joe Paopao taking over play calling responsibilities from Winston October. Let’s see if Paopao can scheme some easier completions for Davis and Jennings to help bump their accuracy grades.

Despite getting the win, Vernon Adams Jr. was once again near the bottom thanks to his occasional recklessness which is the same trait that earned him the victory in Calgary!

Mike Reilly struggled while taking seven more sacks. We shouldn’t be shocked that there is a direct correlation between QB hits and accuracy as Reilly’s pocket continues to be under attack affecting his feet, confidence and timing.

Dane Evans came back to Earth this week for the Hamilton Tiger-Cats. Despite making two top end throws to Brandon Banks and Mike Jones, there were plenty of tosses off the mark for Evans in his third start of 2019.

Rounding out those just off the podium for Week 10 was Trevor Harris, who has already crossed 3,000 passing yards in 2019 and, if not for back to back below average throws on a drive in the third quarter, could have actually graded out in the top three. 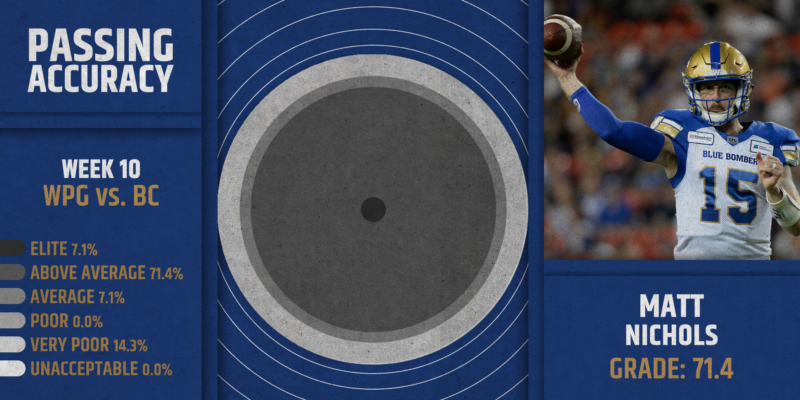 Before getting injured Matt Nichols was once again doing his thing for the Bombers at home. He was playing patiently and striking when the opportunity presented itself. The question now becomes whether or not Chris Streveler can emulate that formula and keep the ball rolling for the blue and gold. 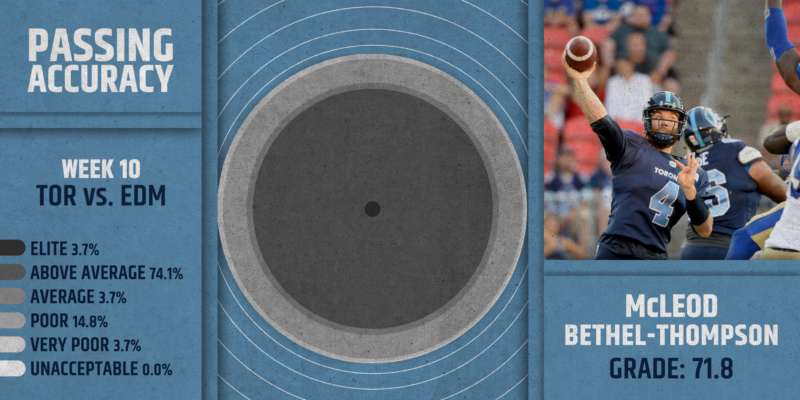 Weird right? Macbeth just keeps showing up in the top three despite results for the Argos as his top end throws tend to make up for any perceived weaknesses. It’s stunning in my first season tracking the weekly grades of CFL passers to see Bethel-Thompson in the top three so often without being able to get consistent wins or crack the top half of the season standings. 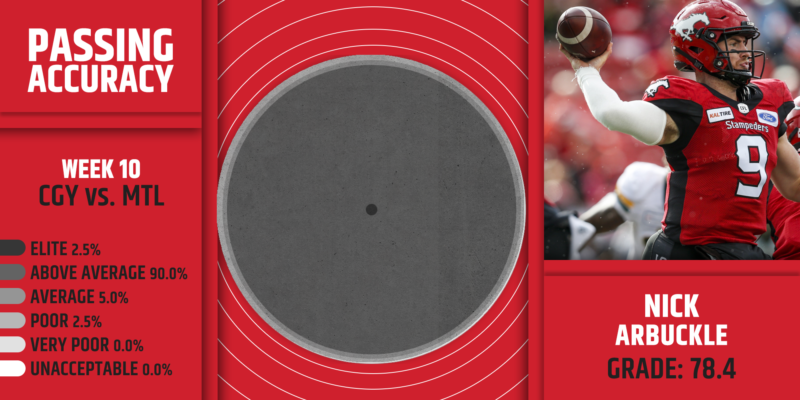 I’m not saying Calgary is a system driven offence, but man does Dave Dickenson ever scheme open receivers in a way that allows quarterbacks to step into throws confidently. For Arbuckle, the key has been the mid-range attack where he has been money to the likes of Eric Rogers and Reggie Begelton. It looks like it will be tough to topple Arbuckle from the season long accuracy standings anytime soon. 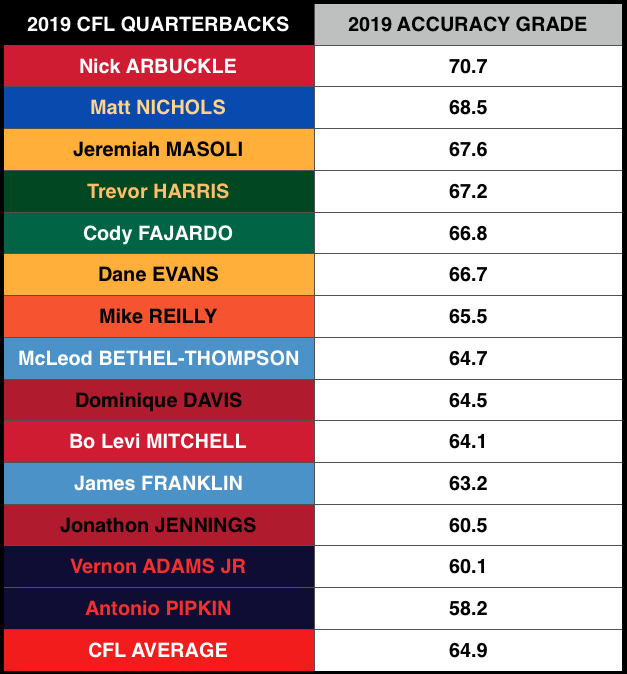 While Matt Nichols improved his season grade (+0.3) Nick Arbuckle hit the accelerator and pulled away from anyone within striking distance this week by jumping from 69.5 to 70.7 (+1.2).

The league average dropped thanks to rough weeks for both quarterbacks in the Hamilton-Ottawa matchup. That was a game that saw Dane Evans drop two spots to idle Cody Fajardo and victorious Trevor Harris.

The biggest riser of the week by ranking was Argos pivot McLeod Bethel-Thompson who moved up three spots from 11th to 8th despite the loss to Edmonton.

Week 11 features Chris Streveler’s first full time duty in 2019, Ottawa’s passing game looking to bounce back against a tough Riders secondary and an East coast throw down between Vernon Adams Jr. and Bethel-Thompson.

I’ll be here early next week to break it all down.