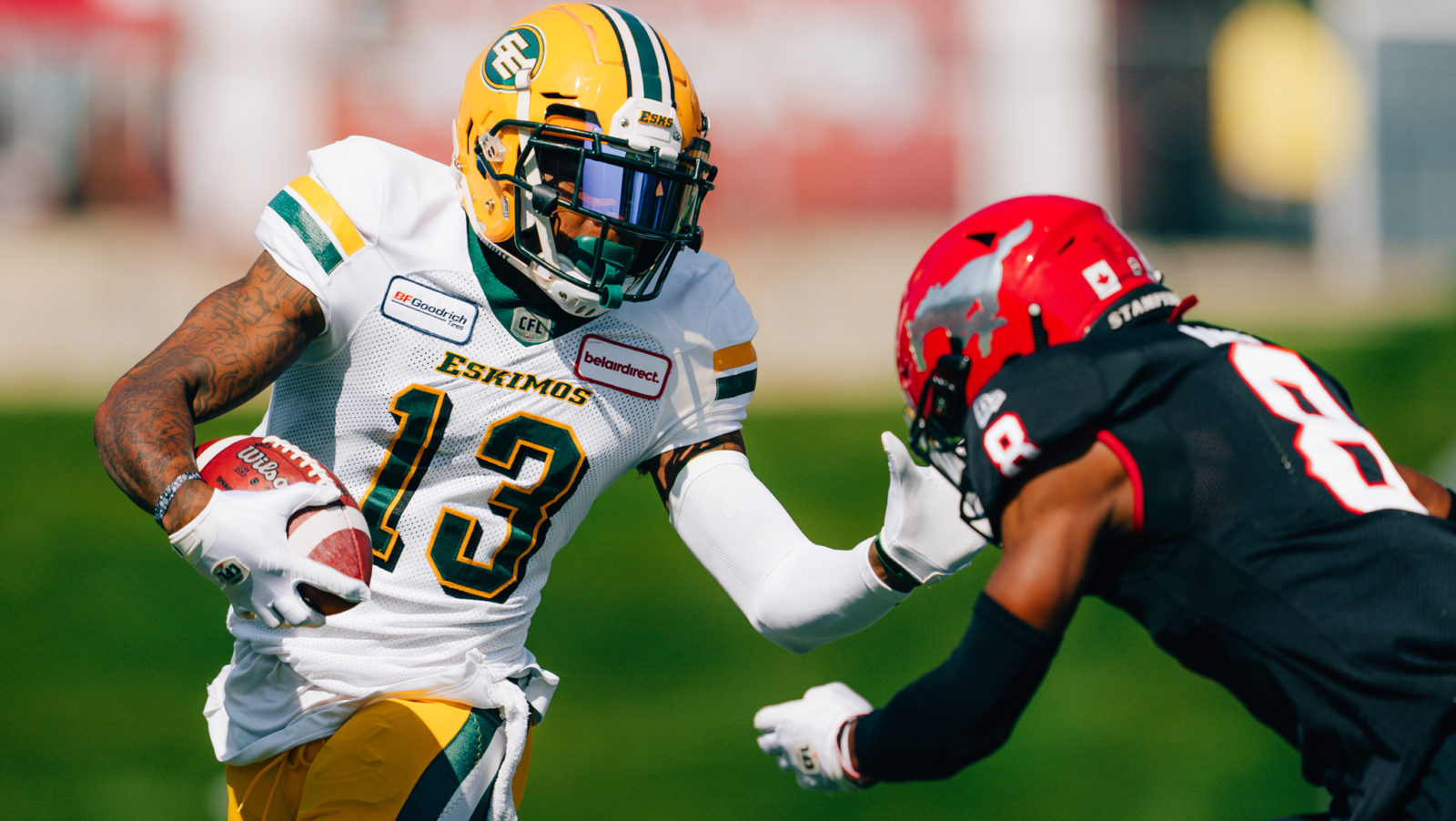 We’ve got a full slate of action in Week 13, and after just one team got a unanimous vote of confidence, a pair of squads have gotten that distinction this time around.

The CFL writers have the Montreal Alouettes and Calgary Stampeders coming out on top in their respective matchups against BC and Edmonton.

In a twist, the Toronto Argonauts have been favoured in their matchup with the Ottawa REDBLACKS. In the other Saturday matchup, the writers are split on who will win the 16th Banjo Bowl.

Here are the picks for Week 13.

RELATED
» Weekly Predictor: Standing with the Stamps
» Total CFL Pick ‘Em: Make your picks for Week 13!
» Be the GM in TSN CFL Fantasy presented by LeoVegas
» The DailyRoto 2019 Fantasy Guide 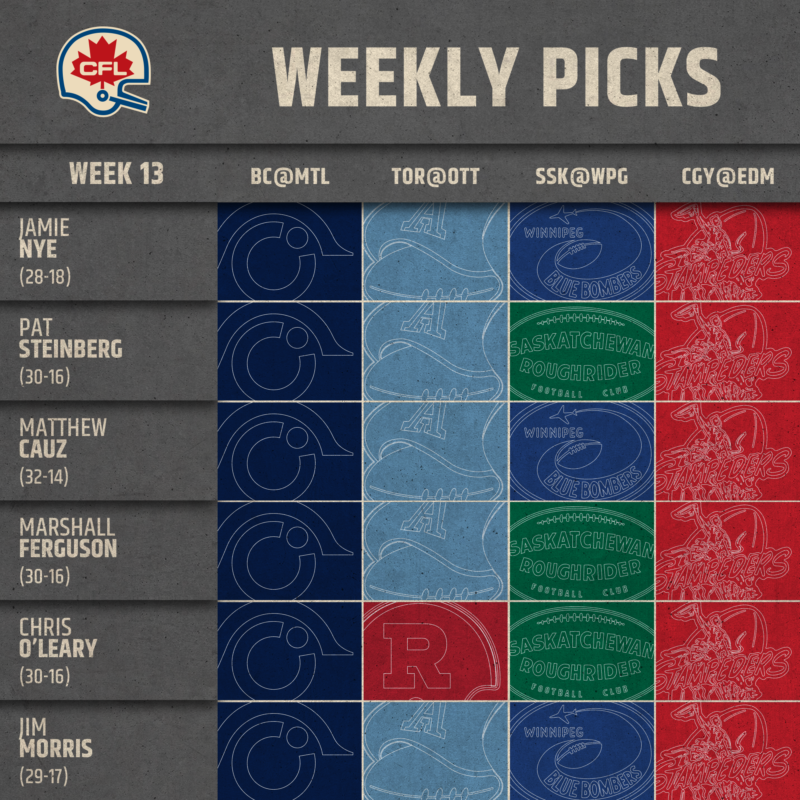 To open the week, a pair of teams coming off bye weeks meet in Montreal.

For BC, the one thing that’s held them back the most this season has been their offensive line, which has given up a league-high 43 sacks on quarterback Mike Reilly. They’ve also allowed seven sacks in a game on three occasions — two of those were in Weeks 10 and 11. Offensive line coach Bryan Chiu was relieved of his duties as a result and Kelly Bates now occupies his position.

Vernon Adams Jr. has been carving up opposing defences as of late. He’s had 742 yards and four scores in the Als’ last two games, which they won in comeback fashion. William Stanback should assume full-time duty out of the backfield once again. He was limited in terms of snaps during Week 11, as he was coming off an injury. DeVier Posey, Eugene Lewis, and Quan Bray have been lethal in the passing game for the Als, and the addition of Chris Matthews could take the offence to an even higher level.

With the way Adams is firing right now, a matchup against the Lions’ defence is too tempting to pass on picking the Als.

The third and final game of Toronto’s swing against in-division competition will see them go head-to-head with the REDBLACKS for the first time in 2019.

Toronto has continued to improve over the last month. McLeod Bethel-Thompson has tossed for 300-plus yards in six of his 10 appearances this season and he hasn’t been picked off in his last four starts. James Wilder Jr. is back in the lineup, and after a quiet Labour Day against Hamilton, he’ll be hungry to have his biggest game of the season. Derel Walker is coming in off a 203-yard, two-touchdown performance in Week 12. His connection with his pivot continues to grow and he could be in for another big showing.

The REDBLACKS are above the Argos when it comes to record, but they’re on arguably the worst stretch of play in the league. Ottawa has dropped seven of its last eight games, and with questions still to be answered under centre, it’s going to be tough for them to get into a playoff spot. Jonathon Jennings was named the starter for this game. He completed 16 of 26 passes for 206 yards and a touchdown after taking over for Dominique Davis in the team’s Week 11 game against Saskatchewan.

Toronto has to have something go their way eventually, right? It starts by trying to win their first road game of the season at TD Place on Saturday.

After a showdown that came down to the last second in Week 12, the Bombers and Riders will run it back on Saturday with the Banjo Bowl on the line.

Cody Fajardo continues to prove himself as the starting quarterback for Saskatchewan. He tossed for 300 yards and a touchdown while completing 25 passes against the Bombers. William Powell had 100 all-purpose yards — with 59 of those coming on the ground — Naaman Roosevelt had 93 yards receiving on eight catches and Shaq Evans caught all six of the balls thrown his way for 81 yards.

Chris Streveler rushed for 65 yards and set a season-high in passing yards with 161 in the loss. Johnny Augustine had 98 yards on the ground, with a 55-yard scamper serving as the highlight of his afternoon. The Bombers’ defence also got to Fajardo five times, forced a fumble, and picked off two passes.

This will be the 16th iteration of the annual game, and the Riders will look to carry their momentum into what they hope will be a seventh straight win.

The second rematch of the weekend will see the Battle of Alberta head north to Edmonton and Commonwealth Stadium.

Bo Levi Mitchell made his return in Week 12 and it didn’t look like he missed a single snap. The 29-year-old completed 19 passes for 263 yards and a touchdown in the Mark’s Labour Day victory, but he was far from the only one that showed up for the Stamps. Reggie Begelton posted 138 yards and a touchdown on 10 catches and Ka’Deem Carey had 143 yards on 16 carries in his return to the lineup.

Edmonton had trouble finding consistency on offence. Trevor Harris had his lowest passing yardage total of the season while the receiving trio of Greg Ellingson, Ricky Collins Jr., and DaVaris Daniels combined for just 158 yards through the air.

Don’t expect this offence to be held in check like that in this matchup. Yes, the Calgary defence is very good, but the Esks are the top-ranked attack for a reason. With Mitchell firmly back in the saddle and Harris looking to bounce back, this could be a shootout.