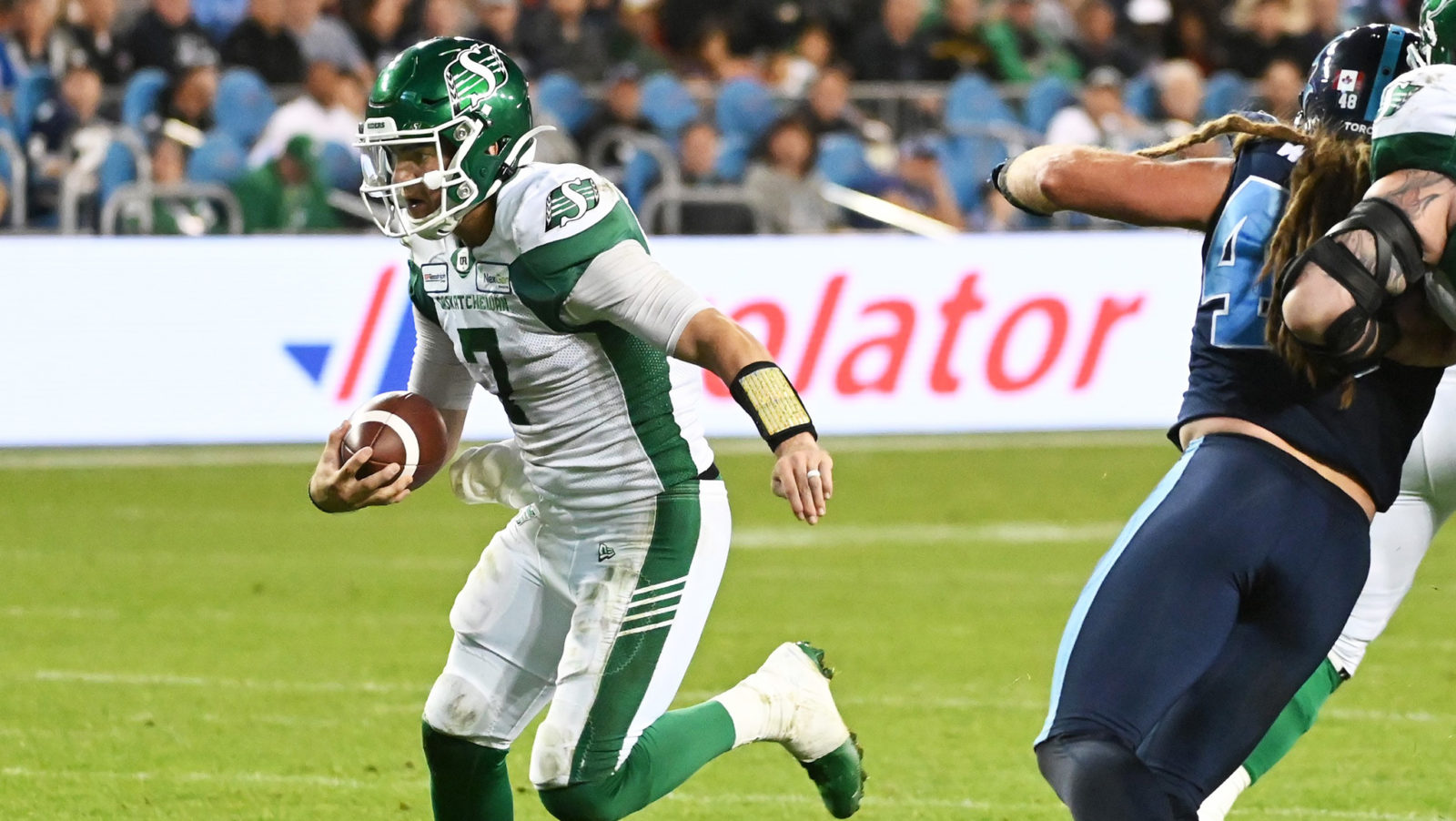 When the ball went up, Manny Arceneaux knew what was about to happen.

The 32-year-old receiver had done this 55 times in his career, to the point where he told reporters after the game that it’s the thing he can do with his eyes closed. Get behind a defence, turn the jets on and by the time the crowd is reacting, it’s too late. Touchdown.

Arceneaux’s fourth-quarter touchdown wasn’t paramount to the final score — his Saskatchewan Roughriders trounced the Toronto Argonauts 41-16 on Saturday — but it felt like it fit the part of a bigger narrative for a team that clinched a playoff spot and moved to an identical 9-4 record with first-place Calgary.

“You just look at my journey, man. Most folks, they told me they didn’t think I would make a return, even play in 2019,” Arceneaux said. His 55-yard catch and 56th career touchdown looked as easy as he described it. It was also his first of the season, as he’s battled back from a season-ending ACL injury suffered just over a year ago.

Riders QB Cody Fajardo said that of the three TDs he threw, that one meant the most to him.

“I know it’s been a while for him. And you could tell that the sideline was so excited for him and to catch a deep ball like that and to get into the end zone, it felt a little bit more personal to me,” Fajardo said.

“He said he almost started crying when the ball was in the air because it was so emotional for him. That’s what football does to you, right? It’s a really emotional game.”

Saturday’s win was expected. The Riders were the superior team in the standings, going up against a now 2-11 Argos team. But so often in those mismatch settings, a young team will play down to the lesser one. There was never an indication of that happening to the Riders.

“We talked about playing to our standard,” Riders coach Craig Dickenson said.

It’s turning out that the standard is remarkably high. There were so many things that could have gone wrong for this Riders team this season. Chris Jones left his many roles (head coach and GM among them) in January for an opportunity with the Cleveland Browns. Zach Collaros was hurt on the team’s first offensive drive of the season, with Fajardo thrust into the starting role.

Instead, Jeremy O’Day assumed GM duties and steered the team through free agency a month into the job. Dickenson has looked like a natural as a head coach. Fajardo has blossomed into a bona fide starter. The loss of Willie Jefferson in free agency has been eased by 35-year-old Charleston Hughes (who got his league-leading 15th sack on Saturday) having the fountain of youth pumped into his shower stall every day.

Add in the quarterback issues that rippled through the West Division this week, with Matt Nichols being lost for the season and Trevor Harris going on the six-game injured list and if they didn’t before, the Riders look like legitimate Grey Cup contenders. And it wasn’t just because they smacked around a two-win team.

“That’s a personal problem for them,” Arceneaux said of the Bombers and Eskimos.

“We just need to continue playing a better brand of football and when we’ve got a team down, continue to keep our foot on their throat.”

Dickenson, a first-year head coach with a long resume as a special teams coordinator in this league behind him, said he uses a lot of college basketball coach John Wooden’s philosophy with his team.

“Our personal best is what we want, win, lose or draw,” he said.

“We didn’t put a lot of emphasis on the score. I thought our guys really did a good job of staying the course and playing hard.”

Fajardo’s a first-year starter but he knows the league well, having won a Grey Cup with the Argos in 2017. He’s seen the benefit that finishing first in your division brings. In their locker room on Saturday night, the team took a moment to celebrate its accomplishment. By the time Fajardo walked out to meet with the media it seemed like he was on to his next goal.

“Our main goal, we haven’t reached it,” he said.

“The guys are happy but we’re going to be really happy when we clinch the West.”

“Everybody wants to contribute,” Dickenson said.

“Sometimes you try to emphasize that they’re contributing even if they’re not seeing it on the field, but to see a guy like (Bennett) get a touchdown, Cam (Judge) get an interception. Got a few sacks tonight, Lavar Edwards was doing a great job up there.

“I think that really reinforces the fact that you feel like hey, we’re contributing, even in practice, and you’re going to get your chance. It’s just a matter of when.”