Accuracy Grades: Who was on target in Week 18? 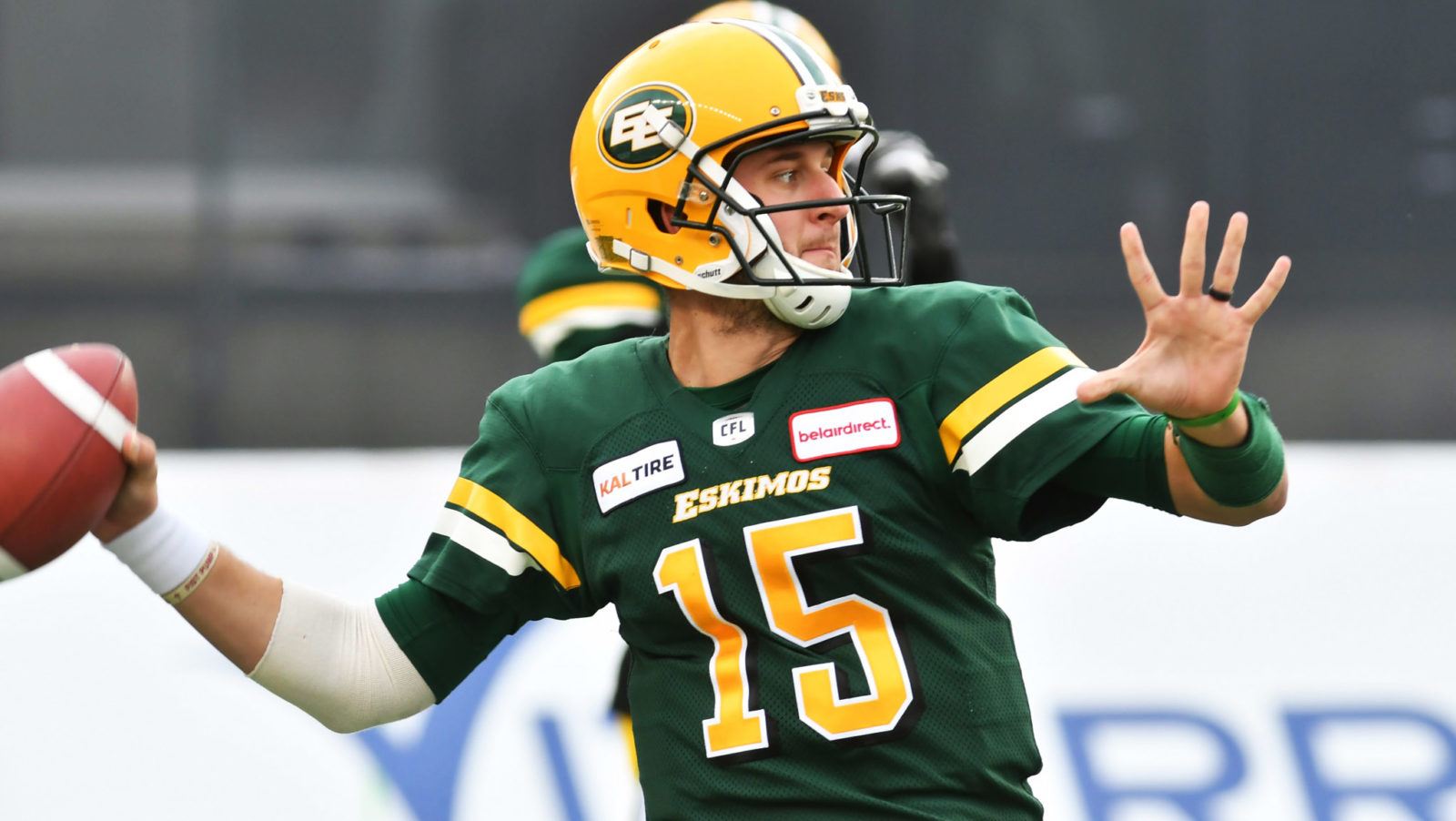 Accuracy Grades: Who was on target in Week 18?

Week 18 saw the fall of Mike Reilly, the return of ‘Elite’ Bo Levi Mitchell and the return to Earth for Montreal’s leading man.

Let’s take a look at how the accuracy grades stacked up: 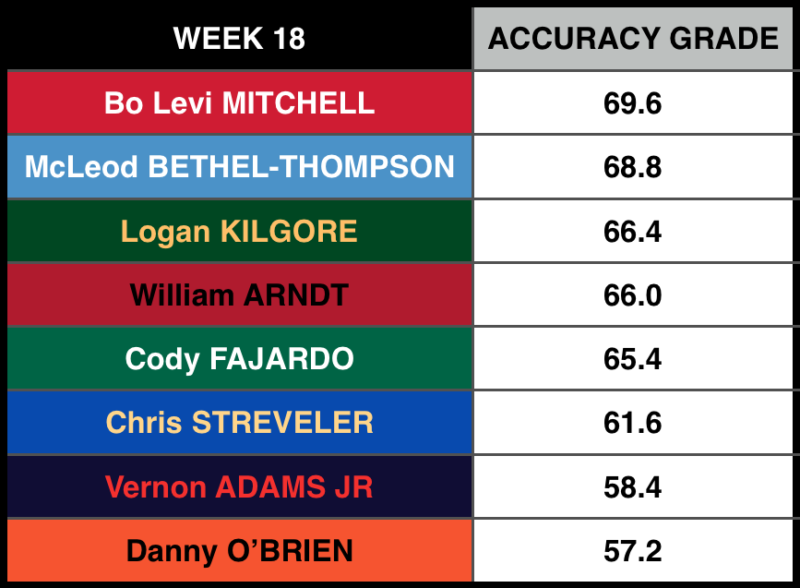 In relief duty, Danny O’Brien stepped up and did his best in trying circumstances on the road but fell short as the BC Lions playoff push came to a close. Who know what could have been if Reilly stayed healthy and in the game..

Just ahead of O’Brien was Vernon Adams Jr., who threw four interceptions this week including one after a sudden change which really killed the Alouettes chances to stun Winnipeg for the second time in as many matchups. For Adams Jr and the Alouettes, it’s all about preparing for a crossover home playoff game now. On that day, Vernon will have to be much better with the football than he was Saturday in Winnipeg.

Chris Streveler and Adams Jr. played shot-for-shot on mediocre pass attempts Saturday but Streveler graded out slightly higher despite both completing under 60 per cent of their passes.

In a loss at Calgary, Cody Fajardo played well and once again battled through road adversity with an approach that will serve him and his team well come November. This game was the first example in 2019 of conditions really affecting the way the ball came out of both quarterbacks hands with Fajardo at times struggling to push the ball.

In his first career start, William Arndt played it safe with 40/42 pass attempts travelling less than 20 yards in the air. This conservatism helped his accuracy grade, but not his cause as the REDBLACKS lost and Arndt pitched three interceptions to a hungry Argos defence.

Now a look at the top three: 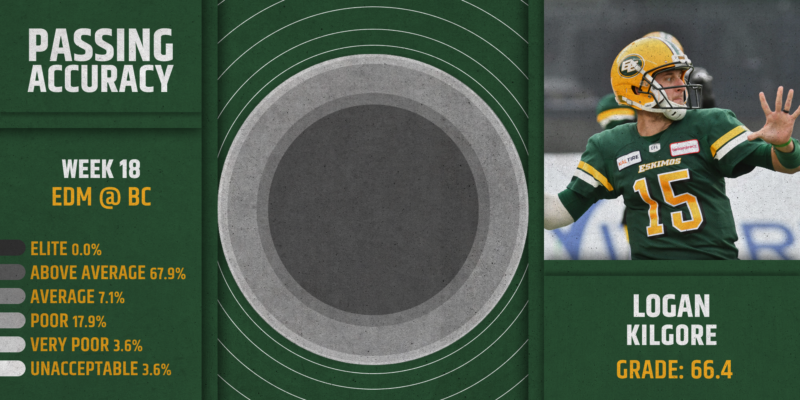 I know right? I didn’t think Kilgore was that on point either on Saturday night but the grading of each throw said otherwise as he squeaked passed Arndt for a spot in the top three. Moving forward, the Eskimos will need more of Kilgore’s toughness and quick decision making in order to cause some nerves in a potential Montreal crossover matchup. 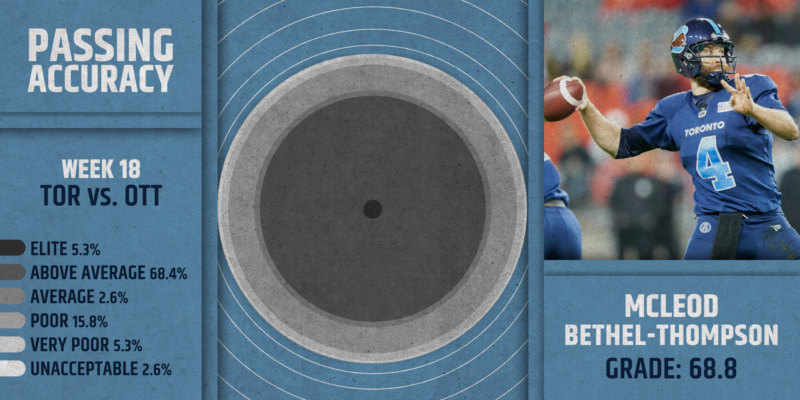 When I heard McLeod Bethel-Thompson was starting Friday against the REDBLACKS I wondered why? If the 2020 season has truly begun as new management says it has then why get more tape on someone you already know so much about when James Franklin or Micheal O’Connor need more evaluation with no better place to get it than live reps?

While I still believe that, McLeod put on a show Friday which – outside of his bad interception on the goal line trying to jam it in – should give Argos fans some positive vibes heading into 2020 with the potential of a 31-year-old passer like MacBeth at the helm. 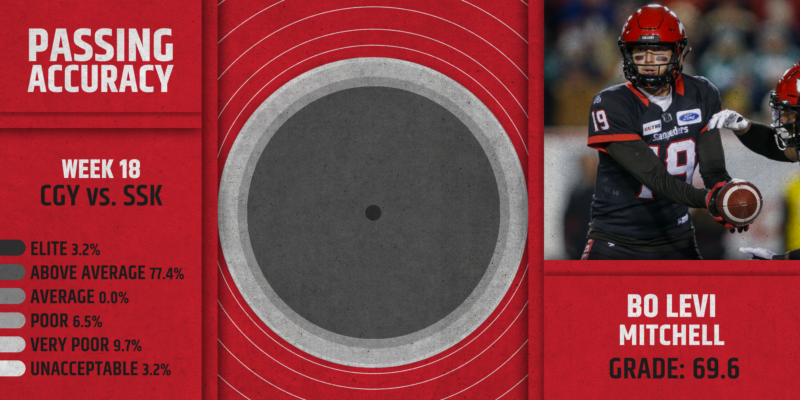 Bo Levi Mitchell’s return from a pectoral injury has been up and down so far but this past week was very much one of the best showings. Week 18 graded out as Bo’s most accurate effort to date and the pop he was able to put on the ball was visually different from Cody Fajardo in the predictably cold Calgary weather. That’s an important skill to have as we head for November 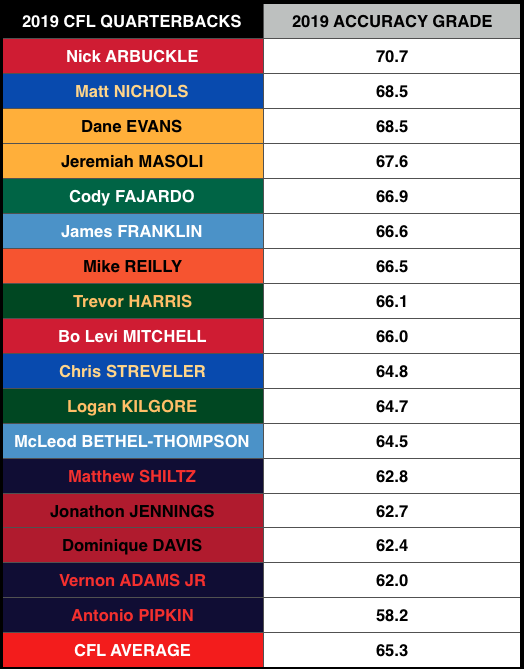 There was no movement at the top as Nick Arbuckle, Matt Nichols and Jeremiah Masoli remain off the field for various reasons while Dane Evans had his final bye week of the 2019 regular season.

In fact, there was no movement anywhere on the big board, just Bo Levi Mitchell making the biggest leap of the week raising his season score by +0.05.