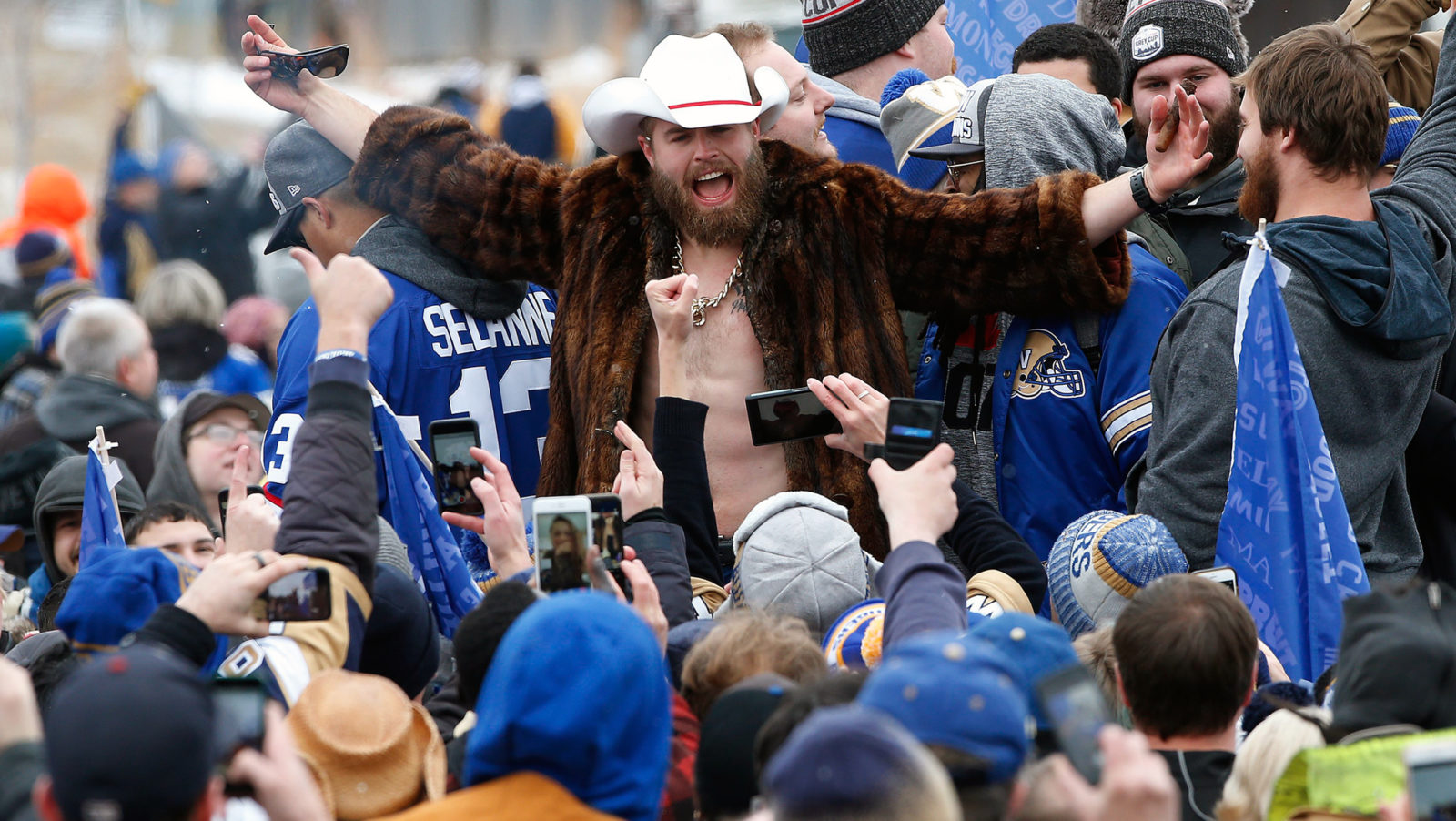 It was a Grey Cup championship parade a generation in the making and clearly, Winnipeg and its beloved Blue Bombers made up for lost time.

Two days removed from ending the longest championship drought in franchise history, the Bombers and their fans celebrated with a parade Tuesday afternoon that began at Hargrave and Portage Avenue, passed through the iconic Portage and Main intersection and culminated at The Forks.

Thousands lined the parade route shouting out thank-yous, reaching in for high-fives and lining up beside the flatbed and pickup trucks for quick selfies with players. There were the customary speeches from the dignitaries, including Premier Brian Pallister and Mayor Brian Bowman, who announced that Chancellor Matheson Road – which leads to the Stadium and the University of Manitoba – would be temporarily renamed ‘Grey Cup Champions Way’.

A shirtless Chris Streveler – wearing a white cowboy hat, a fur coat and jorts – offered up one of the lighter moments.

The day was especially incredible to the Winnipeggers on the team in Harris, Demski, Thomas Miles – who waved a giant Bombers ‘W’ flag for most of the parade – along with Geoff Gray and Brady Oliveira.

Afterwards, as the players gathered back at the locker room to continue celebrating, BlueBombers.com spoke to Harris about the scene and what it represented to the Winnipeg product whose 2019 season featured so many highs amid some difficult lows.

“It’s tough to find words,” said Harris, who was constantly greeted with ‘MVP!’ chants whenever he spoke or was recognized. “Today it finally sunk in. We got on the bus and pulled up and I was anxious to get going. Then we started going down Portage and you see fan after fan after fan… that’s when it sunk in for me.

“It’s been an amazing journey and an amazing ride. To set out a goal and have a vision and to accomplish it all… it’s pretty damn amazing. The whole thing today was insane. There’s been a lot of support through all the things I’ve been through and to be here as a hometown guy, it’s an amazing accomplishment.

Winnipeg’s 33-12 win on Sunday was the 11th in the franchise’s history, but the first since 1990 and that pent-up emotion was palpable on Tuesday.

Today was absolutely insane. Winnipeg you are incredible. THANK YOU. WE ARE CHAMPS! pic.twitter.com/jV504D2oe8

“I knew it was going to be a great turnout and the city was behind us all the way, but to actually see it come to life, it meant the world to me,” said Demski. “I thought everything was going to die down at Portage and Main and it just kept going and going to The Forks and the crowd got bigger. I just appreciate everyone in Winnipeg.”

What. A. Moment.
Thank you, Winnipeg. 💙💛 pic.twitter.com/cVhRJlyJNf

“Obviously it sunk in on the field (on Sunday). You’re out there, the stage is set up, you hold the Grey Cup and you’ve got the hats, you’ve got the shirts on. But honestly, this is the day it actually truly came to life – I’m a champ and we brought it back to Winnipeg, all of us. This organization is great top to bottom. I’m proud of everyone here and to the city. It feels amazing.”

Asked to sum up the whole experience in in one word, Demski added: “Unreal.”

Many of the Bombers players will be heading home for U.S. Thanksgiving on Thursday, while others plan to be out of their temporary accommodations by the end of the month so this was one of the highlights of winning a championship together.

“I’m so happy to bring the Cup back here and see how much joy it brings everybody,” said linebacker Adam Bighill. “That’s really what I’m going to remember forever.”

There will be another chance for fans to celebrate on Friday with a Grey Cup championship social being held at the RBC Convention Centre from 7:30 p.m. to midnight. There will be a live DJ and band and fans will be able to meet players, Bombers alumni and have a chance to have their photo taken with the Grey Cup. FYI, tickets are $20 for season ticket members and $25 general admission and can be purchased at the door or here.