One in the Same: Jackson pursuing passion for football, music 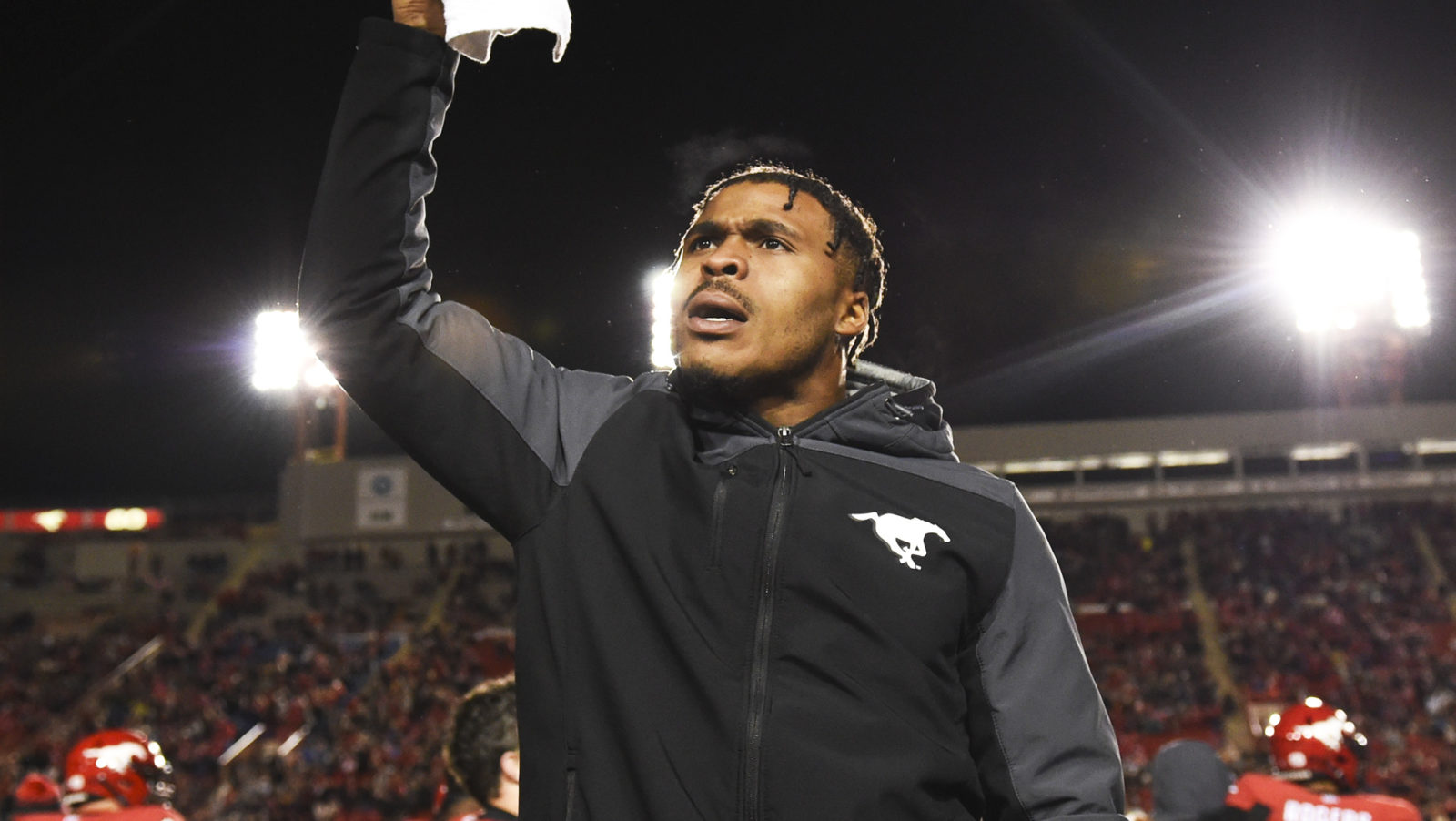 One in the Same: Jackson pursuing passion for football, music

Don Jackson knows what it’s like to play football in front of massive amounts of people.

He’s used to fans watching his every move, cheering for a touchdown and booing after a fumble.

But back in June of last year, nothing could have prepared him for the nerves that fluttered through his body as he was about to step on stage in Calgary to perform his music live for the first time, ever.

“You would think how nervous I was standing behind the curtain, you would think that I’ve never played a football game in front of, I think the most I played in front of was Texas A&M like 60,000 or 70,000 or something like that,” Jackson said over the phone on Wednesday from his off-season home in Ohio.

“And the jitters are different. It’s different jitters, different feels. But then when I get into the groove of it, it becomes the same.”

Picasso Flow is now out on all major streaming platforms. Y’all go get that !

Jackson isn’t just the running back that CFL fans have grown to know and love since he joined the league in 2018. He doubles as a hip-hop artist known as Don Jayy.

The 26-year-old hit the music scene in 2018 – the same year he signed with the Stampeders – and dropped his first project, Jack of All Trades. Jackson used the collection of 10 songs to tell the world of his story growing up in Sacramento, California and the balance between being a football player and an artist.

He then released a single called Taboo in June of 2019, a track that he says is the best song he’s put out to date. He put out another single, Picasso Flow, and the accompanying video (the first visual he has ever done) earlier in 2020.

Football is something Jackson talks about in his music – he has an entire song on Jack of All Trades called One ‘N’ Da Same, about that very topic, spitting the line, “the football and the rap are one ‘n’ da same” in the chorus.

While football and music can be similar, they’re also very different when it comes to execution.

“Football, I can go in and make a play. I go have a bad play, but there’s always the next one,” he said, explaining the differences between football and his music. “With the rap, you can’t make a bunch of mistakes, because you get up there, and you’re a lyricist, but don’t know your words, or a lyricist and you don’t sound right in the pocket, then you get upset and then it’s a bad performance.

After the success of his first performance, Jackson hit the stage once again in Calgary a few months later. It was that moment, after feeling the energy from the crowd, that he knew he was meant to balance both.

“I’m going to always keep (football) because I lean on my work ethic with football,” he said. “I’ll never let that stuff just sit on the side. Football is always going to be there.

“But after those two things, those two opportunities, I was like, ‘this music stuff is really, really for me.’ I thought it was for me when I dropped mixtapes and all that but the feeling when I got to perform on a stage in front of a bunch of people and they’re messing with me? That was dope.”

The five-foot-10, 205-pounder has been able to find a perfect balance between his two loves. He finished up his second season in Calgary before signing with the Hamilton Tiger-Cats as a free agent last month, while also working on his new singles and an upcoming project.

A move to the East was something that Jackson really wanted so he could be closer to his family and his son, Tajae, who turns one next month, in Ohio. Winning another Grey Cup was on his mind – he won the coveted trophy in 2018 in his rookie season – but he also wanted to join a team that would put him in a place to be successful. Hamilton was the perfect fit.

“I wanted to go to a place that I feel that they would have a plan, that they would have a plan for me,” he said. “And not just for me to succeed, but how can I help the team succeed? How can I get the team to the next step or to the next level? And also Hamilton was the easy choice as far as the pieces they have around offensively and defensively.”

Jackson remembers watching film on the Tiger-Cats while he was in Calgary, and more specifically what offensive coordinator Tommy Condell did with the offence. The creativity was intriguing and he wanted to be part of it.

Jackson talked to as many people as he could in the process of deciding on becoming a member of the black and gold. He relied on former teammates, like Tunde Adeleke and Ja’Gared Davis – who didn’t know he was going to return to the Hammer at the time of talking to Jackson – to give him the inside scoop on the Ticats. He also had a conversation with Courtney Stephen, who is heading back to Tiger-Town after a year in Calgary. 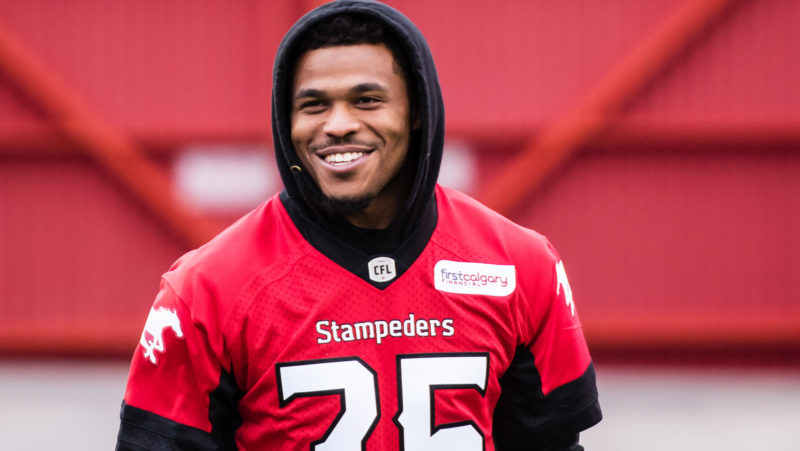 After spending two seasons in Calgary with the Stampeders, Don Jackson is headed East to Hamilton (Stampeders.com)

Over two seasons in the CFL, Jackson has suited up in 20 games and carried the rock 218 times for 1,170 yards and five touchdowns. He was limited to seven games in 2019, after missing time with injuries and even when healthy, the Stamps went with the hot-hand of Ka’Deem Carey instead.

Now a member of the Tiger-Cats, and looking to get back to his rookie form where he was on pace for over 1,200 rushing yards, Jackson’s come a long way from recording music in his mom’s garage and posting it to audio distribution platforms hoping for his big break 10 years ago. He says that old music had no substance to it, and jokingly pleaded for me not to go searching for it, but it was all about getting reps, just like in football.

With Hamilton a short drive away from Toronto, a city with a massive music scene, he knows that he could use the change of scenery to get more reps on stage as he continues to grow as a football player and an artist.

“Calgary opened so many goddamn doors for me as far as music and it was kind of something I put on the back burner when I was deciding this whole football thing. I was thinking (music and football) are two separate things,” he said.

“And then when I got closer to making that decision, I was like, “that is Toronto, about 45 minutes away (from Hamilton). If you were pushing your music in Calgary, who knows where it could go if you could find the hip hop scene in Toronto?'”