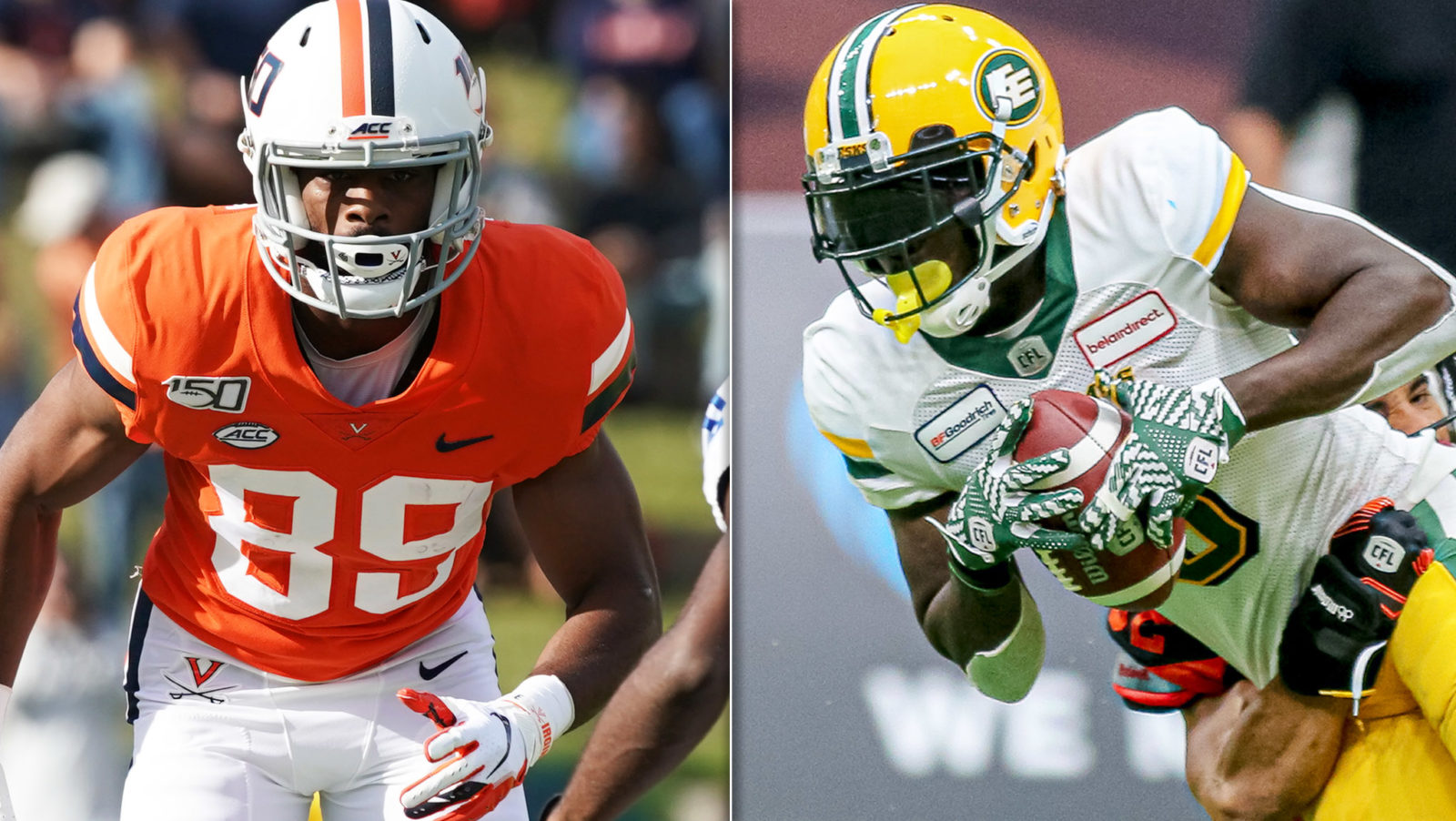 When Dejon Brissett logged onto Zoom on Wednesday for his first official meeting with the Toronto Argonauts receiver group, he took a look around at who else was on the call.

The likes of Juwan Brescacin, DaVaris Daniels and Chandler Worthy were all on the video chat, calling in from where they have been social distancing across North America. The pass-catchers and their coaches wasted no time diving into the X’s and O’s of the playbook.

As things started to get going, there was one player that Brissett, who was drafted second overall by the Argos last Thursday, still couldn’t believe he was looking at. That was his longtime friend and mentor, Natey Adjei.

“I saw Natey on Zoom. And it’s like, wow, I’m really teammates with Natey right now. It’s crazy,” Brissett said over the phone on Thursday from his home in Pickering, Ont.

“It really hasn’t hit me. But it hasn’t hit me yet because I haven’t seen him. Once I see him in person, there’s going to be a new kind of like, we’re just in a new realm of friendship.”

That friendship began years ago, before Brissett had even started playing football full time. Both were training at the same gym in the GTA, along with a number of other CFL players. Brissett, who was 15 at the time, was playing basketball and hadn’t realized his passion for football just yet.

He would join the CFL players in their workouts, training alongside them and putting in just as much work. That caught the eye of Adjei and started what would become a close friendship.

“I kind of took a liking to him because he was in there and he was grinding harder than or just as hard as anyone else in there,” Adjei said. “It’s kind of funny, because I’m like, ‘When I started the gym, I was 15 years old too, but obviously my goal was to play football, but you’re in here playing basketball and you’re training like a football player.’ I always thought that was super inspiring.”

“Natey told me right away,” remembered Brissett. “I could be really good and that I should start playing football.”

Brissett took that advice and when he headed to Lake Forest Academy in Illinois, he picked up both a football and basketball. He was a dual-athlete, playing both sports until he decided that he should focus on just one. In his senior year, football was his choice. 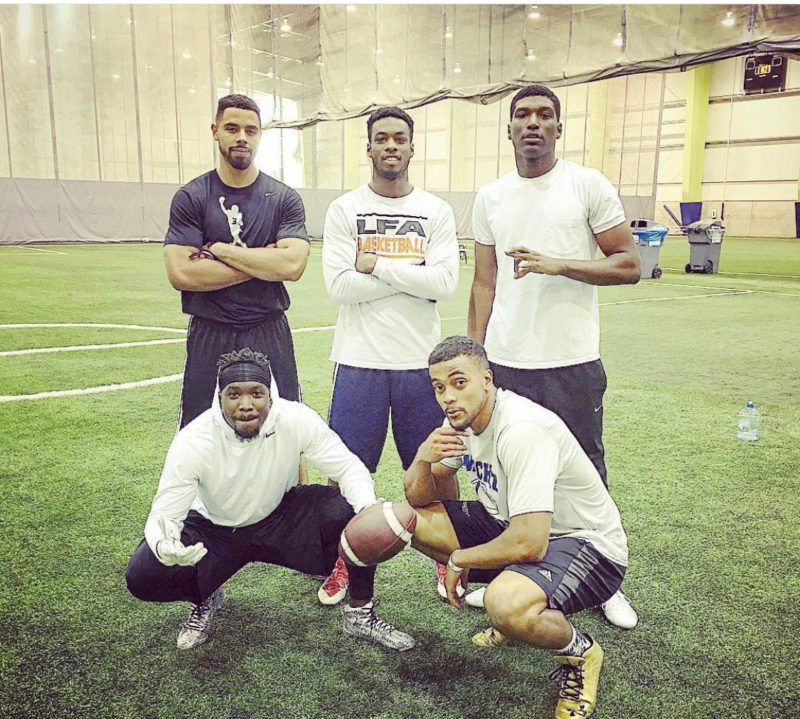 Adjei got a phone call from Brissett’s mom in 2014, his first year with the Argos, and she asked him if he would train her son. She told him that Brissett wanted to play football full time and even offered to pay him for his services. Adjei refused. “That’s like my little brother,” he said.

So the training began.

Adjei would finish practice with the Argonauts and then bring Brissett out to a field. He’d ask a backup quarterback to come too, since they needed someone to throw balls to them while they worked on their routes.

“Obviously with him being super raw, he doesn’t know what he’s doing yet but you can see the athleticism,” Adjei remembered about his first training sessions with Brissett. “You can see that he can go get the ball you can see he’s fast and he’s going to be tall.

“He gave me a lot to work with. I’m just so happy to be a little bit part of his success because like I said, that’s like my little brother”

—-
It’s funny how sometimes life works out just how you would have hoped. Like a perfectly executed play when everything goes exactly right. You beat the defence, you run a perfect route and you find yourself in the end zone scoring a touchdown.

That’s how things worked out for Adjei and Brissett.

This off-season, Adjei was released from the Eskimos, something that he says he didn’t see coming at all. But he wasn’t a free agent for long, signing a deal with his hometown squad, the Argonauts.

Brissett was a highly-ranked prospect ahead of the CFL Draft and had garnered interest of a number of teams across the league. He saw both versions of the mock drafts on CFL.ca, where he was projected to be selected by Toronto in the first edition and Hamilton in the second. But despite all of that speculation, he didn’t have a clue where he was going to go.

When draft day came around, Brissett was joined by his mom, his brother Oshea, who plays in the Toronto Raptors organization, and his younger sister as they awaited his fate.

He watched as the Calgary Stampeders traded away their first overall selection to the BC Lions. He heard linebacker Jordan Williams‘ name called first. And that’s when he got nervous.

“My palms were sweating a little bit after the first overall pick, because I heard Toronto (was next), so I was excited to see what they were going to do,” Brissett remembered. “And then I saw my phone ring and I knew, I have Pinball’s name in my phone, so I knew it was him. I was just like, ‘Man, this is it. If he tells me what I want to hear, I’m going to go second overall.’

“And he did and I got a huge smile on my face. My mom could tell that it was good news by my expressions, so she was going crazy. My brother was going crazy recording and it was just, it was great.”

And just like that, Adjei and Brissett were teammates.

The pair plans to enjoy that moment together. All of their hard work over the years was about to pay off and they wanted to share in the excitement together. Because of the COVID-19 pandemic and social distancing, they decided to jump on a Zoom call, like many of us are doing to check in with our friends and family.

But what they didn’t expect was for things to happen so suddenly.

“He got drafted so high, we couldn’t even connect on the Zoom call,” laughed Adjei. “I was getting set up to call him on the Zoom call, the first pick gets going and then second, he’s gone!”

They, of course, texted each other after the fact, which wasn’t anything new for the pair. They talked often over the years, as Brissett, who is the oldest of his siblings, looked to Adjei as a big brother. Adjei would give Brissett advice about life, girlfriends, being a Canadian living in the United States (Adjei went to college at Buffalo), how to deal with teammates and everything in between.

Even before the draft, the pair had talked about which team would come calling on draft day. Adjei speculated that it made complete sense for the 23-year-old to go to Toronto.

“I didn’t know he was going to go that high,” admitted Adjei. “But the more you kept reading into it (it made sense),” he said. “He’s like, ‘I don’t know where I’m going to go. I’d be happy to go anywhere.’ But I was like, ‘I think it makes sense for you to go to Toronto. Everything is setting up. The storylines, marketability, the philosophy of the team, everything is lining up for you to go here.”

“It was almost like the stars just aligned,” said Brissett. “So many good things come with me being here, outside of the opportunity for me to play football. My family gets to watch, a lot of my family has never seen me play before. I get to be in the same city as my brother, I get to be home for a long period of time. This is the perfect situation and it all came down to that moment when they drafted me, it was like ‘Wow, you couldn’t have written this better.’”

It may not have been the plan, or perhaps it was all along, but it appeared that when Pinball took over as the Argonauts GM, he wanted local products on his roster.

“I’ve always talked about it for years because the GTA has, for me, the best Canadian players talent-wise, and I’m biased,” he said. “But I felt like, what would happen if we were all on one team, all on the Argos? What would happen marketability wise, just having extra fans in the stands because obviously your family is in town and probably going to want to see you play.

“And just the pride of having the guys put on their home colours. I thought that would be the best way to go. I always thought about this in high school and college and I’m like, ‘Why doesn’t it happen?’ But I’m so excited that Mississauga native Pinball Clemons has made it happen.”

Getting Brissett was the perfect pick for the Argos; a skilled receiver that will add National depth to Toronto’s receiving corps and could play behind Adjei or Brescacin, if those two indeed start this season.

The selection was perfect for Brissett as well. Not only does he get to play for his hometown team, a dream that many athletes have, he’ll get to learn the ins and outs of the Canadian game with one of the most important people in his football journey.

“I was always looking up to him because he was at Buffalo and the he got drafted to Toronto,” Brissett said. “He lived out the dream already, so I was always in communication with him throughout my years in high school and college. He’s just been probably one of the most important pieces of my development as a football player.

“Especially in high school, I’d say he’s the most important because he really showed me the art of running routes and all of the nuances of the game and I attribute a lot of this to him, honestly.”