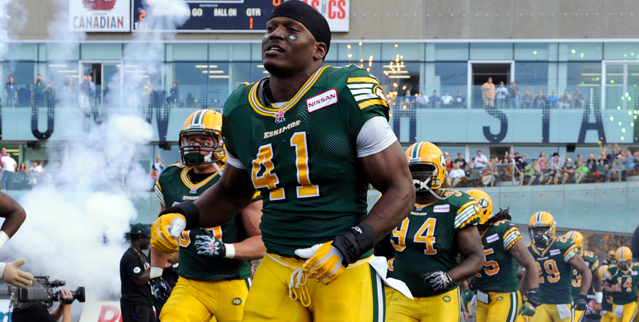 When the game was over and some history had been made in Edmonton, I remember being fixated on perhaps the wrong thing.

The Esks had just blanked the Saskatchewan Roughriders 24-0, pulling themselves out of something of a funk that had seen them drop three of their last four games. His broken finger healed, John White put up a career day, rushing for 192 yards and scoring two touchdowns. Mike Reilly added another 100 yards on the ground, exposing the Riders’ defence.

For a reporter, the go-go-go pace of the post-game sometimes forces you down the simple path for a game story. Edmonton needed to get back to its winning ways and did it with the ground game. That’s essentially the game story that I wrote that day. What hindsight tells you is that we got a glimpse of an Edmonton team at its most lethal, playing a near perfect game. They were still a year away from winning a Grey Cup, but that shutout win — the first the Riders had suffered in an astonishing 514 games — was a sign of things to come for that group. 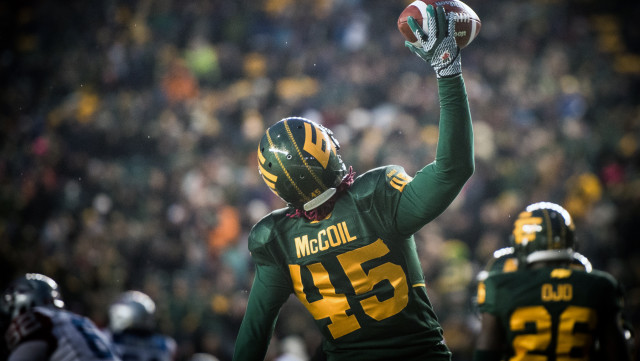 Dexter McCoil would go on to win rookie of the year in 2014, establishing himself as a key part of a Grey Cup-bound Edmonton squad (Johany Jutras/CFL)

Almost six years later — in a performance you can see tonight at 11:00 p.m. ET on TSN1 — the performance of Edmonton’s defence stands out. With Darian Durant out for the season at that point, Saskatchewan shuffled between quarterbacks Seth Doege and Tino Sunseri. Neither were equipped to deal with a Chris Jones-led defence. Edmonton had six sacks, a forced fumble, five knockdowns and two interceptions.

“The goal in the fourth quarter was to keep them to zero,” Aaron Grymes said that day, after pulling in one of the team’s two interceptions.

“We got challenged by the coaches to finally play a complete game. To us, that meant keep them at zero in the fourth quarter.”

As his reputation as a defensive coordinator and eventually as a head coach grew in the CFL, the complexities of Jones’ defences became increasingly well-known. During a watch party with Argos season ticket holders in April, Ricky Foley went into details on the process that came with learning Jones’ schemes. He felt that the 2012 Grey Cup-winning Argos squad didn’t come together defensively until late in that season.

Hosting the Riders on Sept. 26 — and keeping the team’s QB situation in mind — that edition of a Chris Jones defence clicked in a late-season game and showed what it was capable of and what it would do more consistently the following year.

Edmonton’s offensive game against the Riders wasn’t a glitzy, highlight reel-ready aerial assault. It simply found the spot in its opponent to attack and went after it.

“To come out against a West Division opponent and very good football team and have all three phases play a good football game was nice,” Mike Reilly said, after making 14 of 25 passes for 124 yards with a touchdown.

“That’s the type of thing you have to do every game going down the stretch because they just get harder.”

That Edmonton team arrived that season. After a disappointing 2013 campaign that produced just four wins, there were immediate signs of growth under Jones and the Green and Gold morphed into a Grey Cup contender by season’s end, finishing 12-6. Despite all of the growth, there was an obvious roadblock in their way. The Calgary Stampeders accounted for half of those losses that year and ended Edmonton’s season in the West Final. Calgary would take the final step in their journey a week later, winning the Grey Cup against Hamilton at BC Place in Vancouver.

In that shutout against the Riders, though, you could see what Edmonton had. There was an elite defence that still learning at that point, but would grow into a unit that was capable of winning games on its own some weeks. There was an offence led by an MOP-worthy quarterback, surrounded by all-star calibre receivers and running backs. There was a special teams unit, led by Craig Dickenson and a Swiss army knife-type player in Kendial Lawrence that could change a game in an instant. It didn’t all come together for them until 2015, but you could see that something special was brewing in Edmonton.

In front of a crowd of 42,161 at Commonwealth Stadium, it was on full display that late September day in Edmonton.