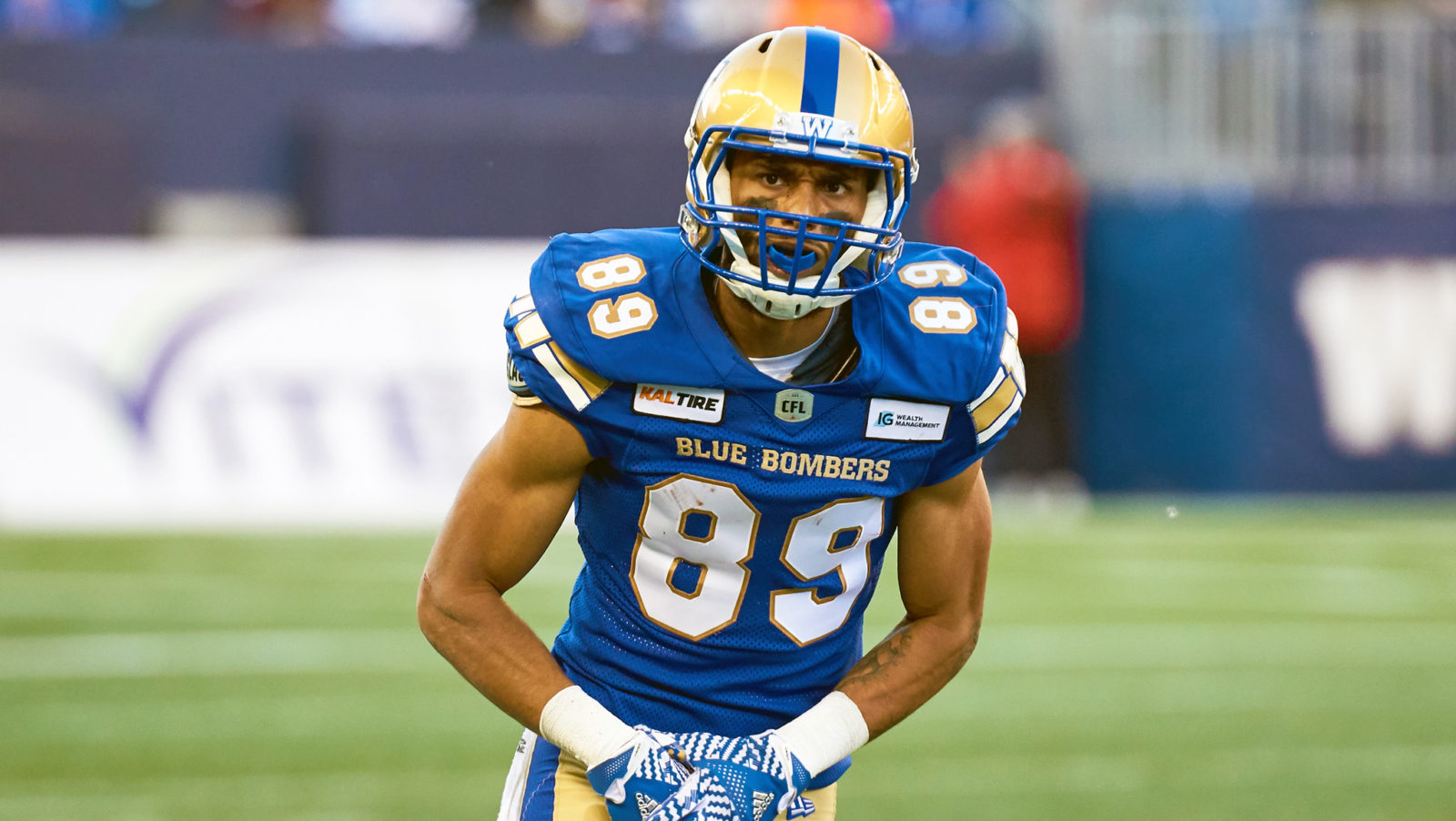 At this time two years ago, Kenny Lawler was assessing what his next move would be after becoming a free agent.

Fast forward and he’s one of the most exciting talents currently in the Canadian Football League.

The 25-year-old got his opportunity to be a regular contributor for the Winnipeg Blue Bombers in 2019, and after showing out last year, it looks as though he’s just scratching the surface of his potential. 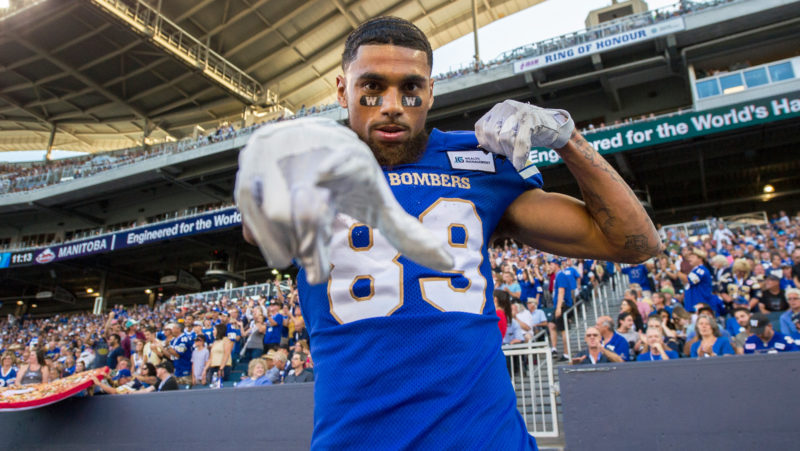 The former seventh-round pick of the Seattle Seahawks graduated from the University of California and was considered to have some of the best hands in the draft class by pundits.

After being released from the Seahawks’ practice squad in September 2017, he had a period of time where he weighed his options and wondered where the next stop on his football journey would be.

While he was in camp with Seattle that year, he was searching for some football to watch and came across a CFL game on YouTube. That’s when he started to learn about the CFL.

Lawler’s rights belonged to the BC Lions. He came to terms with the team and made his way north, but he’d be released before the first game of the season.

He’d spend the majority of that campaign waiting for another opportunity.

“That was a very tough time in my life,” Lawler said. “I was cut, I didn’t play a full season. I had gone up to BC and I’d torn my hamstring. They had said in six weeks, they were going to bring me back, and I thought, ‘OK, at least I’ll have an opportunity. But then six weeks turned into much longer and Winnipeg came along.

“So I just talked it over with my family and my agent and after what had happened with BC, I just felt like the opportunity was greater there. I had the opportunity to start fresh and make a great first impression of what I could do for the team.”

The Blue Bombers signed Lawler to a deal at the tail end of the year, giving him the chance to work on the scout team in practices.

As a player that was new to the league, he was able to lean on some of the veteran players in the Winnipeg receiving room.

Lawler said that Darvin Adams and Drew Wolitarsky both helped him out immensely when it came to learning the waggle and other nuances of the Canadian game along with the playbook.

When 2019 rolled around, he got an extended chance to prove that he could be a weekly contributor.

He was named one of the team’s starting slot backs for the opening game of the season. It took him just three games to have a breakout performance, as Lawler hauled in five of his seven targets against the Ottawa REDBLACKS for 83 yards and his first career touchdown.

He continued to be consistent in the passing game, posting a 61-yard outing against Saskatchewan on Labour Day. But in Week 16, Lawler exploded for 10 catches and 144 yards against the Hamilton Tiger-Cats.

“It’s not every day that you have 10 catches. I feel like if any of our receivers had that same opportunity, they would’ve made the most of it. It just happened to be me that day,” Lawler said. “Going forward from that game it was like I was still a rookie, but I knew I had it in me now. There were sparks or glimpses leading up to that game. It was like a point of arrival in for me in the CFL.”

For Lawler and the rest of the Bombers’ receivers, they had to learn the different styles of three different quarterbacks who started for the Blue and Gold in 2019. Matt Nichols’ injury in Week 10 made Chris Streveler the starter down the backstretch of the season, but Winnipeg got some insurance in the form of Zach Collaros.

The latter two served as the team’s one-two punch heading into the playoffs.

“Just being a part of it, it was just amazing to see how the team rallied around Strev. Because we knew that he had it in him to take over the team and be that leader,” Lawler said. “Then we trade for Zach and that boosted our offence to where we needed it. Being able to have an experienced quarterback through a key part of the postseason.

“It felt like he was only here for two weeks, but then he became the starter. That just boosted our confidence going into the playoffs because we’ve got Andrew (Harris), we’ve got our O-line, we’ve got Chris Streveler who runs through people like he’s a running back and then we’ve got a quarterback who stretches the field.”

The Bombers were able to make it into the playoffs as the third seed, leaving them with the task of going through both Calgary and Saskatchewan in order to make it to the 107th Grey Cup presented by Shaw.

With Paul LaPolice going to a two-quarterback strategy in the Western Semi-Final, the Bombers’ offence was firing on all cylinders, as they rolled over the Stampeders before pulling out a huge victory at Mosaic Stadium a week later to advance to the title game.

Just a day after their big win, the Bombers were on the way back to Calgary for the biggest game of their season.

Following a week of hype and practices, the game rolled around and it was the Bombers who came out flying. Lawler finished the game with three catches and 52 yards. Both quarterbacks were rolling and the defence put on a masterful performance, holding the Tabbies to just 12 points.

“Just thinking about it now, it gives me goosebumps,” Lawler said. “Just to live in that moment, it was such a great experience. We put in so much work in the film room and individually in that week of preparation. We prepared the best we could. The coaches were on point and the players were on point.

“It was just infectious. There was something in the air and it felt like if you were a Winnipeg Blue Bomber, we knew that we were going to win and we knew what was going to work from that preparation.”

Lawler was able to experience a championship victory with his teammates and take the championship back to Winnipeg, who hadn’t seen a title in 29 years.

Just one full season into his career north of the border and Lawler can say that his name will be forever etched in league history.

“To be able to look at the 2019 champions and know that I’m going to have my name on the trophy, it gives me goosebumps, really. The work that we put in through that whole season, that’s the ultimate feeling and the ultimate goal that you want to get to.

“Not many people are able to achieve that in their football career. I feel very grateful to be able to call myself a Grey Cup champion. Now, I hold myself to a standard and I know what it takes to be there. I’m going to hold it very highly. I’m a father, I’m a husband, I’m a Grey Cup champion.” 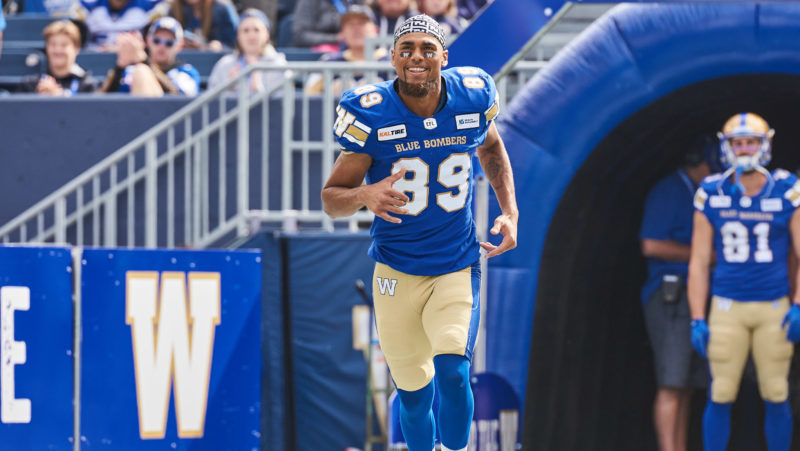 Kenny Lawler was named Winnipeg’s Most Outstanding Rookie for his efforts during the 2019 season. (BlueBombers.com)

Heading into the 2020 season, the Bombers will have a new look on offence. Collaros take the reigns as the starter with Streveler and Nichols departing. With Paul LaPolice becoming Ottawa’s head coach, Buck Pierce will move from quarterbacks coach to offensive coordinator.

Lawler said that it should be easy to pick up any new parts of the offence with a familiar face taking over the playcalling.

The pass-catcher is itching to get back to football. He’s back home in California for the time being, trying to get in workouts without gyms being available. He tries to go on runs or to the park.

On top of that, Lawler also has his son, Kenneth James Lawler II, keeping him busy — he added that it’s been good cardio work.

With 43 receptions for 637 yards and four touchdowns in his first 16 games in the CFL, Lawler has set high expectations for himself, and for good reason. He has the ability to be a problem in any facet of the game. He can beat you deep or battle through the middle of the field for hard-fought yardage.

With a new season and some extra opportunity to showcase himself, Lawler looks poised to be one of the breakout stars in 2020.

“I put some high expectations on my shoulders because I believe that I can be that guy. I can be a number one and that guy that they call the best in the league,” Lawler said. “I just want to be able to get up there and show that this season. I feel like I could’ve done this in Seattle, but I have more opportunities here and I believe I can be that breakout guy for Winnipeg.