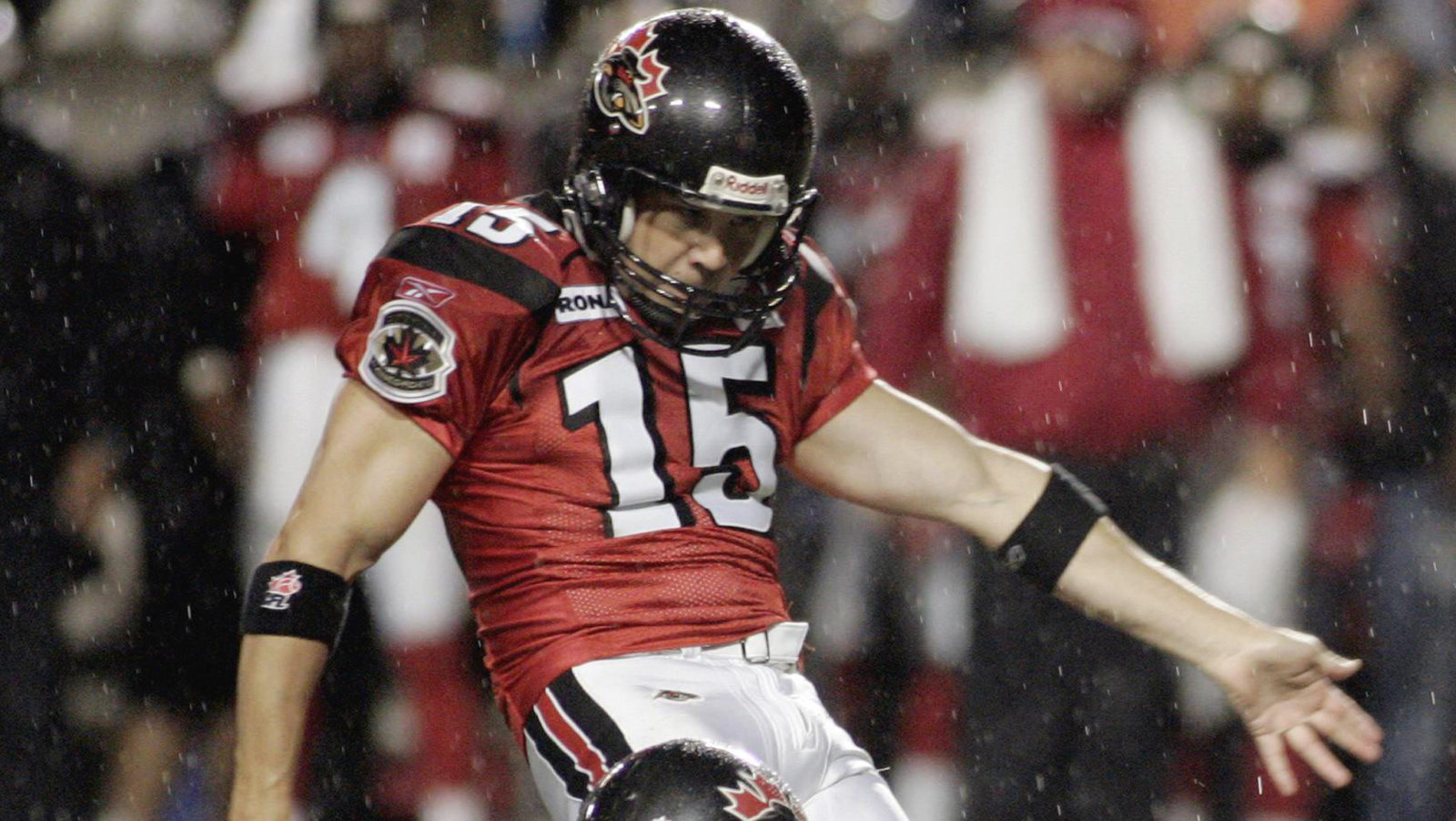 The celebration at Frank Clair Stadium was underway. Kerry Joseph, with a look of disbelief on his face, took a knee momentarily, while the rest of the Ottawa Renegades jumped up and down, hugging each other.

It was Canada Day, 2005 in Ottawa and while the clock was ticking on the Renegades’ logo — the club would suspend operations in April, 2006 — they were able to put their stamp on one of the greatest comebacks and most entertaining finishes in CFL history.

“This game, for all intents and purposes, looked over after three,” TSN’s Rod Black gleefully said as the celebration unfolded. “It’s never over in the CFL!”

Amidst all of the celebrating, stood the man that put the final points on the board. Kicker Matt Kellett coolly walked around the field, slapping fives with his teammates, his game-winning 14-yard field goal still fresh off of his foot.

Here is my #tbt pic for this week. Not that old, but this one of my fav things to do post game, holding my first born. Playing with the #Ottawa #renegades

There was a smile on Kellet’s face as the ball went through, a high-five with the holder and…that was kind of it. The reaction didn’t match the achievement that day, as Kellet put the finishing touches on the Renegades digging out of a 23-point fourth-quarter hole. The kicker from Regina made all four of his field goal attempts, including a pair in overtime, while Montreal kicker Damon Duval was wide on one of his two attempts in the extra frame.

It was redemption for Kellet on a number of fronts. The win came against Montreal, the team that traded him away after spending the previous two seasons there.

In a 2014 interview, Kellet told Defend the R that the win against the Als stood out the most to him from his time in Ottawa.

“I went 4 for 4 with the game-tying and game-winning (field goal) in overtime,” he said.

“The coaches were under such an amazing amount (of) stress from the ownership, but they stayed true to themselves and their team. Coach (Joe) Paopao and his staff should be very proud of how they conducted themselves and coached our team that year.”

Kellet may not have known it at the time, but the 2005 season would be his last in the CFL. Stepping up for the Renegades that day brought the team its first win of the season and just one of seven it would get all year. It also gave him a moment to be the hero when earlier in his career, he said he struggled with the mental side of the game.

In that same interview with Defend the R, Kellet said that BC Place was the toughest stadium for him in his career. He started with the Lions in 1998 and returned to play in BC in 2001 and 2002. With the Lions in 2002, he once missed five field goal attempts in a game against the Argos. It’s the kind of thing that dooms some kickers’ careers. Kellet persevered and put together an eight-year CFL stay.

As the Renegades mounted their comeback that Canada Day 15 years ago now, you frequently hear Rod Black mention Kellet’s vision problems. It was a factor in the Als’ trading him away. You see Kellet on the field, wearing his prescription glasses; a rarity in a professional, contact sport like football.

“I have no hard feelings against those guys,” Kellet told The Canadian Press after the game. “They treated me very well, (but) I might look back on it and smile in a few hours.”

That game was laced with legendary figures and personalities that would dominate the first decade into a new century. In the bigger picture, Kellet is a smaller piece of the puzzle, but on that night he was the integral piece in a win. The Renegades’ days were numbered and the franchise never saw the success on or off the field that fans would hope for but Kellet deservedly got his night in the nation’s capital on its birthday.

Hopefully on this Canada Day he takes some time from his home in Calgary to look back on that game and smiles, too.