Worthy: ‘I’ve been through the fire and know what it takes to be great’ 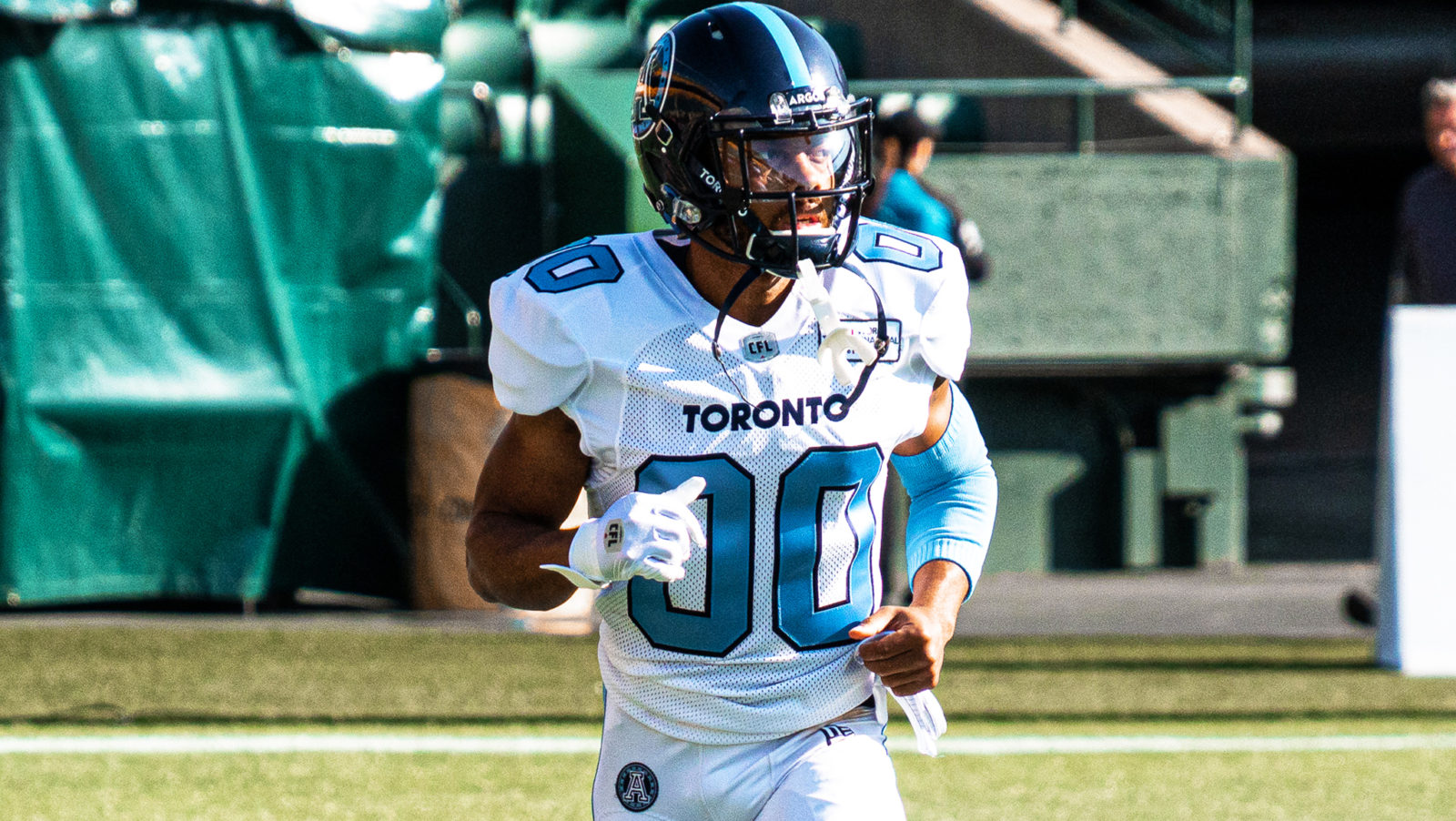 Worthy: ‘I’ve been through the fire and know what it takes to be great’

Just a few years ago, Chandler Worthy was wondering if he should quit football altogether.

Worthy had signed a futures contract with the New York Jets in 2016. He had previously played for the Houston Texans, making it into three games for them. One of his coaches from Troy University was with the Jets, so he guessed that he’d have a solid shot at showcasing his abilities, however, he was a part of the last round of cuts, leaving him without a football home.

“It was kind of a slap in the face, because I’d left a really good situation to come to them,” Worthy said. “I didn’t even get an opportunity to show what I could do because they weren’t putting me in preseason games. I felt like I knew where my career and my life was going in football and I felt like I was one of the best and heading in the direction, and when I got cut, it kind of sent me back to the bottom.

“I had worked my entire life for that moment, and it was snatched away by something that was out of my control. That was the hardest part for me. The realization that my dream could’ve just ended from something that was out of my control after I had put so much work in to get there. That was really hard for me to deal with and took me to a place that I had to overcome.”

RELATED
» CFL, Dr. Oetker launch Season 5 of Best in the League
» Best of the Best: CFL players weigh in on the league’s best pivot
» O’Leary: Five quarterbacks that could make great coaches 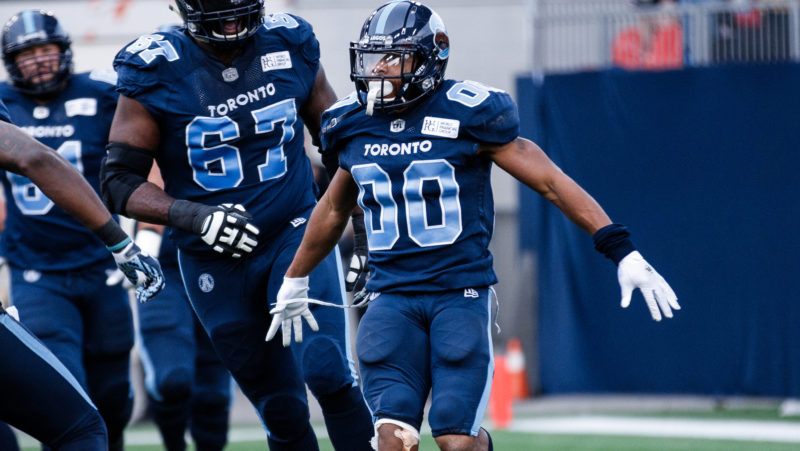 Toronto Argonauts receiver Chandler Worthy celebrates a touchdown against the Ottawa REDBLACKS with his teammates. (Argonauts.ca)

The 26-year-old took the entire season off in 2016. He had gone through a similar situation before heading to college. He had offers from several schools, including Oklahoma State, but after tearing his hamstring during a high-school track meet, those offers were pulled. Now, after going through the ringer once again to start his pro career, he was left to contemplate what was next.

“I just felt like giving up. I just didn’t understand why. Out of all the people, I worked so hard,” Worthy said. “When those emotions ran their course, it dawned on me that I still loved doing this and I still felt like I’m great at (football) and I’m one of the best athletes. So I said to myself, ‘I can’t quit on this.'”

That season off helped re-shape Worthy’s perspective on his career. Up to that point, professional football had turned into a job for him, rather than a passion. In the off-season, opportunity came knocking north of the border, as the Toronto Argonauts and Worthy agreed to a contract in February 2017.

In his first season in Toronto, the team did well, as they turned a 9-9 regular season into a run all the way to the 105th Grey Cup presented by Shaw, and the Argos’ 17th championship in franchise history. But while he was able to celebrate being a part of a championship team, Worthy said that season was the hardest of his career.

He had injured his ankle during an off-season workout before coming into training camp. He tried everything in his power to work through the pain.

“At that point in my life, I was coming off a year away, and I said that I can’t not do this because I don’t know if football would come back again for me,” Worthy said.

In the third game of the season against Ottawa, he fractured his ankle and was lost long-term. He made it into one more game that year, but that was it.

“It was good being on a winning team and being with my teammates and being a part of something so special,” Worthy said. “But it was hard after going through so much already and then dealing with an injury and not being able to be out there to help my teammates.”

For the majority of 2018 and 2019, Worthy continued to grind on the team’s practice roster to get an opportunity to play every game. Ahead of the 2019 season, he opted to make a switch, going from No. 80 to 00.

The number is an oddity in sports in general but especially in the game of football. Two individuals wore 00 in the NFL: center Jim Otto and receiver Ken Burrough. The use of 0 and 00 was banned back in 1973. But those numbers are allowed to be worn in the CFL, and there are no restrictions on which numbers a certain position could wear, so Worthy made the change.

“I just wanted to have a new identity and feel different when I was out there,” Worthy said. “00 was open, and in my eyes, I had been torn down so much. Going into training, I just told myself for better or for worse, it could be my last season ever playing, I’m going to go out and give it my all. I couldn’t be hiding my ego and be afraid to be myself and holding back. My identity came from my number and going out there and being myself for the love of the game.

“(Last year) was an all-or-nothing season for me because it could’ve been the last one.”

Worthy demanded the attention of coach Corey Chamblin and his staff with his strong showings in practice during the 2019 season, and his efforts were rewarded. He was slotted into the lineup for the team’s Week 7 game against Edmonton. He finished that game with one catch for 15 yards. His big chance came at the tail end of the season, when he was included in the Week 19 contest against the Montreal Alouettes.

Worthy was outstanding in that contest, reeling in nine passes for 93 yards. His night was highlighted by a 32-yard diving catch that landed him just a yard short of getting into the end zone. He was still able to find pay dirt in that contest, nabbing his first professional touchdown in the process.  A week later, he scored another touchdown in front of his home faithful against the Ottawa REDBLACKS.

Worthy was able to finish the year with 12 receptions for 129 yards and a pair of scores in 2019.

Toronto fully threw their support behind Worthy this off-season, as the two sides agreed to a three-year contract extension which will see the receiver stay in Double Blue through 2022.

“Getting that deal done showed that Toronto believed in me and saw something in me, so I’m very thankful for that,” Worthy said. “I didn’t take that lightly because I’ve just scratched the surface. I didn’t even fully get to show people what I’m capable of.

“I haven’t even gotten started yet. What I have planned for this year is to do a lot and be the leader that the team needs. We’ve had great leadership, but I think we need a different kind of leadership to get us back to that Grey Cup form.” 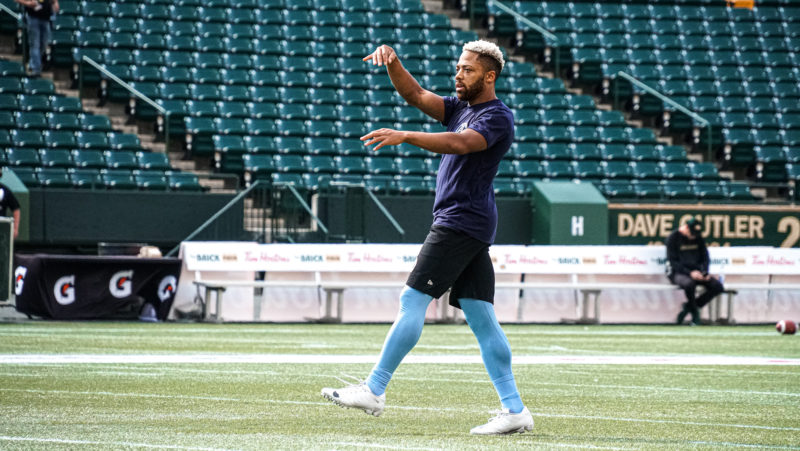 Toronto Argonauts receiver Chandler Worthy warms up before a game at Commonwealth Stadium in Edmonton. (Argonauts.ca)

Heading into a possible 2020 season, Worthy is one of the most intriguing pieces in the Argonauts’ new-look offence. He showed out to end last year, and he has the ability to be something special for the Boatmen.

The Argos’ offence will have a massively different outlook in 2020. Ryan Dinwiddie will be calling the shots as both the team’s head coach and offensive coordinator. Matt Nichols and McLeod Bethel-Thompson arguably the league’s best quarterback tandem. Additionally, the team has completely overhauled their receivers room, with DaVaris Daniels, Juwan Brescacin, Natey Adjei and Dejon Brissett joining the fold this year.

Worthy has big goals for himself over the next few years. The obvious one being to win a second Grey Cup championship. He also has his eyes set on becoming the MOP down the road. But he’s also able to look back and see just how far he’s come in a few short years.

“I’m always thankful when I think about the direction my life is playing out and the way that it’s going,” Worthy said. “When I just sit back and think about how life can suddenly change on a dime and change your direction, it gave me faith to believe that if you have something you love to do, just keep working towards it and the tide will eventually change.

“Life is always going to beat you up and give you some seasoning to prepare you for something that you can’t even see yet. All that stuff that I went to just turned me into a greater player and kept sharpening me so that when I go out there, I’ve been through the fire and know what it takes to be great. I know what it takes to keep pushing yourself and it’s helped me become a better leader in not only football but in life. Reflecting brings me so much and I’m just so thankful to be where I am today.”