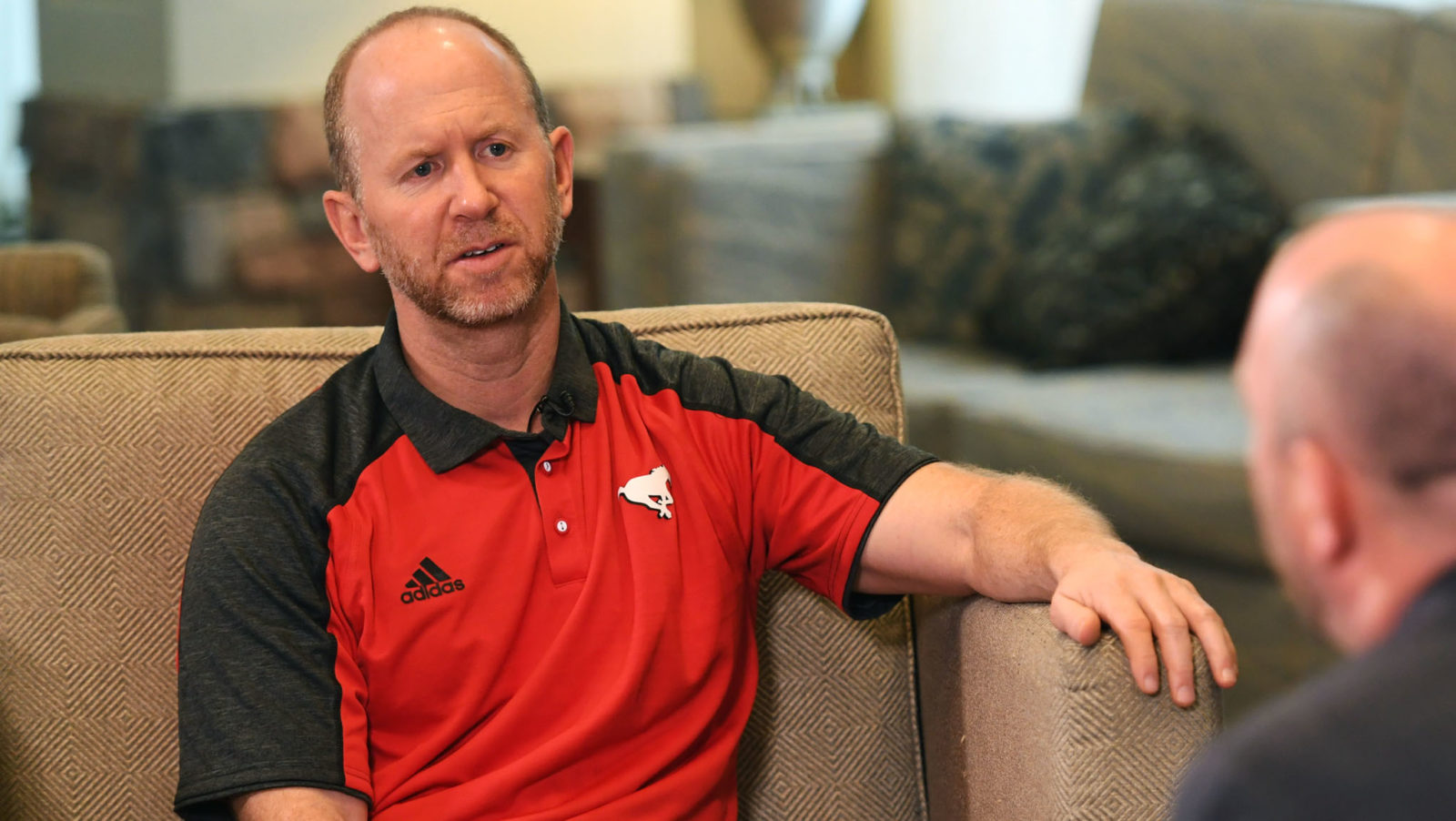 TORONTO — As Grey Cup Unite Week continues, all nine head coaches from across the CFL came together to address the media on Wednesday.

The coaches were separated into three groups spread out over the afternoon. The first group was Edmonton head coach Scott Milanovich, Hamilton’s bench boss Orlondo Steinauer and Winnipeg’s leader Mike O’Shea. That trio was followed by the Dickenson brothers, Dave and Craig, and BC’s Rick Campbell. The final grouping of head coaches was Montreal’s Khari Jones, Ottawa’s Paul LaPolice and Toronto’s Ryan Dinwiddie.

There were many topics covered, from what the coaches have been up to during this extended off-season to how they’re preparing for the 2021 season and how it feels seeing former CFL players succeeding in the NFL.

Here are some of the best statements from all nine coaches.

“Well, let me just first (start) by saying the week was pretty damn good until the game. The week was pretty good. It’s just different. I don’t even know how to feel. That’s the most honest answer I can give. I’ve accepted that it is what it is. It’s something I’ve never been a part of, never envisioned it like this. Emotions are like a roller coaster. They’re high and low. But again, move past it and I echo what O’Sh (Mike O’Shea) said, I can’t really say it any better and that simply is that it seems like a long time ago, so long ago. So much has transpired in between that it’s in the rearview mirror right now.”

“You want to say no, you don’t. That you give everything you have for every single game you play, but I’m not sure that’s true. Your closer friends and guys that you may hate, guys you may love, you may have a little extra focus because you’re gonna hear about it. I remember we played Toronto in the East Final. I probably never worked harder in my life on a game plan I did on that one because I can only imagine what Jim Barker would be saying that they beat us and gone to the Grey Cup that year. I mean, now it’s harder because I know pretty much every head coach in the league personally.”

– Milanovich on playing better against coaches he knows

“As hard as it’s been to not be playing this year, for a guy like myself, that has been out of it for three years, it’s given me an opportunity. I’ll give you a for instance. I got the job in December but I was still working in Jacksonville. Our season was done middle of January, I think. Then I had to get coaches hired the first two weeks. It’s such a rush, that first year getting your staff put together, picking an offence you want, picking a defence you want, a special teams you want, getting scripted for training camp, getting schedules done. What this has given me an opportunity to do is really do a better job, more in-depth research on O’Shea’s team and Orlondo’s team, Dave Dickinson’s team and I can tell you I am much more familiar with the CFL sitting here today than I was eight months ago.” 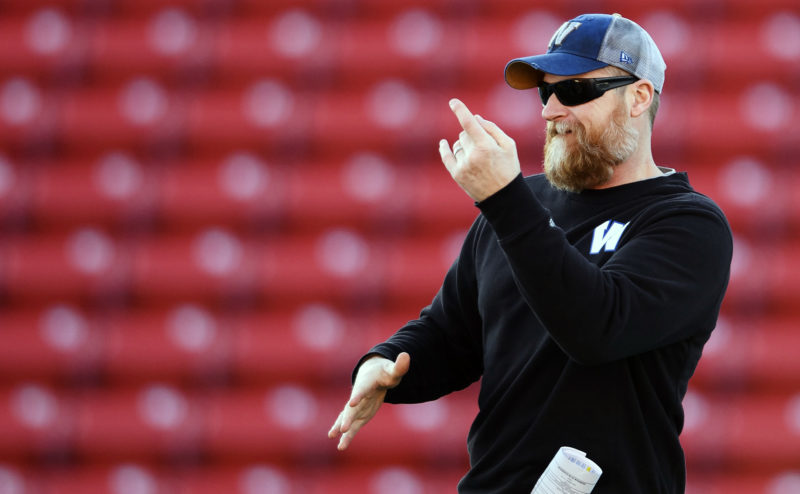 “There hasn’t been a lot of communication since late summer, early fall. The assistant coaches have kept in some contact with them but (the players) understand how much we care about them and they also know that the door is always open. I know that they’re not physically in the building anymore but here and there, there are calls with certain guys as things come up and as people just check in on each other.”

“I think the chances are very good. I mean, that’s what we’re all hoping for and working towards. It’s full steam ahead for our staff. I know that and I can’t speak for the other coaches but I would imagine everybody feels the same way. We know we suffered through this last summer of not coaching football and if it’s tough, painful for all of us, and I think all of us are going to have the mindset that we’re going to play in 2021 hell or high water, we’re gonna find a way to do it. So I think it’s gonna happen.”

“We have talked about our team and who we’d like to have back, what their contracts are, what we expect possibly the contracts to look like next year. The reality is we won’t be able to bring everybody back but we’re going to try and bring our core team back, which I think we can. As far as Cody…that’s Jeremy’s (O’Day) sort of work. He’s certainly a guy that is our franchise quarterback and really a leader on our offence. We’re going to try to make sure we have him signed up for the long-term. Jeremy and I haven’t gotten into specifics on Cody yet but this is obviously the last year of his deal coming up. We’ll certainly want to try to address that.”

“The pause and what’s going on, as far as obviously not playing the season, has given us a chance to catch our breath and keep going. It’s been a unique situation here, to say the least. I will say I’m very optimistic where we are in the process. We’re not on pause and we’re in the process of solidifying our football ops, our coaching staff, which I think that will happen sooner than later when you’ll hear that news publicly. We want to keep as many people as we can around here, coaches and football ops. We liked a lot of the players we signed in the off-season and the veteran guys that were here, so we’ve gone through all those meetings as well. I’ve done that with (Director of Football Operations) Neil McEvoy. We definitely have a game plan and we’re going to work hard to execute it.”

– Campbell on the future of the Lions’ front office and roster

“I think we’re all excited for him especially because you know, it didn’t really go well for him right away. He got released. He was really close to coming back to Calgary and then Philly decided to sweeten the offer a little bit. I think for the most part, all of us just enjoy seeing these guys get an opportunity. We all believe in them and sometimes it works out, sometimes it doesn’t but he’s playing well. You know, 15 tackles. I mean, that’s a huge number. I don’t know how many guys get that across the league.” 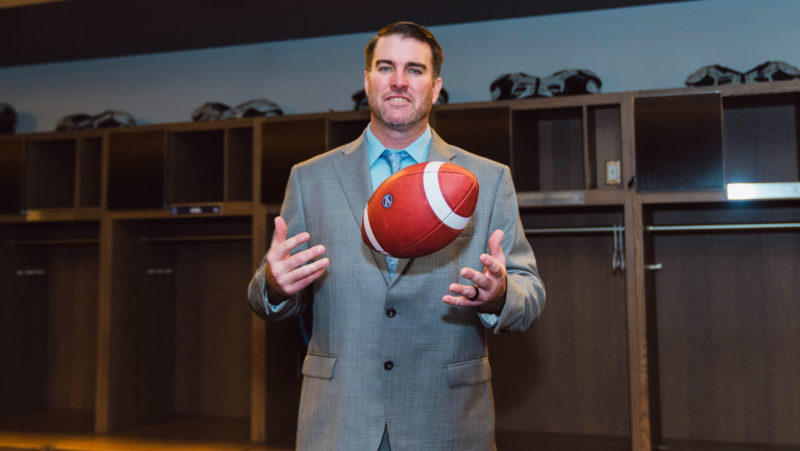 It’s been an unusual year for everyone, including Ryan Dinwiddie, whose first year as a head coach did not see him on the sidelines (Argonauts.ca)

“Well, it was a lot of learning and not a lot of playing, which is kind of the tough part about it. Obviously disappointed going into your first year and things we did in free agency and with the draft, I felt really comfortable about the direction our program is going. We knew we weren’t there yet. We have to improve our roster and those things, but I felt like we were a better team going in this season than they had in the past. It’s just a bump in the road. It’s frustrating. It was demoralizing, at times, that you’re not able to do those things with your staff and your players. It’s just part of life, man. It’s just like the rest of the world is dealing with a lot harder (things) than we are. I mean, we still have our jobs and we’re looking to play next year. So big picture, it gave me the opportunity to look into the job in a different aspect and not be rushed.”

“That’s always an issue, especially after this year, with being off for a year. I think we’re kind of in the same boat, as Paul (LaPolice), talking to the players, a big majority of them want to continue playing. Of course, there are some that are close to the end of their careers and maybe think about starting and wanting to go on and move forward. I understand that, that’s fine, I’ve been there. Me and Danny (Maciocia) are talking quite a bit and just trying to make sure that we focus on the the guys that we want to see next year and make a plan to hopefully keep them. From most of the guys that we’ve talked to they do seem eager to come back and get back out on the football field.”

“We’ve tried to do some stuff, even remotely to keep talking, to make sure our units talk to each other, our coaches talks, the linebackers coach talking to those linebackers. Put some stuff for those guys to create that but you don’t want to overdo that. You don’t want to force too much of it. Certainly since we stopped playing football, you want your players to go and not worry about football, go worry about getting jobs for their families. Once that happened, we just kind of tailed off. I’m sure we’ll jump back into that starting in January, February trying to get them.”