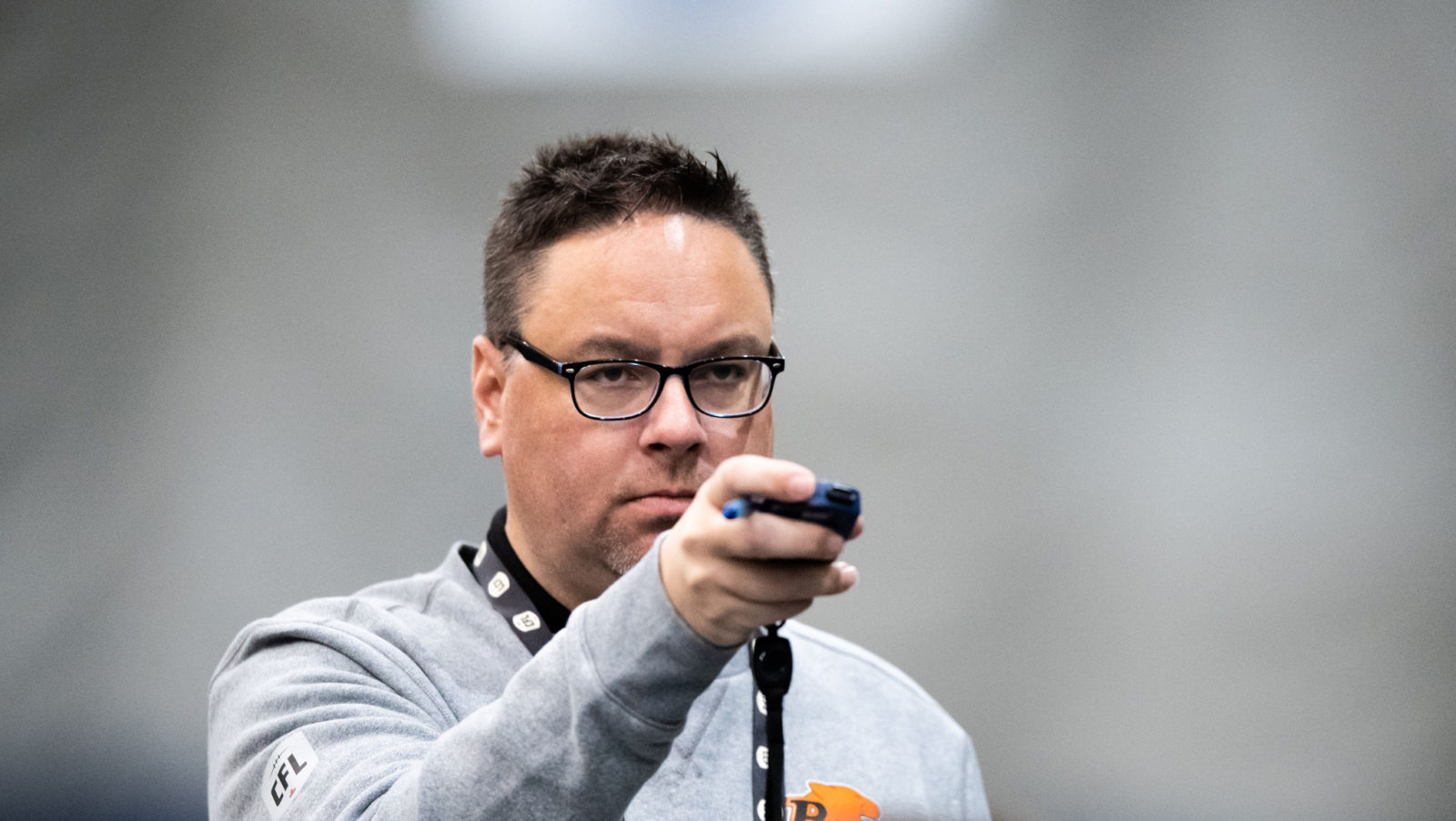 In November of 1995, a marketing student from Kwantlen University College in Surrey walked into the BC Lions offices and saw an empty reception desk.

Some will call it a coincidence, some will call it fate. Some might have seen the empty desk and waited, or just shrugged and walked out the still-open door, on to the next idea.

Neil McEvoy saw it as an opportunity. He bypassed the empty desk and found the Lions’ ticket sales director at the time and convinced them to let him use the Lions as part of a project for a class. A few months later, he was hired into the ticket sales department.

“Those were tough years selling tickets. You think it’s tough now, go back to then,” McEvoy told Vancouver’s TSN 1040 earlier this week, after he’d been named co-general manager of the Lions

“It wasn’t easy to sell everyone dressing up as blue seats. It was a tough time but it was my foot in the door.”

That foot in the door set in motion a 25-year journey that would see McEvoy wear a number of different hats for the club that he grew up watching, before he and Lions head coach Rick Campbell were named as co-GMs on Dec. 7. He’s gone from ticket sales to a community relations job, then a media relations role in 1997 and then made the move into football operations in 1999. From there, he started his climb up the ladder through the organization. 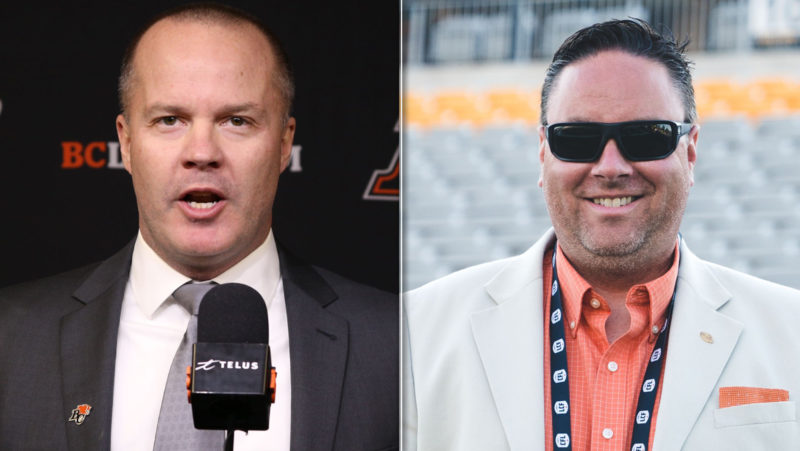 Rick Campbell and Neil McEvoy will share GM duties as the Lions move ahead with their prep for the 2021 CFL season (Photo: BCLions.com)

The son of former Winnipeg Blue Bomber Clayton McEvoy (a fullback with the team from 1970 to 1975) and a junior football player himself, Neil came to the Lions with a rich football background and arrived at a time when computer literacy was a plus and something that would become increasingly vital each season.

“I wasn’t hired for my computer skills, that was just something that I brought on,” he said. “I put myself in a position to give myself an opportunity, just that they always needed me.”

As his playing days wound down, he remembers sitting in the stands at Lions and Canucks games and looking up to the press boxes and seeing the GMs. Wanting to stay involved with football, he saw the best way to stay in the game and set himself the lofty goal of one day running a team.

“There are some aspects of going to a professional sporting event that you don’t get on TV,” he said.

“When you look around at the pageantry not only on the field but outside of the realm of where the game is played, there are a lot of things going on. That’s what drew me to going to professional sporting events.

“I just felt for myself, I’m not going to be a player…so I thought maybe if I can concentrate on the management side and just getting my foot in the door it might be able to lead to that.”

He remembers being at a staff Christmas party in the late ’90s and joking with his co-workers about being the assistant GM.

“I remember our president Glen Ringdal laughing because he heard me say it and seeing it as a joke. But he said, ‘You’re not there yet.’ It’s something that I’ve always dreamed of getting to and I’m excited about the opportunity now.”

McEvoy has had plenty of mentors over the last 25 years. He’s worked with Adam Rita, Wally Buono and Ed Hervey and learned from each of them along the way. He’s built up connections around the league and while waiting for the time to be right with the Lions, turned down opportunities elsewhere, wanting to stay in Vancouver.

Hervey’s departure from the organization in October was sudden, but the door had suddenly opened for what’s still a somewhat unconventional setup, with Campbell adding co-GM to his head coaching and defensive coordinator duties and McEvoy taking the other half of the GM role with the title of director of football operations.

Both sides are confident that the arrangement can work.

“We both have a love of the CFL,” Campbell said to Global Vancouver.

“I also think it’s really important to have people around that are local and get what it’s like to be a BC Lion and have been through different things and different regimes.”

McEvoy pointed out that even the GMs that work in the CFL as a solo entity don’t actually do the work by themselves. There’s a team of assistants, scouts and coaches to consult in the process of building a team. The pieces that remained in the wake of Hervey’s departure continued their work, while adding former longtime Lion Ryan Rigmaiden as the director of U.S. scouting. With titles shored up, they’ll continue to work and move forward for the 2021 season.

“You need to put good people around you,” McEvoy said.

“Professional sports is a complex world and three-down football at the pro level is no different. It takes a group of individuals working together to make this all work. We’ve put our egos aside and we’re just going to work together and make this work. I can’t see any stumbling with this, to be quite honest.”

“Professional sports is a complex world and three-down football at the pro level is no different. It takes a group of individuals working together to make this all work.”

— BC Lions co-GM and director of football operations Neil McEvoy on sharing the role with Rick Campbell.

Before McEvoy agreed to take the promotion with the Lions, he considered other teams that have done similar things. He looked down the road and across the border to the Seattle Seahawks, where GM John Schneider works closely with head coach Pete Carroll and considered the success they’ve had. He also thought of the Hamilton Tiger-Cats, who had a history-making 2019 season under the guidance of Drew Allemang and Shawn Burke working as co-managers of football operations.

“He gave a bunch of ideas that I brought to the table to Rick Campbell and Rick LeLacheur. They’ve obviously done a really good job over there. If we can copy that and be in the Grey Cup every two years, we’re certainly doing something right.”

McEvoy and Burke know each other well, having started similar climbs through their respective organizations around the same time. There’s something special about the employee that gets into a company at an entry-level job and climbs with a big goal in mind.

There’s a unique understanding of what the team is about, what works in the community and what doesn’t. Those people are a shining example to the rest of the staff, to every young person that might make grandiose jokes about their roles at staff Christmas parties.

“When I first started, the two guys that I really looked up to in the organization that were with the club a long time were our trainer, Bill Reichelt and our equipment guy, Ken Kasuya,” he said.

“Those individuals, I just thought, ‘God one day it’d be great to be like them, lifetime employees with the club.’

“They had an allure to them when they walked into the room because everyone knew who they were. They were a gold standard for the BC Lions. I thought to myself back then that it’d be nice to be looked at (as) a guy who…when you think of the BC Lions, you think of him. That’s the sort of position I was hoping to put myself into.”