Landry: McCarty channels love for football into his future 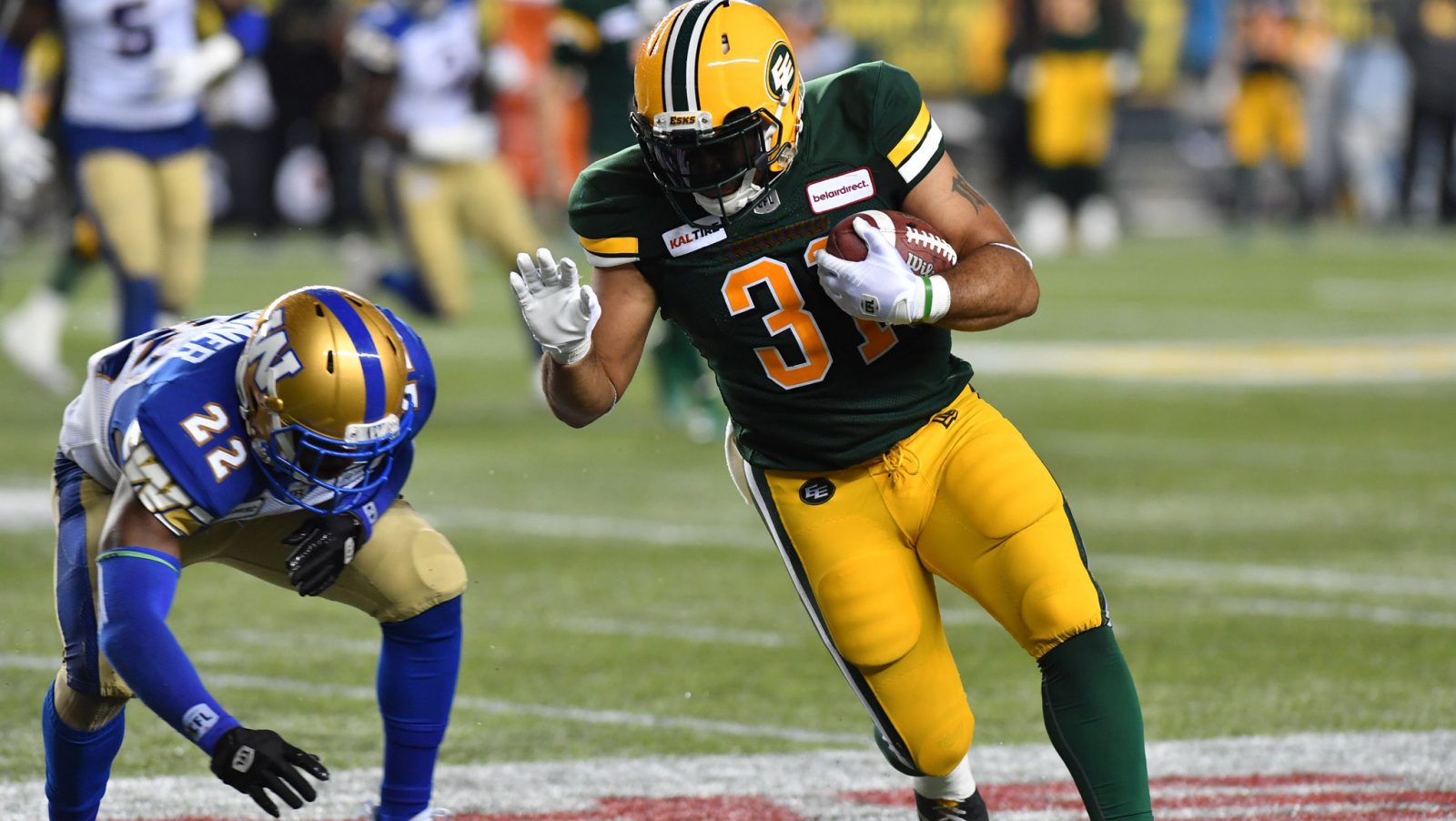 Landry: McCarty channels love for football into his future

How will Calvin McCarty take on life after playing pro football? The same way he took on life as a player, it turns out.

McCarty may have earned the right to kick back after nearly a decade and a half in the battles of the great northern league, but he is not sleeping on the future.

Coaching, managing, maybe even broadcasting. The 36-year-old is ready to take on anything, so long as it keeps him tethered to the game he has loved so much for 30 years, 13 of those years given in service to the Edmonton Football Team.

“I’ve been involved since I was six-years-old and this is something that I’m passionate about,” McCarty says, confirming that his plans are to stay as close to the game as he can.

That passion was always pretty clearly evident with McCarty whenever he donned the Green and Gold, in a career that saw him win a Grey Cup in 2015. Whether bulldozing through a hole for critical rushing yards, sealing an opening for a fellow back, diffusing the threat of a blitzing opponent, making highlight reel one-handed grabs out of the backfield, or doing the heavy lifting of a special-teamer, McCarty gave his all for football. 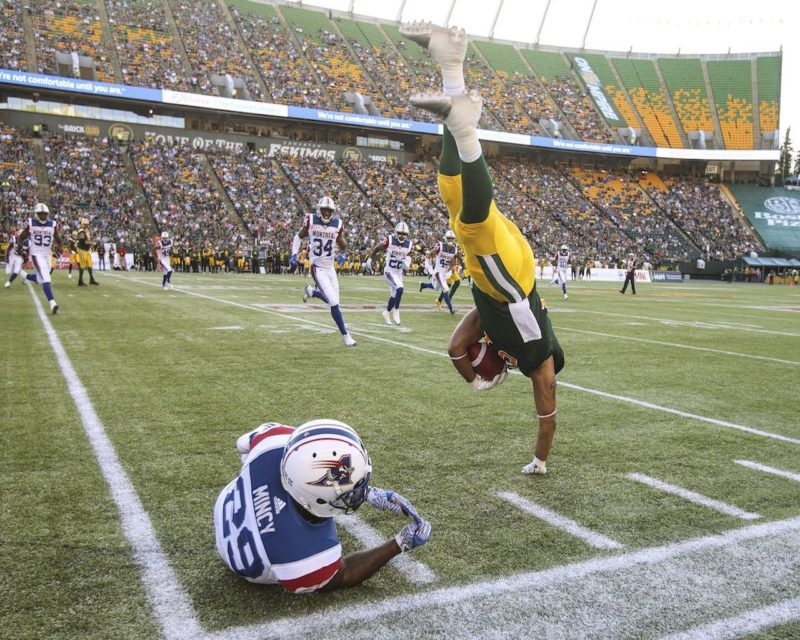 Through 13 seasons in Edmonton, McCarty never shied away from putting his body on the line to make plays for his team (THE CANADIAN PRESS/Jason Franson)

“There’s a couple opportunities out there,” says the man who has adopted Edmonton as his permanent home.

Right now, McCarty is enjoying a lifestyle that has been foreign to him for so many years. With the announcement of his retirement as a player earlier this month, he’s finally gotten to exhale, earning a mental break from the dogged demands that the sport continually made of him and those that he made of himself.

If you always knew that McCarty was tenacious on the field, know that he was just as disciplined off it. And that extended to his life beyond the weight room and the film room, by the way.

He laughs as he describes his off-season player’s life, one where he would take absolutely zero chances that he might get injured in any kind of accident. He wants to snowboard, but hasn’t yet. That will come, but while he was playing, he wasn’t about to risk a broken limb or blown out knee, or anything that could have put a coming football campaign at risk.

On beach vacations, McCarty says, he couldn’t bear the thought of a freak accident derailing his career.

Point is, McCarty felt the presence of his football-playing life at all times, and he respected it, 365 days a year. “It’s always in the back of your mind,” he says.

Now, he’s gotten his first chance to really unwind, which will mean quality recreational time with his wife, Marissa, and eight-year-old daughter Anya-Cruz.

“It’s relaxing,” McCarty says, “not having to look over your shoulder and be able to enjoy the moment and be where your feet are at.”

Where are those feet these days? And where are they going?

“Obviously I’d like to stay here,” he says, of Edmonton. “But, man, I understand what the job entails and the lifestyle that comes with it,” he says of a football life. “So you got to be ready to move at anytime.”

Soon, you’ll find McCarty at Bellerose Composite High School, in St. Albert, a city of 66,000 cozied up to the northwest boundary of Edmonton. He’d previously done some work with students there and beginning in early April he’ll take on the role of educational assistant, instructing student athletes on fitness. More than that, he’ll also be coaching the offensive line and running backs at Bellerose.

“If I’m leaving the game (as a player), I feel like I should be potentially helping,” says McCarty. “Somehow, or some way.”

“Coaching is, I think something that I possibly want to do,” adds McCarty, reiterating his desire to keep football in his professional life. “Coaching or management side, I think.”

He throws a little something else in there, too. Maybe some broadcast work.

“I might potentially be in the booth and talk and break down the game,” he suggests. “I’m no Tony Romo but I bring a different angle because I feel like I’ve played so many different positions. I understand the game, you know? Not just the special teams aspect.”

The coaching gene — and the analyst’s gene — seem evident in McCarty, with even a quick glance at his Twitter feed. He posts videos of himself in action, highlights that he’s proud of and ones that allow him to teach some basics while backing up the lessons with visuals. 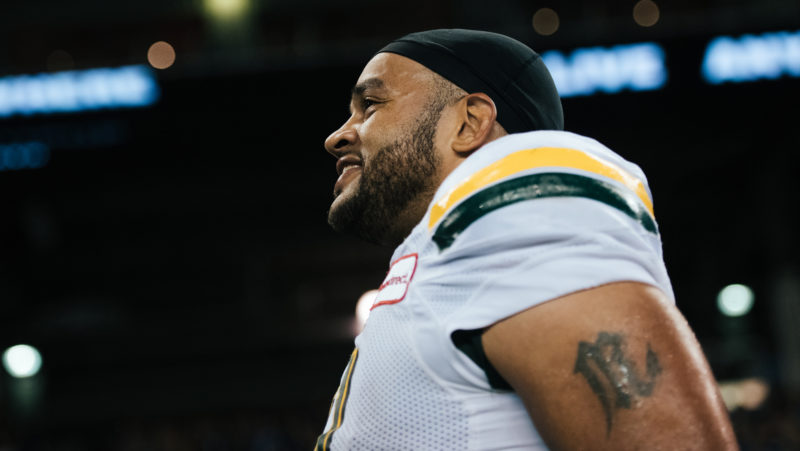 McCarty will look to refocus his love for football into his post-playing days, aiming to grow the sport and making his community a better place at the same time (Johany Jutras/CFL.ca)

He’s also been active in assisting young, scholarship-chasing football players in getting noticed, encouraging them to engage in their own social media streams with highlights of their own. “If I’m telling somebody to do that, I feel like I need to put that into action, too,” he says.

Helping young football players seems a natural fit for McCarty, who has branches and branches of athletes in his family tree. His father played Division II basketball in the States. His mother was a Division II softball and volleyball player. His daughter, he says, knocked the first pitch he threw to her over the backyard fence. “My sister played Kansas basketball and softball,” he says. “My brother’s a quarterback.” Then, he pauses, before dropping this nugget, chuckling: “My grandma was a snooker player.”

McCarty gleaned lessons from his parents and applied them in his own way, to his own chosen sport. “Football was kind of my way to take what they were telling me and to kind of grow my own garden, you know?”

Now he looks forward to continuing the chain as a way to “give back to those who gave to me.”

A pretty good garden, you’d have to say. The bumper crop? A level head, with the distinct knowledge that football is life, while you’re playing it, certainly. But if you’re Calvin McCarty, you keep that in perspective while you appreciate your loved ones and the place you live.

“At the end of the day, the biggest team sport is your community, your family,” he says.

One of the things you could say about McCarty as a player was that he was assignment-sound. Seems he’s still got that in order as he turns up field in the first steps of his retirement.

EDMONTON: HOW DOES HE LOVE THEE?

Born in Muskogee, Oklahoma, McCarty came to Edmonton by way of Surrey, British Columbia, where he’d moved when he was 11-years-old.

While playing high school football, he first noticed a certain something in people from Edmonton, in some of the young players he battled against in occasional inter-provincial clashes. A certain something that evoked memories of Muskogee.

When he got to Edmonton as a rookie in 2007, that Edmonton toughness was driven home, as McCarty marvelled at how well people matter-of-factly dealt with the frigid winters. Along with that, he says, he quickly came to understand the lofty sports history and the expectations that have always followed.

“There’s a lot of alumni here that buy in, that you see. Police officers, teachers, principals. High school fields that have ended up being named after players.”

For McCarty, there is gratitude for what the city, its people and its team have given him and what they are. “I understand it and I want to do my best to pass that on as well,” he says.

“It’s about giving back and making it better than how you found it, man.”