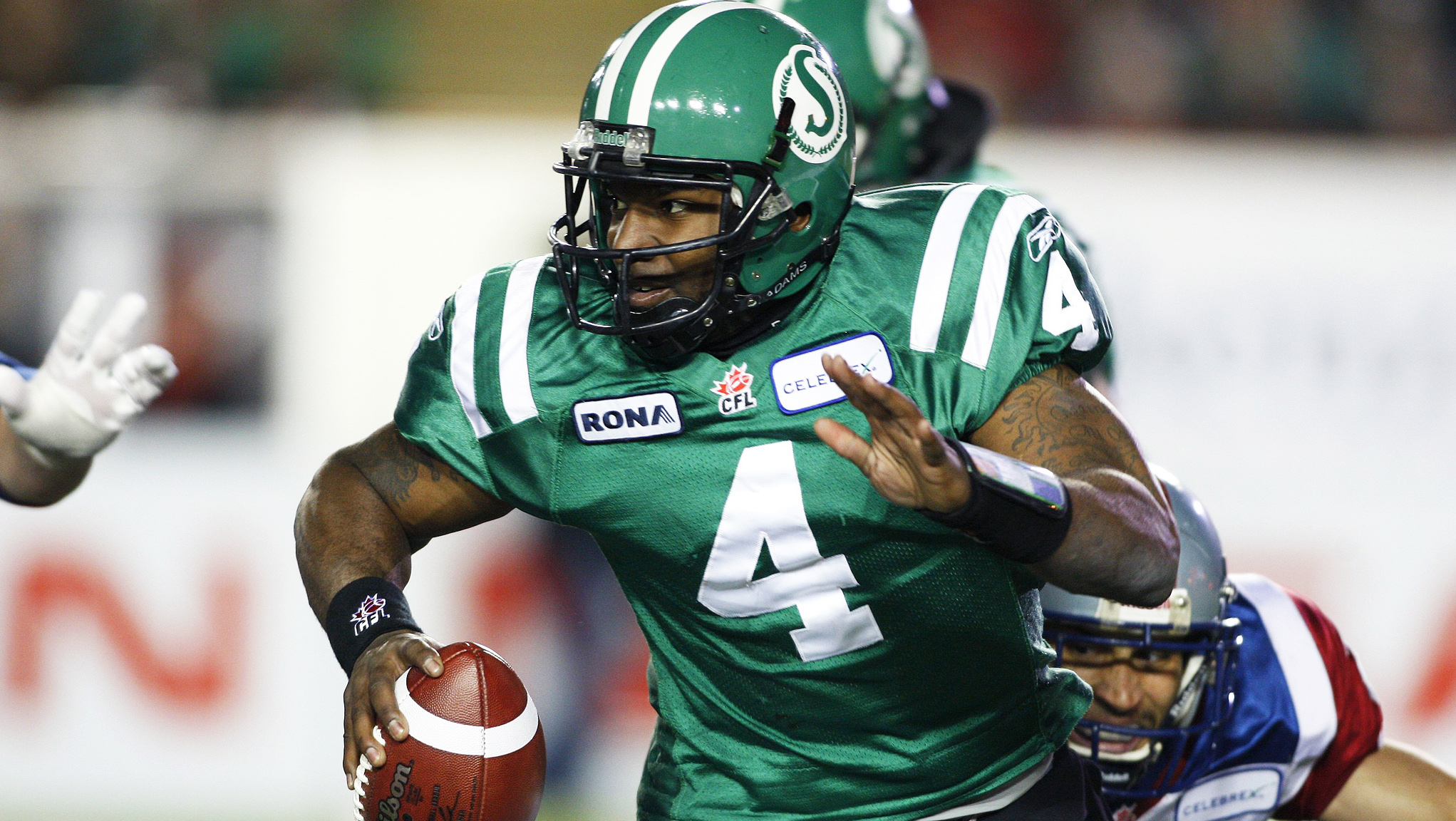 Now, you can see it again, through the Grey Cup On Demand Portal, powered by Mark’s. And this time, you can watch it knowing the thoughts of someone who was central to the infamous moment, though he was not a player with either the Montreal Alouettes nor the Saskatchewan Roughriders. Not a coach either.

Glen Johnson was the referee for the 97th Grey Cup Game, and the man who announced for all to hear that the Roughriders had not, indeed, won the game on a missed Montreal field goal, with no time remaining on the clock.

Instead, they’d been flagged for having too many men on the field when Montreal placekicker Damon Duval missed on a 43-yard attempt, the Als trailing the Riders by a score of 27-25.

The penalty gave Duval a second crack at the uprights, only this time, from ten yards closer. And Duval, provided with a mulligan, was up to the task from 33-yards, giving the Alouettes a stunning, come from behind, 28-27 victory in a corker of a championship game.

It is one of the most famous finishes in the history of the Grey Cup.

That moment in time, for Johnson, is very, very clear, and his memories of it are vivid. He has a perspective – both figuratively and literally – that is quite unlike anyone else’s.

“I see the ball going and then, poof, I see the three flags come up,” says Johnson, remembering the missed field goal that had all of Saskatchewan celebrating what was surely a ‘hang on for dear life’ victory, and the Roughriders’ second Grey Cup in three seasons.

Johnson’s task as referee was clear one, on that play, or any other field goal, for that matter.

Standing in the backfield, he surveyed the scene along the line of scrimmage as the ball was snapped, looking for any infractions there. Seeing none, he then fixed his eyes on Duval, to see if any defender upset the kicker with illegal contact. Again, seeing clean play, he was then able to look up to catch the flight of the ball, as it sailed wide to the right and into the end zone.

Three flags flew skyward. Not one, and not two. Three. “Penalty markers down all over the field!” exclaimed Chris Cuthbert on the TSN broadcast.

“I know in that moment,” says Johnson, returning in time to that night in Calgary.

What he knows is that his crew mates are making a ‘too many men’ call. “That’s the only thing it can be,” he says. “There’s no other reason for those three guys to throw the three flags.”

The Riders started to celebrate, but the troika of hankies told Johnson that those celebrations were premature, and even today he is taken by just how surreal the moment seemed to him. It still seems that way.

“That was the weirdest feeling of the whole thing for me is, is their elation, them coming onto the field. And I know that they didn’t win. It was a really sobering kind of moment.”

There was another feeling, for Johnson, one that surfaced almost immediately. Apprehension, you could say. Or, perhaps, more like determination. He knew that he and his crew had damn well better be right on this, because of the obvious gravity of the situation. Side Judge Tom Vallesi was the first to jog up to him, as the din of the McMahon Stadium crowd, so many of them dressed in Rider green, thundered in their ears.

Vallesi informed him of what he already knew, really. Illegal substitution was the call.

“I said ‘no offense, what do the other guys have?’” remembers Johnson, looking to be absolutely certain. “Three guys have to call that penalty,” he says of the officiating protocols in place. “All three deep officials in the end zone. I was worried we might have only two out of three flags.”

If there is one thing you can be absolutely certain of, it is that game officials do not ever, ever, ever want to be the reason a championship has been decided, so you can be sure that Johnson and his brethren would have preferred that the Roughriders had not lined up with too many men on the field at that critical juncture. Nevertheless, that was what they were faced with.

Johnson knew a mistake here would be an embarrassing one, from which neither he nor his fellow officials would recover.

“In almost every other part of officiating there’s a bit of grey area,” offers Johnson, pointing out that things like pass interference, or holding, for example, are pure judgement calls. “There was no grey area here.”

“This was counting,” he says. “So you’re either right or you’re wrong.”

“I waited for everybody to get there,” recalls Johnson. “And I actually said to the guys ‘this is going to change our careers one way or the other. Let’s take our time. Are you a hundred per cent Sure? Like, you need to be a hundred and ten per cent sure.’ So we did take our time and we just made sure.”

That’s when he walked to his spot, and flicked his microphone on.

It’s a little bit of a shame that the iconic, burned-in-my-mind image from the 2009 Grey Cup is a close-up of Johnson, placing both hands on his head, signalling the infraction as he says “illegal substitution, too many men on the field, Saskatchewan.”

This was a tremendously exciting game, most of the way through. Saskatchewan’s defence dominated large chunks of it, helping to stake the team to a 17-3 lead at halftime.

There was defensive lineman Keith Shologan’s fumble recovery in the first quarter, setting the Riders up for an Andy Fantuz touchdown reception.

There was a sensational, bruising punt return by Montreal’s Brian Bratton in the third quarter.

Then, two Alouette touchdown drives, capped by an Avon Cobourne rush and a Ben Cahoon reception, to pull Montreal to within two points, with less than two minutes to play. Mix in a third down, convert-or-die moment, and a failed two-point conversion attempt and you have one hell of a football game.

And there were a few other crucial officiating moments, outside of the final penalty call.

Late in the first half, with just seconds remaining, Durant rolled and fired deep downfield to find Fantuz along the sideline, where he hauled in the pass at the two-yard line. However, the official on the spot ruled he was out of bounds when he made the catch, and zeroes were on the clock.

“Ken Miller (Saskatchewan’s head coach), wanted to challenge but wasn’t sure if he could challenge,” recalls Johnson. “He called me over and I said ‘Ken, absolutely you can challenge. I just don’t know if there’s any time left on the clock, even if you win this.’ He just looked at me and said ‘let’s do it.’”

The call was reversed, and two seconds were put back on the clock, with Miller opting for a field goal, instead of chancing a one-shot play for a touchdown, from the two-yard line.

A lot happened during the 97th Grey Cup.

But this game will forever be known for the final two plays, the first one breaking the hearts of Montreal fans while sending Rider Nation into a brief, ecstatic frenzy, before their hearts became the broken ones.

For Johnson, too, it’s a bit of a pity that his face and voice are synonymous with that moment.

But, he was a CFL official for twenty-four years, working eleven Grey Cups. He was the referee for the 100th Grey Cup Game, in 2012, and for the wild, overtime game of 2005, when Edmonton toppled the Als. He’s also part of the only father-son combination to ever be referees in the CFL. His father, Gord, now 90-years-old, officiated three straight Grey Cups, from 1978-1980, and then another one in 1983.

“I look at that and I go, it’s kind of unfortunate that I’m defined by that,” Johnson says, though he does also look back on the moment with professional pride, too.

“I’m proud of the process we took to get to the right decision,” he says. “It was a call that we had to absolutely be right about.”

In the critical moments that followed Johnson’s announcement of the penalty, he says the Roughriders did not take it out on him or his crew. They knew they’d made a big mistake. “They were not upset at us or anything,” Johnson says.

As far as the million dollar question that was on most everyone’s mind in the days that followed the 2009 Grey Cup, Johnson cannot shed any light.