Terrell Jana was a freshman at Virginia taking part in what felt like the longest scrimmage of his life.

It was August, 2017 and while the West Vancouver, BC receiver had spent the past two years in Virginia finishing off his high school career, he was about to see a side of his new home that he couldn’t have fully anticipated.

“I didn’t know what was happening, but I remember we were in practice,” he said. “At this time I didn’t know the history of UVA. I understood the civil war and the statues, but I didn’t understand the motivations behind why this was happening.”

Charlottesville, Virginia had become a hotspot in the argument over the removal of Civil War-era statues. Its city council had voted that February to remove a statue of Confederate general Robert E. Lee from what was then named Robert E. Lee Park. There had been lawsuits filed to keep the statue and over the months that followed, tensions rose as white nationalists began to protest with torches in hand, arguing to keep the statue.

The Unite the Right rally took place on Aug. 11 and 12, where white supremacists marched on the University of Virginia campus. The white supremacists were met by counter protestors and things began to turn violent. On Aug. 12, that culminated in James Alex Fields Jr. ramming his car into a crowd of the counter protesters. Heather Heyer, a 32-year-old paralegal and waitress, was killed in the attack and at least 19 others were hospitalized. 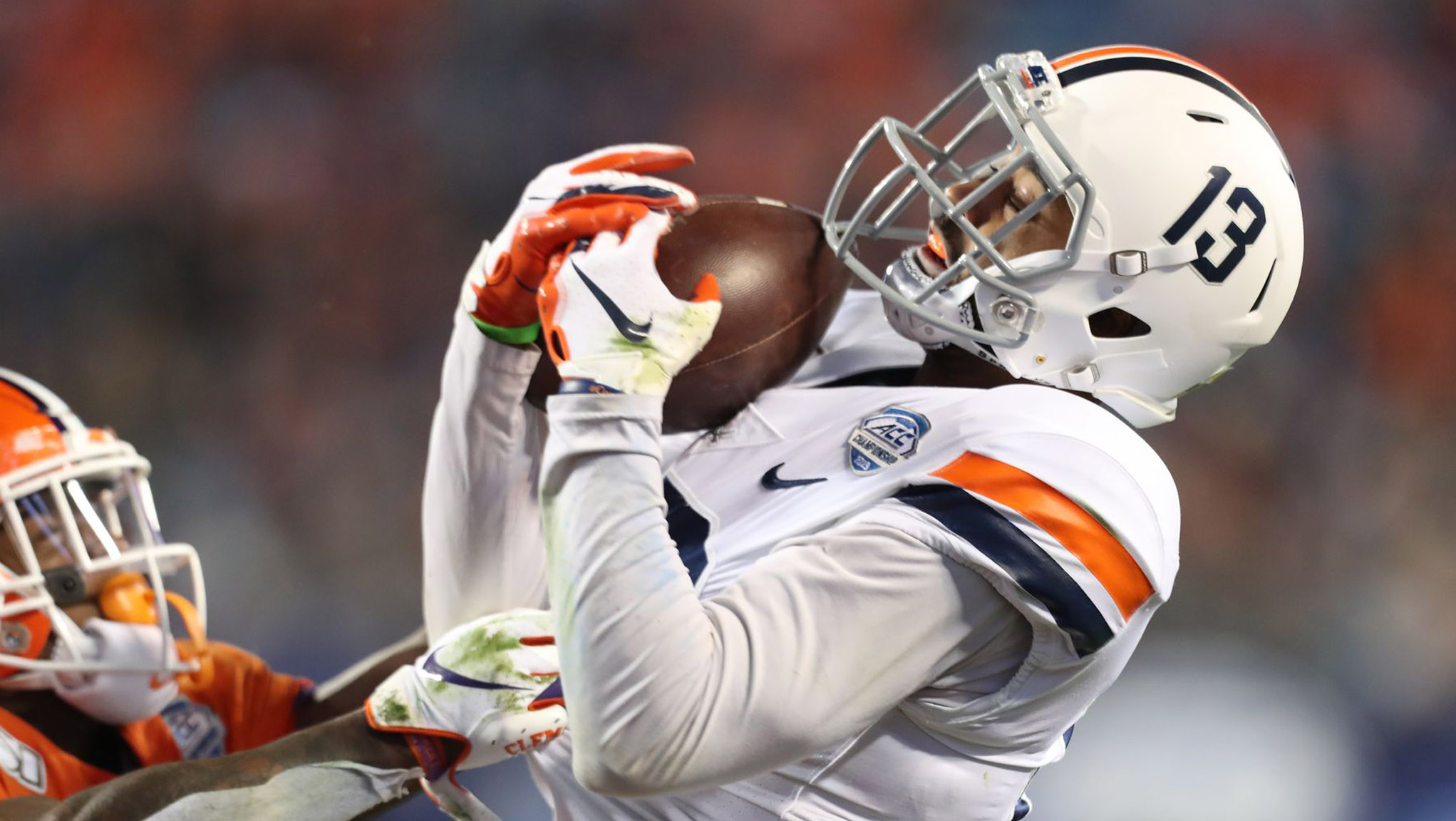 Through four seasons with the Cavaliers, Terrell Jana caught 123 passes for 1,481 yards with five touchdowns (Photo: University of Virginia)

It was a moment that felt like the world stopped and put its attention on Charlottesville, where hatred had boiled over into the worst imaginable scenario and where Jana would be playing football at for the next four years. After that long, long scrimmage, the coaches informed the players of what was happening nearby.

“My mom had come to visit me. I’d just moved in and she came to help me. She left that weekend,” Jana said.

“When she was here, things were brewing up but she left and then everything went down.”

A lot of athletes in Jana’s spot may have seen what happened that weekend and decided they’d seen enough. It wasn’t easy at times, but Jana said he committed to Virginia to grow, both on the field and as a young man. When you’re a Canadian playing Div. I NCAA football through these last four years in the U.S., you’ll get both.

“I think I came at the perfect time, for why I wanted to be here. I came at a time of such chaos and turmoil and challenging times,” he said.

“Why I came to UVA, why I came to Woodberry (Forest, a boarding high school in Madison County, Virginia), was to grow. I wanted to grow as a person, develop myself as a person.”

At Woodberry, Jana was in close quarters with his roommates, teammates and friends. In his second year at the school, Donald Trump was elected president.

“It shook not only the nation but my school as well,” he remembered. “The school I went to, the student body was super conservative. I was having the most amazing conversations with my roommates, with my friends over the past year, people that were avid Trump supporters. Of course, I’m a Canadian guy, I’m from Vancouver on the west coast of Canada and now I’m in central Virginia and we’re having these conversations.

“I was super lucky to be in an environment where we already had good relationships and we could have these conversations and not take things personally. I think that set me up to embrace a lot of the stuff that came after it.

“I understand the humanity in everybody. I’ve seen it firsthand, I’ve seen it with my roommates. We had hours-long conversations every night about that. I’m lucky in that I’ve got that experience. I think it’s helped me understand my own beliefs more. I’ve gotten stronger in certain convictions, I’ve challenged myself in certain beliefs. In that aspect, I feel lucky because I got to experience such a challenging time that helped me grow.”

In his senior year at Virginia, Jana continued to learn and grow. He paired up with 11 teammates to form a group called The Groundskeepers, that works toward actionable goals in its quest for racial and social justice movements. The group’s name was inspired by the area that the white nationalists marched on the UVA campus, The Grounds, as a means of reclaiming it.

The name of The Grounds itself has its own notoriety. UVA was built by slaves and the founder of the university, Thomas Jefferson, was a slave owner. On the third anniversary of Heyer’s death, the group marched from the spot where she was murdered back to campus, with a stop at the Memorial to Enslaved Laborers.

The Memorial resonated with Jana. Seeing nameless slaves memorialized by nothing more than a blank space and their occupation was something he couldn’t stop thinking about. As a tribute to those nameless people, Jana played the 2020 season without a nameplate on the back of his jersey.

It’s something he spoke very openly about at the start of the season.

“UVA’s history is bounded with slavery, since its inception from the founders from the late 1800s, early 1900s, the people who graduated from UVA and people were taught here, there’s been a rich history of slavery at UVA,” he said in October.

It was a bold statement to make, one that even a few years ago you may not have heard from a player on the active roster of his college program with hopes of playing professionally in the coming year.

“The only thing I was worried about is that we have the first Black woman AD in a Power 5 school ever,” he said, of Virginia athletic director Carla Williams. “This past year me and the team talked about how we didn’t want to put her in a bad position. She had to make some tough decisions. The only thing I was worried about was putting her in a bad spot, we didn’t want to do that.

“The other thing was, it wasn’t a snap decision. I’d thought about that a long time, the whole summer. I’m consistent in my beliefs and the reason I’m doing it, I was willing to take a risk. There was nothing that could have knocked me off that path.”

His mind was made up on the matter, but he was thankful for a supportive head coach, in Bronco Mendenhall and teammates that stood with him on it.

Any type of lengthy conversation with Jana reveals a person that’s grounded in who they are, what they believe and in the fact that they’ll accomplish what they put their mind to in life. That applies to his football options, which may pop up on either side of the border and in his post-football life. Those plans aren’t crystal clear yet — he seems to let his unfolding life help steer that journey — but you get the feeling that he’ll be creating change wherever he goes.

“What I’m passionate about is, while my career is going on is using my platform, using the attention I get to be a megaphone for good causes and people in the community doing work and I think being of service to the community wherever I’m at,” he said. “My goal in life is to serve underserved communities wherever I am.”

After football, that could involve law school but his focus is on the first, fun part of the journey for now. CFL.ca’s Marshall Ferguson has Jana going sixth overall to Ottawa in the latest version of his mock draft. Between this weekend’s NFL Draft and the CFL Draft on May 4, Jana should have some clarity on what those next steps might look like.

When he looks at the big picture in his life, he knows that’ll come together too.

“Trying to serve underserved communities is my goal,” he said. “If I can do that in some way, shape or form I think I’ll have a happy life.”