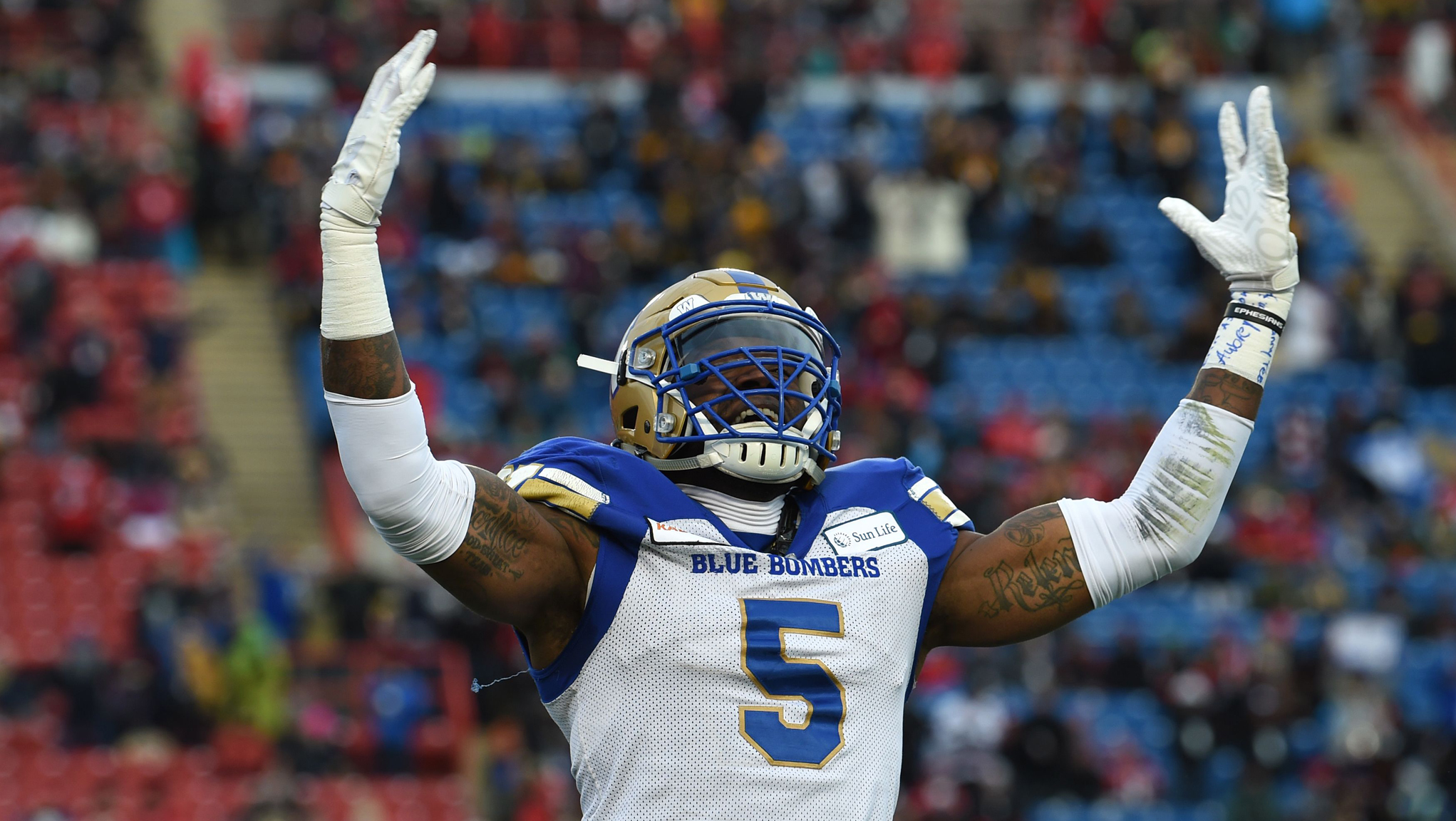 Willie Jefferson was a major factor in the Blue Bombers victory over Hamilton in the 107th Grey Cup (Candice Ward/CFL.ca)

The Winnipeg Blue Bombers’ defence might be used to flying under the radar by now.

It was like that all year in 2019, until the 107th Grey Cup when Winnipeg shut down the CFL’s highest-scoring, top-producing offence en route to a drought-busting 33-12 victory over the Hamilton Tiger-Cats.

Twelve points were all Brandon Banks, Bralon Addison, and the Ticats could muster that night in Calgary, and while Andrew Harris was named Most Valuable Player and Canadian for the contest, it was Willie Jefferson and the Winnipeg defence providing a breathtaking backdrop on a picture perfect night for the Bombers.

With three sacks and two forced fumbles, Jefferson caused nothing but chaos for the Hamilton’s usual high-octane attack, which was held to just one touchdown and 298 yards of offence. The Bombers totaled six sacks and seven takeaways in the game, while Hamilton’s offence managed just 24:29 of possession. In the end, the league’s most explosive offence in the regular season was held to just one explosive play offensively.

A year and a half later, led by a veteran coordinator, a dominant pass rushing duo, and a revered middle linebacker, the Bombers’ defence is one to be respected and certainly feared.

On paper you see a middle of the pack defence from 2019, ranking fifth in the league in opponent points per game (21.5), yards per game (343.7), and total first downs (365), three defining statistical categories.

But something changed in November, when the Bombers ran the table in the hotly contested West, with road wins over Calgary and Saskatchewan before a trip to the Grey Cup.

Harris, a dynamic and multi-talented running back, deserves plenty of credit for that magical month, along with the savvy trade deadline acquisition of quarterback Zach Collaros by General Manager Kyle Walters.

But in the playoffs, the defence had become the backbone of a suddenly emerging juggernaut, allowing an average of just 315.7 yards per game in three post-season contests — including a stunning upset of Calgary in the Western Semi-Final in which the Stampeders mustered only 207 yards of offence.

RELATED
» Ready for Kickoff: Previewing the 2021 CFL season
» A look at every team’s Off-Season Depth Chart
» When it comes to special teams, Winnipeg sets the gold standard

There were always signs the Blue and Gold could play at an elite level defensively, starting with a smothering run defence that allowed a CFL-low 64.2 yards per game (nearly 30 yards per game fewer than second-place Saskatchewan).

That forced opponents to be one dimensional, with the Bombers facing a league-high 661 passing attempts in the regular season. Opponents all but abandoned the run on first down against Winnipeg, rushing the ball just 176 times for 804 yards in such situations, comparing to a league average of 222 rushes on first down for 1,146 yards.

On many of those 661 snaps, opposing quarterbacks had to deal with arguably the best defensive player in the CFL. Jefferson had 12 quarterback sacks for a league-high 106 yards, to go with two fumble recoveries and a league-high six forced fumbles. His 16 pass knockdowns also led the league and set a record for defensive linemen.

Jefferson and the rest of a defence that caught fire that November remains largely intact for 2021.

Veteran coach and former CFL defensive back Richie Hall, the league’s active leader in games coached, returns for a sixth season as the team’s defensive coordinator.

Perennial all-star Adam Bighill continues to anchor the defence from his middle linebacker position alongside Kyrie Wilson and SAM linebacker Mercy Maston, who settled into the role nicely late in 2019.

Like always, there are questions to play out in camp, namely who will replace departed veterans Drake Nevis, Marcus Sayles, and Winston Rose?

Nevis was a force on the defensive interior, closing down rush lanes against many of the league’s top running backs. Jake Thomas, the longest-serving Blue Bomber, returns to the defence, but will likely have someone new playing beside him. 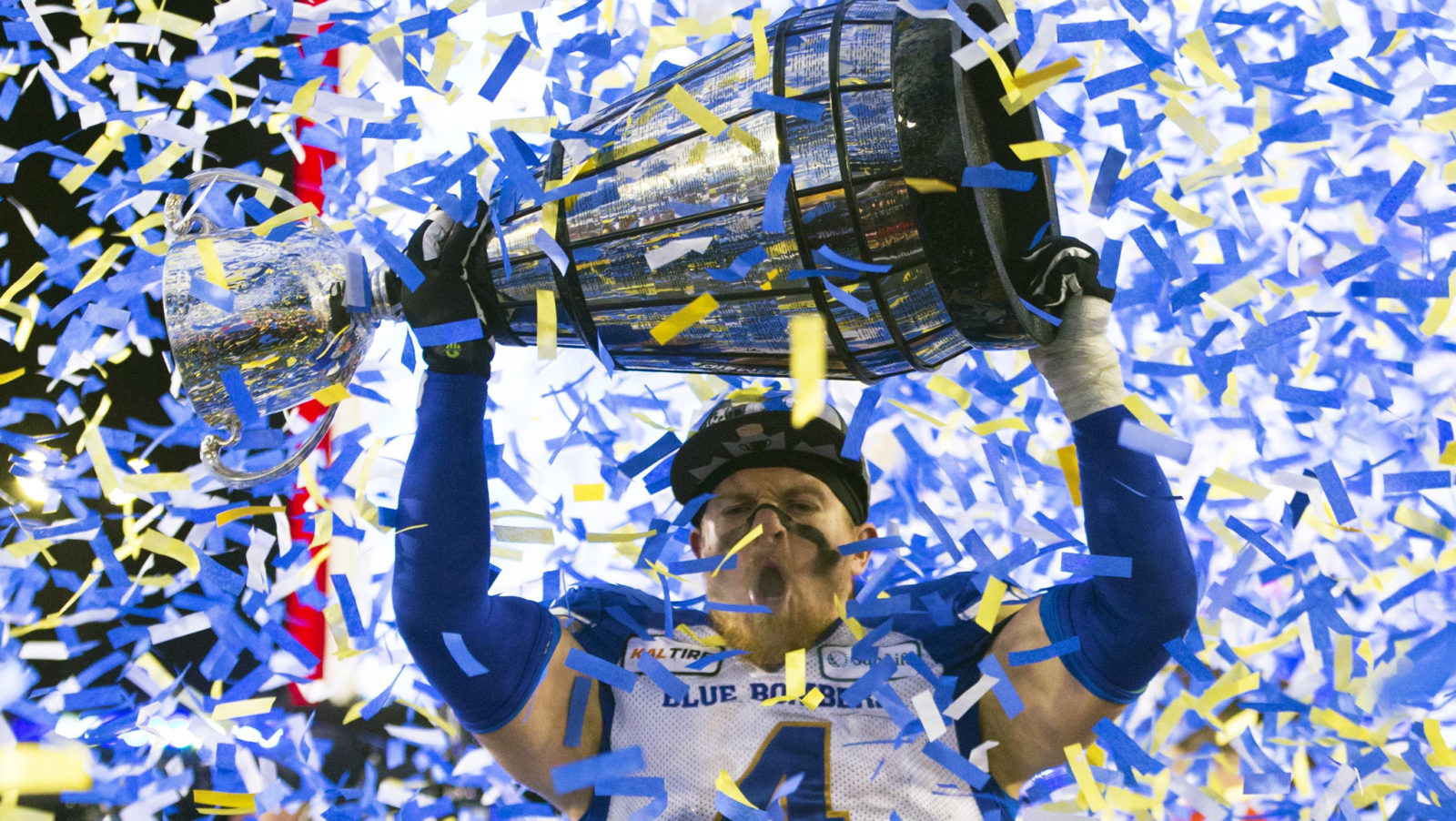 Adam Bighill tallied 61 tackles, four sacks and two interceptions in 2019 to go along with his Grey Cup victory (The Canadian Press)

In the defensive backfield, Marcus Sayles departs to BC as a free agent, while 2019 CFL interception leader Winston Rose vies for an NFL opportunity. Free agent and versatile defender Josh Johnson comes over from Edmonton, but the secondary will feature stiff competition come training camp.

Alexander, who took over at safety late in the season, has become one of Winnipeg’s most reliable defenders since joining the league in 2017, while Jones is the favourite to start at corner after breaking out in the playoffs, recording four tackles and an interception in the Grey Cup.

Versatile edge Tobi Antigha, who played some linebacker with the Argos in 2019, joins the defensive end rotation along with Canadian and former fifth overall CFL Draft pick Jonathan Kongbo, who’s back from the NFL.

In the end, as teams grapple with a global pandemic that’s kept them off the field for nearly 20 months, the Bombers hope experience and continuity on all sides of the ball will provide an edge over the rest of the league.

“The group we finished with in 2019, we’ve tried to bring the majority of that group back,” said Walters, now in his ninth season as general manager. “We did try to follow the same blueprint in regards to the personnel end of things. From a veteran standpoint we tried to bring back a similar core.”

“I fully believe that having the veteran presence we’re going to have to start camp is going to be vitally important,” added Head Coach Mike O’Shea. “To try and quantify how that advantage is going to play out is hard, but I think it’s going to make our camp go much more smoothly.

“The amount of work these guys put in in the off-season . . . It’s comforting as a head coach to look around and see a bunch of veteran guys show up.”

For the team that last won the Grey Cup, the less change the better. This defence has the chance to be one step ahead come training camp.