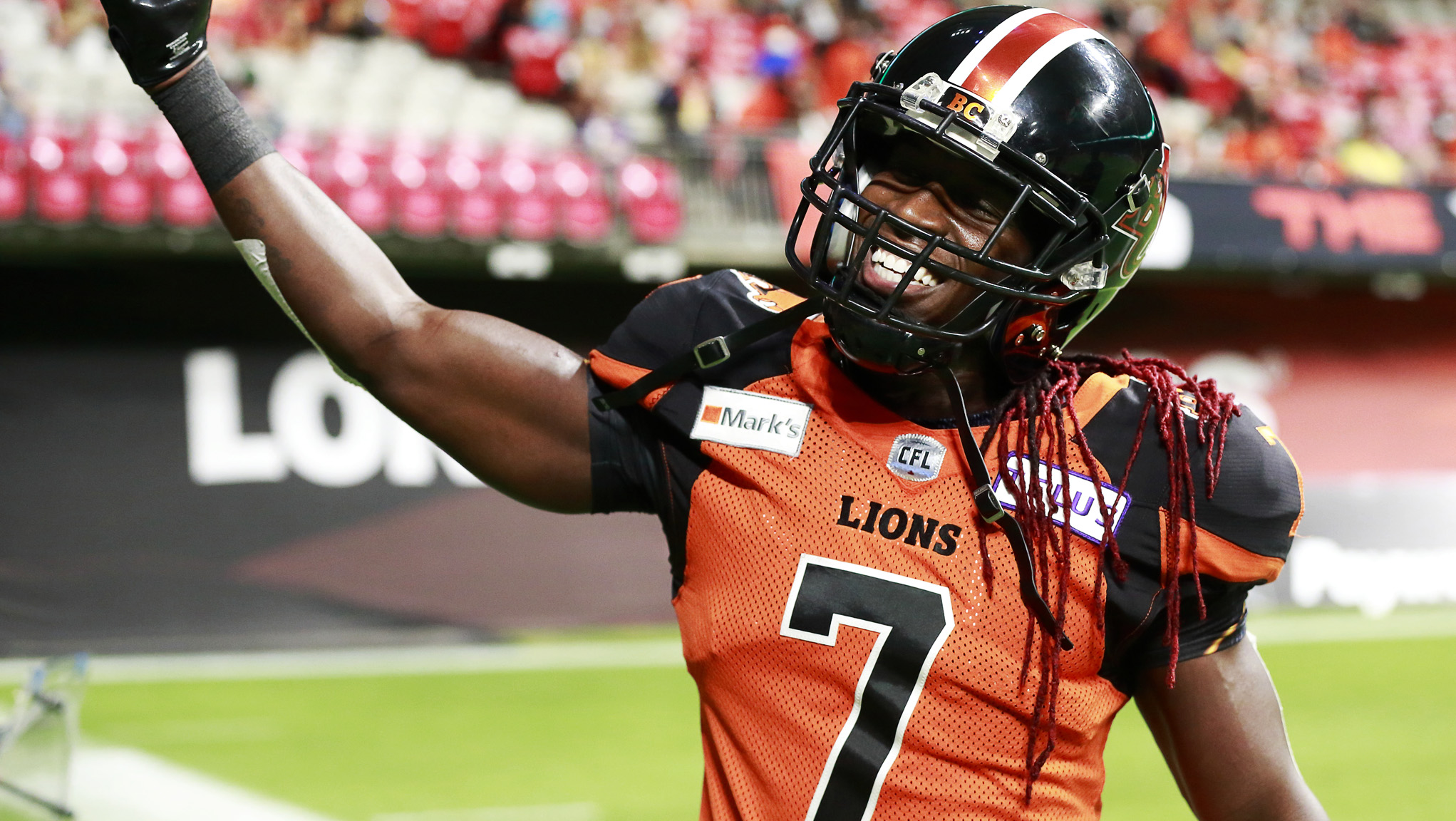 Hello, Bryan Burnham. Getting up to your old tricks, again, I see. Making catches and leaving DBs thinking “what more could I do?” Let’s just change the spelling of your name to “Bryan Burn’em” already.

GET EXCITED ABOUT THE BC LIONS

Don’t focus on who they played on Saturday night, if you’re one to disrespect the Ottawa REDBLACKS.

That was about their most complete effort of the season, showcasing a team that can move the ball in either straightforward or creative fashion, while keeping a pretty tidy pocket in place for quarterback Michael Reilly. Remember how much of a problem that used to be?

Defensively, the Lions swarmed the football, showing off tight coverages and tackling parties all over the field.

On specials, they’ve got the blazing speed of Lucky Whitehead and the smarts and still decent burners of veteran Chris Rainey.

When asked what team in the West is most likely to give the Winnipeg Blue Bombers a good tussle as this season unfolds, would you not say that right now it looks like the BC Lions?*

*Subject to the continued availability of the franchise quarterback.

BONUS TAKEAWAY: Ask and ye shall receive. About three weeks ago, Whitehead took to Twitter to publicly ask for a little special teams work. “We wanna continue to use both those guys,” said Campbell, after Saturday’s win, confirming that Whitehead will get more of what he wants, going forward. Let’s see, was it the 119-yard missed field goal return that solidified that, coach?

THEY DON’T KNOW HOW TO TAKE “YES” FOR AN ANSWER

If ever there was a tailor-made situation for bringing in an inexperienced back-up quarterback for meaningful, learning reps in a game, it was the fourth quarter of the Lions’ walkover against Ottawa.

Young Nathan Rourke, we would assume, could benefit from taking meaningful snaps in a game against an angry defence looking to ensure they weren’t further punctured by a newbie.

But Lions head coach Rick Campbell did not pull the ‘chute on Michael Reilly until there were two minutes remaining in the game. And you know Reilly, himself, would never suggest it to the coach, no matter the score. Just not what he’s gonna do. Reilly gonna Reilly.

RELATED
» Steinberg’s MMQB: Putting the league on notice
» Bombers building a defensive identity in Winnipeg
» Back on the plus-side, Reilly looks for next steps

Seems like an opportunity lost. However, in fairness, there is another way to look at the situation.

“You don’t wanna send a message to your team that we’re done when there’s eight or nine minutes left in the game,” said Reilly afterward. “That just sends a bad message.”

“It is tough to kinda figure out when it’s actually in hand in the Canadian Football League,” he added.

Didn’t seem hard to figure that out on Saturday night, though.

After a Labour Day Weekend win in Sasky, Winnipeg’s Mr. Everything, Willie Jefferson, insisted that it was not a statement game. Sure, they broke serve in Regina, but if you know anything about tennis, a break is not a break unless you follow it with a hold.

It’d be a statement, Jefferson declared, if they followed up with a Banjo Bowl triumph. Which they did. Emphatically.

After Saturday’s 33-9 win over the Roughriders, Jefferson declined to boast, saying merely that it was a statement “that we play as a team.” Yeah they do.

Meanwhile, over in Edmonton, a statement of another kind: If you were counting the Calgary Stampeders out after their 1-4 start, you should at least give that a little bit of a second thought.

The Stamps have Bo Levi back at quarterback, and they have Kamar Jorden bein’ all Kamar Jordenny, so an ongoing ignition of that offence seems imminent. And in sacking Edmonton quarterback Trevor Harris seven times, maybe the defence just got lit too.

Their 32-16 win over the Elks came with growing confidence in a blossoming second-half performance, punctuated with an exclamation mark when Jorden hauled in a bomb for a TD with just ten seconds left on the clock, giving Calgary a win in the season series point differential, should that come into play when the gales of November come slashin’ and playoff positions are to be determined.

Winnipeg’s statement was shouted from the rooftop, over a thousand-watt amplifier. Calgary’s was more of a tap on the shoulder and a “hey, we’re still here, ya know.”

Toronto’s victory over the Hamilton Ticats was – shall we say – a bit uneven?

A pretty impressive first half, mostly neat and tidy, became a forgettable second half, where the Argos just about gave it away, hanging on for a 17-16 win. That second half featured a lot of questionable tackling on defence, and misfiring on offensive opportunities.

“It feels like a loss, almost, for me,” quarterback Nick Arbuckle said, post-game, pondering a performance that saw him chuck up a freebie interception late in the game. “Who does that,” he said in a self-mocking tone.

“I’m just trying to throw the ball away there and I didn’t even get it to the sideline. That’s a play that I’ve got to correct.” Yuppers.

Over in the Hamilton locker room, head coach Orlondo Steinauer was trying to see the energy drink bucket as half full, despite the loss.

“But this game ain’t about moral victories,” he added. Again, yuppers.

I’m really not sure at all who the Argonauts are at this point and after a signature win on Labour Day, I’m also wondering who the Ticats really are at the present time.

SEE? IT WAS A GOOD DECISION

There was some consternation over Hamilton’s re-signing of quarterback Jeremiah Masoli during the off-season.

With Dane Evans proving his worth, in Masoli’s absence, in a drive to a Grey Cup appearance in 2019, the Ticats’ quarterbacking was already in good hands. There was some worry that what Hamilton was doing was installing an ongoing quarterback controversy, with two bona fide starters, both of whom would want to play. Self-inflicted controversy!

But the Ticats knew one thing was for sure; it would be great to have a second, proven starter in place just in case the other one faltered at any time during a game or a season. Who doesn’t want a shutdown fireballer in their bullpen?

Here’s hoping Evans isn’t out for long, after leaving Friday night’s game with an injury that really seemed to upset him as he sat on the sideline.

But having two number one QBs certainly seems like a pretty good idea right about now.

AND FINALLY… The back shoulder fade from Zach Collaros to Kenny Lawler is the pumpkin spice of the CFL. Try as you might, you will not be able to avoid it this fall.