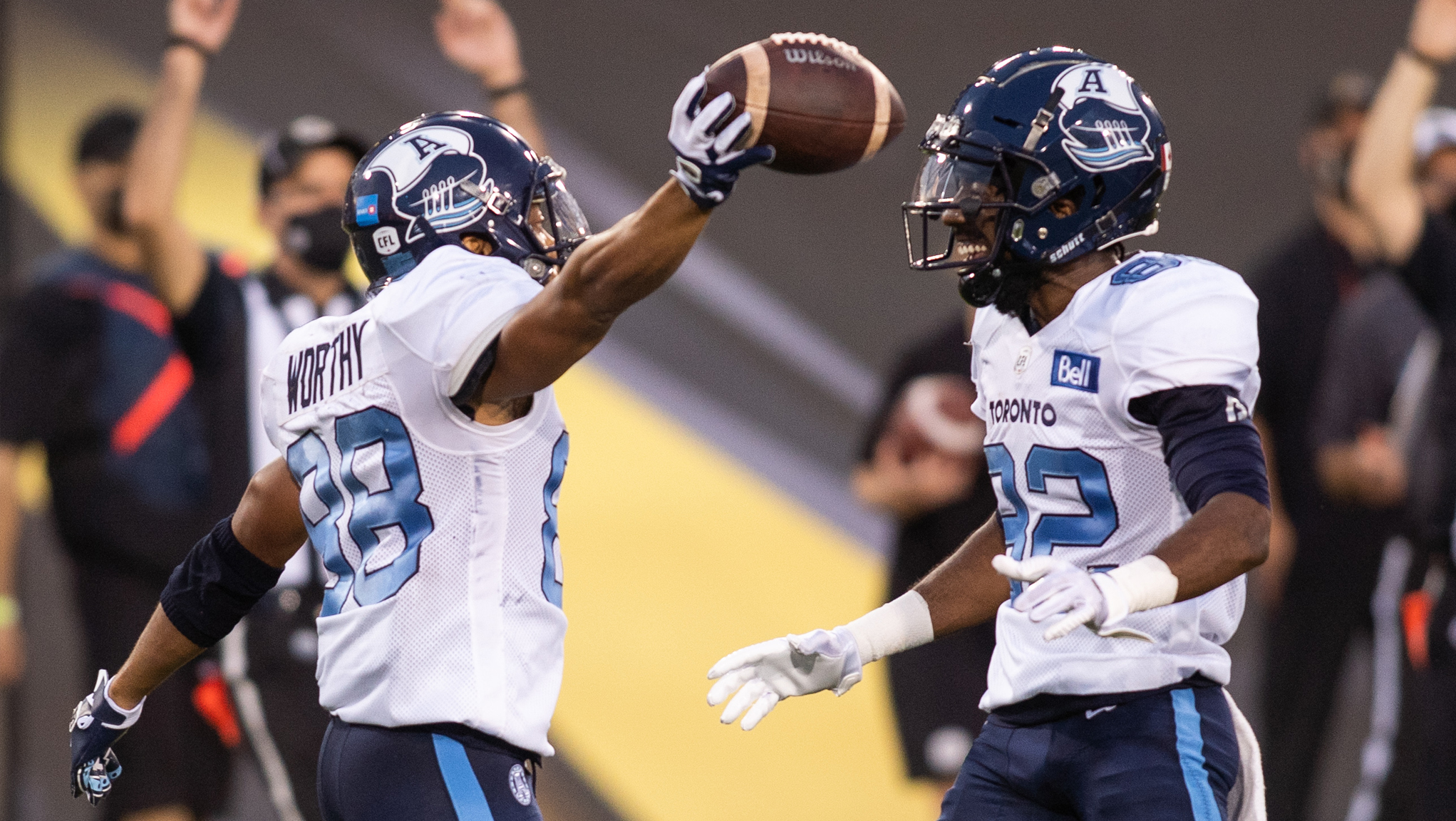 On the latest episode of The Waggle Podcast, Donnovan Bennett asked me an interesting question: who is the East Division’s best team? My answer, heading into a crucial Week 10, was the Toronto Argonauts. Well, coming out of what was an important and unique week, the Argos have staked their claim to that title. They’ve also put themselves firmly in the division’s driver’s seat.

Toronto opened and closed Week 10 with a pair of impressive victories to move to 6-3, good for first in the East and second overall. The week started Wednesday with a convincing 35-16 win at home to Ottawa before Boris Bede kicked a game winning field goal on Monday to help the Argos take a 24-23 road win in Hamilton. That’s a solid week’s worth of work, if you ask me.

I answered Toronto to Donnovan’s question because of how steady they’ve been compared to their divisional counterparts. The Argonauts aren’t doing anything spectacular or dominant right now. Instead, they’ve been able to limit the crazy ups and downs we’ve seen elsewhere. As a result, Toronto has created a nice cushion to the rest of the division and league.

Through nine games, the Argos have allowed just three rushing touchdowns against, which is tied for the lowest total in the league. Otherwise, Toronto’s defensive metrics are in the middle of the pack. The same is true on the offensive side of the ball, where they lead the league with 14 passing touchdowns but reside statistically in the middle everywhere else.

That’s by no means a bad thing. For multiple reasons, 2021 has been one of the most unpredictable and volatile CFL seasons we’ve ever seen. The ability to play steady football and limit huge week-to-week momentum swings is a huge asset, and that’s exactly what the Argos have been able to do.

For instance, Toronto has allowed 30 or more points on just two occasions this season. Defensively, the Argos have kept things manageable for their offence far more often than not. Sometimes, like Wednesday, that offence produces more than enough and wins by multiple possessions. Other times, like Monday, Toronto has put up just enough to get the job done.

Similarly, the Argos don’t currently have a top ten receiver. Instead, they’re one of only two CFL teams to boast five players with 250 or more receiving yards on the season. Toronto also leads the league with six receivers with multiple touchdown catches, showing just how spread out this offence has been.

On defence, linebacker Dexter McCoil doesn’t lead the league in any one category but is a factor across the board. McCoil has racked up 53 defensive tackles, two interceptions, and a sack and has been as steady as they come. In fact, prior to McCoil’s 12-tackle performance Monday in Hamilton, he had been the picture of consistency each week: six tackles here, five tackles the next week, seven the week after, etc.

The Argos are the perfect example of the old “pulling in the same direction” cliché…except in this case, it’s bang on. Toronto has consistently shown up with similar efforts over the course of their nine games. That’s why they’re the only East Division team above .500, and that’s why they’ve got a great chance to be hosting the Eastern Final next month.

Matthew Shiltz has nerves of steel. Montreal’s backup quarterback temporarily stepped in for Vernon Adams Jr. in Week 9 and went 4/7 for 108 yards. Well, he was called on to replace Adams one week later in a far more pressure packed situation: third and one, trailing Ottawa by three points, and with just over two minutes remaining. To Shiltz’s credit, those circumstances didn’t faze him in the slightest.

With the game on the line, Shiltz was perfect on three passing plays and added a pair of runs to move the Als from their own 45 to Ottawa’s seven yard line. Cameron Artis-Payne ran in Montreal’s game winning touchdown on the next play as Montreal sealed a second-straight comeback win. Shiltz played a role in the first win, but he was vital on Monday afternoon.

Calgary’s defence probably isn’t getting enough credit. We’ve talked lots this season about their quarterback situation and kicker Rene Paredes has justifiably been given plenty of accolades. But, after back-to-back crucial wins over archrival Saskatchewan, people are starting to talk a little more about this Stampeders’ defensive unit.

Now at 4-5, Calgary has been within a possession in every single loss this season, which is a testament to their defence. The Stamps haven’t allowed more than 23 points in a game this year, while only Hamilton and Winnipeg have allowed fewer total points. Individually, Darnell Sankey, Shawn Lemon, and Jameer Thurman have led the way as this unit starts to get the credit they deserve.

Did Toronto’s DaVaris Daniels make the catch of the season on Monday? If you’re asking me, the answer to that question is yes! Daniels’s full 360-degree, 22-yard touchdown catch would have been bonkers if you or I was defending him. The fact he made that play on an elite defender like Cariel Brooks is even harder to wrap your head around.

Finally, it’s just the one lone paragraph for the Winnipeg Blue Bombers after yet another dominant win. Bombers fans, it’s not out of disrespect! It’s because your team is just at another level right now. Friday’s 30-3 win over Edmonton was Winnipeg’s fourth straight with 30 more points scored; they’ve got the Elks again to kick off Week 11.