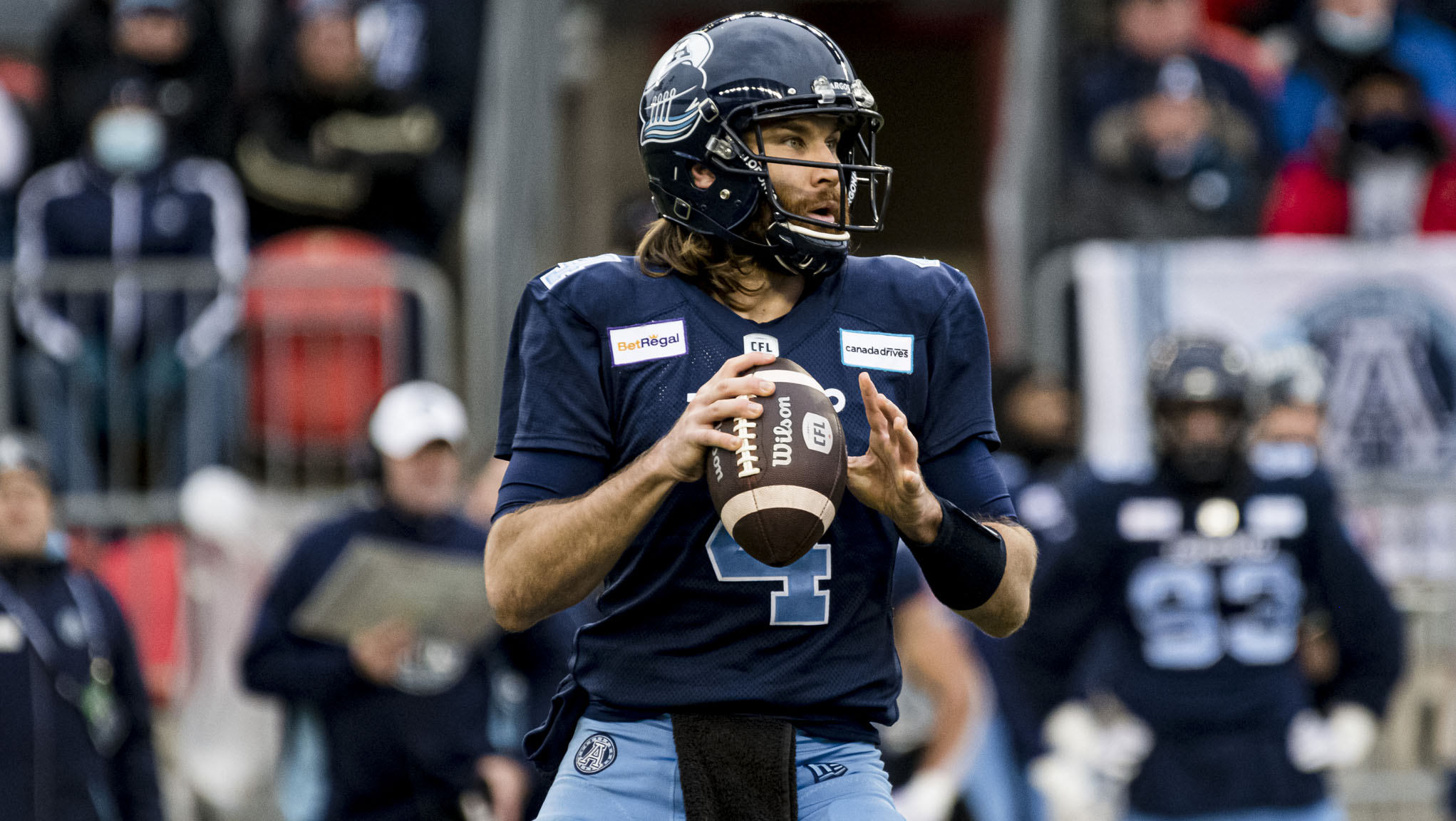 ’Tis the season for eggnog, avoiding that final emergency trip to the mall before Christmas and big CFL decisions.

One was made already in Ottawa on Sunday, when Shawn Burke became the second general manager in team history. Very soon, maybe even as you read this on Monday afternoon the Edmonton Elks could have set their course for a new direction, with either Chris Jones or Ted Gouveia reportedly in the running to control the Green and Gold’s future.

These front office moves are impactful, but nothing changes an organization more on a minute-to-minute, down-to-down basis than who the starting quarterback is.

It’s part of the reason why I love studying the position. The amount of influence one player has on the outcome of every play with their decision-making and play-making is unlike any other in sport, which leads us to the 2022 free agency class of quarterbacks that could be up for grabs if they don’t re-sign with their team before the chaos starts Feb. 8.

As with every year in the CFL’s QB carousel, there are varying levels of talent available but with the sheer number of CFL free agents pending each off-season there is always a golden goose or two to be had, depending on your belief in their talent and fit within a potential new offence.

Let’s take a look from the depth options, to the franchise altering game changers. 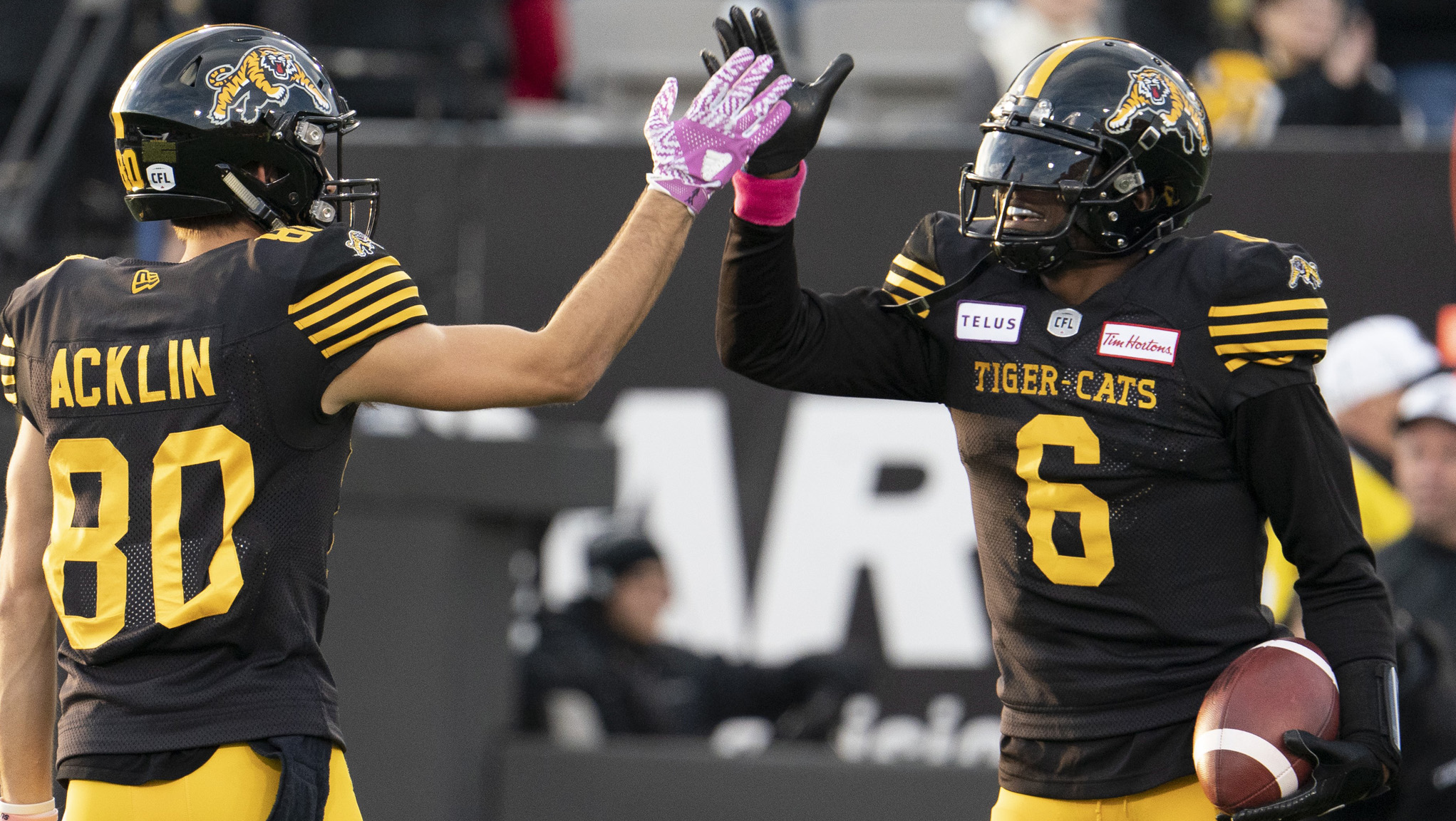 David Watford stepped in for Jeremiah Masoli and Dane Evans when they were injured and led the Ticats to a pair of wins this season (Photo: The Canadian Press)

After a rough 2019 season in Ottawa I was surprised to see Marcel Desjardins and Paul LaPolice bring Dominique Davis back for 2021, but in hindsight — just like the Arbuckle for Nichols move — it’s clear that LaPolice wanted to have quarterbacks in Year 1 that understood his scheme and methodology. Davis did from his time in Winnipeg with the new Ottawa head coach, so that bought him a year but a series of poor performances in relief of Nichols culminating in an interception and hamstring injury trying to chase it down is likely the end in Ottawa for Davis. I could see him landing in Edmonton or Saskatchewan as a short-yardage quarterback with the Riders being an interesting thought experiment after Jason Maas wanted to show so much variety in packages this season.

David Watford has shown flashes of potential and certainly excels as a short yardage backup, but the Ticats’ offence was just trying to survive on a rainy Wednesday in Ottawa this year when Watford had his best performance. With a limited playbook at his disposal, offensive coordinator Tommy Condell did what he could in scraping together a win with Watford, but there is still much to be desired. I believe Watford stays in Hamilton to back up either Dane Evans or Jeremiah Masoli in 2022.

All season long Sean McGuire was the touchdown shark that frustrated fantasy football fans to no end as he stole score after score on the goal line. In week 15 in Montreal, McGuire got the chance to make his case for future employment and got exposed — albeit with a group of backup Bombers — going 11-26 with four interceptions. It’s not that growth isn’t possible, but I don’t see it right now and it will take a leap of faith for an organization to think of McGuire as more than a powerful touchdown plunger in 2022.

Isaac Harker made some great throws in rare relief of Cody Fajardo, who led all CFL QBs in percentage of snaps taken in 2021 (91.5 per cent) but it felt like he was slowly bumped to the outside looking in when Hamilton hosted Harker and Mason Fine in the final week of the regular season. Saskatchewan knows Harker better than anyone and if they don’t bring him back I wonder what team will feel the need to request his services over a potential negotiation list quarterback pickup. 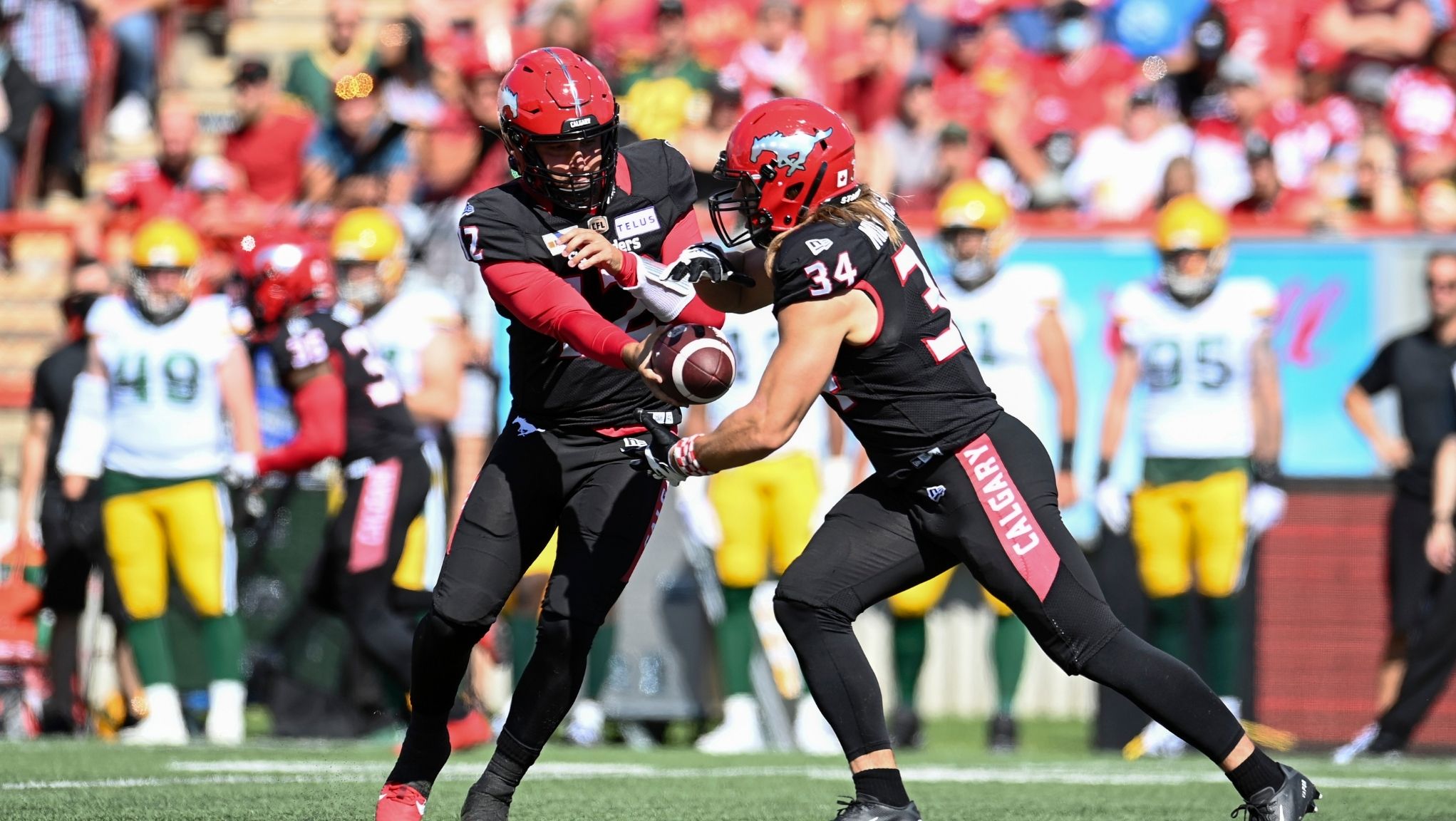 Calgary backup Jake Maier held his own when Bo Levi Mitchell was injured. Teams around the CFL may have an interest in him, the same way they did around Nick Arbuckle in 2019 (Candice Ward/Stampeders.com )

Once again the free agency quarterback market feels as though Calgary is a key decision maker. Whether it’s because of their eye for talent before coming north, or ability to develop passers once here, the Stampeders who saw Nick Arbuckle come and go now have a choice to make on Jake Maier.

In relief duty of Bo Levi Mitchell this season, Maier showed boatloads of promise; maybe just enough to interest the boat men of T.O. as they could target a Stamps passer for the third-straight free agency period. It was through different regimes, but the Argos reportedly offered Bo Levi Mitchell a monster deal in 2018 and courted Nick Arbuckle in 2019 before eventually landing Arbuckle via trade for Matt Nichols. Oh what a tangled web we weave.

As for Micheal O’Connor, the Ottawa born big man can spin it with the best of them but was passed over in a week of open competition in Calgary to see who would replace an injured Bo Levi Mitchell. Regardless of where the REDBLACKS’ starting quarterback chase takes them I’d love to see O’Connor in the nation’s capital. We’re so quick to give the Duck Hodges of the world a chance, but refuse to let O’Connor touch the field? No more.

With Matt Nichols, we’ve seen him have success in this league but after an injury ended his 2019 run, he was picked up by Toronto then sent down the road to Ottawa. In his only season with the REDBLACKS, he had a less than lacklustre 2021 before getting pulled for a plethora of depth options after another injury. I’m just not sure who is going to view that as a must have item for the assumed ticket price.

The greatest wildcard of all though is Trevor Harris. Released from the Alouettes at the time of this writing, the veteran master of efficiency was due some big money Montreal was never going to dish out, but his potential to be great still very much exists.

In Montreal during the home stretch of 2021 Harris showed what he can do, producing offence out of thin air, even without great chemistry with receivers or scheme. Any team that gets him will improve, but with only nine starting spots available will anybody see him as a starter considering the names already in place and those younger arms like Evans looking to take the jump to prominence? 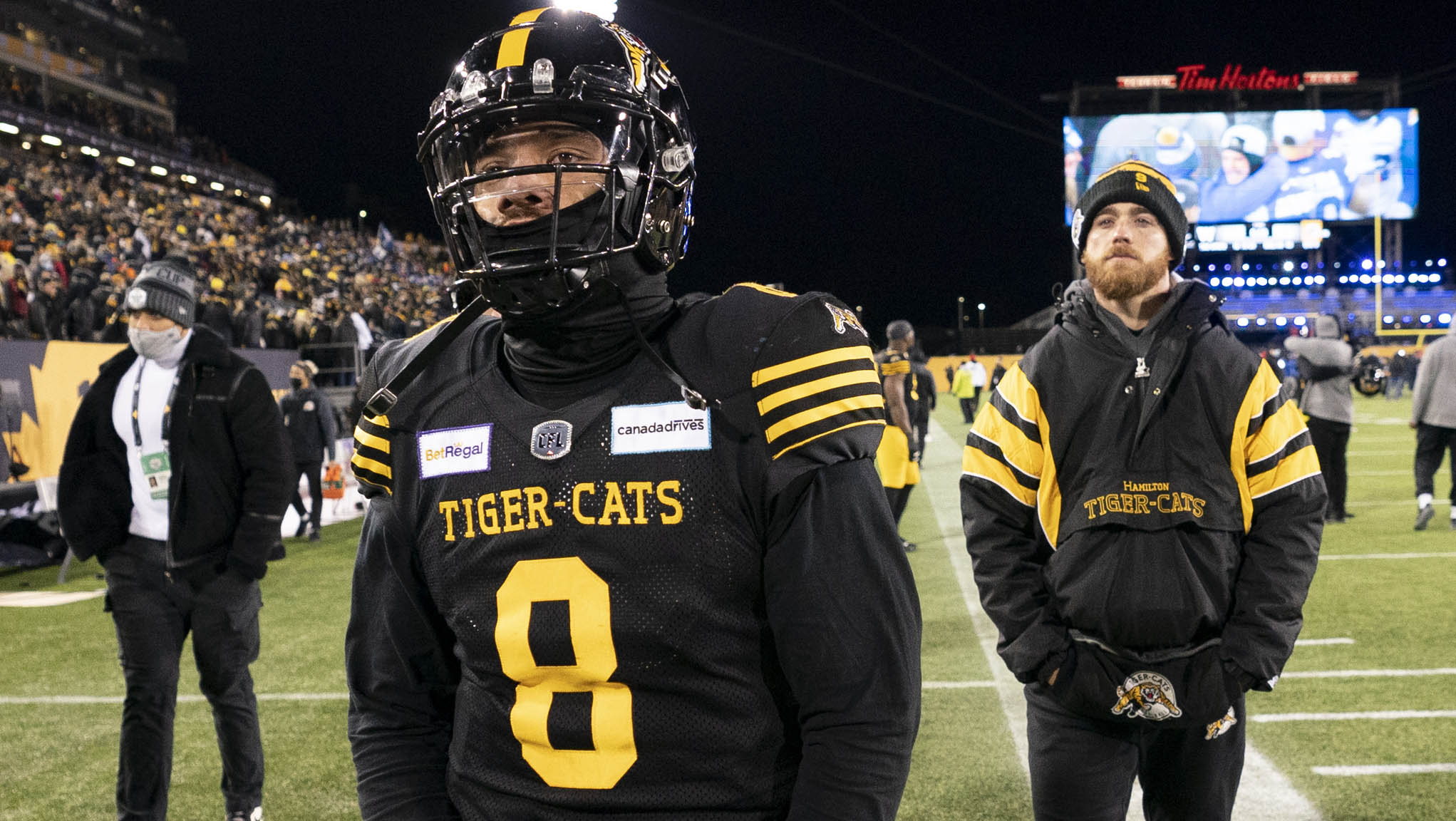 The Ticats will likely have to choose between their top-two quarterbacks this winter, with Jeremiah Masoli and Dane Evans headed to free agency (Peter Power/CFL.ca)

McLeod Bethel-Thompson was a conundrum entering 2021. Viewed by many as a compiler of garbage time stats in 2019, chasing NFL dreams through The Spring League in 2020 and re-appearing in Toronto despite Nick Arbuckle being viewed as Toronto’s franchise pivot, it was anyone’s guess how McBeth’s year would go.

All he did was lead several game-wining drives, win a bunch of close games and make Arbuckle expendable via trade to Edmonton. I understand those who are put off by his approach because he’s different, throws too many interceptions or whatever way you’d like to tear a quarterback apart, but I’ve come to appreciate his game and personality.

Despite a rocky end to the season with a COVID protocol violation, camera shove and home playoff loss I believe Bethel-Thompson is a very worthy contender for a starting job in this league. But with only nine chairs existing I don’t see the Argos or McBeth looking to sever ties anytime this off-season.

Dane Evans is a starting caliber quarterback. He has shown the work ethic and demeanor to take on the role and prove he can lead a team as the No. 1 passer. Take this for what you will, but I talked to two people from different organizations at Grey Cup week who each strongly believed that if Shawn Burke became the Ottawa GM, Evans would be his No. 1 free agency target.

Whether it’s in Hamilton, Ottawa or even somewhere else, Evans will start Week 1 of the 2022 season and I can’t wait to see him embrace the challenges and the ups and downs that come with it. Considering the adversity he’s faced in two Grey Cup visit worthy seasons, I think he’s already forged by fire and ready for the next step.

Jeremiah Masoli has long been the great question mark in Hamilton, and never more than now. Masoli’s journey from junior college to Oregon, Ole Miss, Edmonton and the ups and downs of Hamilton have been well documented. The 33-year-old vet of the Black and Gold is coming off a 2021 season that saw big struggles to start, compounded by injury before reclaiming his starting role, pushing Hamilton towards the playoffs before losing an important regular-season game to Toronto. He then won a home playoff game and was quickly replaced in the Eastern Final but somehow miraculously was handed the Grey Cup keys with a lead against the former Hamilton quarterback he replaced in 2018, only to throw a game-ending interception in overtime.

The roller-coaster never ends with this guy and the entertainment value for an agency of chaos is drool inducing, but for fans of stability and measured, linear progression Masoli might not be the guy. All of which is to say that Masoli likely ends up back in Hamilton, or down the road in Ottawa with either shoe likely dropping after Dane Evans makes his decision. One fascinating — and unlikely — outcome to me would be Masoli in Toronto with Jake Maier and McLeod Bethel Thompson playing off Evans’ decision on Ottawa or Hamilton.

I recently wrote an article on having maximum respect for ‘Zach Collaros: The King’. Aside from watching Riders fans angrily squirm at the thought he was traded away before winning back-to-back Grey Cups for their prairie rivals, my favourite reaction to the article was those who assumed it would make him the hottest commodity in the free agent market. While that might be true, it is never more honest that it’s in Winnipeg where Zach has earned the right to play out his productive CFL days after being the conquering hero Bombers fans have waited decades for.