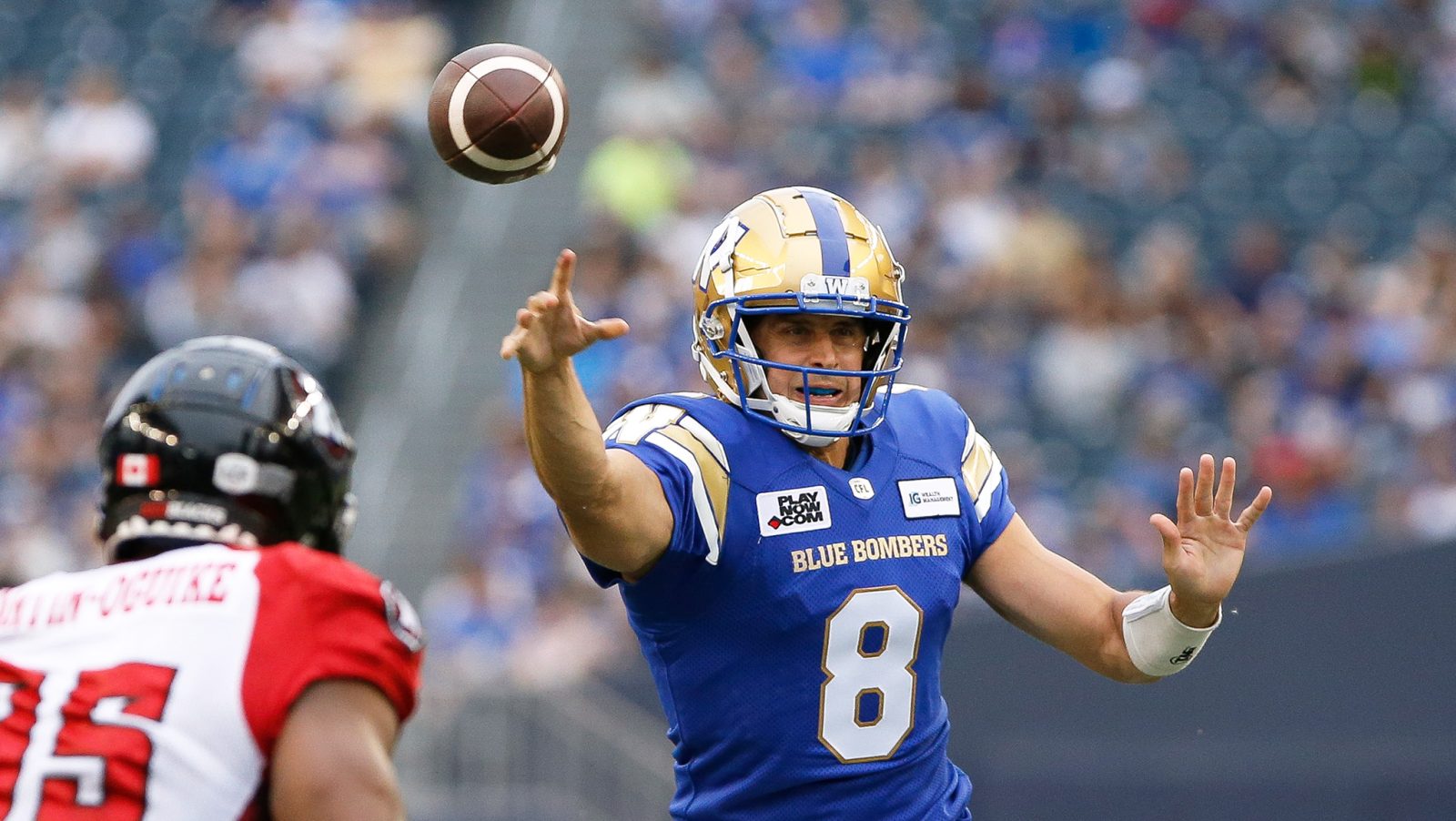 As the 2022 season kicked off all eyes were once again on the quarterbacks. Would Bo Levi Mitchell return to dominance? Is Vernon Adams Jr. ready to push Montreal over the top? Can Dane Evans be the leader Hamilton believes he is and is Cody Fajardo the answer, or the question in Saskatchewan’s downfield passing attack?

For every passer, there are themes, trends, concerns and notes worth celebrating. The best way I know to identify the good, bad, ugly, exciting and interesting is to study their games right down to the very last throw.

Where does it go? Which receivers do they favour in certain parts of the field? Which formations are they most likely to pass out of? On and on we could go with the seemingly endless possibilities of analysis, but one of the best ways I find to assess individual game performances is putting together a target chart.

Once you get used to what you’re looking at, each target chart tells a story of where the quarterback was focusing, areas the defence was making impossible to attack and even tendencies ranging from downfield aggression to touchdown throw prevalence in certain areas of the 65-yard wide landscape.

Each week here on CFL.ca I’ll be bringing you Target Tuesday with some of my favourite charts from the weekend that will serve as an additional visual aide to help piece together what you saw over the weekend. And helping to reveal the tendencies of  your favourite quarterback’s performance.

Keep in mind everything is relative and there is always something to be gained with the context of watching games closely. These target charts are simply a visual tool to help add to the never ending quarterback discussion. 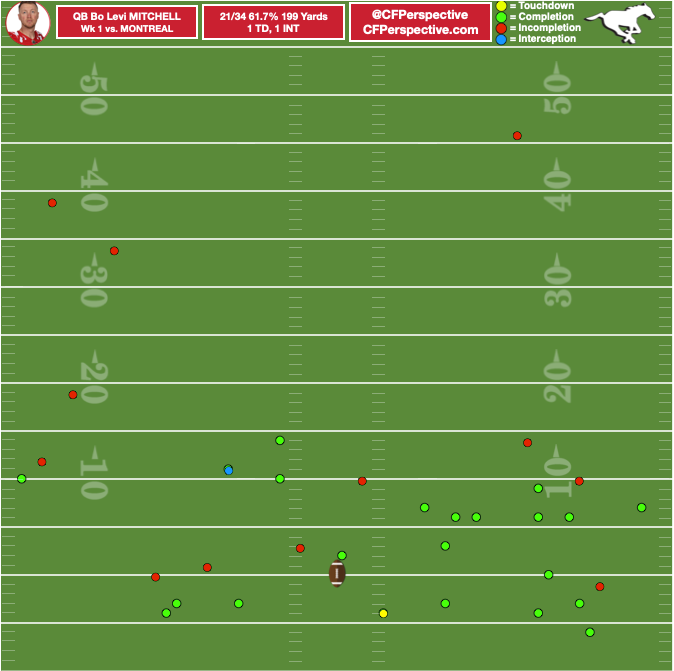 Mitchell came out of the blocks a bit lukewarm as he had his sights set on showing fans that his injury hampered 2021 season wasn’t his truest self.

What jumped out for me at the half was that Mitchell completed just 50 per cent of his passes, but watching a little more closely, you can see that many of those throws (chalked up in stat columns as misses or incompletions) were a matter of the Stamps quarterback trying to put his receivers in the best position possible to make a play.

Reggie Begelton runs through a window right into traffic and Bo tries to slow him down to avoid a major collision? Incomplete.

These throws added up to an unspectacular stat line, but based on the process there are much better days ahead for the Calgary passing attack once they begin to develop a rhythm. 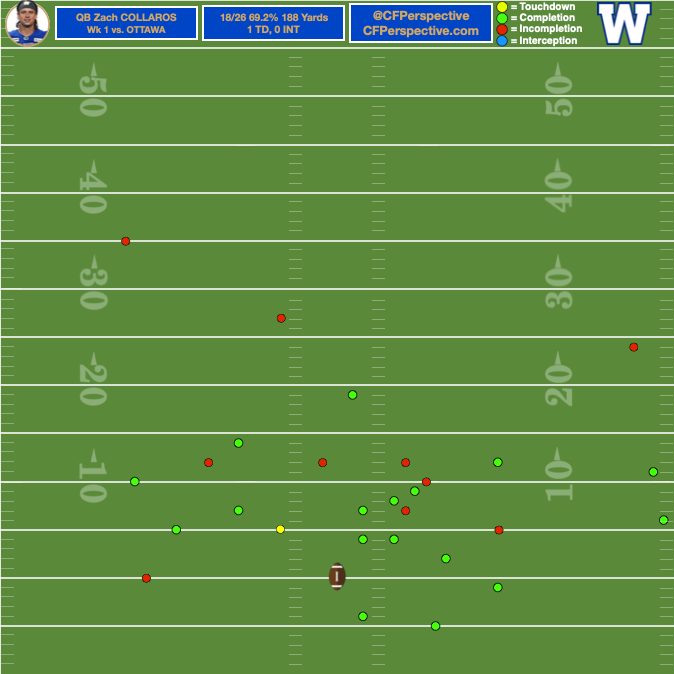 From underhand flips to Brady Oliveira in space to an immediate connection with Greg Ellingson, Collaros was his usual cool, playful self in Week 1. It’s easy to forget now that Collaros has two Grey Cup wins and 20-starts under his belt with the Blue and Gold.

However, watching him battle against former Hamilton quarterback Jeremiah Masoli was reminiscent of Ticats’ training camp from nearly a decade ago, where the two former teammates would each run an offensive unit with their unique and successful styles.

For Collaros the order of the day was attacking Hamilton in the middle of the field.

After so much discussion about getting the ball to the edges and throwing vertically to the short side as a result of the hashes getting a readjustment this off-season, the CFL’s Most Outstanding Player in 2021 used his veteran savvy to go counterculture. Picking apart Ottawa the way he’s always done to opposing offences, maneuver the pocket with great ease and take the ball where the defence leads him. 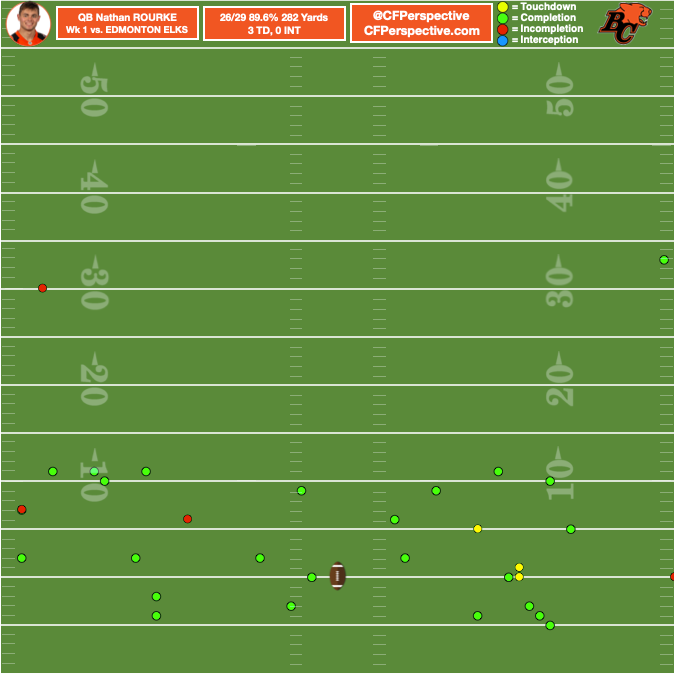 I’ll admit it, heading into Week 1 I was nervous for Rourke as a Canadian ex-quarterback. I was pulling for him to fly the flag for all before him and all that will use his success as a jumping off point for future opportunities.

I had no reason to be nervous.

Yes he can run, and rip it into tight windows with pin point accuracy, but the difference in Rourke’s star turn against Edmonton was his demeanor and ability to process.

Credit to his coaching staff for creating a great game plan, but ultimate kudos go to the now 24-year-old star in the making for keeping a level head through an unimaginable set of stresses and circumstances to not just operate at a high level, but play FAST while doing it.