Alfieri: Worthy makes an impact with the Als 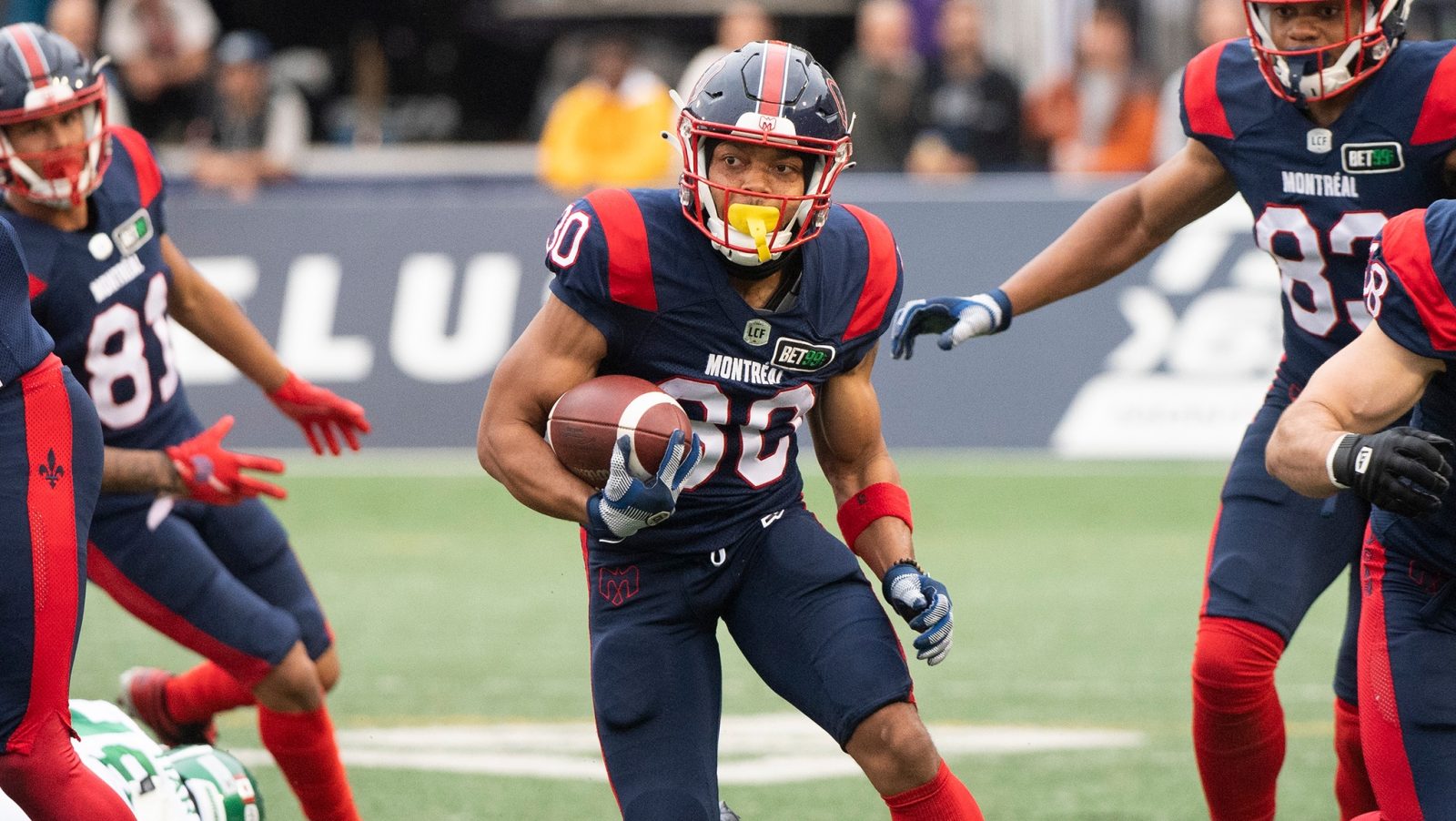 Alfieri: Worthy makes an impact with the Als

He’s had to overcome injuries on top of being cut from teams in both the NFL and CFL, but he’s always found a way to rise above it. So, when he was released by the Toronto Argonauts during training camp this year, he didn’t take it personally.

Worthy was scooped up by Montreal only hours after being let go by Toronto. The Als saw him as someone who could add more speed on special teams and on offence, and they were willing to let him compete for a job.

“When I talked to them, they said they’d give me an honest chance at playing the (kick return) position. That’s the only thing you can ask for,” added the Griffin, GA native.

“When I got here, I was still hurt because (leaving Toronto) was unexpected. I was just kind of processing each day and getting my focus back on ‘this is where I’m meant to win a championship’ because that was my intention and my goal before I left my home this year.”

RELATED
» Als trend up in this week’s Power Rankings
» Als-Riders: Buy tickets now
» Watch: Worthy leads the way in the Timber Mart plays of the week

The 28-year-old didn’t dress for the regular season opener in Calgary, but a spot on the active roster opened up for him once Mario Alford suffered an injury in that game. Worthy made his Als debut the following week against his former team. He put together a respectable performance but didn’t manage to create any big plays.

Then last week, he set the tone for the home opener at Percival Molson Stadium against the Saskatchewan Roughriders, when he returned the opening kickoff 88 yards for a touchdown.

In all, Worthy finished with over 205 combined return yards on punts and kickoffs. He won’t be able to produce those numbers every week, but he showed that he can give this group a shot in the arm when it needs it.

“It took (Saskatchewan’s) soul, man,” veteran defensive end Nick Usher said of Worthy’s touchdown. “It’s a soul-snatcher. We ate off it and we kept it up there and kept going. We got a win off it. I appreciate him! (Worthy) had a day!”

ROAD TO THE CFL

Worthy’s road to the Als wasn’t an easy one by any means. Yes, he was always fast and athletic, but like most players in the CFL, there were bumps in the road he had to deal with.

Major U.S. college football programs began recruiting Worthy when he was a teenager. Oklahoma State, Georgia, Ole Miss, Troy, Marshall, and a few other schools were pushing hard for his services. He initially committed to Oklahoma State as a defensive back.

Unfortunately, Worthy tore his hamstring during a track-and-field event. The injury kept him inactive for a year and a half.

“That was my first bout with adversity,” he said. “I had to overcome it and it challenged me to be a better a person.

“It was bad. I tore (my hamstring) pretty badly while doing a long jump.

“That’s what taught me that I could do anything in this world. At that moment, it was a challenge. That was the first adversity you get hit with and you don’t know how to deal with it. As you can tell, that was my whole life. That’s kind of when I just, in a sense, became obsessed with (football).”

Once he returned to the field, Worthy was used on offence, where he excelled immediately. He enjoyed having the ball in his hands and he was hoping to be able to do that at the NCAA level. Of all the schools that were interested, only Troy University in Alabama was willing to use him on offence. So, he settled on Troy and enjoyed a brilliant career there.

He followed up a brilliant university career with a terrific Pro Day, as he posted a 4.28-second 40-yard dash time and he posted an 11.5 in the broad jump. NFL teams took notice and he eventually signed with the Houston Texans as an undrafted free agent in 2015.

Worthy played three games for the Texans during his rookie campaign, and he performed well in practice. Despite being a nice fit in Houston, he opted to leave the organization to join the New York Jets because they were offering more money and what he felt was a better opportunity.

“When I got there, I saw that the whole roster was loaded, so I didn’t even get in to practice or pre-season,” the five-foot-eight, 175-pound returner said.

“That’s when I learned the politics (of the NFL). Sometimes you don’t get the opportunity to play. I didn’t from then (2016) until last year when I had a good season (in Toronto). It was a four-year drought where I was just working and believing and not seeing any light at the end of the tunnel.”

Worthy signed with the Argos in 2017, but he broke his ankle during a pre-game warmup that same season. The Argonauts went on to win the Grey Cup that year. It took him almost two years to recover from that injury. Again, he had to be patient.

“I disappeared for a bunch of years,” he said. “I didn’t have film, I didn’t have anything to prove myself, so I kind of got lost in the shuffle of so many people coming in. I saw a lot of people quit and give up, but someone told me that if I didn’t give up, my time would come.”

Despite being cut by the Argos early on in 2021, he was able to come back and put together a strong season. His primary contributions came on special teams, but he also had a few solid games as a receiver, including one against the Alouettes where he finished with four receptions for 85 yards and one touchdown.

“It meant a lot,” Worthy said of his ability to put it all together in 2021. “It wasn’t even about putting (film) on tape, it was more about the mindset, where I was able to start growing my belief and my confidence.

“I had it, but there’s nothing like going out there and performing and showing it. When I got out there and I got a feel for it, I knew that I belonged here and I could excel here. It gave me the drive and the belief that I could dominate.”