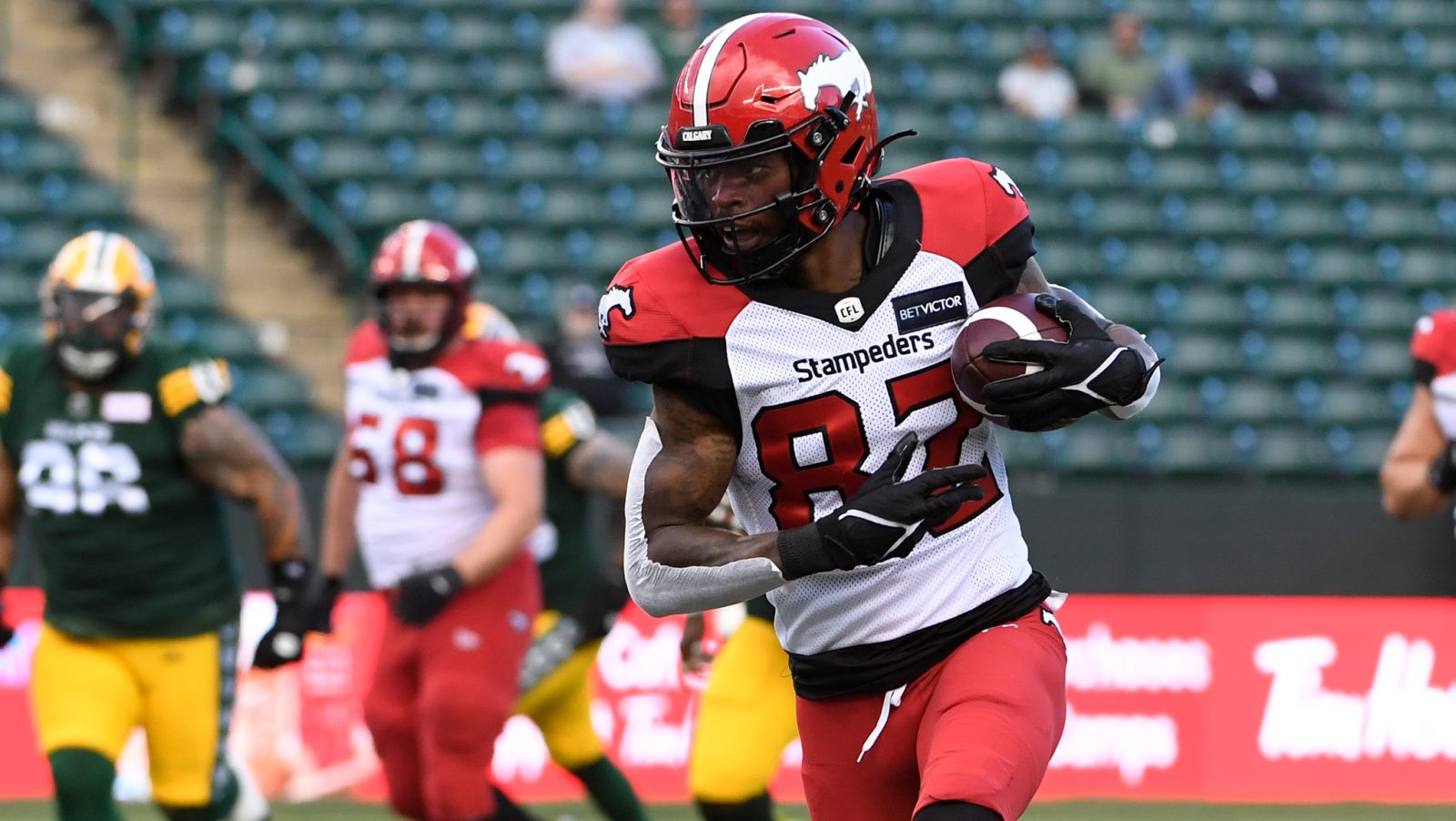 One of the underlying themes to success in CFL fantasy is the sudden plethora of low-to-mid-salaried receivers that have helped their respective teams find success in the first five weeks of the regular season.

The league’s top two leaders in receiving yardage — Calgary’s Malik Henry and BC’s Dominique Rhymes — would have cost a combined $13,368 in Week 5. For that cost, fantasy users would have had a total of 58.6 points, a huge jolt into any lineup. Add the 31.7 FP that Winnipeg’s Dalton Schoen (we told you…) and his $2,500 had, that’s nearly 90 fantasy points from your pass catchers.

Week 6 offers more value at the position in a week where it will be safe to play East Division players as Hamilton and Ottawa meet with the winner getting its first victory of the year.

Chandler Worthy has returned two of his seven kickoffs this season for majors, making him just the sixth player in league history to run back two kickoff returns in a single season. The odds are working against Worthy to pull off a three-peat, yet there’s a reason why Worthy, who leads the league in both punt and kickoff return average, is a great choice here.

Of the five returns for majors this season, two have come at the expense of the Elks, who rank eighth in opponents’ kickoff return average at 26.5 yards. Edmonton has also allowed four big plays on returns, setting the stage for Montreal’s explosive specialist to be a Worthy addition to a fantasy roster.

Where’s Kenny? Not doing so well for fantasy rosters during the past three weeks. Kenny Lawler had just 2.7 fantasy points in the Week 5 loss to Calgary, the second time in three games Edmonton’s go-to receiver was a fantasy letdown, having tallied a mere 5.1 fantasy points in a Week 3 loss to the Stampeders.

It’s not just a case of Calgary containing Lawler; almost half of his 67.2 fantasy points this season (32.9) came in the Week 2 game against the Roughriders. He will  face an Alouettes pass defence that is tops in the CFL in opponents’ average pass yardage (7.5) and ranked second in fewest passing yards allowed per game (255.8). There’s too much turbulence here to suggest running with Lawler this week.

Name a hotter receiver in the CFL than Henry. You can’t, because there isn’t one.

Henry leads the league in both yards (388) and average yards per catch (21.4) while tying Saskatchewan’s Jamal Morrow ($8,061) with 171 yards after the catch. Seven of his 18 receptions are from at least 20 yards in depth, and his 154.6 efficiency rate ranks among the league’s best.

Henry faces a Winnipeg pass defence that has allowed a league-high 12 completions of better than 30 yards along with yielding six passing majors, making this a table-made matchup for a receiver who won’t remain a value for much longer.

Running against the Elks defence produced a combined 33 fantasy points for Ka’Deem Carey in his past two games. However, this week he’ll be facing a Winnipeg defence that is allowing a paltry 66.4 yards per game and has yet to concede a rushing major this season.

There’s no question that Carey will get between 15-19 touches on Friday. However, if Winnipeg is able to dictate the pace and force the Stamps to become more pass-dependent, Carey could see a fate similar to BC’s James Butler ($10,011) last Saturday: a non-factor.

Four of Fajardo’s six passing majors have been on throws of better than 20 yards in depth. He’s also completed nine passes of more than 30 yards, four fewer than what he produced during the 2021 season.

With the presence of Duke Williams ($8,453) and Kian Schaffer-Baker ($6,205) at receiver along with Morrow in the backfield, Fajardo will have an opportunity for a big night against an Argonauts secondary that is allowing 311.7 yards per game.

Toronto has had 37 drives this season. Only three have resulted in touchdowns, giving McLeod Bethel-Thompson an 8.1% rate that ties him with Hamilton’s Dane Evans ($8,133) as the league’s lowest among starting pivots.

The Argos’ inability to find the end zone is odd considering they are third in average yards per play (5.9) and have a league-low nine two and out drives.

On the other hand, Toronto has a league-low 58 first downs and its -7 turnover ratio is second-worst. Bethel-Thompson is also lacking big plays from his receivers as they have only four completions of better than 30 yards. At the end of the day, perhaps it’s not so odd why using Argos players on your roster won’t produce much. 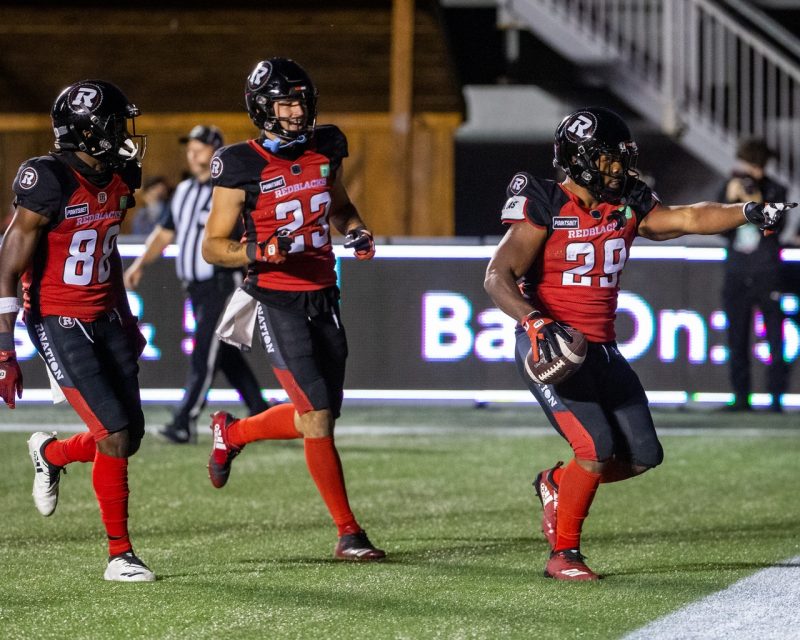 A matchup of teams in search of their first win requires finding reliability, and William Powell wins that battle easily. In his first two games of the season, Powell has rushed for 113 yards and a major on 22 carries, but has yet to become a factor in the passing game (two catches, 15 yards). Should the REDBLACKS turn to Caleb Evans ($7,000) in place of the injured Jeremiah Masoli, Powell’s value greatly increases as he will be a needed check down option for the young pivot.

Ottawa is seventh in rushing, yet could see season-best numbers on Saturday with Powell leading the way. Evans is a productive runner in the open field, and it’s not too hard to envision the duo wearing down Hamilton’s run defence to set up play-action opportunities for Evans to exploit.

Only the Elks have managed fewer offensive yards per game than the 308.8 yards averaged by the Hamilton Tiger-Cats, who lead the league in two and out drives with 26. Despite Evans leading the league with 152 pass attempts. Turnovers have been the bane of Evans’ existence during the first four games, as he’s thrown a CFL-high eight interceptions..

The Hamilton running game has averaged  59.3 yards per game which have forced the Ticats into second and long situations. The hope of running back Don Jackson ($6,414) returning from the Injured List provides a glimmer of optimism, but life has not been kind to Evans now that he is the clear cut starter in Hamilton.