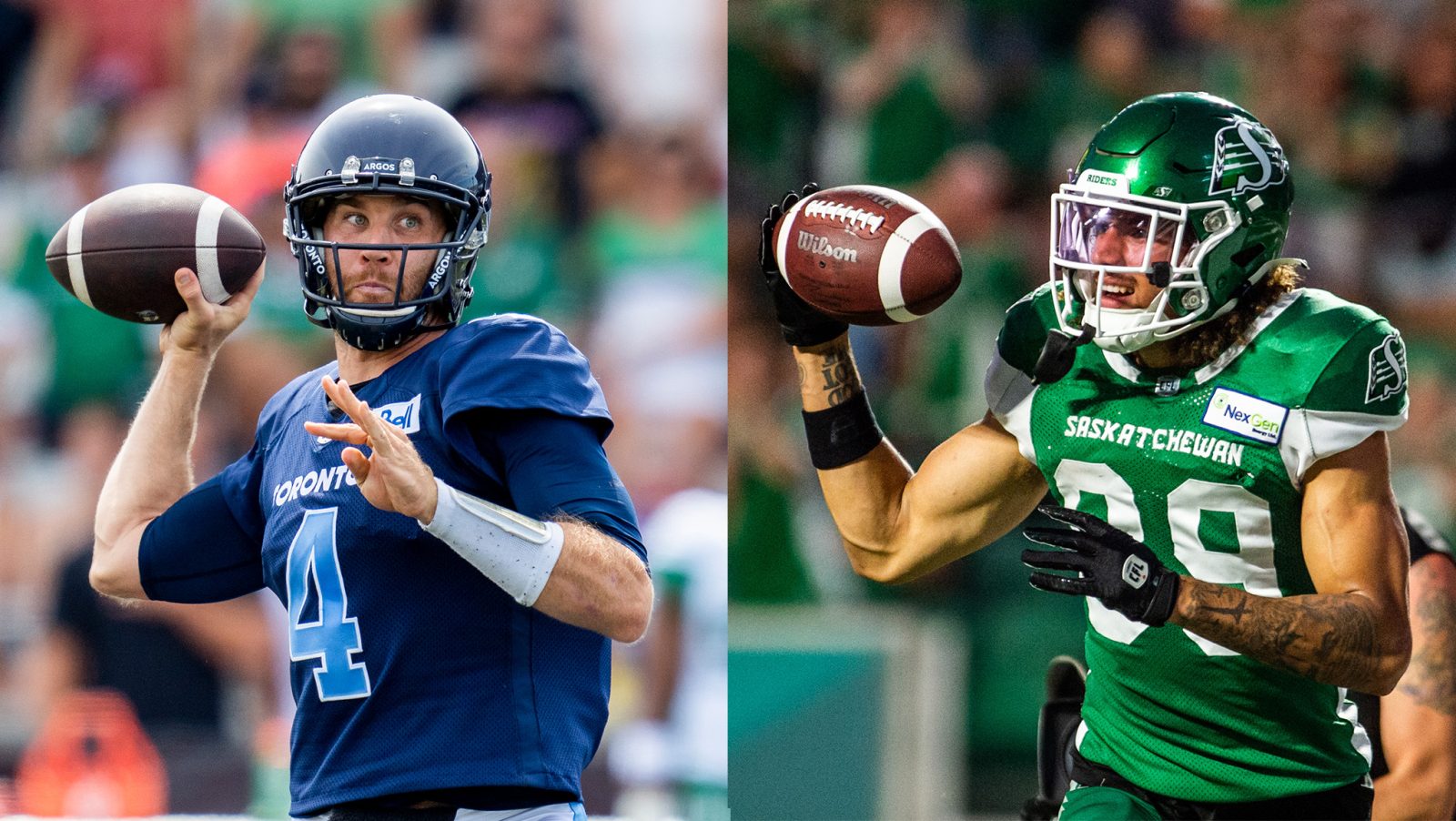 REGINA — The Saskatchewan Roughriders and Toronto Argonauts will square off Sunday evening in a rematch of last week’s Touchdown Atlantic game. The Week 6 matchup saw the game end in a 30-24 victory for Toronto, in the first-ever CFL game in Nova Scotia.

It was the defence that delivered for the Argonauts when linebacker Wynton McManis intercepted a Cody Fajardo pass late in the fourth quarter and returned it for a touchdown to seal the victory.

It was one of three interceptions for the Argos in the game, with defensive backs Royce Metchie and Shaquille Richardson recording the others.

The Argos defence also sacked Fajardo five times, limiting his time in the pocket to make plays. Defensive lineman Shawn Oakman had two sacks and is now tied for the team lead after last week’s performance.

If Oakman and the rest of the defence can continue to apply that same kind of pressure, it should allow the secondary an opportunity to make big plays.

McLeod Bethel-Thompson completed 26 passes for 276 yards and two touchdowns against Saskatchewan in Wolfville. He won the quarterback turnover battle, throwing just one interception. Limiting interceptions and turnovers will be crucial for Bethel-Thompson and the Argos if they hope to capture back-to-back wins.

Playmakers continue to emerge in the Toronto receiving game, meaning Bethel-Thompson should have ample options when putting the ball in the air this week.

If the pairing of Daniels and Phillips can continue to play well, combined with star receiver Brandon Banks and breakout Kurleigh Gittens Jr. It could make containing the Toronto pass-catchers difficult for the Riders secondary.

Running back Andrew Harris will once again be relied upon as the lead back for Toronto. His 39 yards last week brings him 75-yards short of the 10,000-yard career rushing yard milestone, which would make him the first Canadian running back to reach the mark.

According to the Saskatchewan depth chart, quarterback Cody Fajardo will be unavailable for Sunday’s game and Mason Fine is listed as a game time decision. With Fajardo out and Fine questionable, quarterbacking duties will fall on Jake Dolegala, who will be making his debut as the team’s starting quarterback in place of  for their Week 7 rematch with Toronto.

Head coach Craig Dickenson says his team is preparing for the game, no matter who will be available to start as the team’s quarterback.

“We’re going to put a team out there and we expect to play well,” Dickenson told Riderville.com. “We’re playing to win the game. We’re confident in Jake, he’s played a lot of football. He can run this offence and can move the ball.”

Saskatchewan’s leading receiver, Kian Schaffer-Baker pulled down seven catches for 96 yards this past week, and his performance on the year should go a long way in helping the young Saskatchewan quarterback.

Duke Williams had five catches for 84 yards and a touchdown, however he’ll miss this weeks matchup after being suspended for one game for his role in a pregame altercation prior to Week 6’s Touchdown Atlantic game.

Williams absence opens the door for Samuel Emilus, who saw five targets and totalled 40 yards a week ago.

With Williams out, the Riders will rely heavily on running back Jamal Morrow, who delivered 77 yards on the ground and added another 29 yards and a receiving touchdown in the game.

The unknowns that the week has brought has been tough for the team, but Morrow knows that once the game starts they have to find a way to be ready.

“It’s been up and down,” Morrow told Riderville.com. “It’s about controlling one thing at a time. We need to take a deep breath in and roll with the punches. I’m going to go in thinking I’m going get a good workload. Whatever I can do to help this team win is what I’m going to do. We have a sour taste in our mouth from last week.”

The Riders defence failed to get to Bethel-Thompson the first time around, a surprise when considering they boast a league-leading 23 sacks so far this season.

The Green and White have intercepted nine passes on the year and have been led by defensive back Nick Marshall and linebacker Derrick Moncrief, who have three interceptions each.

Marshall has been ruled out due to illness, so the likes of Mike Edem, Rolan Milligan and Jeremy Clark will need to step up in the secondary.

Both teams will be expected to be more disciplined. The Argos took 14 penalties resulting in a loss of 153 yards. On the opposite side of the field, the Riders took 11 penalties that cost them 132 yards. The game could come down to who can keep their cool under pressure.

Saskatchewan is right in the thick of the West Division race with a 4-2 record. The Argos lead the East Division for the time being and a win Sunday would keep it that way.

Kickoff for Sunday’s game is scheduled for 7:00 p.m. ET and can be seen on TSN, ESPNEWS and can followed along on CFL.ca’s Game Tracker.