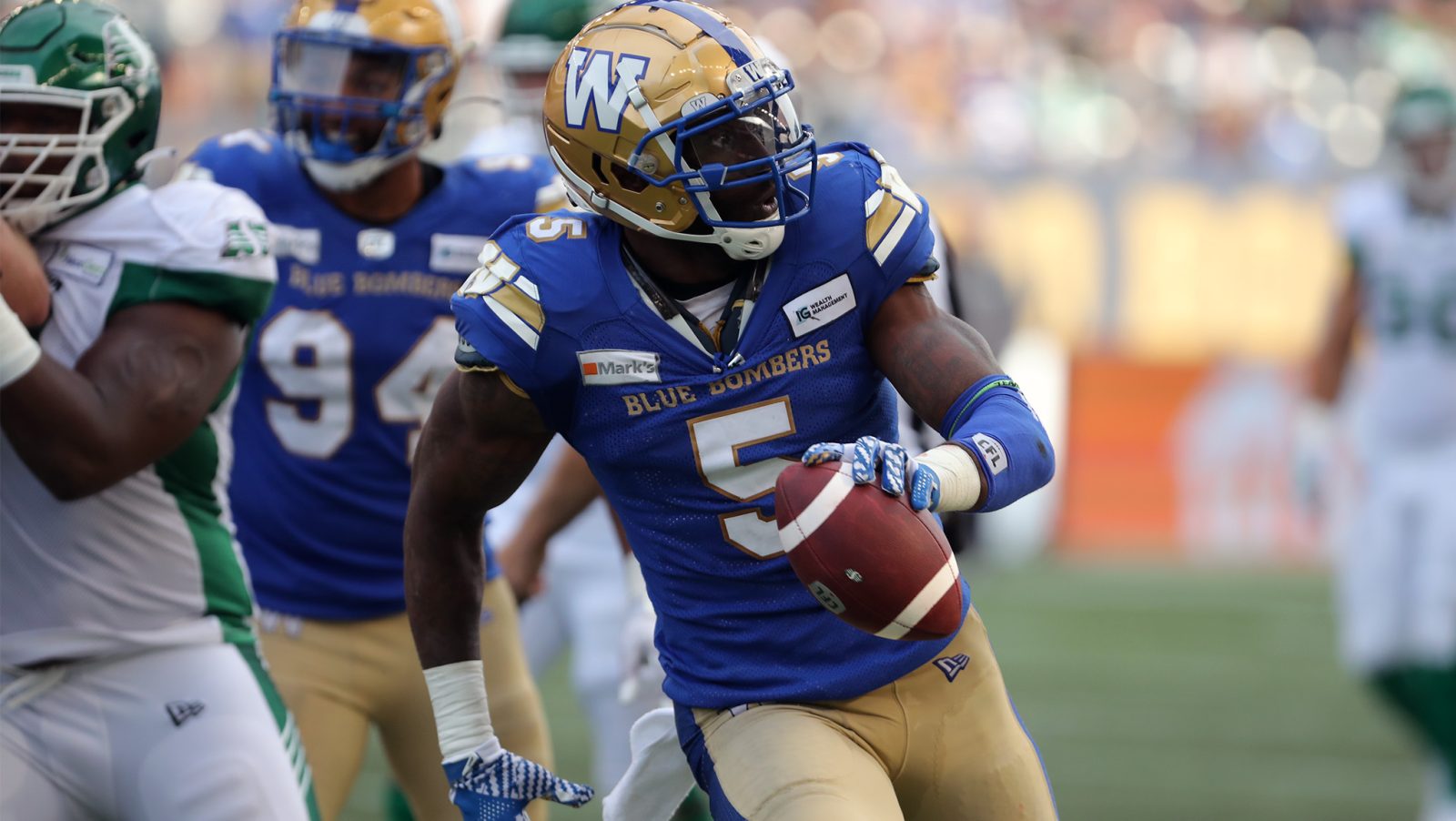 TORONTO — Fans across the league eagerly wait for OK Tire Labour Day Weekend every year, and for good reason. Every year this weekend presents some of the most exciting football of the year and each season fans are treated to intense rivalries, game winning scores, pad-rattling hits and one big reason to celebrate Canadian football.

Labour Day Weekend will kickoff with a Friday night matchup between  Ottawa REDBLACKS and the Montreal Alouettes, to get fans set for this weekend’s action, CFL.ca takes a look back at some of the most memorable Labour Day weekend games since 2000.

In one of the budding Labour Day Weekend rivalry games, the Montreal Alouettes offence exploded as they took a 51-29 win over the Ottawa REDBLACKS in the nation’s capital last season.

Running back William Stanback was the third Alouette to break 100 yards of offensive production, as he compiled 112 rushing yards on 15 carries.

Walk it off Brett Lauther

The Saskatchewan Roughriders earned a 19-17 win over the Winnipeg Blue Bombers in thrilling fashion in 2019’s Labour Day meeting between the two West Division rivals.

With the final play of the game, Saskatchewan kicker Brett Lauther converted on a 26-yard field goal attempt to propel his team to victory over the Bombers on Labour Day Weekend.

The 2018 Labour Day matchup between the Bo Levi Mitchell led Calgary Stampeders and Michael Reilly‘s Edmonton Elks might be one of the greatest displays of offence on Labour Day in recent memory.

In a game that would surpass 1,000 total yards of offence it was Edmonton who came away with the win as they took a 48-42 win over the Stampeders in the Battle of Alberta.

Edmonton’s Reilly threw for 397 yards and three touchdowns in the win, while his counterpart in Mitchell threw for an eye-popping 491 yards and four touchdowns.

Reggie Begelton was the leading receiver for Mitchell, pulling in 153 receiving yards on seven receptions. Duke Williams was the main target for Reilly in their win, the now Saskatchewan Roughrider caught seven passes for 172 yards and a touchdown.

Walk off in Winnipeg

The 2016 meeting between the Blue Bombers and the Roughriders, was a game that ended in dramatic fashion.

After assuming a 19-3 lead early in the third quarter, Winnipeg surrendered 22 second half points as the Riders tied the game on a Kendial Lawrence punt return touchdown with just over a minute remaining in the game.

With no time left on the clock, Blue Bombers kicker Justin Medlock delivered a 43-yard field goal make to lift his team to victory, giving Winnipeg their first Labour Day weekend win in Regina since 2004, at the time.

The 2016 Labour Day Classic between the Hamilton Tiger-Cats and the Toronto Argonauts was exactly that, a classic, in every sense of the word.

Led by Zach Collaros, the Ticats surged to a 32-point second half, to triumph in a 49-36 win over the provincial rivals. The 85 combined points scored between the two teams noted the highest scoring Labour Day game in history between Toronto and Hamilton to that point.

With Ricky Ray quarterbacking the Argos at the time, offence in abundance was to be expected as the two quarterbacks combined for 744 passing yards and seven touchdowns in the game. Collaros threw for 359 yards and four touchdowns, while Ray threw for 386 yards and three touchdowns. 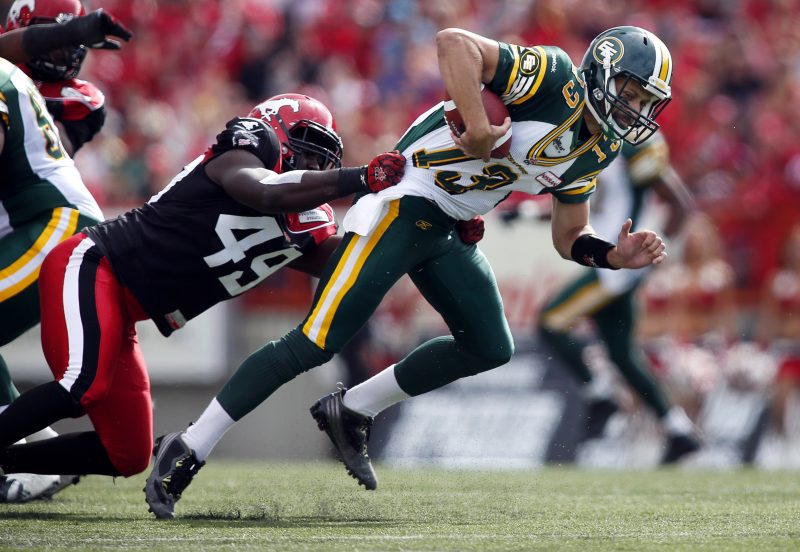 2013 was Edmonton Elks’ quarterback Michael Reilly‘s first season surpassing 1,000 passing yards. He would finish the year with 4,207 (The Canadian Press).

In an early edition of the Michael Reilly versus Bo Levi Mitchell matchups, 2013’s game nearly saw a comeback of epic proportions as the Stampeders took a 37-34 victory over Edmonton.

Reilly threw for 246 yards and four touchdowns in the game, adding another 58 yards with his legs. Down 30-7 entering the fourth quarter, Reilly led the Green and Gold offence by throwing all four of his touchdown passes in the final frame en route to a 27-point fourth quarter.

However when their team needed it most, the Stamps forced an incompletion on third down with 20 seconds remaining to stifle a near magnificent Reilly comeback win. 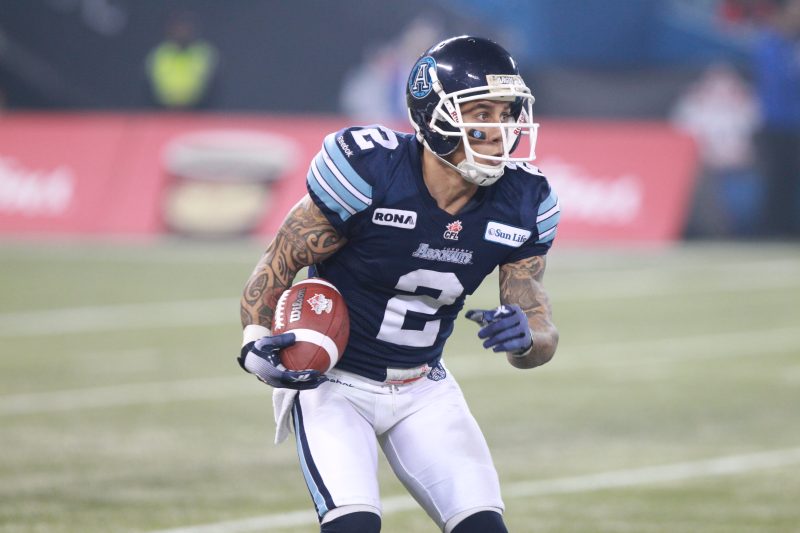 In what is seeming to form a bit of a Labour Day Weekend trend, the Argonauts claimed a 33-30 victory over the Tabbies in 2012, as Swayze Waters connected on a 34-yard field goal with 29 second remaining in the game to help deliver a Boatmen win.

Quarterbacking the Argos was Ricky Ray, who completed 32 of his 45 passing attempts for 375 yards and a touchdown pass in the performance. Despite the impressive numbers from Ray and the game-winner from Waters, it was Argos receiver Chad Owens who stole the show.

Owens saw a team-high 15 targets in the contest and reeled in 11 passes for 176 yards and touchdown. Owens also added 90 punt return yards and 136 kick return yards, pushing him over 400 all-purpose yards in the Argonauts’ 2012 win. 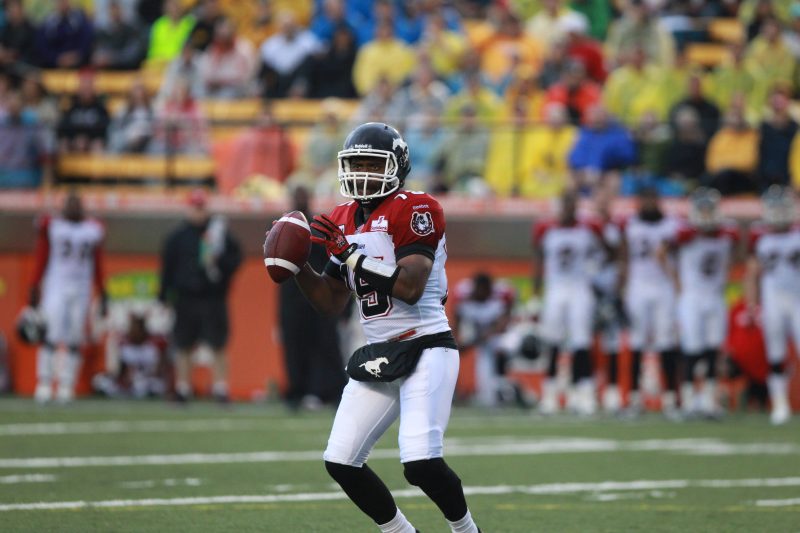 Calgary Stampeders quarterback Kevin Glenn‘s completion percentage of 66.7 in 2012 was second in the league, behind only Ricky Ray (Dave Chidley/CFL.ca).

The 2012 Labour Day weekend was filled with plenty of action, on the very same day that Toronto’s Chad Owens was domination in Ontario, Calgary Stampeders quarterback Kevin Glenn was putting together an impressive performance of his own.

Glenn completed 23 of his 30 passing attempts for 273 yards and two touchdown passes as he helped Calgary to a 31-30 win over Edmonton, but it was the play of Glenn during the fourth quarter that is perhaps most memorable.

With just over two and half minutes of game clock left, Glenn engineered a five-play scoring drive to help lift his team over the Double E. Glenn completed three consecutive passes, headlined by a 29-yard completion Marquay McDaniel, before finding Larry Taylor in the end zone on a seven yard strike, delivering the game-winning touchdown. 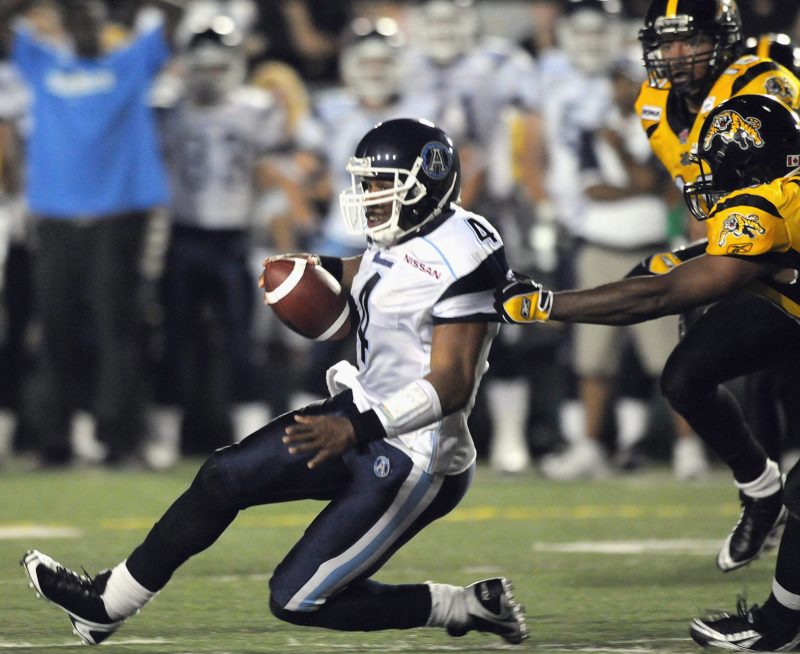 Despite outscoring the Argonauts in the second half of the game, the Ticats couldn’t overcome Kerry Joseph and the Boatmen as they fell 34-31 on Labour Day in 2008.

It wasn’t a perfect display of passing from Joseph, but it was a gritty performance nonetheless, as the Toronto quarterback completed 18 of his 33 passing attempts for 399 yards and a touchdown in the game. Joseph was also the leading rusher in the game for the Argos, averaging 8.2 yards per carry, rushing for 49 yards.

Despite the play from Joseph, it was running back Bryan Crawford who would deliver the game-winning score for Toronto and help them earn a Labour Day victory. With his only rushing attempt of the game, Crawford plunged forward on the goal line for the score, capping of a 79-yard scoring drive and giving Toronto a 34-26 lead late in the game. 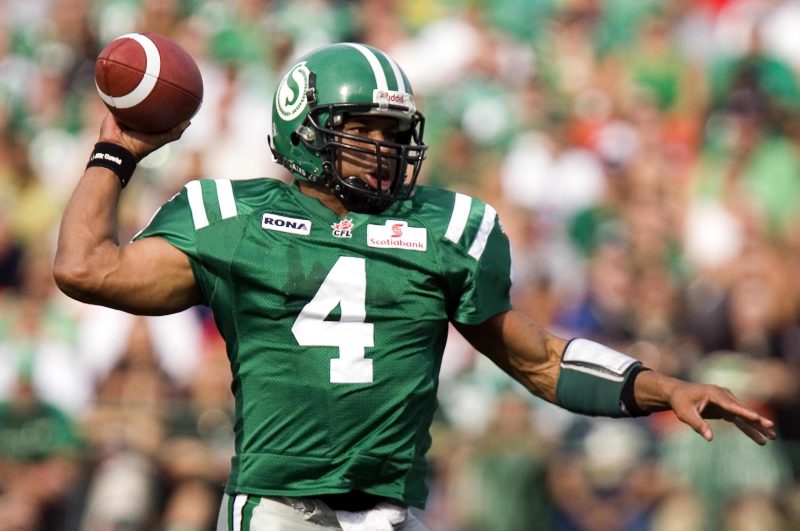 In 2007, Kerry Joseph threw 24 touchdown passes for the Saskatchewan Roughriders and had an interception percentage of just 1.7, the lowest in the league (The Canadian Press).

It should be a surprise to almost nobody that Kerry Joseph is apart of one of the most electrifying Labour Day game finishes of recent memory.

In a 2007 matchup with Kevin Glenn and the Winnipeg Blue Bombers, Joseph led the Roughriders to a 31-26 win over the division rivals, as he danced his way into the end zone on a 27-yard touchdown scramble with 12 seconds left on the clock.

Joseph would finish the game completing 20 of his 32 passing attempts, throwing for 348 yards and two touchdowns. The Rider pivot also led his team in rushing with 74 yards on nine carries, including his game-winning 27-yard score.

Winnipeg’s Glenn put together an equally impressive performance in the Labour Day game against Saskatchewan, completing 75 per cent of his 36 attempts for 393 yards and three touchdown passes.

That battle between the division rivals ultimately ended in Saskatchewan’s favor, but no matter who you cheer for, there is no denying that it was one of the most exciting Labour Day Weekend endings since 2000. 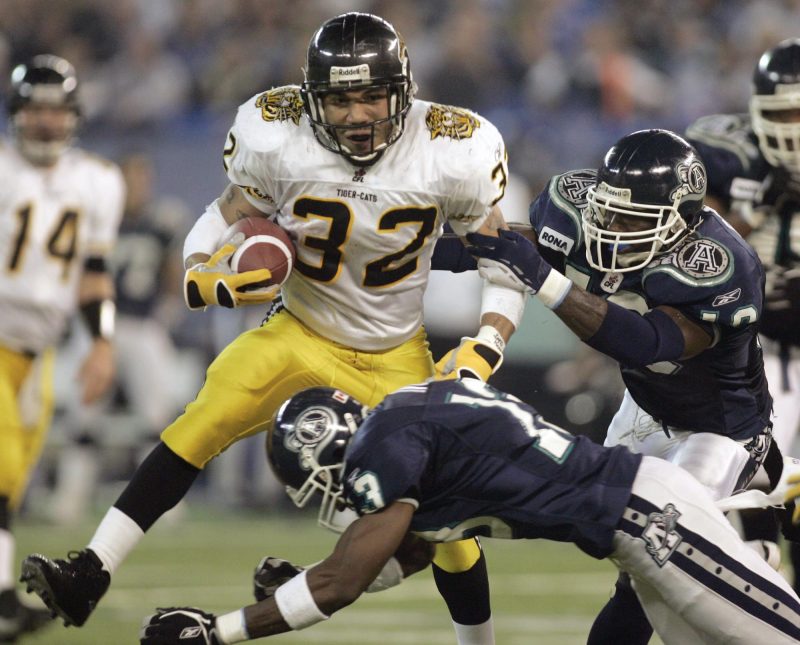 In 2004, Hamilton Tiger-Cats’ running back Troy Davis led the league with 1,627 rushing yards and 10 touchdowns (The Canadian Press).

The 2004 Labour Day Weekend matchup between the Argonauts and the Ticats notes the first and only time that a Labour Day game between the two team’s has ended in a tie, as the game ended 30-30 between the provincial rivals.

The final quarter of action ended with the teams knotted in a 20-20 deadlock, sending the game to overtime. Both team’s managed to score 10 points in the extra frame of action, as the final buzzer sounded the game ultimately ended in a 30-point draw.

The matchup was a run-dominant ball-game, as the teams combined for over 450 yards on the ground. Quarterback Michael Bishop was the leading rusher for the Argo’s carrying the ball 20 times for 76 yards and two scores. John Avery made the most impact for Toronto as he rushed for 119 yards and a touchdown on 18 attempts.

On the Hamilton sideline ball-carrying duties were given almost exclusively to Troy Davis who rushed for 32 of the Ticats 33 attempts. Davis managed 233 yards and two touchdowns out of the backfield, while rushing for an average of 7.3 yards per carry.