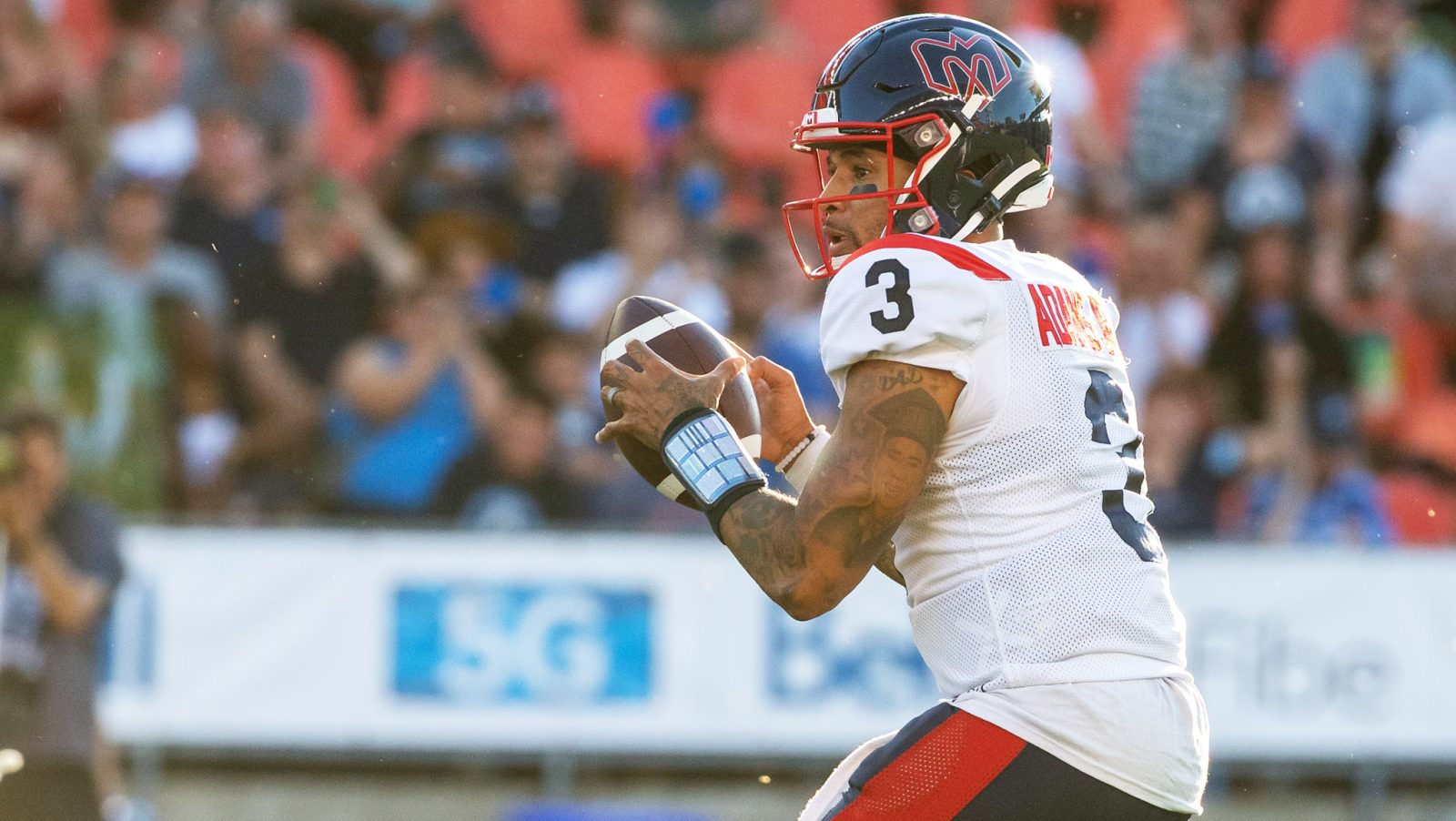 VANCOUVER — The BC Lions have acquired American quarterback Vernon Adams Jr. from the Montreal Alouettes. In exchange, Montreal will receive the Lions’ first-round selection in the 2023 CFL Draft.

“Getting a player of Vernon’s calibre provides a big boost to our offence as we continue pushing for a return to the playoffs,” said Lions co-general manager/director of football operations Neil McEvoy.

“Vernon came to see me in the last few weeks because he wanted to play. I kept him informed of the situation by promising to do everything to accommodate him,” Alouettes’ GM Danny Maciocia said.

“Vernon is pleased with the outcome and we thank him for his work over the past few years. We wish him all the best for the future.”

Along with recording a total of 505 completions for 6,988 passing yards and 43 touchdown strikes, the native of Pasadena, CA has rushed for 978 yards and 20 touchdowns on 203 total carries.

His most productive season came in 2019 when he earned a CFL All-Star nod after passing for 3,942 yards and 24 touchdowns while tying William Powell and Chris Streveler with a CFL-best 12 rushing touchdowns. In the process, Adams Jr. led the Alouettes to second place in the East Division and their first playoff appearance since the 2014 campaign.

Adams Jr. was originally on the Lions’ negotiation list before being dealt to Montreal in May 2016 for a first-round selection in the 2017 CFL Draft (WR Danny Vandervoort, third overall).

The quarterback attended Eastern Washington University for four seasons (2011-2014). After redshirting in his first year and splitting the starting duties in 2012, Adams Jr. was twice named Big Sky Offensive Player of the Year while also earning First-Team Big Sky honours in both 2013 and 2014.

He transferred to Oregon for the 2015 season and was named Pac-12 newcomer of the year after throwing for 2,643 and 26 touchdowns while leading the Ducks to an appearance in the Alamo Bowl where they fell to Texas Christian in triple overtime.

Hearing that there is a strong possibility that @BCLions will acquire @BIGPLAYVA3 from @MTLAlouettes. Could be done by Wed. I’ve heard a 1st round pick is the likely return. VA’s elbow is completely healthy & BC is close to his home in Tacoma. @CFLonTSN @TSN_Sports pic.twitter.com/ggecOKJSM1

Adams Jr. began the season as the Alouettes starting pivot but was pulled in their Week 2 contest against the Toronto Argonauts in favour of Trevor Harris. In the three games Adams Jr. has seen action in, he’s completed 21 of 39 passes for 294 yards, a touchdown and two interceptions.

The Lions lost their starting quarterback, Nathan Rourke, two weeks ago when he suffered a Lisfranc sprain in his right foot against the Saskatchewan Roughriders. The 24-year-old from Victoria, BC, had put together a dominant season in his first year as the team’s starter.

Michael O’Connor took over for Rourke in Week 11’s contest and completed all five of his passing attempts for 36 yards. He was then named BC’s starter in Week 12, but did exit the contest with an apparent lower body injury. Before his exit, the six-foot-five, 223-pound pivot completed six of 15 passes for 94 yards. Antonio Pipkin then saw action in that game, connecting on nine of 17 passes for 112 yards and a touchdown while also calling his own number six times for 26 yards.

BC returns from its bye next week, with the Lions taking on the Montreal Alouettes at Percival Molson Stadium.