Look Who’s Back: Inside Harris’ incredible return the field

Look Who’s Back: Inside Harris’ incredible return the field

That was a line in the caption of an Instagram post that Andrew Harris shared on August 17, closing the book on his first season in Toronto, one that was cut short by a torn pectoral muscle that required surgery.

But remarkably, that ending of Harris’ story has been ripped out, and a new one is ready to be written as the 35-year-old is set to make his return in this weekend’s Eastern Final.

The healing process for the injury he sustained is usually about six months. Harris was back in three.

“I was kind of worried if I was gonna get cleared by the doctor,” Harris said following Thursday’s practice. “But I kind of said, you know what, if I don’t get cleared, I don’t know what’s next so I might just rock it to the wheels fall off anyways.

“I’m feeling strong and feeling great, but it was a long process of trial and error and just seeing how things are gonna go.”

That long process started two weeks after his surgery, when Harris had a Platelet-rich plasma (PRP) injection. The procedure takes the patient’s own blood, uses a machine to separate the platelet-rich plasma, and then injects it back into the affected area.

After that injection, Harris said he noticed an immediate change in his body. He felt stronger every week and started getting his range of motion back. And when the three-week mark hit and he was out of a sling, Harris said that’s when he knew he was going to try his hardest to get back on the field this year.

“I was like, you know, I got nothing to lose,” said Harris. “I’m here every day anyways, might as well work out, grind it out and I just had that possibility (to come back). And I think honestly, just the hunger to get back to the (Grey) Cup, the way the team was going and everything. Just being in this locker room and the vibe here really got me motivated to put my best foot forward to get this done.”

That grind and drive to heal after an injury like this is nothing new for Harris. This was the second time in his career that he’s had to do so.

Back in 2011 when he was with the BC Lions, the running back tore his pec (the opposite side of this year’s injury) while he was bench pressing in the gym. He was injured in March and made it back in time for training camp that season. He couldn’t exactly remember what kind of treatments he underwent back then, it was 11 years ago after all, but what never left him was the hard work he knew he needed to put in to return.

In the months that Harris was on the sideline this year, he decided to stay in Toronto instead of going home to Winnipeg to rehab. That decision that was based on Harris’ selflessness, putting his team’s needs ahead of his own.

He was on the sideline at every game, through the wins and the losses, talking to not only the running backs but the rest of the team as well. He made sure he was contributing as much as he could, even if it wasn’t on the field with the ball in his hands, as the Argos would go on to win 11 games in the regular season and lock up first place in the East Division.

“I’ve been in this league for over 12 years,” Harris said. “And I wanted to continue to pass on that wisdom and be an extra set of eyes for the coaches and also get associated with all my teammates and build the great bond we have going into these playoffs.

“At the end of the day, the calls are the calls, the plays are the plays, but it’s all about the brotherhood and the guys in the locker room. You have to count on those guys more than anything in the playoffs. Anything can happen and if you have that trust and that faith in the guy beside you, that’s what wins championships.” 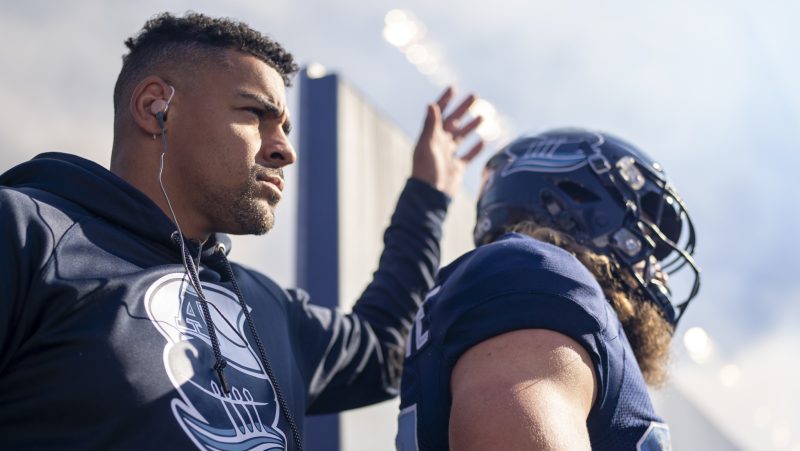 Andrew Harris will be returning to the field this weekend against the Montreal Alouettes in the Eastern Final (Kevin Sousa/CFL.ca)

While Harris was not in the lineup, the bulk of the carries in the backfield were given to A.J. Ouellette.

Harris and Ouellette became fast friends after meeting in training camp. When the regular season started, Harris said he trusted Ouellette to be his “second set of eyes” on the sidelines, noting it was nice to have someone to quickly talk to in-game since the team’s running backs coach, Edwin Harrison, was upstairs in the booth.

Then when Ouellette was starting, Harris returned the favour and was that vision for him. He’d also offer to watch film with Ouellette and pass along any notes he could.

And that bond carried off the field as well; Ouellette was the one who organized a care package for Harris after his surgery from the team.

“A.J.’s work ethic is insane. This guy is an absolute monster in the gym,” said Harris, who couldn’t help but gush about his teammate. “He understands the playbook, he’s a student of the game. I can really appreciate that, get behind someone like that, and want to be around someone like that because I pride myself in being very, very similar in a lot of ways. It was an easy bond and friendship.”

If Harris coming back from injury before a post-season bout sounds familiar, well, that’s because it’s happened before. Just flip the calendar back a year and you’ll find reports of Harris’ status up in the air ahead of the Western Final.

He knew, he laughed, that he would be playing in that game at IG Field last year, even if no one else did leading up to the moments before kickoff. That night the five-foot-10, 216-pounder would finish the game with 23 carries for 136 yards and a touchdown, helping Winnipeg get to their second-straight Grey Cup.

“I get a different gear in the playoffs,” said Harris, who’s looking for his third-straight appearance in the championship game. “My resume speaks for itself since I’ve been in the league, so there’s definitely a different fire. I get amped up and excited for these kinds of games.”

Toronto can only hope that Harris will turn that gear on full blast in Sunday’s Eastern Final, as they welcome the Montreal Alouettes to BMO Field.

Establishing the run, whether it’s Harris or Ouellette carrying the rock, will be important for Toronto, especially after the Alouettes were able to hold Hamilton to just 37 yards on the ground in last weekend’s Eastern Semi-Final.

“They’re going to make their plays, too,” said Harris, after mentioning he and the Argos were focussing on themselves and what they need to do in the contest in the week leading up to the big game.

“They get paid and they’re here for a reason. I’m looking forward to a great battle and I’m very excited about it.”