3 storylines to watch in the Eastern Final

3 storylines to watch in the Eastern Final

It’s been a while since the Montreal Alouettes and Toronto Argonauts have met in the Eastern Final. In fact, it’s been a decade.

2012 was the last time these two clubs battled for a trip to the Grey Cup, when Toronto travelled to Montreal and won 27-20. And now they’re set to battle once again on Sunday at BMO Field.

After losing in the Eastern Final last year, there’s no doubt that McLeod Bethel-Thompson and co. will be hoping to steer the ship in the right direction with a win in front of their home crowd this time around. Montreal will be looking to grab a road victory in order to punch their ticket to the Grey Cup, as Trevor Harris and his team are fresh off a win at home last week in the Eastern Semi-Final.

2022 CFL PLAYOFFS
» 109th Grey Cup Divisional clashes set
» Als’ defence plays pivotal role in Semi-Final win
» Head To Head: Who has the edge in the Eastern Final?
» Make your Eastern and Western Finals picks and you could win $1,000 cash

Toronto won the season series against the Alouettes, taking two of the three meetings. The first was a 20-19 win in Week 2 at BMO Field. With less than 20 seconds left on the clock, and the Als down by two, David Cote missed his field goal attempt for the single and the Argos walked away victorious.

Week 20’s matchup between these two was one with major playoff implications and a whole lot of drama. The Argos needed a win to clinch the East. The Als needed a win to keep their hopes alive of moving to the top spot. In true CFL fashion, the game ended on a rouge, as Boris Bede missed a 47-yard field goal attempt with no time left on the clock. The returner for Montreal stepped out of bounds at the back of the end zone when he caught the ball, meaning he couldn’t run, or kick, it out of the end zone. 24-23 win for Toronto.

Their final game was in Week 21 and with the playoff seeding locked up, both teams took the opportunity to rest a few of their key starters in the contest. Montreal won that one 38-33.

With a trip to the Grey Cup on the line, here are three storylines to follow in the Eastern Final. 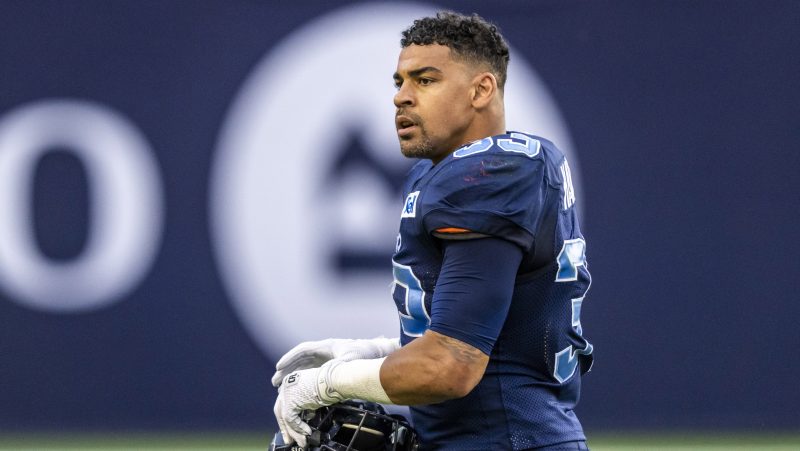 Andrew Harris returned to practice last week after recovering from a injury to his pectoral muscle (Kevin Sousa/CFL.ca)

It’s the time of the year where a team’s ground game becomes more important than ever, and for the Argos, it’s the perfect time to get their star running back Andrew Harris back on the field.

This isn’t a knock against A.J. Ouellette. Not at all. Ouelette has been a playmaker for Argos in the 13 games he’s suited up in, rushing for 516 yards on 98 carries and two touchdown, averaging 5.27 yards per carry. He’s also gotten involved in the aerial attack out of the backfield, hauling in 38 of the 46 passes thrown his way for 350 yards, 293 of those yards after the catch, and a touchdown.

But a veteran with plenty of playoff experience, and a few Grey Cup rings, is sure to be welcomed back with open arms.

Just look back to last year if you want to know how Harris performs in high-pressure, winner-takes-all games. Right up to kickoff of the Western Final, it was unclear if Harris would even play as he had been sidelined with an injury. But he did hit the field at IG Field that day, rushing for 136 yards and a major score on 23 carries in the Bombers’ win over the Riders.

Who knows if history will repeat itself with a big performance from the first-year Argo on Sunday, but with Harris and Ouellette in the backfield, Toronto has some great options to run the rock. 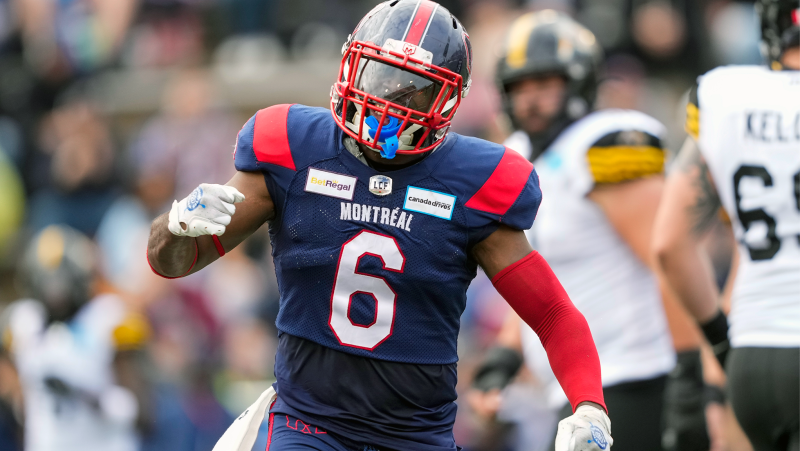 Adarius Pickett and the Als defence will be hoping to repeat their performance in the Eastern Semi-Final on Sunday at BMO Field (Kevin Sousa/CFL.ca)

All season long, Corey Mace’s group in Toronto has made big plays in key moments, helping the team to 11 wins.

The Argos finished the regular season with 48 turnovers forced, good for the league-lead. Jamal Peters led the way in the secondary, topping the CFL in interceptions (six), one of which he returned for a touchdown. Henoc Muamba and Wynton McManis were the anchors of the middle of the defence. Muamba finished with three sacks, two interceptions and 75 tackles, and before an injury put him on the sideline, McManis was leading the league in defensive plays. Plus, don’t forget about how hot defensive end Ja’Gared Davis has been in the final stretch of the season, with five of his seven sacks coming post-Labour Day Weekend.

But how about that Alouettes defence? They, too, have come up with important stops and big games this year.

In the Eastern Semi-Final, the Alouettes defence recorded six sacks and held the Ticats offence is check for the majority of the contest. Tyrice Beverette was major contributor on defence for the Als in the win, tallying three tackles, two sacks, and forcing two fumbles. Mike Jones also came up with a crucial play for his team with an interception late in the fourth quarter, his second of the game.

Those two aren’t the only ones who has been making plays for Montreal throughout the year. Wes Sutton led the team in tackles with 79 to go along with his four sacks, one interception and two forced fumbles. Adarius Pickett also had an excellent season in Montreal, tallying 73 tackles, four sacks, a pick-six and a pair of forced fumbles.

COULD IT COME DOWN TO THE KICKERS? 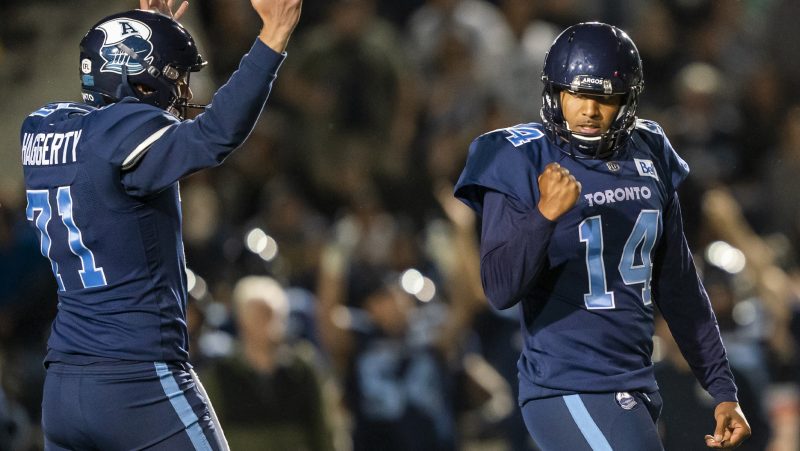 Could Boris Bede be the deciding factor for the Argos on Sunday? (Kevin Sousa/CFL.ca)

In the pair of games that had implications in the standings between these two teams, it all came down to the kickers. Both contests were decided by missed field goals, one from David Cote and the other from Boris Bede, and both went in the Argonauts favour.

Cote made two of the three field goal attempts in the Eastern Semi-Final last weekend, and one can only assume that his miss at BMO Field in Week 2 will be on his mind when he returns to the scene of the crime this Sunday.

Cote finished the season third amongst kickers in field goal percentage (86.3), his longest from 52-yards out. He was also good on 36 of his 37 convert attempts. Bede was just behind Cote in field goal attempt percentage, connecting on 43 of his 55 tries (78.2%). Bede’s longest attempt was from 56-yards, one of three he connected on from 50+.

Who knows how Sunday’s matchup will play out but if the regular season meetings are any indication of what’s to come, it might come down to the foot of Cote or Bede.