While I love putting together target charts for every CFL game, I know as well as anyone that each throw has anywhere from 20 to 40 details that a single dot cannot express. Target charts are a crude summation of the stories quarterbacks weave throughout a CFL game. This is always true in the Grey Cup, more specifically the 109th Grey Cup as every snap offered bits of information to the keen observer.

With that in mind, it’s time for the final quarterback target charts of the 2022 CFL season. It’s a recap of a quarterback matchup that while statistically unspectacular will be remembered for a long, long time. 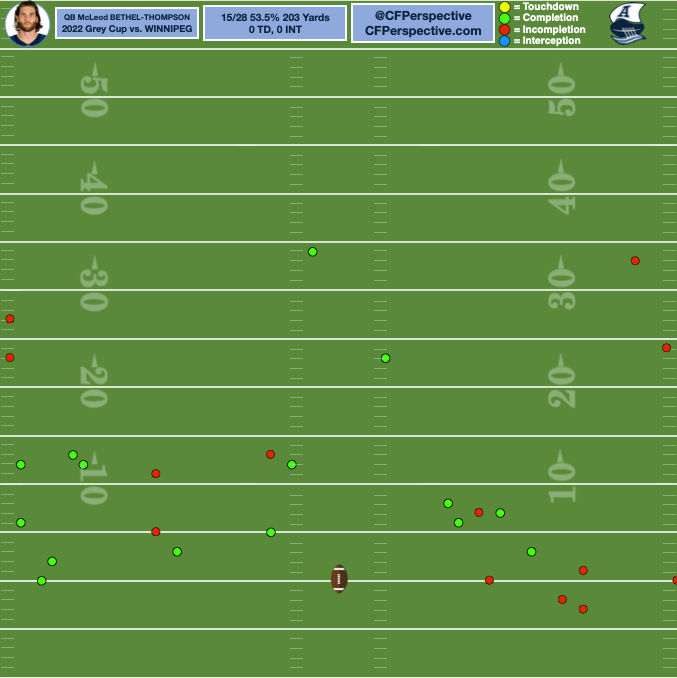 While backup quarterback Chad Kelly got much of the media attention postgame and carried the Grey Cup out for the Toronto Argonauts championship celebration in Toronto Thursday. McLeod Bethel-Thompson who nearly played from start to finish deserves the shine here.

The injury to his right hand was unfortunate, and Kelly made the throws needed while producing an unimaginable run that was far more impressive than any of his completions. But Bethel-Thompson’s willingness to stand in and get absolutely blasted by the Winnipeg Blue Bombers pass-rush in this Grey Cup was special.

None of these little dots will show you the force absorbed on at least five to 10 throws by Bethel-Thompson as he remained calm in the pocket and looked to deliver downfield. 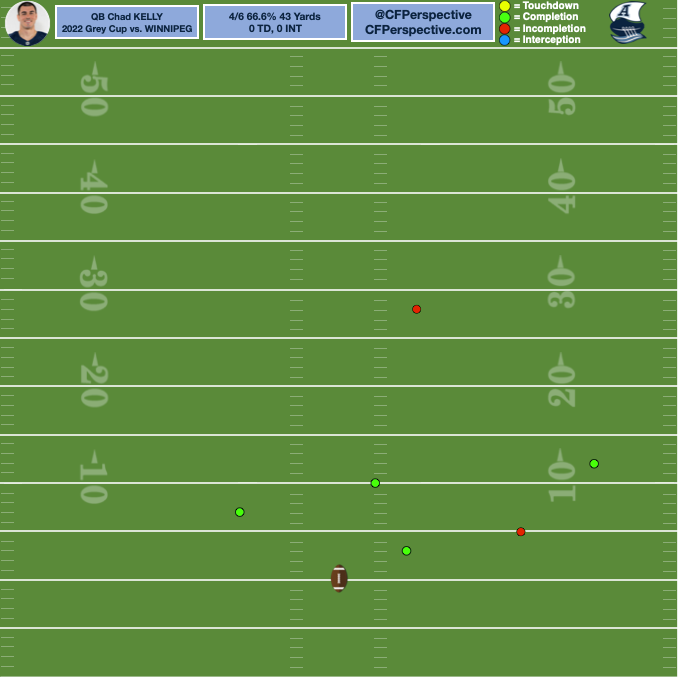 The hero of the moment, universally adopted for his unique energy and quick adaptation to the CFL game.

One of Kelly’s two incompletions came via a tip at the line of scrimmage on a ball that if untouched might have been intercepted. On the same snap Kelly missed a corner route that could have absolutely opened the floodgates to his star turn.

I know there is much discussion about the future of Argonauts quarterbacking, but if we strictly view this performance in the present there is one moment rising above the rest which has nothing to do with a throw.

With 5:49 left in the fourth quarter on second-and-15, Kelly looked to his right, felt the rush, escaped pressure, pumped to his left to throw Bombers linebacker Adam Bighill for a loop and face planted into Desmond Lawrence before popping up, staring down the sideline and asking for the next call after gaining a first down with his feet.

Twenty yards of mayhem, chaos and pure energy. Kelly took off past the line of scrimmage it was as if a lightning bolt struck Mosaic Stadium Sunday, one that shot through the heart of Bombers fans three plays later when running back AJ Ouellette would crash into the end zone to help overtake the lead. 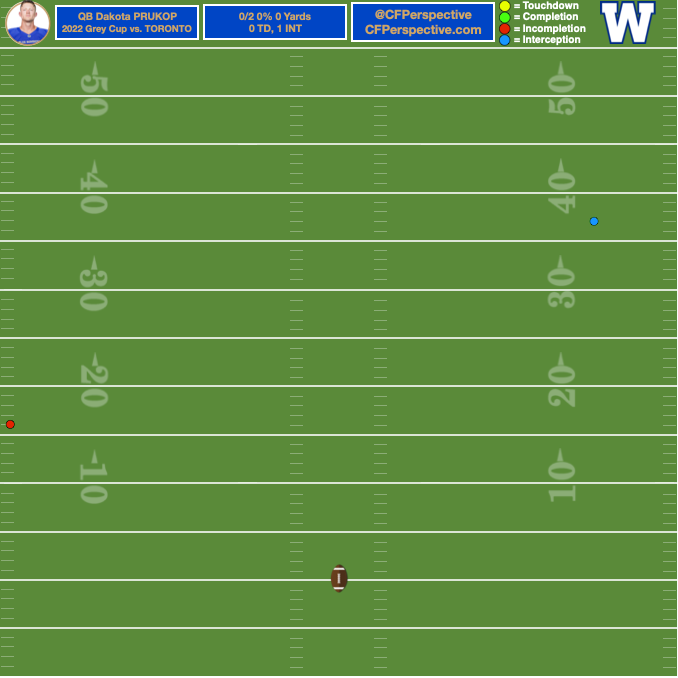 As a backup quarterback your job is to affect the game productively while minimizing any negative outcomes the starter will have to atone for. This was a tough game for Dakota Prukop, there’s no other way to put it.

In seven snaps Prukop had two sneaks, three called runs and a pair of pass attempts as offensive coordinator Buck Pierce appeared to be using the Bombers backup to give Zach Collaros intermittent rest.

The first attempt came on a new wrinkle to an old Bombers staple, with Prukop keeping the ball through a myriad of backfield fakes before throwing a sideline comeback route that fell incomplete. The real damage was done with 11:50 remaining in the fourth quarter when Prukop took a snap, faked the jet sweep to Nic Demski before rolling to his right. With a flat route negated by an Argos defender Prukop looked to the next level, Dalton Schoen was open briefly then Prukop progressed yet deeper to Rasheed Bailey, but threw into coverage as Shaquille Richardson made the acrobatic catch for an Argos interception.

While the ensuing possession led to the Argos field goal attempt being blocked, the Prukop interception certainly felt like a strange play call that gave credence to Toronto’s chances down the stretch. The back-to-back reigning Most Outstanding Player was taken off the field while Prukop took just his third snap of the year on first-and-10 in a game Collaros started, the first called passing play for Prukop all year in that down and distance. 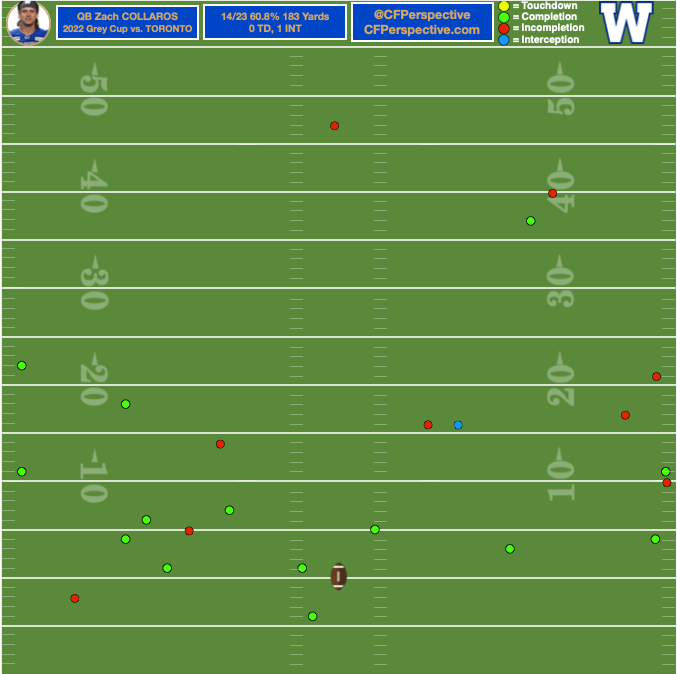 The big question entering the game was how Collaros’ ankle would fair after being rolled up on a week earlier in the Western Final against the BC Lions. I thought his movement looked relatively unaffected, but the limited downfield passing game, expanded Prukop usage and immobility on sacks taken showed me that Collaros was affected.

The leagues best player this season short armed a few throws here and there including vertical shots to Dalton Schoen early on, but he did produce some classic Collaros improvisational moments. My lasting memory of Collaros’ 109th Grey Cup will always be the look of frustration on his face seconds after his final pass attempt was knocked down at the line of scrimmage by Toronto linebacker Chris Edwards.

The field goal unit came on for third down, and we know what happened from there. No quarterback wants to leave the field, after the season Collaros had and the history that was at stake on Sunday night in Regina. The finality of leaving the field felt much heavier than the usual failed drive, even with the winning kick still a possibility.