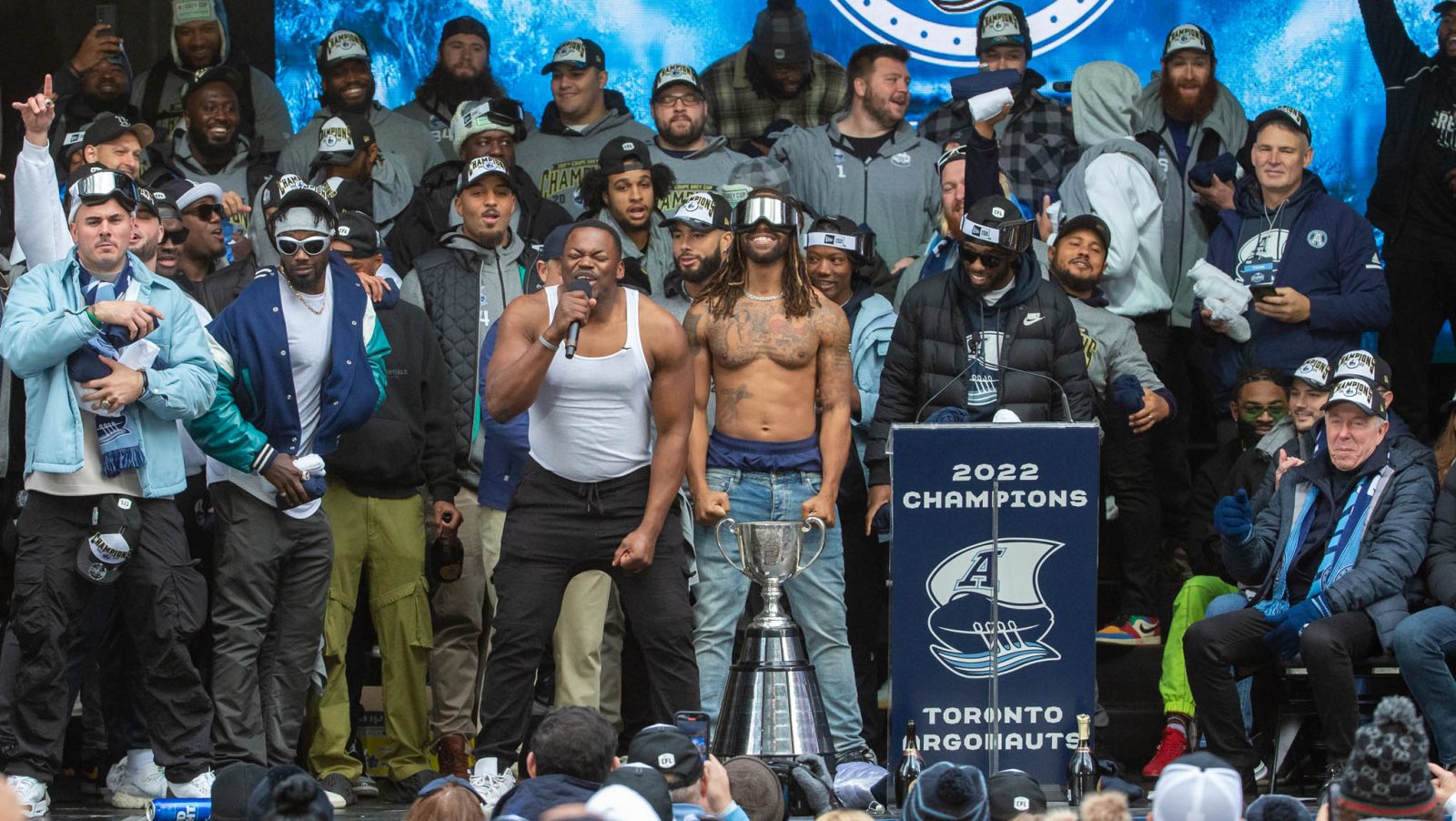 The confetti cannons fired, an appreciative crowd roared and those sitting closest to the stage at Maple Leaf Square on Thursday got a champagne shower, courtesy of the 2022 Grey Cup champs.

The Toronto Argonauts celebrated their Grey Cup 109 win with their biggest fans, giving a team that went through its share of ups and downs this season a picture perfect ending.

That ending is always the quiet part of these days. The celebration is first and foremost and through this week the Argos have gotten some well-earned, much-deserved time in the sun (Toronto’s Thursday morning fog aside. Henoc Muamba has been the face of the team in that span. The Grey Cup’s MVP and Most Valuable Canadian rubbed elbows with Toronto mayor and former CFL commissioner John Tory on Thursday morning, after he’d brought the Grey Cup to Maple Leafs and Raptors games earlier this week.

“I’ll never get tired of that,” Muamba said of the attention that’s come to the team this week.

“I’m going to have to fight…to hold onto this Grey Cup for a little longer. It’s one of those feelings that you can’t get tired and never get used to. It’s extremely special.”

Through the Lens: Argonauts Championship Rally

The city-wide love is something that this Argos team has been more than deserving of in its last two seasons. While there were questions about the strength or lack thereof of the East Division’s teams this year and questions about the Argos’ ability to stick together when things got tough, they answered them both definitively in their dramatic dethroning of the two-time defending Grey Cup champion Winnipeg Blue Bombers.

Thursday was the Argos’ time to bask in their success and to let anyone that may have doubted them along the way that they were wrong about them. They earned that right.

Muamba took a moment to remind people that this team from mild-weathered Toronto was able to handle the cold in Regina on Sunday, stripping down to his undershirt to prove his point. General manager Michael ‘Pinball’ Clemons told the fans at Maple Leaf Square that he knew head coach Ryan Dinwiddie had the pedigree of a championship coach back in 2020. DaVaris Daniels, like so many of his teammates, went to bat for his quarterback McLeod Bethel-Thompson, who has faced heaps of critics in his year-and-a-half as the team’s starter.

That shiny, 109-year-old trophy that sat on the stage is the key to the door of I-told-you-so swinging wide open.

Bethel-Thompson, his thumb still wrapped after its dislocation in the fourth quarter of Sunday’s action, was a virtual participant in the celebration. He opted to get home in time for American Thanksgiving, to spend the holiday with his wife and their young daughter.

“For the first time I get to choose them,” he said.

“I miss my brothers. I’m sorry,I couldn’t be there. I appreciate everyone for the journey that we’ve been on. I was so lucky in 2017 to be on the journey to go get that Cup,” he said of the Argos’ 2017 Grey Cup-winning squad.

“I knew when I saw that brotherhood, I knew that I could build something like that. I knew I could build a championship team like I saw in ’17. It took a long time. I thank Pinball and I want to thank Ryan Dinwiddie for believing in me and giving me the keys this year. When you have a team like we have, those brothers, those great, great men. It makes it easy.

“We had a chance to sit down as a family (on Wednesday) and talk as players. Each and every one of them sacrificed something. Everyone played a role and everyone won that championship.” 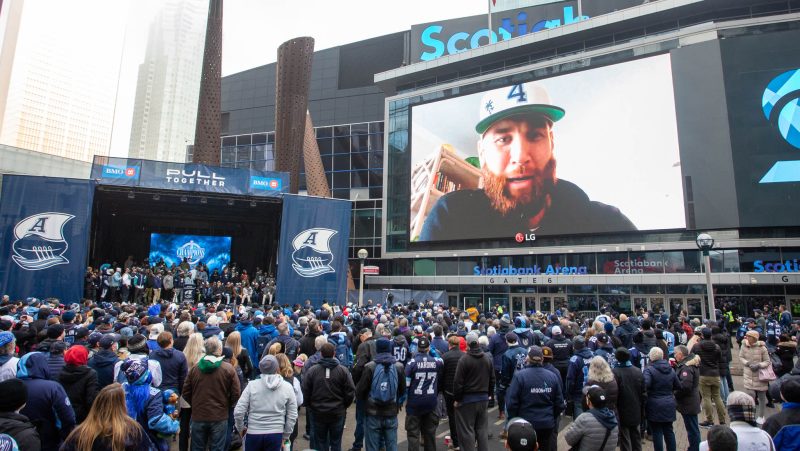 McLeod Bethel-Thompson joined the Argos’ Grey Cup rally virtually, after flying home to be with his family for American Thanksgiving (Chris Tanouye/CFL.ca)

Bethel-Thompson and Muamba head up a leadership group that could look very different when the Argos’ training camp opens in 2023. Bethel-Thompson will consider his football future, as will veteran running back Andrew Harris and receiver/returner Brandon Banks. The Argos, like the other eight teams in the league will have a long list of free agents that Clemons and his staff have already started evaluating and prioritizing.

There’s a last day of school kind of feeling to a championship celebration. As joyous as it is, it’s also the last time that this group as it stands will be together as one. The championship is celebrated, Muamba said, but there’s more to it than that.

“We’ve grown so much. We’ve evolved as human beings, as individuals as teammates, as husbands, as boyfriends as fathers. I want the guys to really learn and hold on to the lessons that they’ve gotten this year and continue to build on it for the rest of their lives.”